We’re here at the track, looking on at what F1 hopes to bring to America year after year. 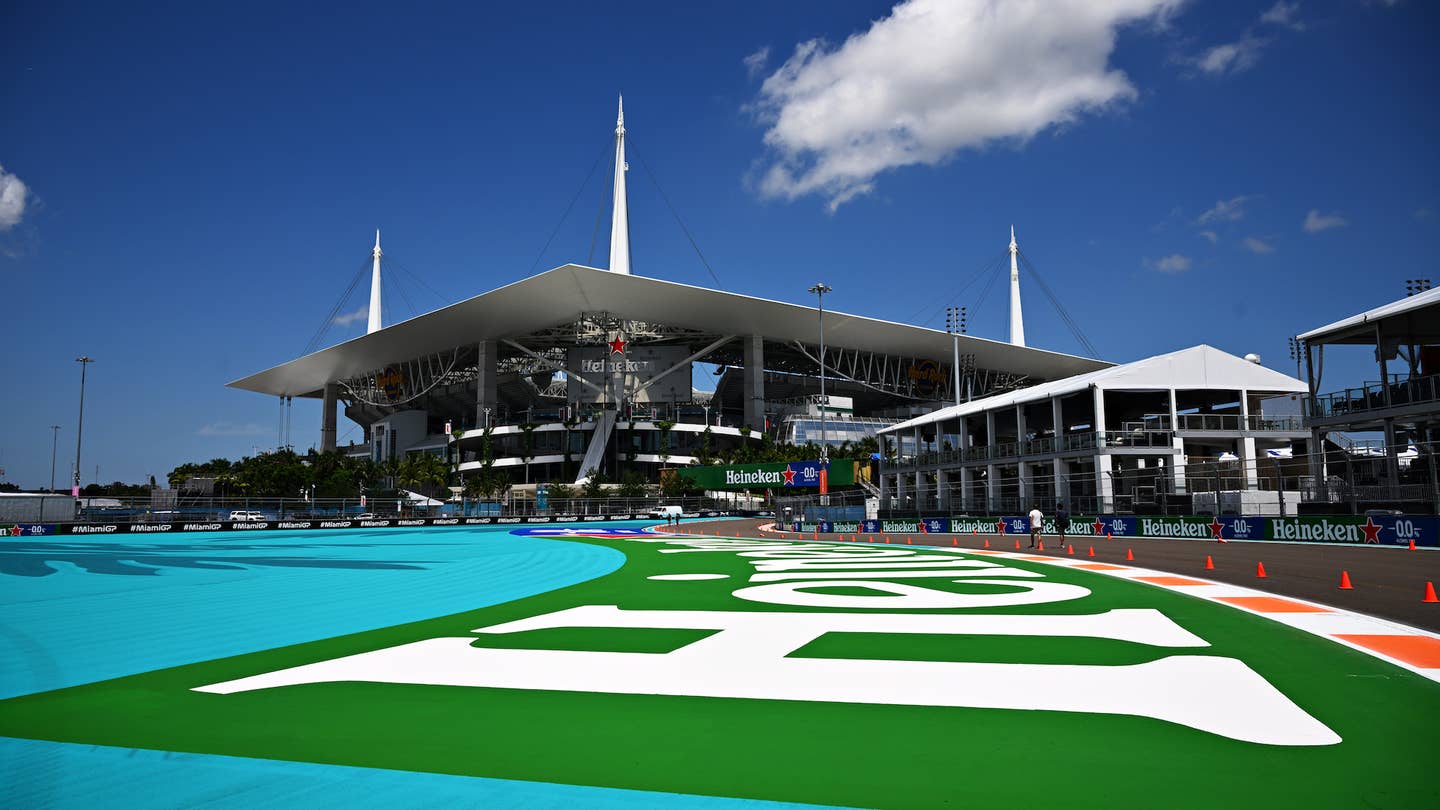 Say what you want about it, but the inaugural Formula 1 Miami Grand Prix is finally here. The United States is officially holding the first of its two F1 races in 2022 this weekend, and if things go as planned in Las Vegas, that number will grow to three next year. Like most brand-new motorsport venues at home and abroad, there are good chances that not everything is 100 percent, whether it be the fit and finish of the racing surface, track infrastructure, fan zones, or what have you. So far, the biggest fail (and attention-grabber) in Miami has been its fake marina filled with fake water, but gimmicks aside, this weekend is a big deal for American racing fans and F1 in general.

Allow me to explain with a bit of history first. Rumors that Miami was looking to host an F1 race have circled the internet for a long, long time. Things got more serious about five years ago when local government officials and a few entrepreneurs low-key approached Liberty Media, the commercial rights holder of F1, who had just taken over from Bernie Ecclestone a year earlier. The U.S.-based company was looking to grow its fan base domestically, but it had bigger fish to fry at the time, so it sort of put Miami on the backburner until city officials, promoters, and locals figured out whether they really wanted to make the GP a reality. By early 2020, the original downtown layout for a street race had been abandoned with promoters pitching Hard Rock Stadium, home of the NFL's Miami Dolphins, as the possible venue for the race.

Not long after that, Miami Mayor Francis Suarez got involved with the project and helped negotiate a deal to bring F1 to his neck of the woods. And as they say, the rest is history. Or, as Mayor Suarez said to me, "having an F1 race in Miami is like hosting the Super Bowl every year."

Now we're here in Miami Gardens, a few minutes north of the world-famous Miami Beach nightlife, standing on what's now called the Miami International Autodrome. No, really, I'm standing here right now. The entire complex was essentially created from scratch in a little over 12 months, given that the GP didn't become official until April of last year. It measures 3.36 miles and features 19 corners ranging from tight chicanes to long, high-speed sweepers. This year, there will be not one or two, but three DRS zones that should result in an average speed of around 139 mph.

Touted as a hybrid F1 track—though not the first hybrid track, as Will Buxton tweeted, because Montreal and Melbourne did it first—the South Florida racecourse and its pit complex are permanent while the facilities around it can be mantled or dismantled depending on the needs of a particular event. The track's layout itself was an exercise not just in design, but also in engineering in order to accommodate the many mandatory safety requirements regardless of whether it's temporary, permanent, or hybrid. According to F1, a total of 36 different layouts were simulated before picking a winner.

As I sit here and type about the track's layout, its fake little yacht club, and the fact it lives in the shadows of a stadium that hosts a sport that's the blue-collar antithesis of Formula 1, the truth is that in the cash-rich, glamorous world of F1, almost none of this matters. Why? Because it's fast cars made by fancy automakers converging in the global hotspot that is Miami. Fun in the sun for the rich and famous, that's what the Miami F1 Grand Prix is all about. That's why when someone eventually complains about the lack of port-a-potties for the general admission folks, the venue's management likely won't give a damn because it'll be too busy trying to find a few more truckloads of Dom Perignon for the Paddock Club.

Further amplifying the race's popularity is something that really no one could've predicted: the COVID-19 pandemic. Today, whether you still social distance, wear a mask, or have just said fuck it and truly embraced the YOLO lifestyle, people want experiences again. Now more than ever, it's not enough to just watch an F1 race on TV—you gotta go to it. Because for nearly two years, we were all exposed to severe risk of death in one way or another, so why not live a little? Buy that ticket, rent that exotic car for the weekend, splurge on that VIP pass, get plastered drunk at a club where they put sparklers on champagne bottles. Folks are spending heavily on experiences, and businesspeople in Miami are well aware.

Lastly, Miami is a big deal because it's a culmination of two hugely important things happening in F1 right now: Netflix's Drive to Survive and Max Verstappen. DTS has played a crucial role in exposing average Americans to F1 and that's a proven fact. The U.S. GP in Austin last year was an overwhelming success, officially becoming the biggest F1 race ever in terms of attendance, and I can guarantee you that didn't happen because a bunch of gray-haired old men came over from Europe. No, I was there, and I witnessed the legions of young American fans injecting F1 into their veins that weekend.

And then there's Red Bull's Max Verstappen, the driver many of us love to hate and hate to love—myself included. He took the challenge to Mercedes and Lewis Hamilton, a combo that went essentially uncontested for years, and won. The 2021 season was thrilling, and 2022 is again, albeit with different players at the very top. Four races in and a Ferrari driver is leading the championship while two Red Bulls trail behind.

For all of this and more, the Miami F1 Grand Prix is an enormous deal, not just to the United States but also for F1 and its money daddies at Liberty Media. If the sport wants to survive—especially as those European legacy fans phase out—it needs to explore new markets, tap into younger age groups, and dominate the airwaves. Miami and, in due time, Vegas aren't just good additions to the calendar; they're means of survival.