Live out your billionaire child’s dreams on an empty airfield. 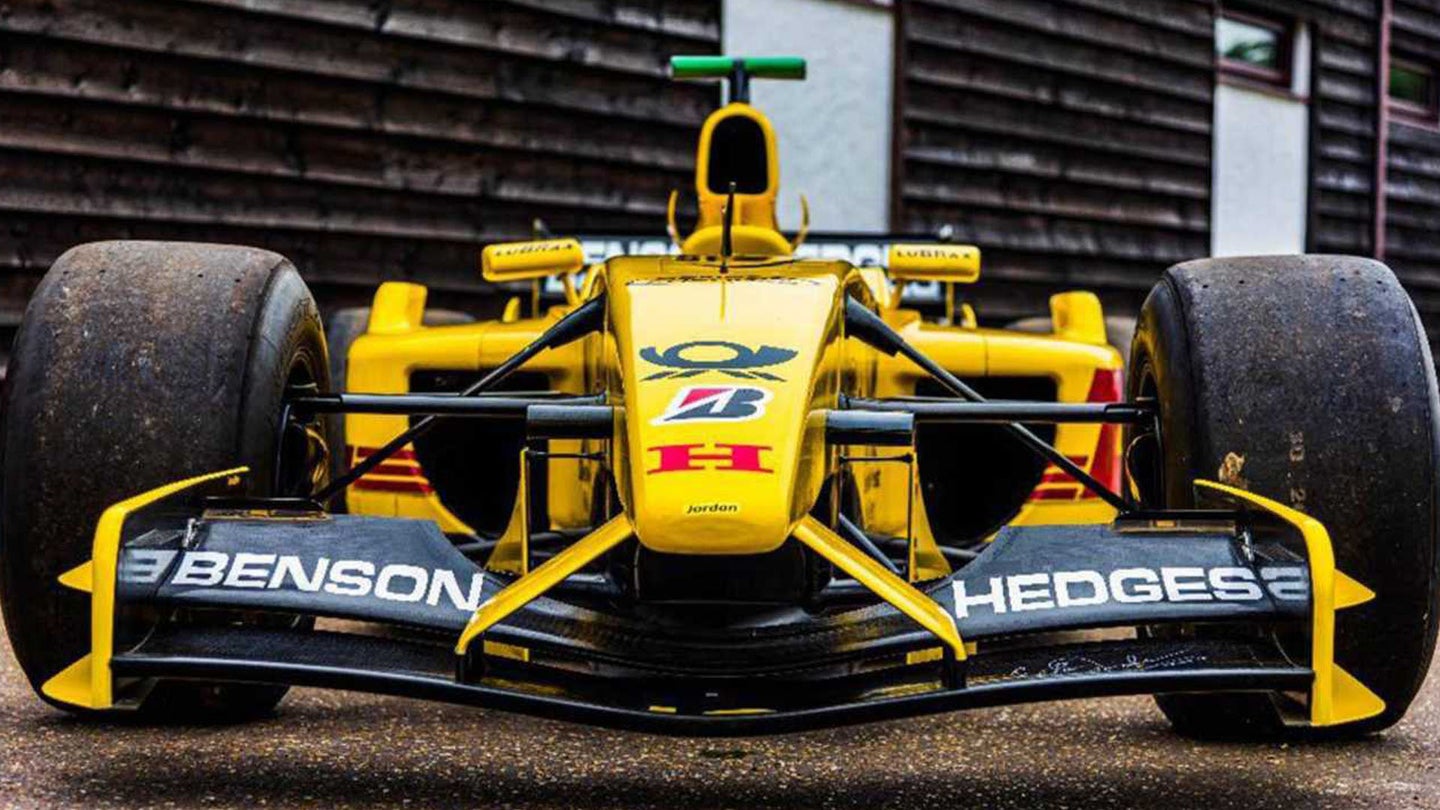 Normally, you either have to be very good at driving or at least very decent at driving and have a billionaire dad to pilot an F1 car. But U.K.-based Trackdays has refitted a genuine, race-driven Jordan car to be usable by the public on specially structured track days. All you have to do is pay a little bit of money and earn their trust that you won't slam it into a wall at speed.

The chassis is the original EJ12, raced by two-time Indy 500 winner Takuma Sato at the start of the 2002 season, and it retains the bright yellow DHL livery that's iconic to the Jordan cars. It's the only EJ12 chassis in existence that's drivable.

F1 cars require an engineering team to drive and the most basic package involves a full day of training—over five hours—before you get the chance to wheel the car in earnest. It's also not cheap, which is understandable given all the moving parts required to make everything happen. For £999 ($1,365) their website says you get 44 training laps over various cars, including twenty in an F1000 single-seater, culminating in 10 laps in the F1 car. More extensive packages go up to £3,750 ($5,124) for up to thirty laps in the F1 car.

The track days all take place at Bovingdon Airfield in Hertfordshire, England, a former military base now used for filming and vehicle testing, including race cars.

The Honda V10 engine the car raced with has been replaced with a 3.0-liter Judd, reducing its power from 835 brake horsepower to 600 bhp. The bodywork of the car has had to be adjusted to accommodate the new engine, especially over the engine cover.

In a press release, TrackDays manager Dan Jones said it was still a pretty exclusive opportunity to drive a race-tested F1 car. “It’s very rare to have the chance to drive a genuine F1 race car that was driven in anger in the world’s foremost motorsport championship," he explained. You won't find anyone arguing here, especially considering that—hey—none of us have driven a top-flight open-wheel racer before.

It normally costs inconceivably gigantic amounts of money to get a special coaching day, and you've also got to pay the crew to keep the thing running properly, so a mere four figures is pretty fair.

TrackDays said, “Unsurprisingly, our Jordan F1 driving experiences are some of the most premium packages we offer. However, when you consider that it could cost up to £250,000 ($341,670) to own a genuine model, plus the astronomical running costs, then these driving experiences in them are a real bargain while still enjoying a once-in-a-lifetime thrill.”

Of course, not all F1 cars cost that much. Manor's asset sale auctioned off theirs for just $65,000 but you'd still need to find an engineering squad to help you start it, let alone run it on-track.

Spencer Pigot’s massive crash with just four laps to go helped his chances, but it was still his race to win.