Home to Australia’s V8 Supercars, the Mount Panorama Circuit is fast, tight, and easy prey for the Brabham BT62. 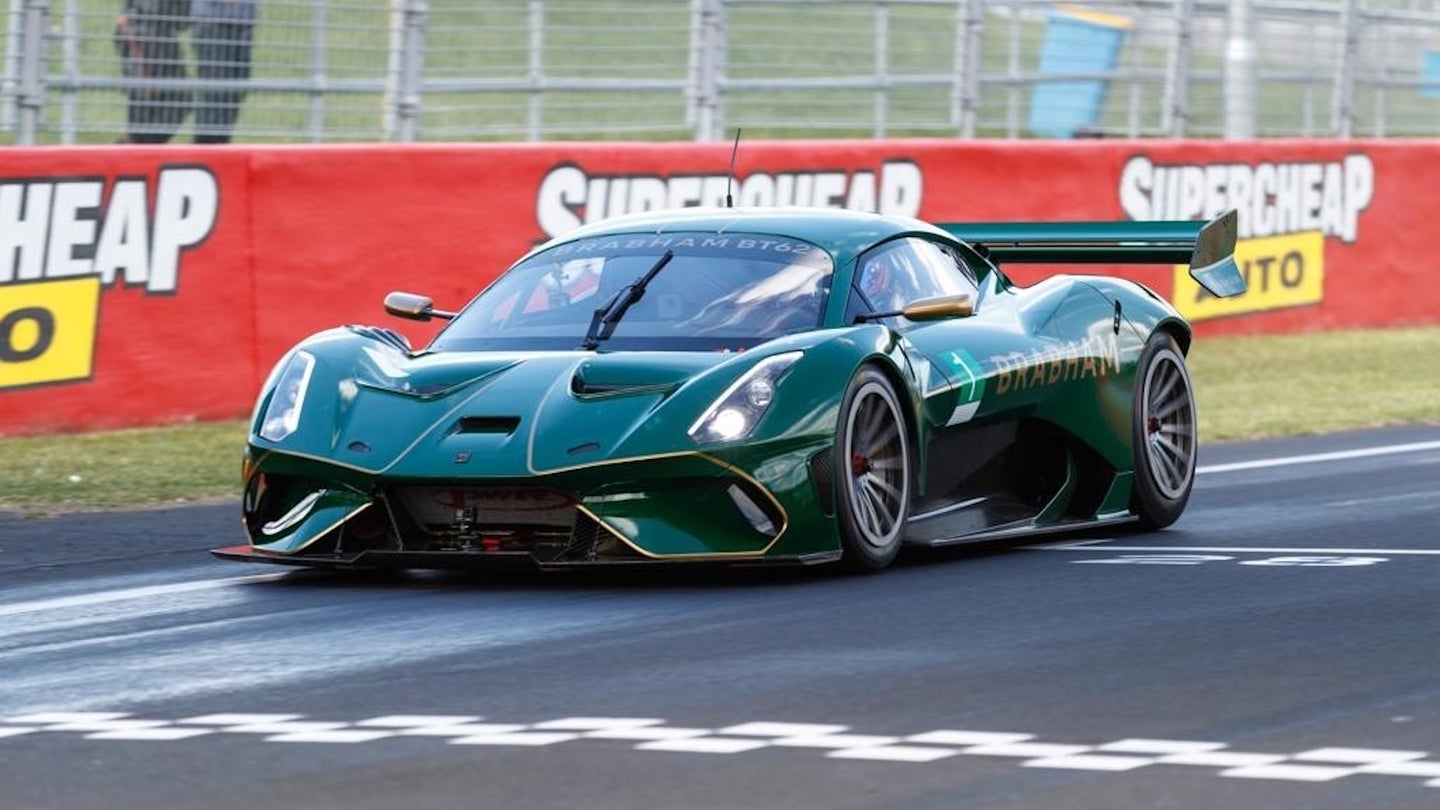 Mount Panorama Circuit is the site of the 12 Hours of Bathurst endurance race, and hosts the crown jewel race of Australia's premier touring car series, V8 Supercars. It is loved by fans and drivers alike for its long straights, narrow confines, and extreme elevation changes. Its unofficial closed-wheel lap record of 1:59.29 was set in 2018 by an unrestricted GT car, but as of Saturday, that record has been rewritten by the Brabham BT62.

Brabham's BT62 is a track-oriented supercar, and a symbol for the Brabham family's racing dynasty, which it seeks to rebuild. It has a primarily carbon fiber construction, extreme aerodynamics, and a 5.4-liter, naturally aspirated V8 that thumps out 700 horsepower. Only 70 cars will be built, and Brabham can make the car road-legal for a fee.

V8 Supercars race winner Luke Youlden took the BT62 out for a short four-lap stint around Mount Panorama on Saturday and found track conditions favorable for a hot lap. During this drive, he clocked an independently verified 1:58.67, or 0.621 seconds faster than the aforementioned GT car, and almost three seconds quicker than the race lap record.

"I've driven a lot of GT cars round here, but the Brabham BT62 is on another level. It's a racecar and it feels like a racecar," said Youlden. "The car feels planted and gives you great feedback through the steering wheel which gives you the confidence to keep pushing. It's light at only 972 kilograms [dry weight] and it sounds amazing. To be the lap record holder around such an iconic circuit is a dream come true and I’d like to thank all the guys at Brabham Automotive for creating a car that made it possible."

"Today's lap record for the Brabham BT62 demonstrates the performance in the DNA of this car," added chief test driver David Brabham, winner of the 2009 24 Hours of Le Mans. "Having been an integral part of the test team, I never doubted the car could do it, and I want to congratulate Luke for taking it there. For us, this is all data-gathering, stress testing and general learning as we continue our journey back to Le Mans."

Indeed, Brabham has aspirations not only to return to international racing, but also to producing road-going sports cars. Its planned 2022 Le Mans entry will be derived from the BT62, and compete in the GTE class. The automaker confirmed to The Drive that this vehicle will too be offered in road-legal form, but as its competitive debut won't be until 2021, expect the road car to be about as far off.