How to Drive One of the World's Most Savage Road Courses

Like most things in Australia, Mount Panorama Circuit wants to kill you. 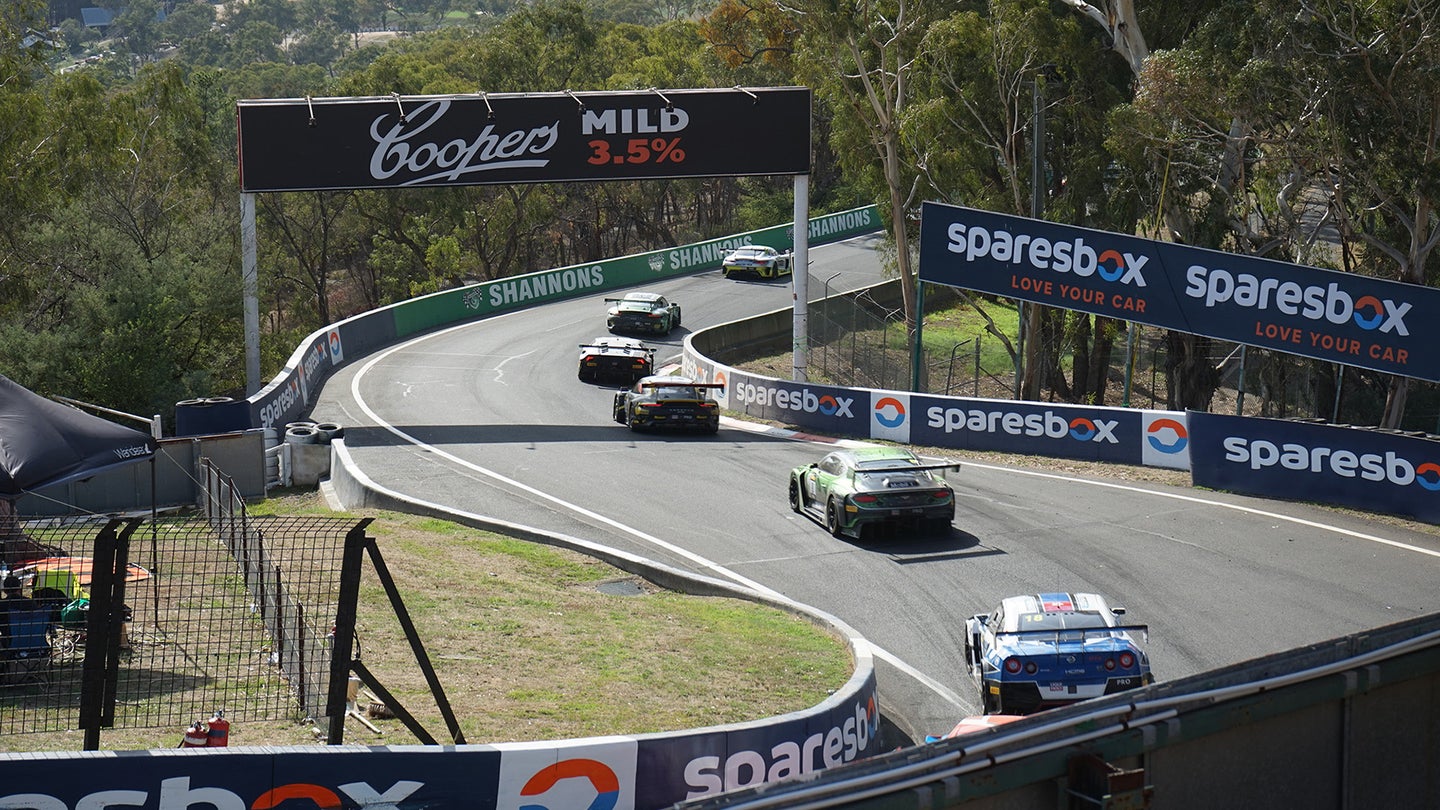 Out there in the sun blasted foothills on the wrong side of the globe, draped over the wrinkled edge of Australia's Great Dividing Range, the Mount Panorama road circuit is the stuff of legend. Known worldwide as the stage for the annual Bathurst 12 Hour endurance race and Bathurst 1000 championship, its 574-foot elevation change, length, blind corners, and...well, everything make it one hell of a scalp for racers and track rats.

There’s little in the way of runoff along its 3.6 miles of coursing pavement, so mistakes are punished quickly and savagely. Every corner leaves drivers guessing what’s on the other side: A spun car? A marauding kangaroo? A very bad crash? It could be any of those, and more. But much like any excellent track, the feeling you get following the tarmac thread from turn to turn is powerfully addictive. To drive it once is to unlock a deep-rooted urge to spend a lifetime mastering it—on Gran Turismo or in real life.

So as a public service more than anything else, I thought it important to put together this guide on mastering Mount Panorama, with tips and advice from pro racers who really know it. After all, the track is made up of public roads that you can show up and drive any time (at the speed limit, of course!) when there's not an event going on. But that doesn't mean this is place where you just barrel in and see what happens, as GT3 racer, Australian TV host, and overall enthusiastic human being Grant Denyer made clear. Quite the opposite.

"Mount Panorama is a vomit-inducing excitement machine. It gives you all of the emotions. It's a very incredibly unique bit of tar, because it's on a mountain. It's a freaking mountain. It's got a climb of one in six, which is like Everest," he extolled. "It's got a roller coaster mid section over the top, which is high-speed, blind, off-camber and just wild. And then it's just got this most spectacular view and it just has this energy about it that is compelling for any race car driver in the world. Its global reputation is enormous, but it's tamed many a man."

That last sentence is accurate. Check the below video of crashes at Bathurst during the 2018 race—15 full minutes of crunchy slides and expensive impacts.

Sixteen drivers have lost their lives behind the wheel here over the decades. Denyer’s not shy in expressing just how scary it gets. "The bottom half of the circuit is more like a traditional circuit. The top half is more like going on a hike at [127 mph]. So, you attack turn one traditional, it's a traditional 90 degree corner, not much to it. Hit climb up a huge straight, which sets the tone for what's about to happen to you. So, that's the moment where you tighten your belts, take a gulp. You have that last minute breath, because you're probably not going to breathe or blink for another minute and a half to two minutes."

He's talking about Hell Corner and Mountain Straight on the map above, the last bit of relative normalcy before the course turns into a wheel-to-wheel hillclimb through The Cutting, Quarry Corner, and Reid Park, a fast and tight sequence leading to the track's highest point at Sulman Park—a full 574 feet above the start/finish line. It's all downhill from there.

Dom Storey, who raced with 59 Racing and its McLaren 720S GT3 car at the 2020 Bathurst 12 Hour (the team won its class), has been round Mount Panorama more than a few times, and he spoke about the top of the mountain with reverence.

"You’ve got that section heading up the mountain through The Cutting, then up through the top, through the trees, passed the Grate [Ed. note: a literal drainage grate on the road that can catch drivers out], over Skyline, then down the hill, down The Dipper... all that section the car’s going from one side of the track to the other," he said. "That part of the circuit is probably one of the most difficult bits of road anywhere in the world, I think, because any small mistake and you’re probably going to end up in a bit of strife."

Much like almost everything in Australia, Mount Panorama seems to want to kill you at every available opportunity. But less so now than it used to, according to Mark O’Connor, Motorsport Manager for Lotus Cars Australia. "It’s a six kilometer race track with 170 meters of elevation change. What could go wrong with that recipe? It’s awesome! The layout has mostly been the same since the thirties. Luckily, it's now surrounded by walls. There were some big accidents here with people running off track and hitting the gumtrees."

The tight walls may be scary for most, but O’Connor’s advice is to embrace them, to drive as close to them as you dare and get used to them. Something like exposure therapy for racers.

The track’s origin story is as good as you'd expect for such a wild ride. Back in the 1930s, the mayor of Bathurst (a man named Griffin, whose sobriquet graces turn two) decided he wanted to build a driving circuit near town stretching up into the nearby Bald Hills. His initial proposal was turned down, so instead he asked the New South Wales government if he could build a ‘scenic drive’ around the area—and they said yes, the suckers. A few months after construction was finished, local car clubs obtained permission to start using the road as an occasional race track, and it's been the Mount Panorama Circuit ever since.

For Storey, the downhill portion is where the most time can be lost. "Going up the mountain is okay because naturally you get a lot of extra grip with the car... but as soon as you drop over Skyline and heading along the downhill section, that’s where you can make mistakes and you can end up in a mess."

But his advice for newbies is sage: “You have to respect the circuit as it is. You have to give this place respect, not go out too hard too soon because you can come unstuck very quickly.”  Much like most things in life, you can’t expect to be an expert straight off the bat.

"If you wanted to come drive here, you need track knowledge," said Bentley GT3 driver Al Buncombe, a British Bathurst veteran, echoing Storey’s advice. "Get yourself on a really good sim. That’s what I did and I learned the track. You can’t beat it."

Consensus, then, is that Bathurst is a track to be respected as much as enjoyed. That its lower section affords moments of peace before you grab yourself a deep breath and tackle the huge elevation change and the blind, off-camber, and possibly kangaroo’d corners.

"Every corner [at the top] is a blind crest, that could also be off camber," Denyer summed it up. "So, the worst of the worst combination of corners."

Doesn’t that sound cheery? A legitimate question hovers over all this: If Mount Panorama is so hairy, why on earth do people yearn to tackle it? One, it’s scarcely open to the public at full chat, so there's a real rarity to it. But for racers, especially Australian racers, there's the history of the place. The Bathurst 1000 is known as The Great Race in the Antipodes, a cultural event akin to the Daytona 500 in America. F1 cars, touring cars, motorcycles, modern GT3 endurance machines, supercars—pretty much everything has been raced there over the decades, all on the same terrifying combo of twists and turns.

It’s unforgiving and technical. There are even parts where, thanks to sharp crests, race car aero simply doesn’t work. You want to get round as fast as possible, but the mountain doesn’t seem to want you there at all. How appealing. Denyer describes finishing a lap after all the work that goes in to nailing one most eloquently: "You’ve survived this one, will you survive the next?"

So how do you drive Mount Panorama? Respectfully and carefully...at first.