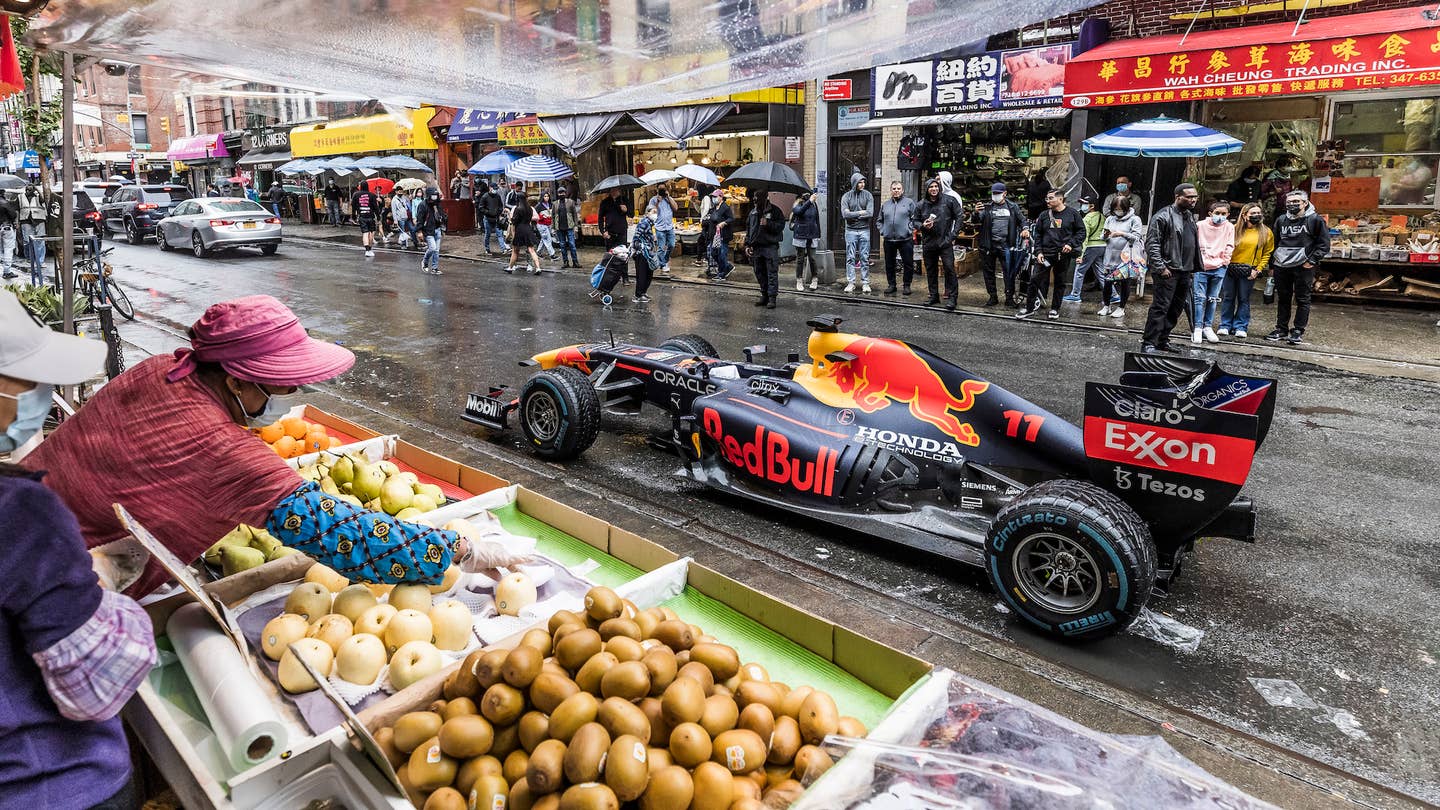 The inaugural Miami Formula 1 Grand Prix is happening just 19 days from now—at least, that's the plan unless some locals get their way—and some of F1's biggest names are busy promoting America's newest grand prix. Mexican racing driver Sergio Perez is doing exactly that today, with the release of a hilarious video that portrays him "road-tripping" to Miami all the way from New York City. His ride of choice? The Red Bull RB7 F1 car.

First, let's get this out of the way: Checo doesn't actually drive the F1 car all the way down the eastern seaboard. And sure, every single second of the 11-minute video (yes, the length matches Checo's racing number) is carefully staged and choreographed. But that doesn't mean it's not highly entertaining. From getting a parking ticket in Manhattan's Chinatown to encountering a massive alligator in the Florida Everglades, Checo has to deal with all kinds of silly situations on his way to the "Miami International Autodrome," which is a very fancy nickname for the Miami Dolphins' parking lot.

The clip is good enough for me to actually encourage you to spend minutes of your life watching it, but in case you don't want to do that, here's the summary. It all starts with a misunderstanding between Checo and Red Bull F1 boss Christian Horner, which leads Checo to believe he had to be at the Miami track "today," instead of "in May." As a result, he summons his pit crew in an Anchorman-like fashion and heads out to the rain-soaked streets of NYC where he whips the car around famous landmarks on his way to a store to grab a Red Bull drink. Because ad placement, of course.

For what it's worth, you should know that this particular machine isn't Checo's actual F1 car—per the FIA, they're not allowed to do that. The RB7 dates back to the 2011 season, which explains the gorgeous screams from a Renault V8 engine revving to its stratospheric rev limiter.

After getting a parking ticket in Chinatown, Checo magically pops up on a dirt road in the Everglades which is coincidentally blocked by what Red Bull describes as an "11-foot-long alligator." Luckily, Red Bull athlete and professional wakeboarder/barefoot water-skier Parks Bonifay manages to shoo the away creature and hooks up a line to the back of the F1 car. Now, I'm not sure if this is the first case of barefoot water-skiing behind an F1 car, but there's a good chance that it is.

The video wraps up with Checo arriving at the site of the upcoming Miami F1 Grand Prix, where he proceeds to do a few runs through some sectors of the track—which admittedly look unfinished, but then again, it's unclear when this was filmed. The final scene shows Horner finally getting a hold of Perez on the stadium's jumbotron, explaining that he's only a wee bit early to Miami.

Sure, it's a cheesy flick, but I can appreciate Red Bull's initiative to let loose and bring a smile to old and new F1 fans alike. That, after all, is what matters. Don't forget, the Miami race is coming up and The Drive will have boots on the ground, so stay tuned for the latest from F1's newest destination.