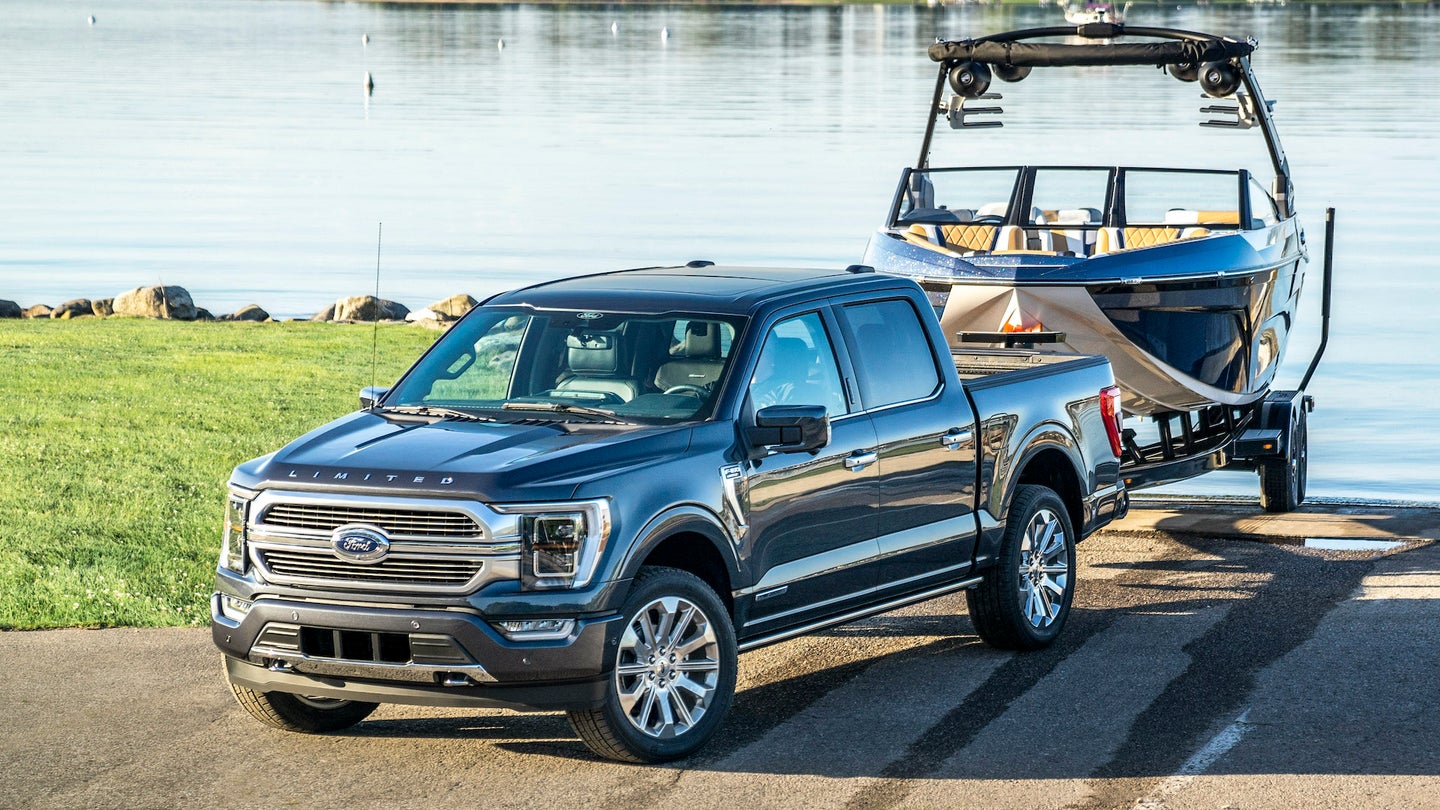 America's favorite vehicle is indisputably the Ford F-150, and when Ford reveals a revamped version of its bestselling pickup like it did today, the entire world stops to stare. And the world has extra reason to gawk this time around because the 2021 F-150 has changed more substantially than any model prior. It'll have interior and tailgate workstations, a wirelessly updated new Sync 4 infotainment system that speaks Apple CarPlay and Android Auto alike, and late next year, the ability to drive hands-free on over 100,000 miles of American highways. But most importantly, the F-150 will, at last, be available with a hybrid powertrain, one which Ford says should offer "the most torque and horsepower of any light-duty full-size pickup."

Potentially fulfilling that promise will be Ford's new PowerBoost drivetrain, which is more or less the proven 3.5-liter, twin-turbo EcoBoost V6 with a 47-horsepower electric motor grafted on. It deploys power from a 1.5-kilowatt-hour lithium-ion battery embedded between the frame rails near the rear axle, which is in turn recharged under regenerative braking. Their combined power (which Ford hasn't yet disclosed) travels through a 10-speed automatic transmission to either the rear wheels or, via an electronically actuated transfer case, all four.

Ford hopes the PowerBoost's added efficiency will turn its 30.6-gallon tank into 700-plus miles of range, which equates to just under 23 mpg, or four better than a 2020 EcoBoost V6 model. That won't come at the expense of capability either, as Ford targets at least 12,000 pounds of towing capacity for 2021 F-150s equipped with the Max Tow Package.

Opting for the PowerBoost motor will also enhance one of the new F-150's cleverest upgrades—the available Pro Power Onboard system. This 2.0-kW onboard generator is adequate for powering a terrific tailgate setup, and on PowerBoost models, its output is upgraded to 2.4 kW, split across quadruple 120-volt outlets. That's enough to power a mobile movie projector setup for up to 85 hours on a full tank, and that's only the intermediate of the three such systems available.

Ford will let you upgrade PowerBoost-equipped models to a 7.2-kW system that adds a 240-volt, 30-amp socket, whose total power output is enough to theoretically run a mobile TIG welding workshop, complete with a mini-fridge and AC unit. It's also enough to run an electric two-post lift, meaning the new F-150 might be capable of supporting a complete mobile mechanic bay—and if the frame can't take it, a trailer surely can.

Ford will allow buyers of every trim from the base XL to the top-shelf Limited access to the PowerBoost hybrid engine when the 2021 F-150 goes on sale this fall. No plug-in hybrid (PHEV) version of the next-gen F-150 is expected, as Ford will completely skip this interim step to launch a fully electric F-150, which could debut as soon as November. Given the delays forced on the auto industry by COVID-19, however, it may be more realistic to expect a reveal sometime in 2021 and launch for the 2022 model year.