The limited-edition Maybach by Virgil Abloh is limited to 150 units worldwide, with a few units reserved for the U.S. 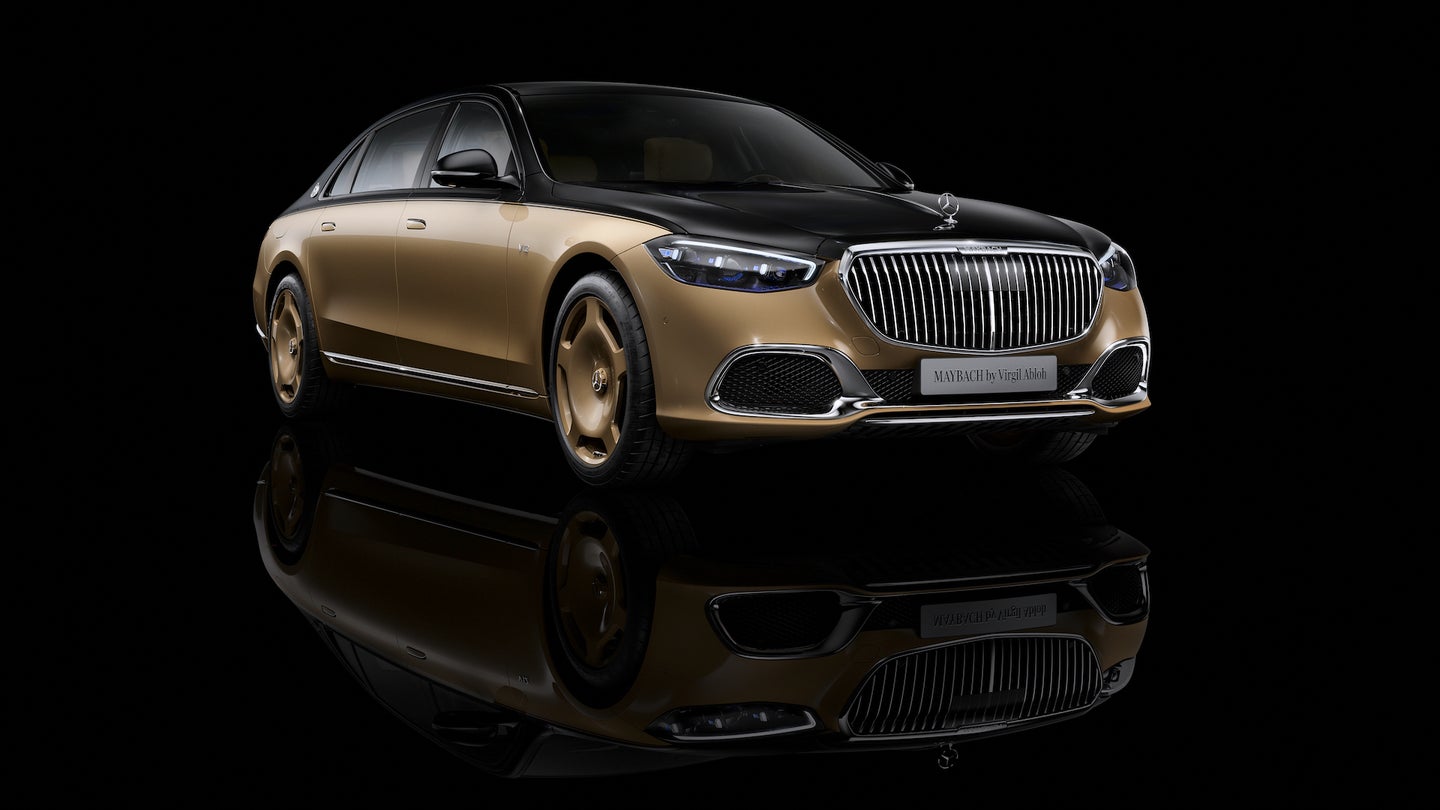 The previous automotive works of fashion and design icon Virgil Abloh were mostly one-off showpieces, especially this rad Safari Maybach. That changes today. Confirmed Tuesday morning by the German automaker, a special edition of the 2023 Mercedes-Maybach S680 dubbed "Maybach by Virgil Abloh," will go on sale worldwide later this year. Only 150 units will be produced, with only a fraction of those expected to reach the American market.

The unique Maybach is adorned in a traditional two-tone palette, with the top remaining the quintessential Obsidian Black found in most Maybach builds, while the lower portion and wheels are treated to a one-off hue. Inspired by Abloh's previous creations, the gold-like Sand color is applied throughout the car, covering all four sides of the vehicle. Furthermore, Sand is also applied to the gorgeous monoblock wheels that have become synonymous with the new-gen Maybach. It goes without saying that Sand is an exclusive hue to this limited edition, and will not be available in other "normal" Maybachs.

The enhancements continue inside the spacious cabin, where an identical color scheme is followed, essentially splitting the top and lower portions of the interior in a similar fashion to the exterior of the car. You'll find that most of the dashboard and top of the doors are finished in black leather and piano black surfaces, which continue into the black headliner for a luxurious look and feel. From the beltline down, the interior is finished in a version of the Sand color that's been adapted for the interior. Other bits and pieces like bolsters, seatbelts, and the many storage panels scattered throughout the cabin are also finished in piano black. The high-pile floormats, however, are conveniently done in Sand instead of Obsidian Black, because that wouldn't be hard to upkeep, or anything.

That's not where the unique touches end, as more badging and customizing is done throughout the cabin and even within the MBUX infotainment interface. The main console cover between the two front seats—which is admittedly over a foot long—features a special, inscribed logo commemorating the milestone model, though it's unclear if this plaque will reflect a serial number or which number unit that particular car is out of total production. A similar motif is scattered across the headrests, pillows, center console, and window frames.

Circling back to the MBUX modifications, the center touchscreen and the digital gauge display are enhanced with a new Sand-colored theme, which also features new images for specific icons, profiles, and functions of the vehicle. For example, several icons or app graphics are replaced with images of luxurious fashion accessories, further bringing the driver into Abloh's world. Based on a quick look at the photos, these appear to be some of Abloh's most recognized design patterns, such as crosses, the Off-White logo, and others.

Lastly, all 150 lucky owners will get one more special touch with their purchase: "a special custom-made wooden box" finished in Sand Nappa Leather with the Mercedes-Maybach and Virgil Abloh logo. Inside, they'll find a special, 1/18 scale replica of the limited-edition car plus the actual car's two key fobs on a one-off keychain. Separately, the car will come with an emblazoned car cover to make sure it remains dust-free while it's not in use.

The 2023 Mercedes-Maybach S680 by Virgil Abloh remains untouched mechanically, meaning that it features the same 6.0-liter V12 engine that produces 604 horsepower. I recently had the opportunity to test the S680's little brother, the S580, which features a 4.0-liter twin-turbo V8 with 496 ponies. You can read the review here, and find out why I called it the peak of the modern automobile.

Though the gaudiness that landed old Maybachs in rap music videos is long gone, today’s cars have still got plenty of pizzaz in their soul.

Abloh, one of fashion’s most celebrated artists, passed away on Sunday at the age of 41.