Obnoxious BMW Owner Ordered to Pay Over $5,000 to Annoyed Neighbors

Sued by his neighbors, the driver will pay damages for his loud and reckless driving. 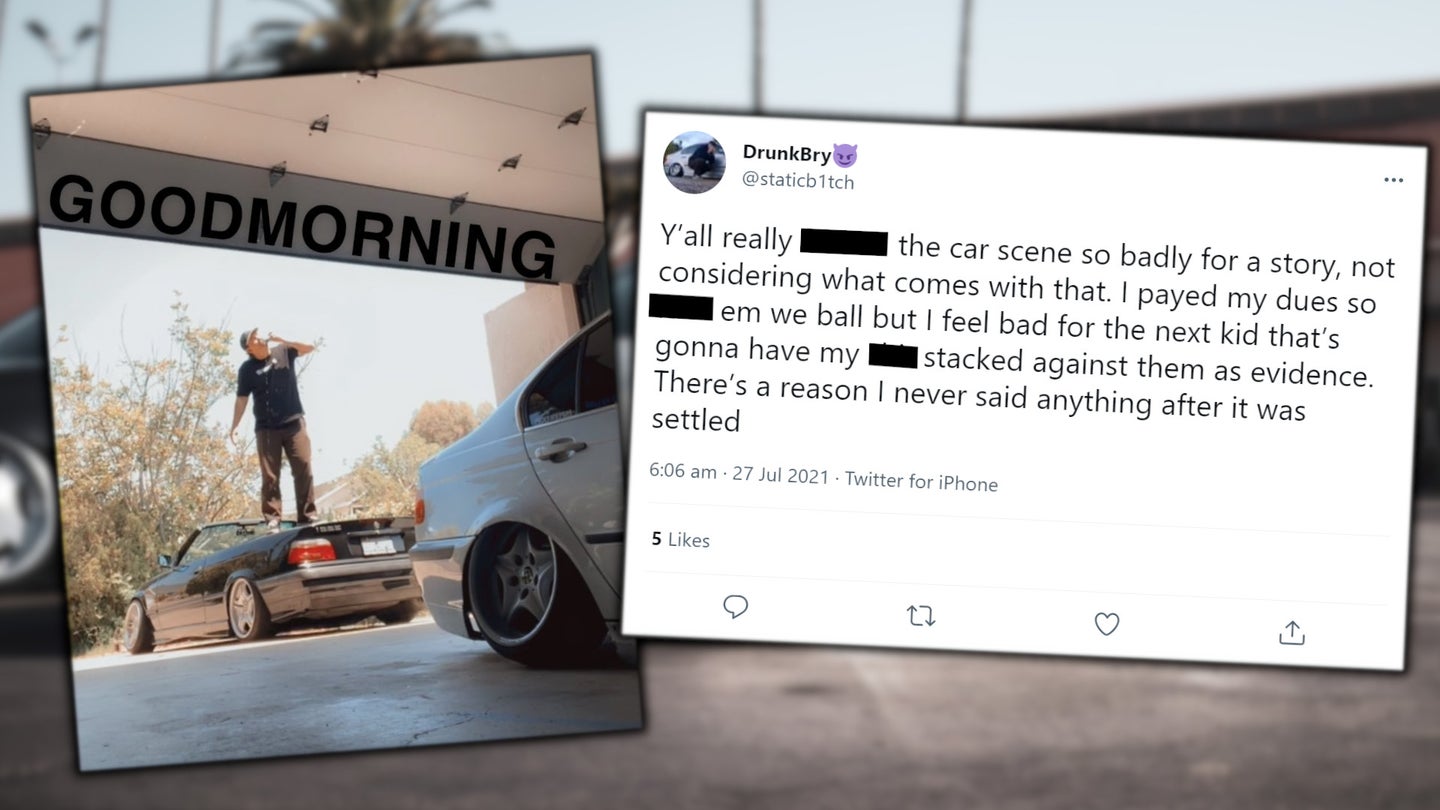 Most neighborhoods have that guy—the one that drives a fully sick lowered car with an ear-splitting exhaust, capable of waking up all but the soundest sleeper when they cruise around the streets. Often, it's just one of those things you learn to live with in the suburbs, but for some, it can be altogether too much. Back in May, we reported the case of Bryan Hillman, aka @staticb1tch, who was being sued by his neighbors for disturbing the peace. Those lawsuits have gone to trial, and Hillman is out over $5000, reports Tire Meets Road.

The primary lawsuit, demanding $10,000 in damages, was brought by a homeowner living across from Hillman, claiming that his noisy cars and driving style ruined the "quiet enjoyment of their home over a five-year period." Further allegations alleged Hillman had used "verbal assault" and attempted to intimidate the homeowner in past interactions. The neighbor over Hillman's back fence got involved too, filing a suit for $5000 on the basis that “Hillman’s behavior interferes with the quiet enjoyment of my property due to his reckless use of his vehicles.”

According to Tire Meets Road, both cases were heard on the same day, with the judge quickly coming to a ruling on the matter. In the case of the first lawsuit, it took less than 20 minutes to reach a verdict. Overall, the plaintiffs were granted $5000 and $500 respectively, to be paid by the defendant. Hillman lives with his mother, who was also listed as a defendant in the lawsuits. The Hillmans dealt with the matter quickly after the loss, paying a total of $5,914.74 to cover the damages and associated legal fees.

During the proceedings, it came to light that both neighbors had sent Cease and Desist letters to Hillman and his mother earlier in the year. No response to the letters was given, which led the neighbors to pursue cases in the San Diego Small Claims court. One suspects that had the letters been paid due heed, Hillman might not have ended up in court this month.

Hillman's initial response to the lawsuit as shown above was one of incredulity. Following the ruling, Hillman indicated that he feared for the impact the decision would have on the rest of the automotive scene. Obviously, one concerned neighbor securing a cash payment from the owner of a loud vehicle could serve as an inspiration to other busybodies to file their own claims. With that said, it appears in this case that the damages were awarded based on a long-term pattern of loud, aggressive driving, rather than a simple case of a neighbor getting uppity over a noisy exhaust. That should be of comfort to automotive enthusiasts who drive respectfully around others.

While loud exhausts and driving like a hoon can be fun, it's typically inadvisable to do so on public roads. It's even stupider to do it regularly in and around your own neighborhood where you'll be annoying the same people day in, day out. The age old expression "don't shit where you eat" applies here. In any case, for his trouble, Hillman is out a big wad of cash. He'll also surely know that further actions down the same path will likely be looked upon poorly by a future judge if it comes to that.