If the Mission E was a teaser for the Taycan, then the Mission R may be our preview of a next-gen Porsche spec racer. 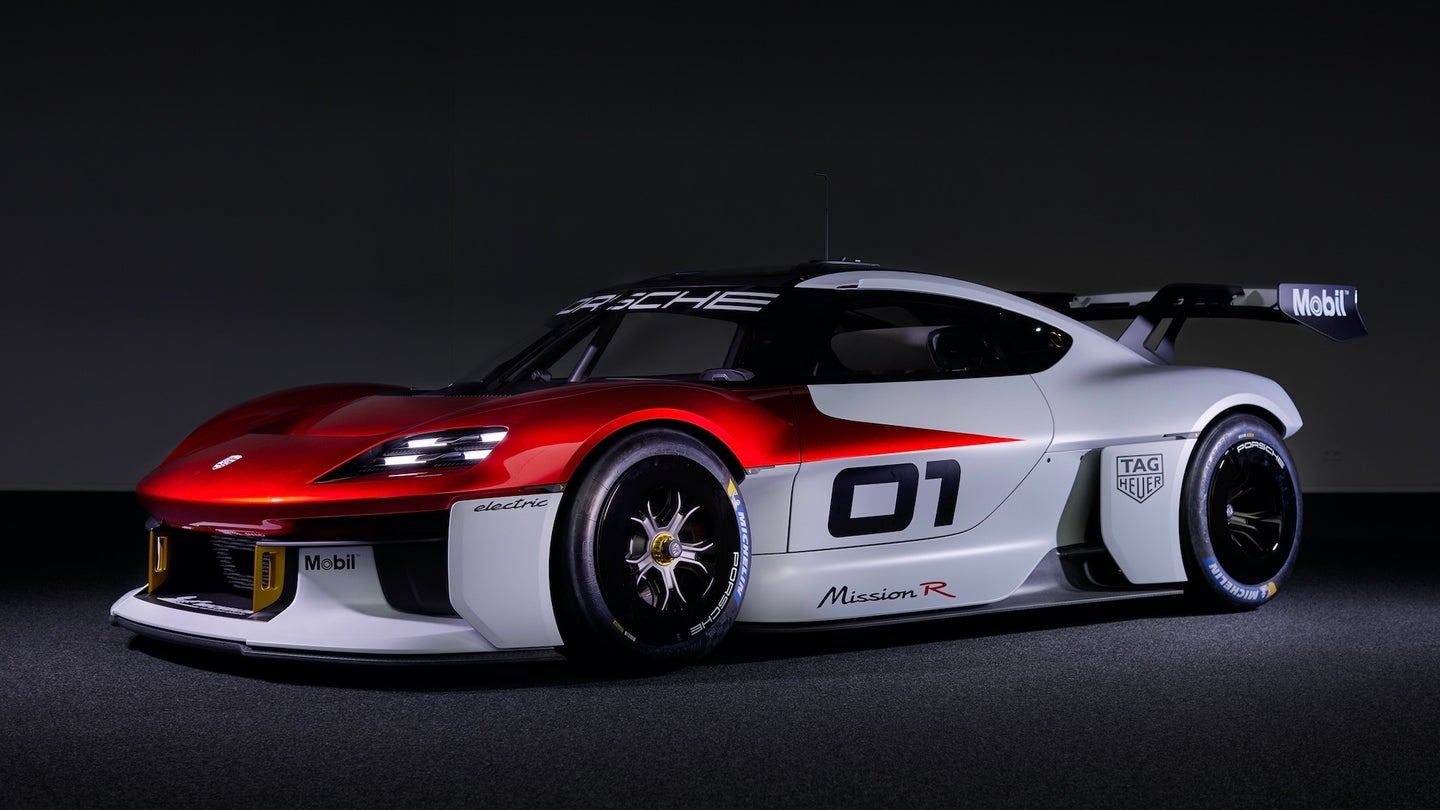 Electric vehicles and top-level motorsport aren't the easiest things to bring together. Battery limitations hinder EVs' track time, and heat buildup can hamper their performance. These problems are tricky to work around, but not impossible to overcome, as Porsche has proven with the purpose-built Mission R racing EV, which while only a "concept study" has clearly been designed with the global motorsport stage in mind.

The Mission R tackles battery-powered cars' aforementioned racing bugbears with a combination of specially designed motors and battery, both of which were engineered to withstand the grueling conditions found nowhere but the track. Its motors, said to preview a new generation, are "permanently excited synchronous machines" that are cooled by oil flowing directly through their stator windings, rather than in a conduit running along them.

This permits a prolonged output of 671 horsepower for up to 40 minutes in race mode; for short bursts in qualifying mode, it makes more than 1,073 horse. Such power allows the Mission R to hit 60 miles per hour in under 2.5 seconds, top out beyond 186 mph, and despite weighing in about 500 pounds more than a 992 GT3, be "on a par with the performance level of the Porsche 911 GT3 Cup," according to Porsche.

It's not just on the track where the Mission R is truly race-ready, either. Onboard air jacks can hoist the car for quick tire changes, and if more serious service is needed, over-the-air tech opens the door for Porsche to remotely troubleshoot the car. Should Porsche find a flaw with the drive unit, one can be swapped out easily, as the Mission R's are designed to be modular and identical front and rear.

Recharging stops are no hitch either, as the Mission R's 900-volt battery can, like the Taycan, accept up to 350 kilowatts of DC input, permitting fast-charging from five to 80 percent in 15 minutes—quick enough to recharge between sessions on track days. Said battery is located not in the floor, but behind the driver in a layout called "e-core." Porsche actually limits this 82-kilowatt-hour unit to 85 percent charge to quickly enable regenerative braking, which can recover up to 800 kW. Depending on the track, Porsche says, this system can recover more than 50 percent of expended energy for reuse.

Taking into account the Mission R's name, one can't help feeling that we're looking at a car on a trajectory similar to the Mission E, which debuted as a wild concept before reaching production as the Taycan, with surprisingly little changed. Some, like those at Road and Track, say it could be a 718 successor in disguise given its length that's identical to the current Cayman. Plus, their silhouettes are pretty similar, too.

There's also a case for this to be made into a real race car. Given the battery's conspicuous location out back and performance approximately on the level of the 911 GT3 Cup, the Mission R starts to feel like a zero-emissions replacement for the 911 Cup car. It might even be suitable for use outside Porsche's spec series too, as it'd easily make a capable autocross or hillclimb car, and may even have a place in regional sprint series like the GT World Challenge Europe Sprint Cup (though its current race format too long for the Mission R).

We've contacted Porsche to work out whether we'll see the Mission R itself race, or whether that'll wait for its seemingly inevitable production derivative. We will update when we receive a response.

Forget your whites and greys, Porsche has gone bright and spunky with this drop.

The street GT3 comes very, very close to matching the race car on a track.