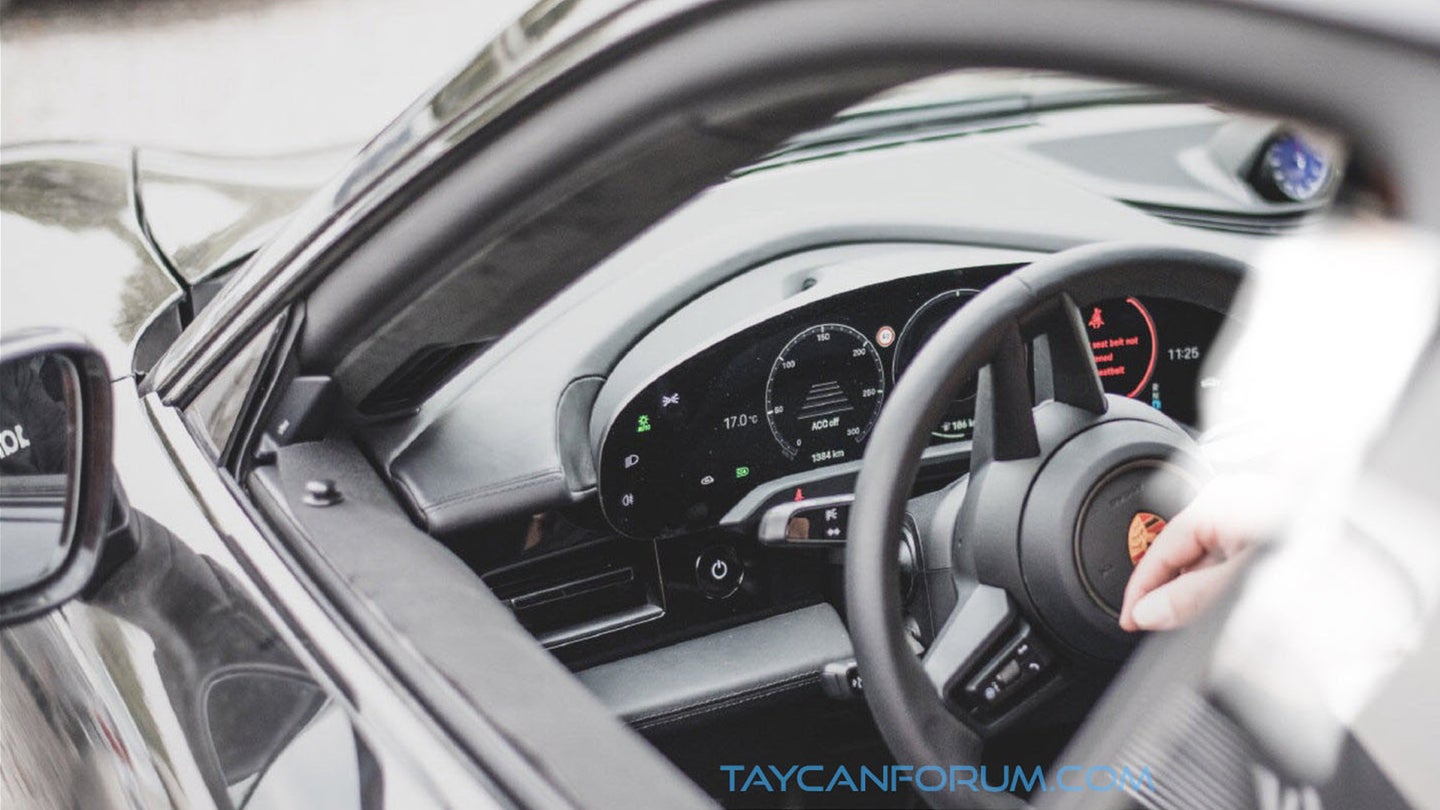 Several spy shots of the Porsche Taycan's supposed production interior were revealed on late Friday evening by a member of Taycan Forum. The user posted the images on the website after spotting a Taycan test mule, presumably located in the poster's specified country of Norway. And while the pair of photos are fairly blurry, they still showcase some interesting and useful tidbits of what to expect from Porsche's first all-electric sedan.

Perhaps most important to note is the Taycan's production interior appears to be on par with the Mission E Cross Turismo concept that was revealed in 2018 at the Geneva International Motor Show. And while it does share some similarities to the original Taycan prototype, Porsche has largely dialed back the futurism in order to make the interior relevant to its buyers.

For example, Porsche has reworked the angles of the interior to be a bit tamer and its door panels have seemingly lost some of their bulk. Additionally, its gear selector no longer resembles an aircraft's thrust lever and the steering wheel has been made more shallow in the name of modesty.

The wraparound digital cluster still remains an integral part of the cabin feel in the production Taycan, with additional screens peppering the dashboard and center console (which has also been refashioned to appear less aggressive). There's a mysterious center gauge which appears to be similarly designed to the analog clock found in some Porsches. This particular bit is new and did not exist in either the Taycan or Cross Turismo concepts.

On the left side of the screen are indicators for the vehicle's lighting functions. The mixture of white and green icons suggest that they are used to toggle the lights on or off rather than just indicate their current state, being a bit more intuitive than toggling some of the lighting functions in the Tesla Model 3.

One of the cabin's most interesting bits is the placement of the car's "power" button. It sits to the left of the steering wheel as a homage to Porsche's iconic left-hand ignition placement, which in itself is a hat tip to the automaker's rich racing heritage.

Porsche only has a few more months before the Taycan is released into the wild in September, so it's not likely that the vehicle will undergo any drastic changes in the next four months before launch. The automaker already has more than 20,000 pre-orders for the vehicle and has estimated that production output would be doubled to 40,000 units annually.