Tangible knobs are so last century. 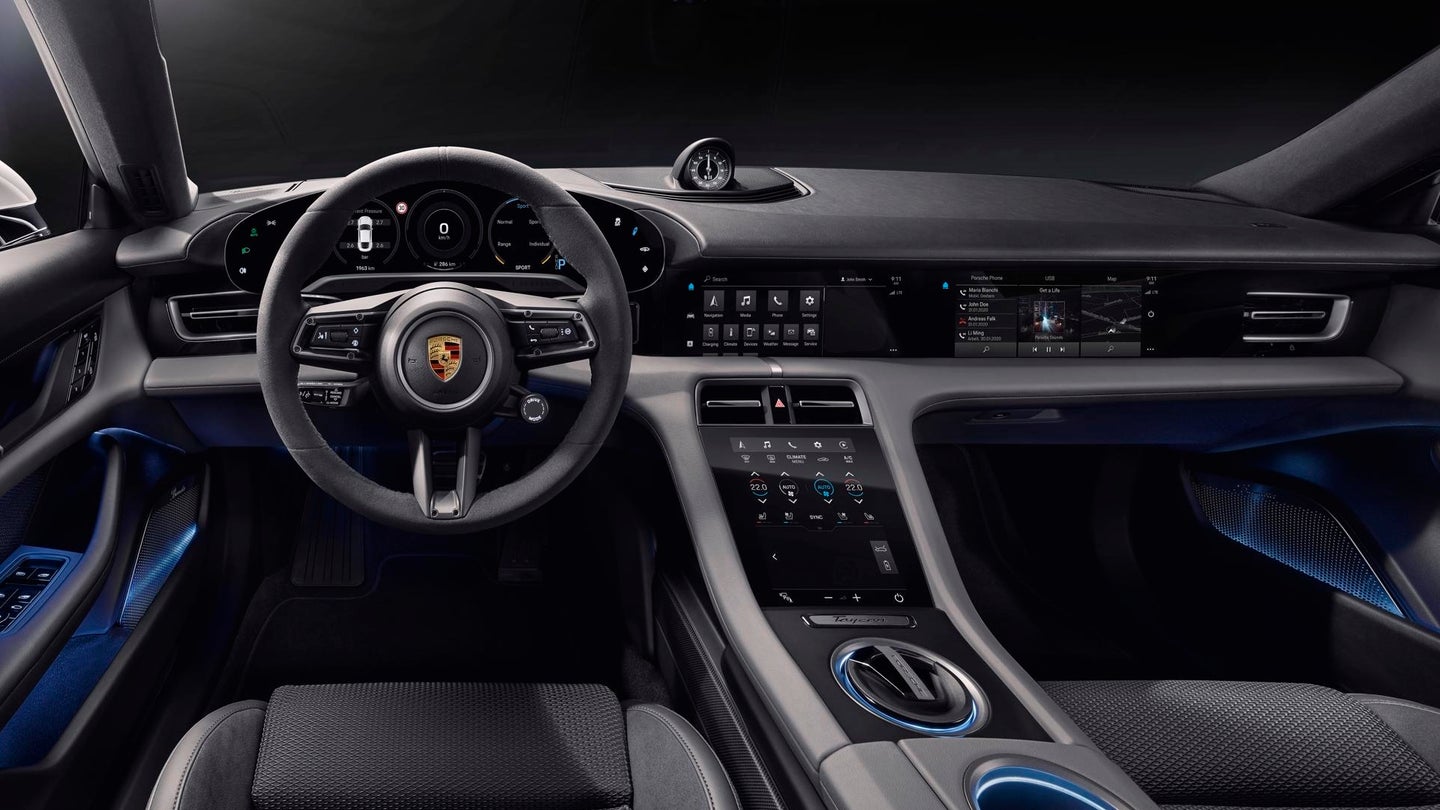 Porsche is inching its way ever closer to the release of its much anticipated, first-ever electric car: The Porsche Taycan. It’s given a precious few test rides, either on backcountry roads or high-speed test loops. It’s showed a number of design sketches. And now, to whet our ravenous appetites even further, Stuttgart forwarded us pictures of the Taycan’s interior like an illicit late-night text. Suffice it to say, we’re ready for the real thing.

As you’d expect from Porsche, the interior is suitably Porsche and is filled with the sort of fit and finish you’d find in the company’s 911, Cayenne, and Panamera. But like the all-electric car, the first in the company’s long history, the Taycan does everything slightly different. The DNA is there, somewhere, in a cloud of electrons.

The lithe steering wheel, for instance, takes the general shape of a Porsche steering wheel. Its circumference is minimal. Exactly what you’d find in the Panamera or new 992 generation 911. But where you’d normally find an assortment of buttons to control all manner of the 911’s system, Porsche paired down the number to fit a more elegant wheel to the Taycan. There’s also a physical Drive Mode knob, but it too has seen a surgeon’s scalpel with just omni-directional dashes to indicate how the knob can move. That, however, is the last of the real.

While the steering wheel connects the Taycan to Porsche’s past, the rest of the interior might as well be out of some Sci-Fi epic as buttons, those physical things developed in the 19th century, are left in the proverbial sands of time. Everything that once required something you could touch, and we do mean everything, has been replaced with a haptic feed-back touch sensor. From headlights to suspension settings to traction control, everything gets the future-forward treatment.

The dash is no different. The 16.8-inch curved screen seems as if it wraps around the driver, offering the necessary information to either blitz everyone’s favorite German racetrack, figure out what song is playing, navigate to your preferred destination, or tell you how much juice you’ve used on the aforementioned Green Hell. Another interesting aspect of the Porsche’s gauge cluster is how you can configure it into four distinct displays. Classic gives you that historical Porsche feel, Map gives you centralized navigation, Full Map gives you nothing but navigation, and Pure, our favorite, which gives the driver only the essentials of speed and speed limit signs. Consider it the triumphant return of Saab's Night Panel.

And while other cars leave the passenger out of the control loop, the Taycan is different. The shotgun seat is treated to its own full-width touchscreen that can control navigation, HVAC, music, and other important functions. The passenger can even input a destination on their side and route directions to the driver’s in-dash nav readout. However, that second screen only turns on when a passenger is present—something the Taycan can detect through seat sensors.

According to Porsche, the all-electric super sedan will also respond to “Hey, Porsche,” just like either Apple’s Siri or Amazon’s Alexa virtual assistants. And like Tesla, the Taycan’s HVAC controls can be dragged and dropped and directed to exactly where you want them to go. Cool. Literally. Unless you're a fan of physical vent controls.

Furthermore, Porsche enthusiasts will be overjoyed that even though the Taycan doesn’t have a traditional ignition, Stuttgart kept the car’s start button on the left, just like every other Porsche. Can't have a future without roots.

The Drive’s Alex Roy, who's put an order in for a Taycan, was given the chance to get up close with the car on Thursday at an exclusive event. "It feels like a Panamera. It's beautiful. The switchgear, the quality of everything. It's fantastic," he beamed. Roy also alluded to the fact that with Porsche’s recent 2,000-mile test in 24 hours around the Nardo Ring in Italy, he could probably shave ten hours off the current EV Cannonball record, a record that was recently broken twice within a few short weeks of each other. We’ll have to wait and see if it actually happens—it all depends on whether Electrify America builds enough chargers that can deliver 350 kW necessary for the Taycan's impressive recharging time.

We’re still a few weeks away from the true debut of the 2020 Porsche Taycan, which will be revealed on September 4th via Livestream. It's anticipated that the Taycan will carry a relatively modest starting price of $90,000 despite being full of tech that’d make Mr. Scott envious it wasn’t attached to the NCC-1701. Though something tells us that second screen is a pricey option, it's still a bargain for the technology, fit and finish, warranty, and brand cache that Porsche brings to the market. Color us green—and excited.