The street GT3 comes very, very close to matching the race car on a track. 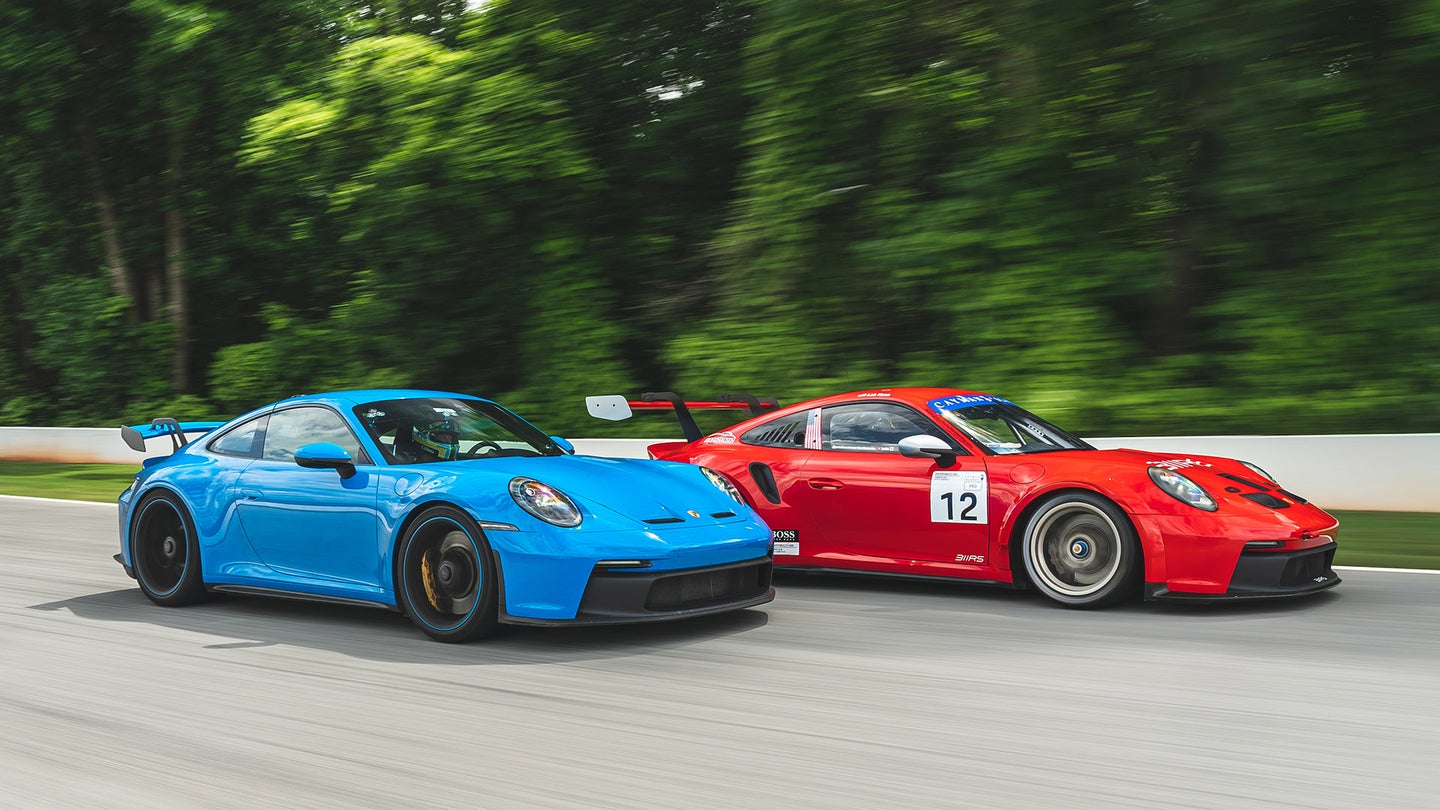 One can make the argument that Porsche is the best sports car manufacturer on the planet at the moment. Sure, there are other manufacturers that make faster or more attractive sports cars. But better? More engaging? I don’t think so. And for sure, of all the amazing machines coming out of Weissach, the 911 is still at the top of that heap. And of all the seemingly infinite 911 variants, the new 992 2022 Porsche 911 GT3 is the best 911—possibly ever.

And so, when I drove the street-legal GT3 back to back with the track-only GT3 Cup race car at Road Atlanta, it wasn’t at all surprising to me how similar the two felt. Maybe this comes as completely unsurprising to you, too—but that's mainly a reflection of how high Porsche's raised the bar for itself in recent years. Really, that the street GT3 can come this close to matching a real race car on track is a marvel of engineering.

Still, there's a reason the 911 GT3 Cup car is illegal to drive on a public road. It remains a pure, unbridled track weapon, where everything you experience in the street GT3 is sharpened, magnified, enhanced. It is a landbound missile that also happens to be, in this pro driver's opinion, the best new manufacturer-built race car on the planet.

The GT3’s chief engineer, Andreas Preuninger, and his team at Weissach have turned updating 911s into an art form. They’ve taken each generation of what is already a good car and made dozens of incremental improvements which culminate in a new car that outstrips the old one in every way. But every once in a while, there is a push from Preuninger’s team to do something big, something that breaks with Porsche tradition in order to make a generational leap in performance. With the 992 GT3, that something is a double-wishbone front suspension.

Historically, road-going 911s have always had a strut front suspension—with a few exceptions such as the 959—as it is substantially easier to package in a limited space. However, in return for space savings, you give up a lot in performance, as a strut has to act as a loaded member of the suspension during cornering. Because of flex in the strut, the loaded front wheel loses camber as the loads increase, meaning there is less rubber in contact with the pavement in the middle of the corner—exactly at the point when you need as much grip as possible. Additionally, that flex in the strut means that it is also binding and not working at full efficiency, which again is detrimental to grip and performance. This has always been a major chink in the 911’s armor. 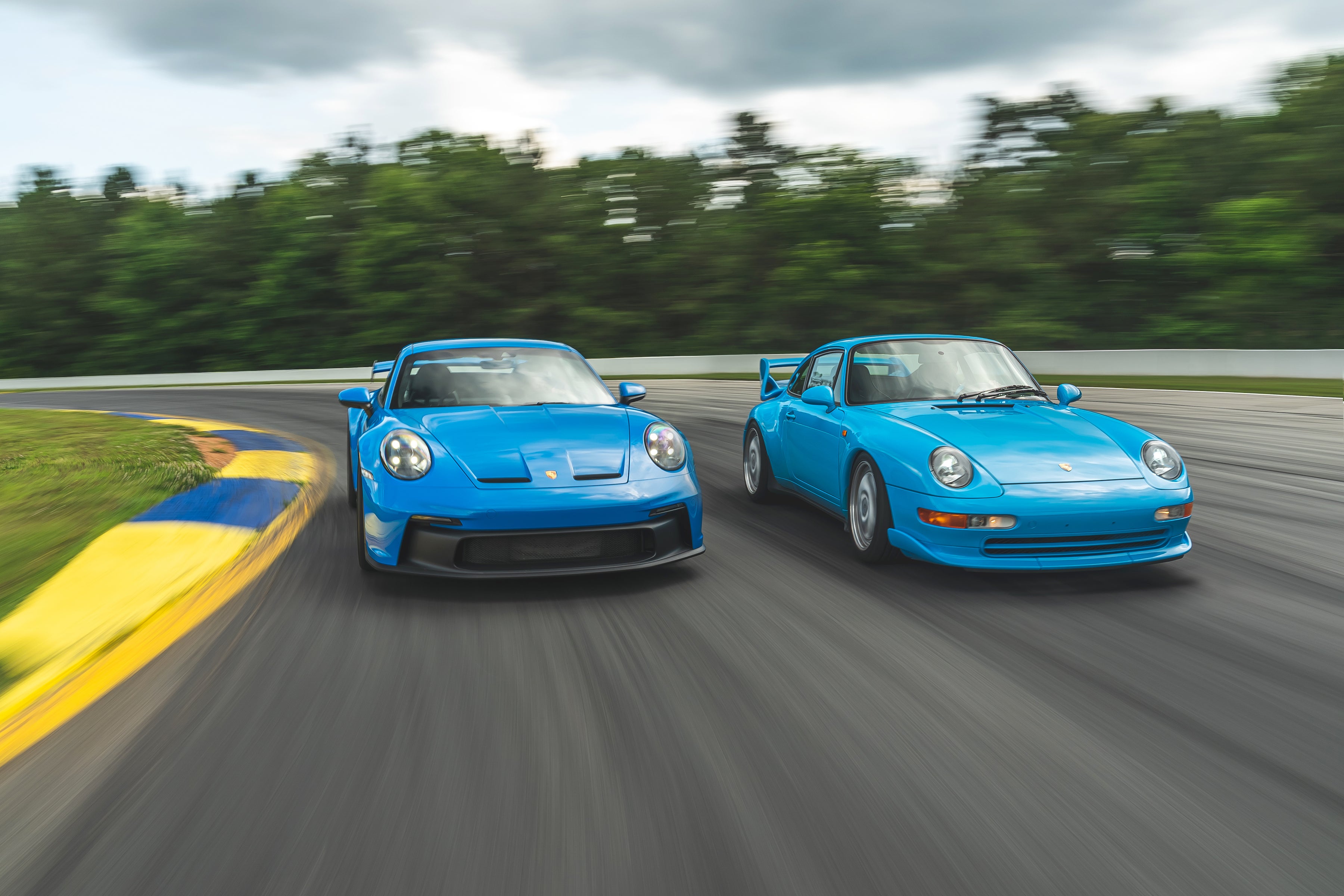 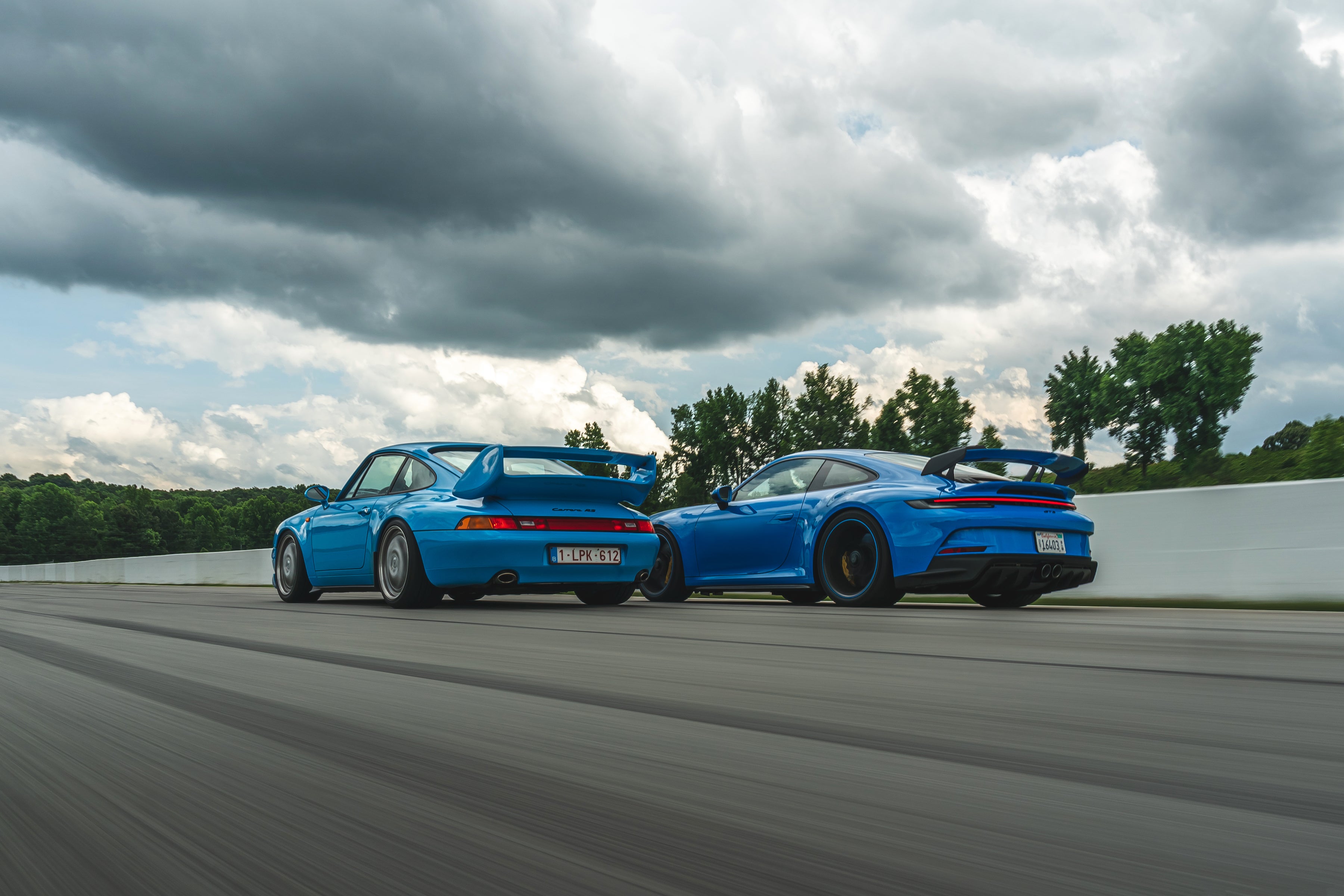 However, the 992 GT3’s new double-wishbone front suspension (which is heavily influenced by the 911 RSR race car) solves those issues. The wishbone suspension takes all of the load during cornering, maintains camber, and allows the front damper to just focus on one thing: being a damper.

The dampers themselves have been upgraded as well. The adaptive system now reacts within 10 milliseconds and has allowed Porsche engineers to double the spring rates without any noticeable impact on ride quality (that is, not noticeably over the last generation of GT3 cars and not, say, a Mercedes-Benz S-Class). Additionally, the 992 GT3 also comes with the same ball joint suspension as in the last-gen GT3 RS, giving the car an amazingly stable platform with which to carve corners.

In practice, this means that the 992 GT3 is the best-handling 911 I have ever driven. Period.

For my track session, Porsche brought its works driver, Pat Long. He is one of the best and most successful Porsche drivers in history. Not to mention a great guy to boot. 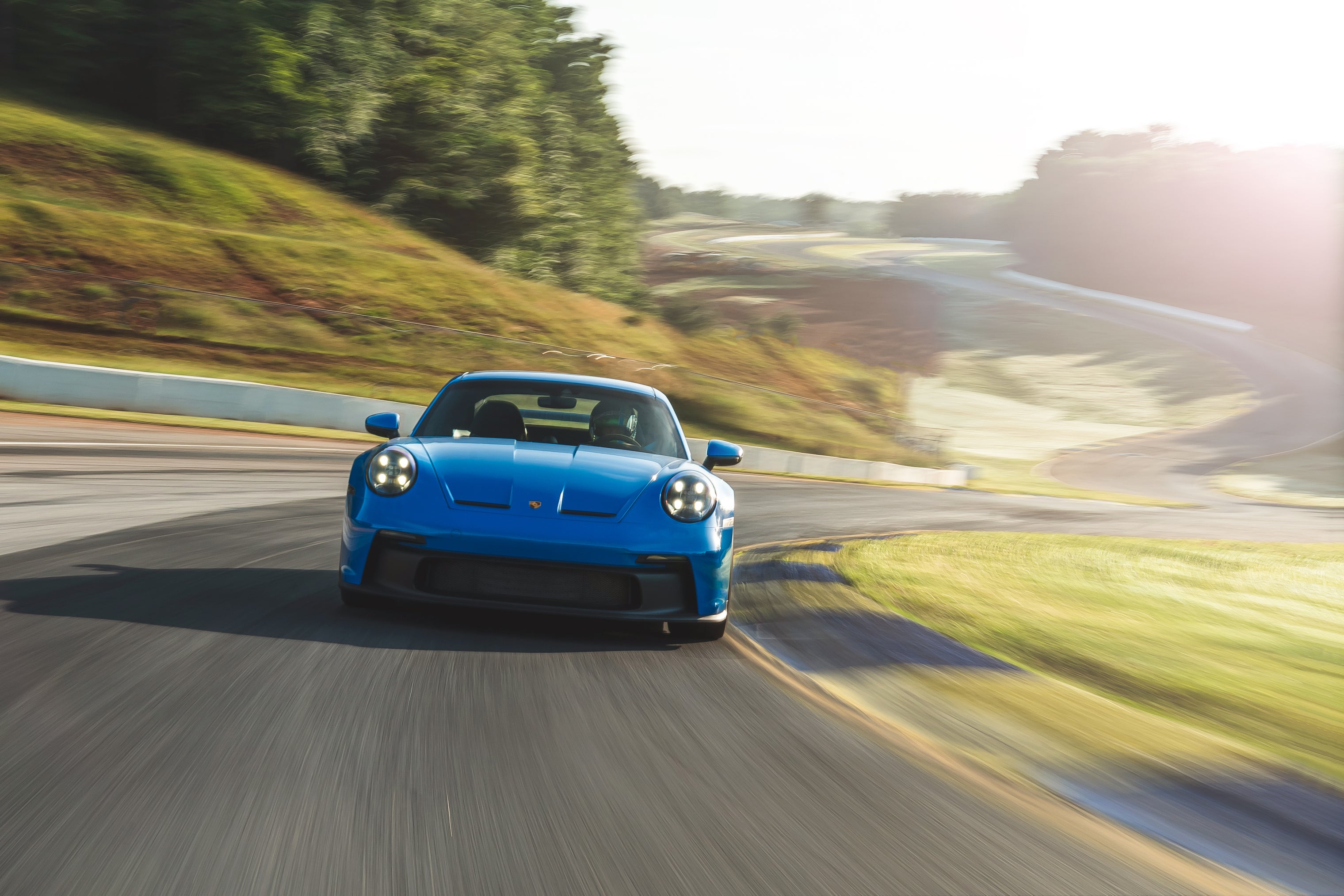 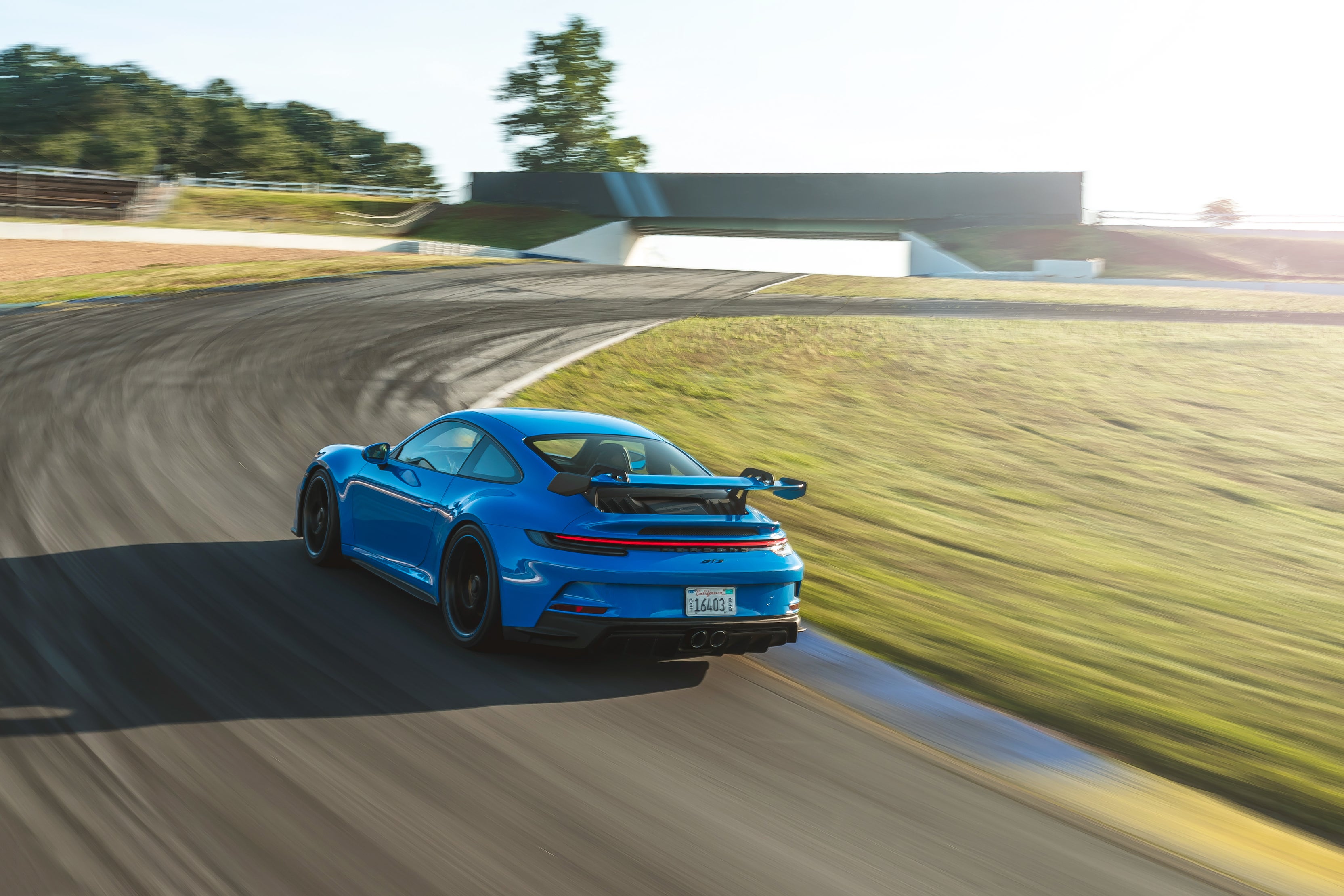 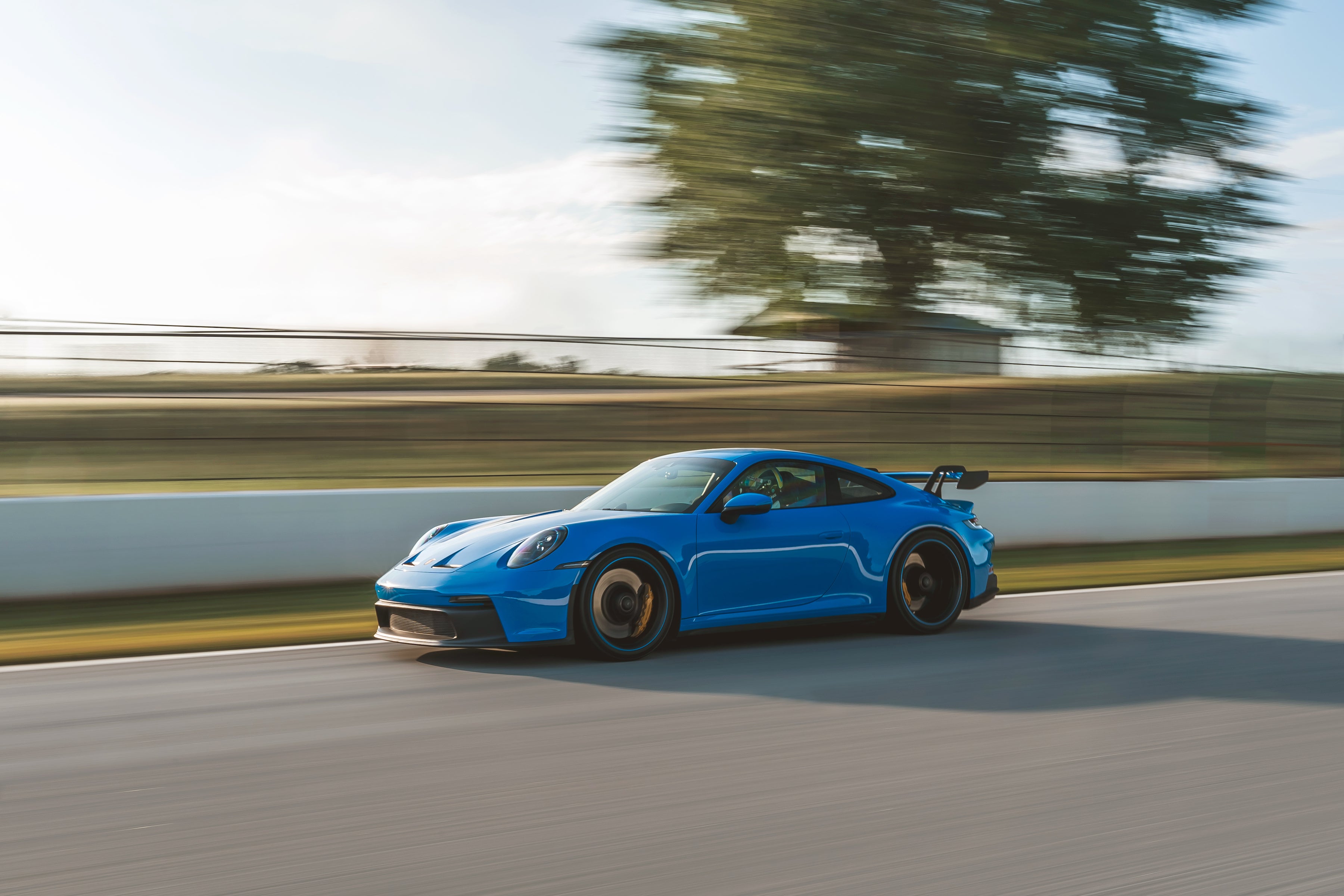 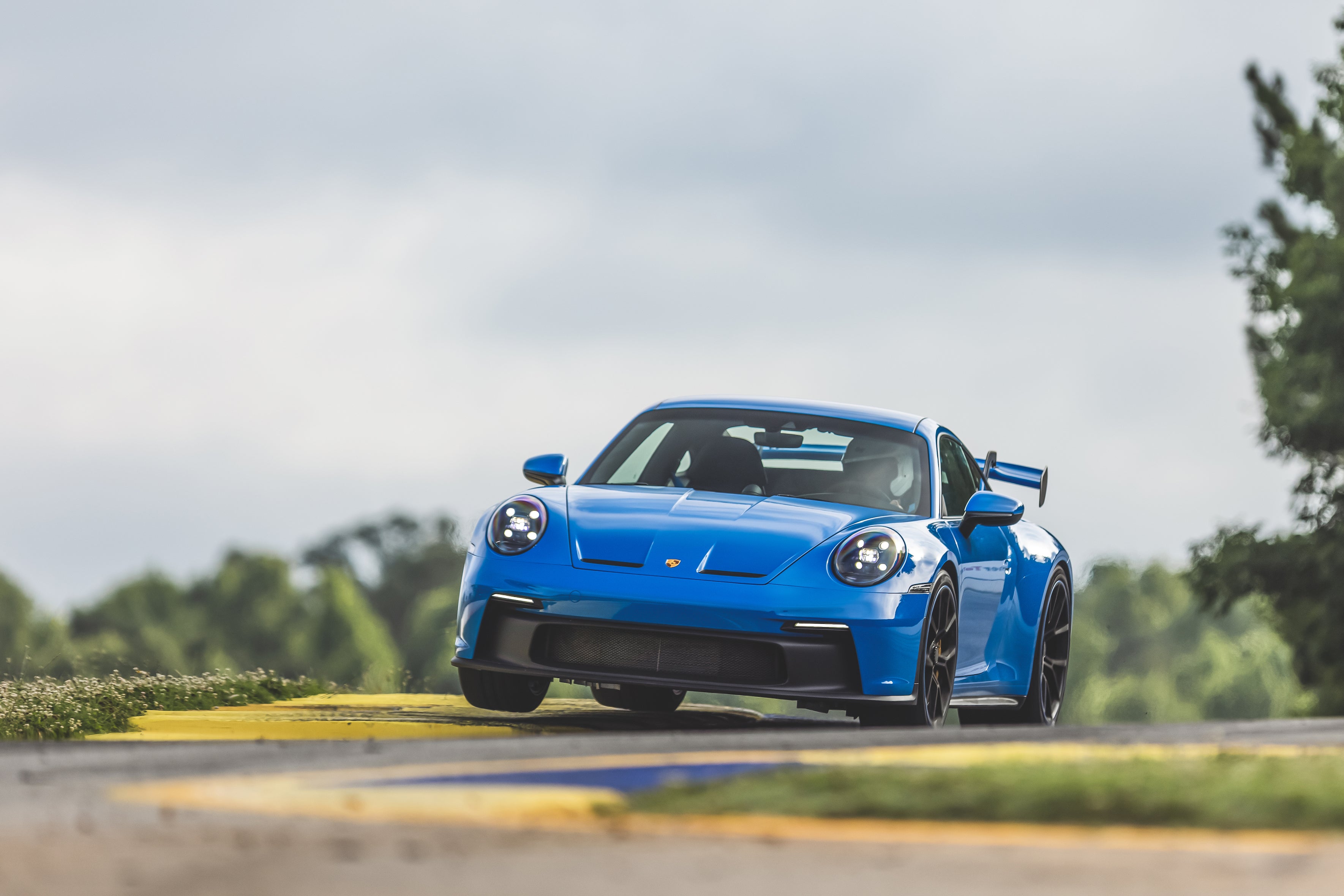 Long led in a 911 Turbo S while I followed in the GT3. The all-wheel-drive Turbo S has an obvious advantage coming off the corners and in straight-line speed. But the GT3, being lighter and far more nimble, has the advantage in the corners and under braking.

However I wasn’t really thinking of troubling Long in the Turbo S, no matter how quick the GT3 may be, as 1) it was my first time back to Road Atlanta in over a decade, 2) I was invited by Porsche to test the GT3, not to try to impress for a job as a factory driver, and 3) very few guys in the world can pressure Long in a Porsche.

Keeping that all in mind, I rolled out onto the Road Atlanta tarmac for my first few exploratory laps. Long was kind to me initially, keeping the pace moderate to let me remember my way around and get a feel for the new GT3. Everything I remembered from driving the LA canyons a few weeks prior was still there. The immediate turn-in response, the stable feeling of the chassis over the rough sections, and the substantially improved grip were all still present. Basically, it was automotive nirvana. Then we came across the line to start lap two and Long disappeared. 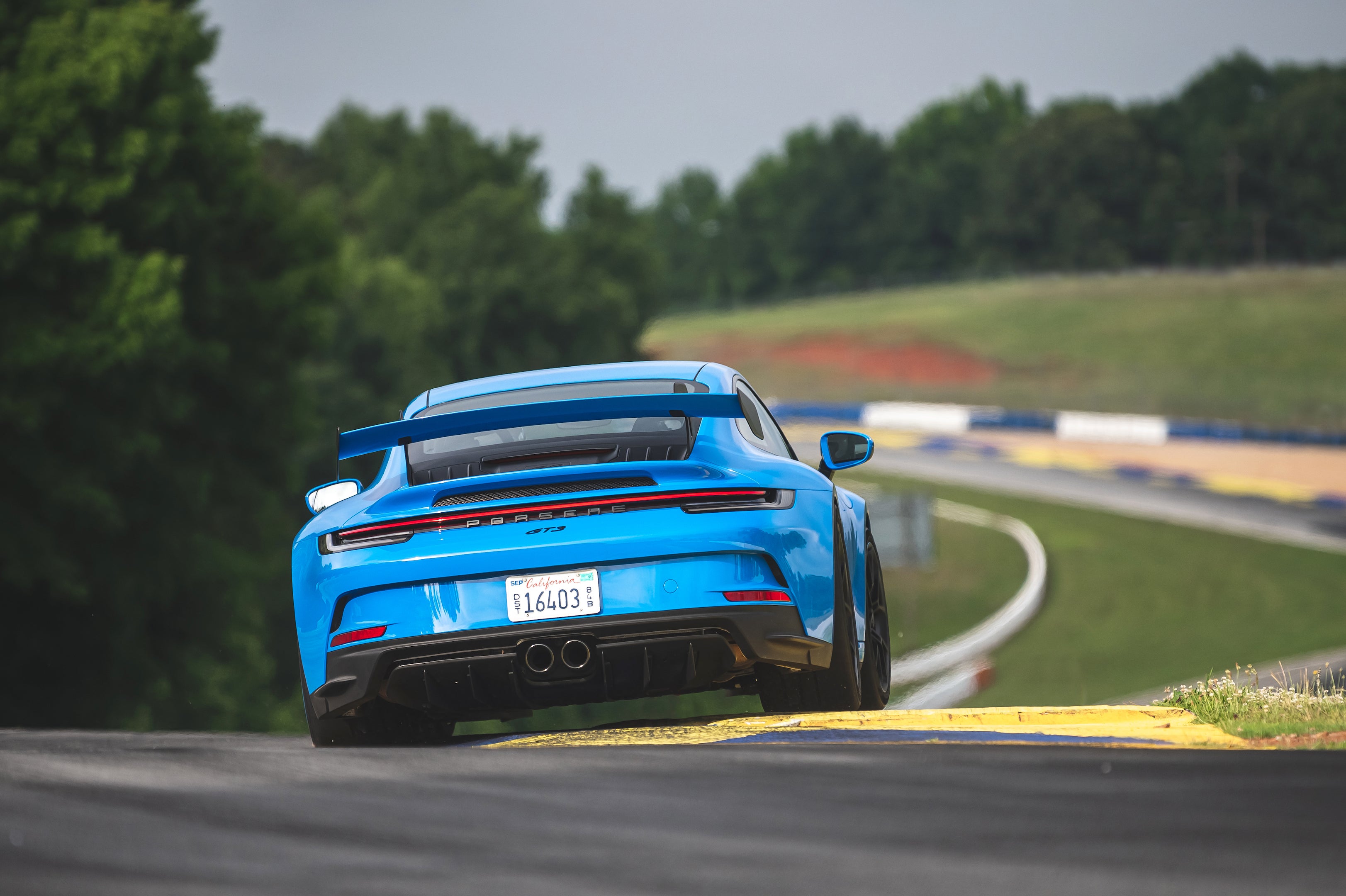 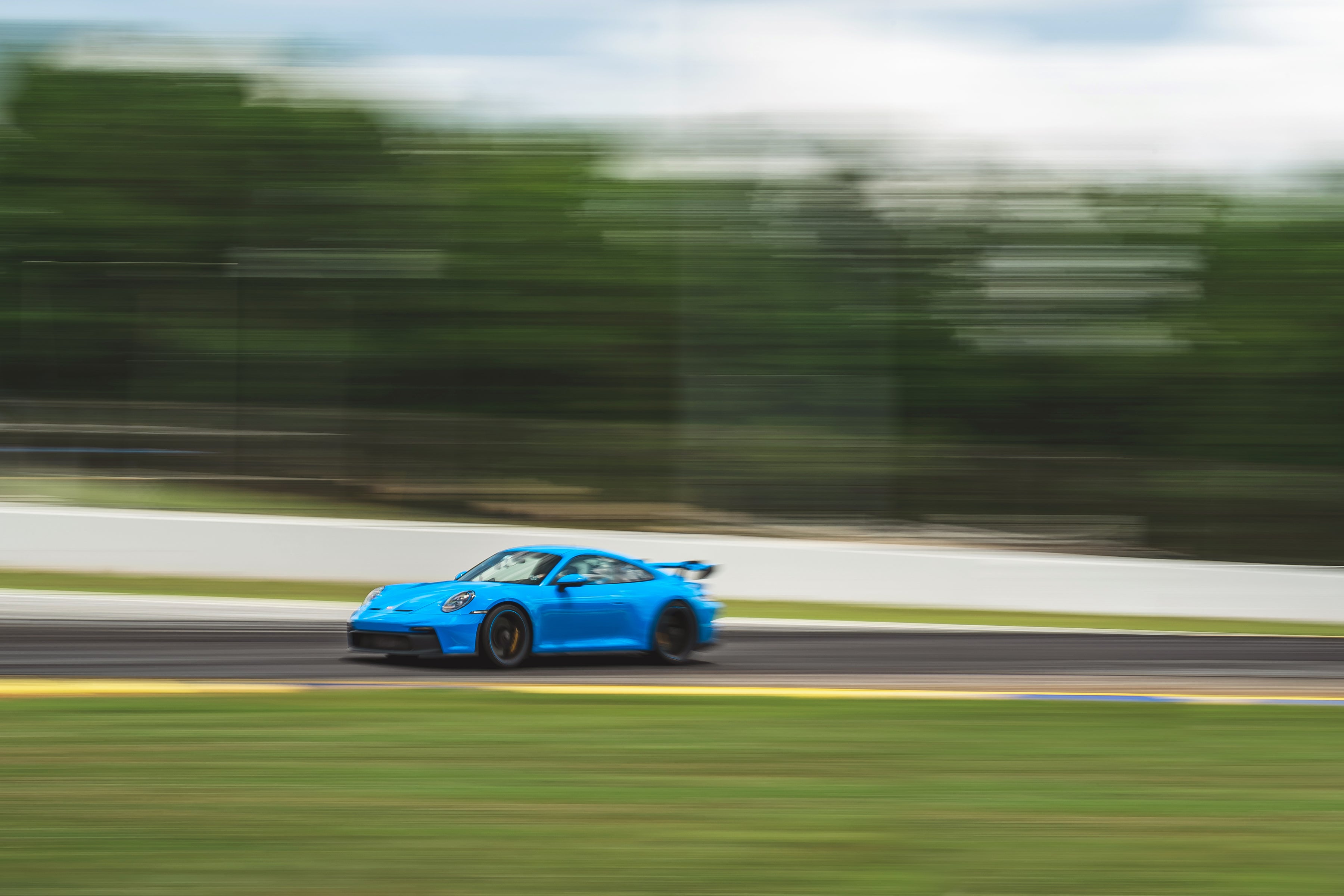 So much for letting me get warmed up! Jumping to warp speed in a car I had only driven once on a track that I hadn’t been on for 10 years with all the Porsche PR people looking on and Pat Long rapidly disappearing off into the distance should have been, at best, a teeth-clenching ordeal and, at worst… Well, let's not go there. Either way, no bueno.

But funny enough, that's the moment when I really fell in love with the GT3. I pushed. The car went faster. That simple.

To those who maybe haven’t spent time on a track before, I want you to know how amazing that last bit is. Typically, when a driver starts to push towards a car's limits, unexpected things tend to happen. The car gets nervous and usually, one end or the other starts to slide around more than you’d like. You tend to overdrive the car and go slower as a result. It's a tough situation with which to get the most out of the car in terms of both enjoyment and lap times. The 911 GT3 nails that sweet spot with brutal efficiency. 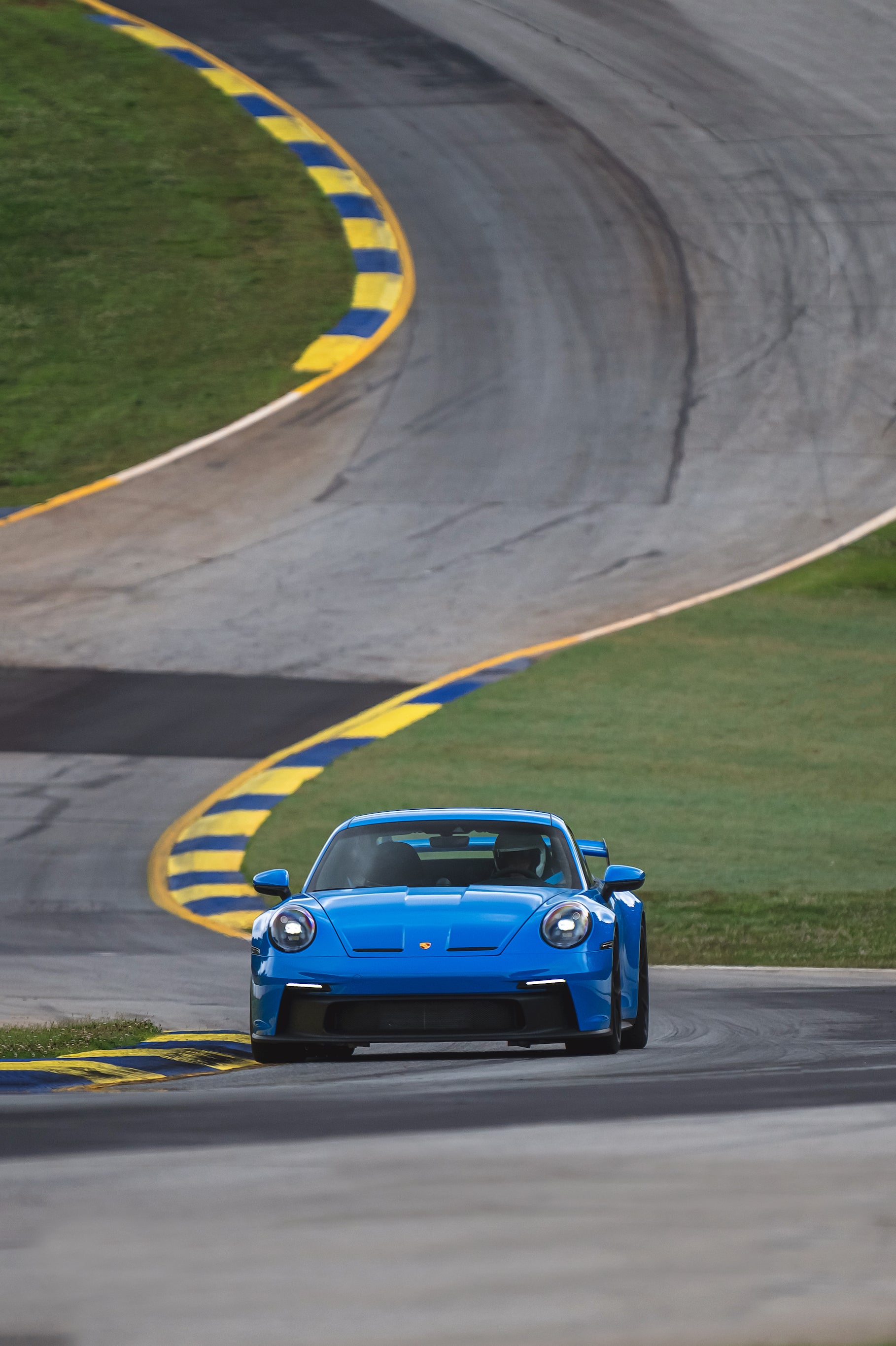 There is the old adage: “Racing improves the breed.” Nowhere is that more evident than in the 992 GT3. But with Porsche, I think you can also make the case that “the breed improves racing.” I was about to get the chance to prove it as now that I was sufficiently warmed up (after chasing Long around for a half dozen epic laps), Porsche was about to turn me loose in the race car. This time, there was no lead-follow. Just me, a brand-new GT3 Cup car, and 2.5 miles of Road Atlanta pavement.

Take everything I just wrote about the GT3 street car, multiply it by 10, and then turn that up to 11. The Cup car is so much better than the street car in every way I almost don’t have words to describe it. Almost. 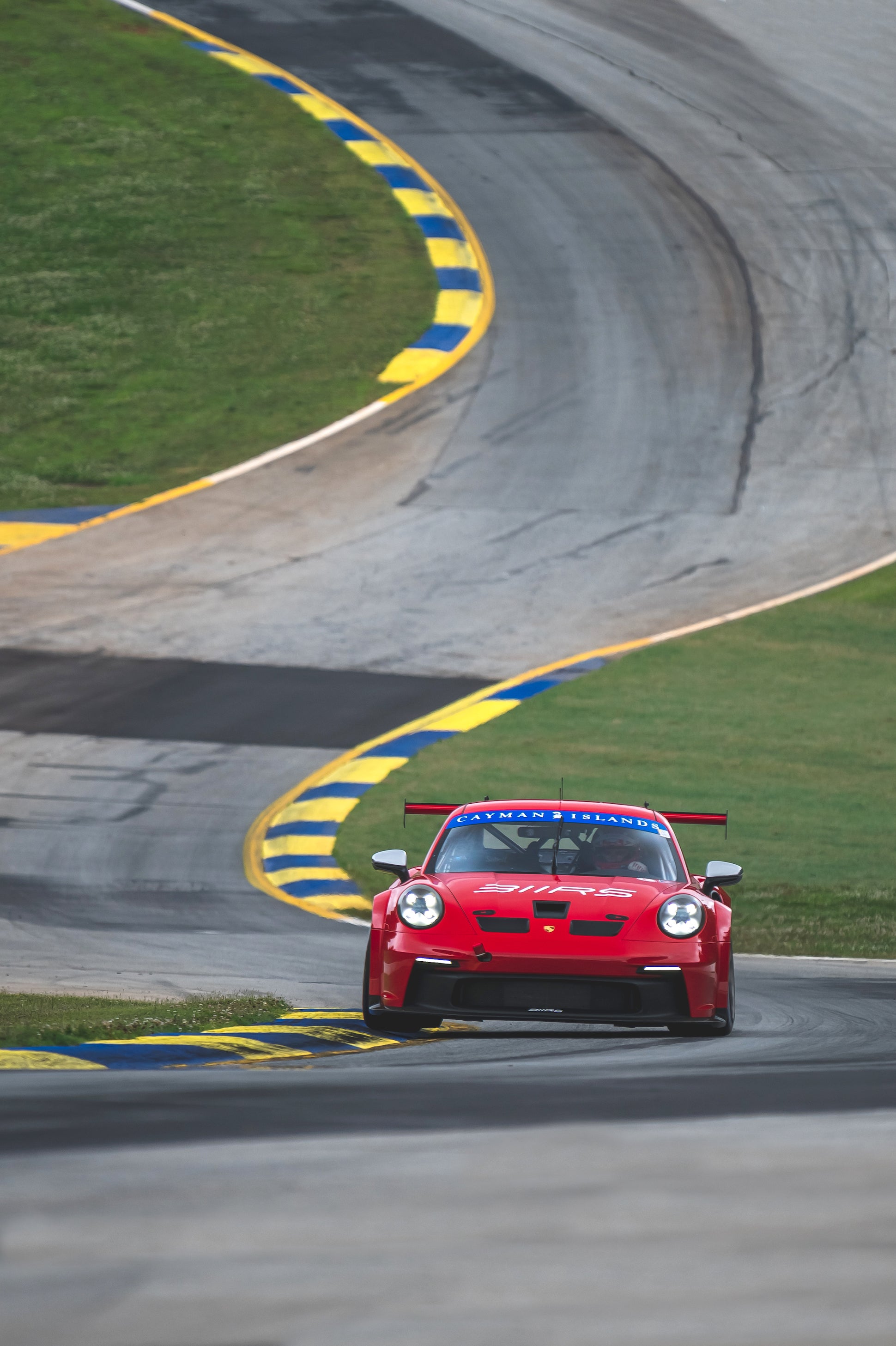 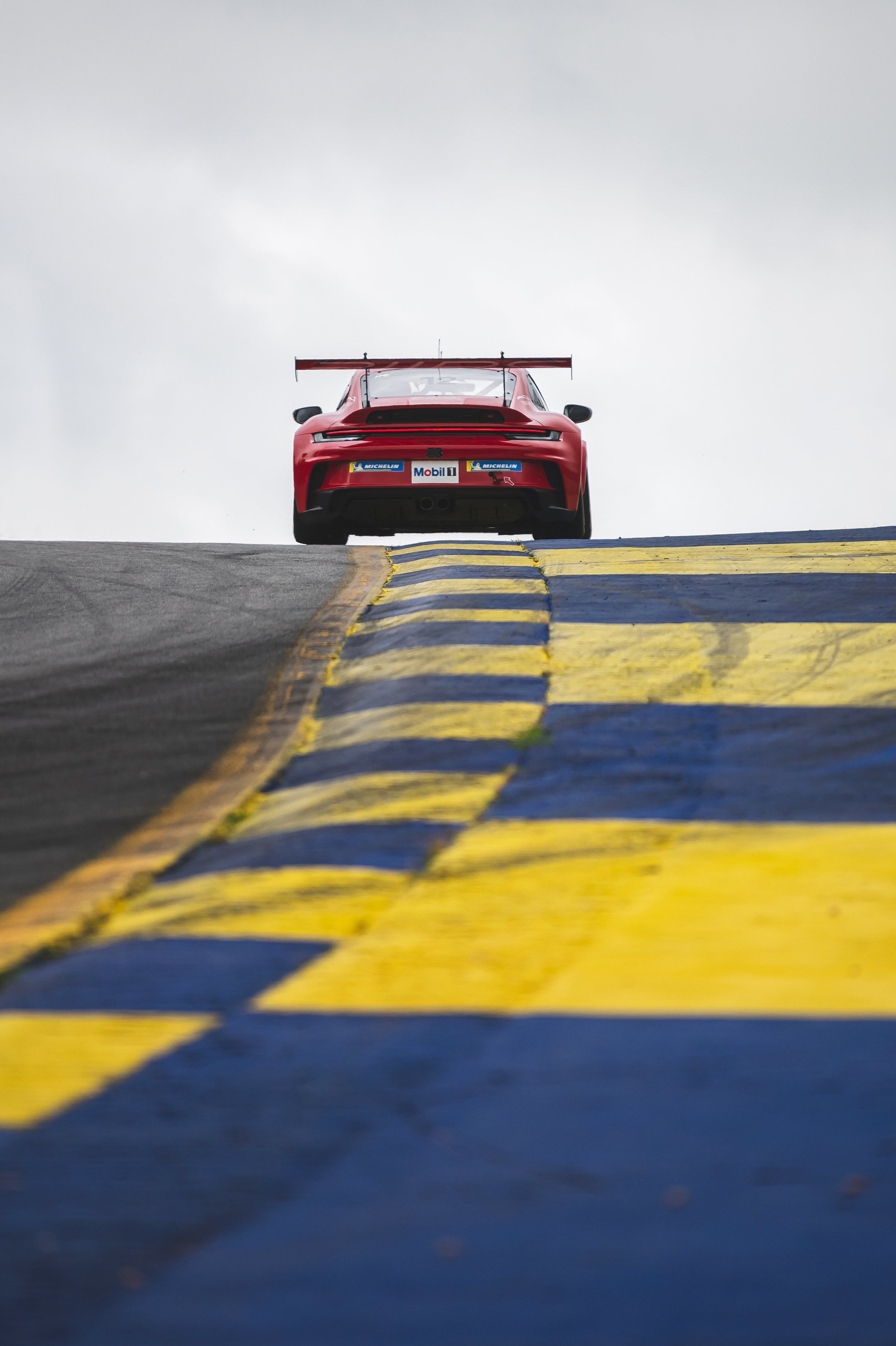 Now, the first thing to understand is the 992 GT3 Cup car isn’t some Sunday-only, tube-frame special. The similarities are way more than skin-deep. For example, the engine in the Cup car is the same as the one used in the street car, with only the intake and exhaust being race parts. You have to have respect for a manufacturer that is willing to put the same motor that has to last 100,000-plus miles in a road car into a race car that will live at 9,000 rpm its entire life.

Notable differences? The Cup chassis is sourced from the Turbo and not the Carrera 4S as it is in the street car. Also, the gearbox is a full race-bred sequential in place of the street GT3’s PDK or six-speed manual. But, honestly, that's about it for major changes.

The particular GT3 Cup I was invited to drive was the property of 311RS Motorsport, a Minneapolis-based Porsche racing and service company, and is currently competing in the Porsche Carrera Cup—the only series the car is currently homologated to race in—with Porsche expert Leh Keen behind the wheel. Keen, along with team owner and driver Ryan Gates, were on hand to keep an eye on their quarter-million-dollar car and make sure I returned it in the same condition that I found it. Also on hand was fellow journalist and ex-Corvette factory driver Andy Pilgrim, who was to test the GT3 Cup later in the day. With all these people counting on me not to mess up, no pressure, right? Everyone’s eyes were on me as I rolled down pit lane with more than a bit of trepidation. 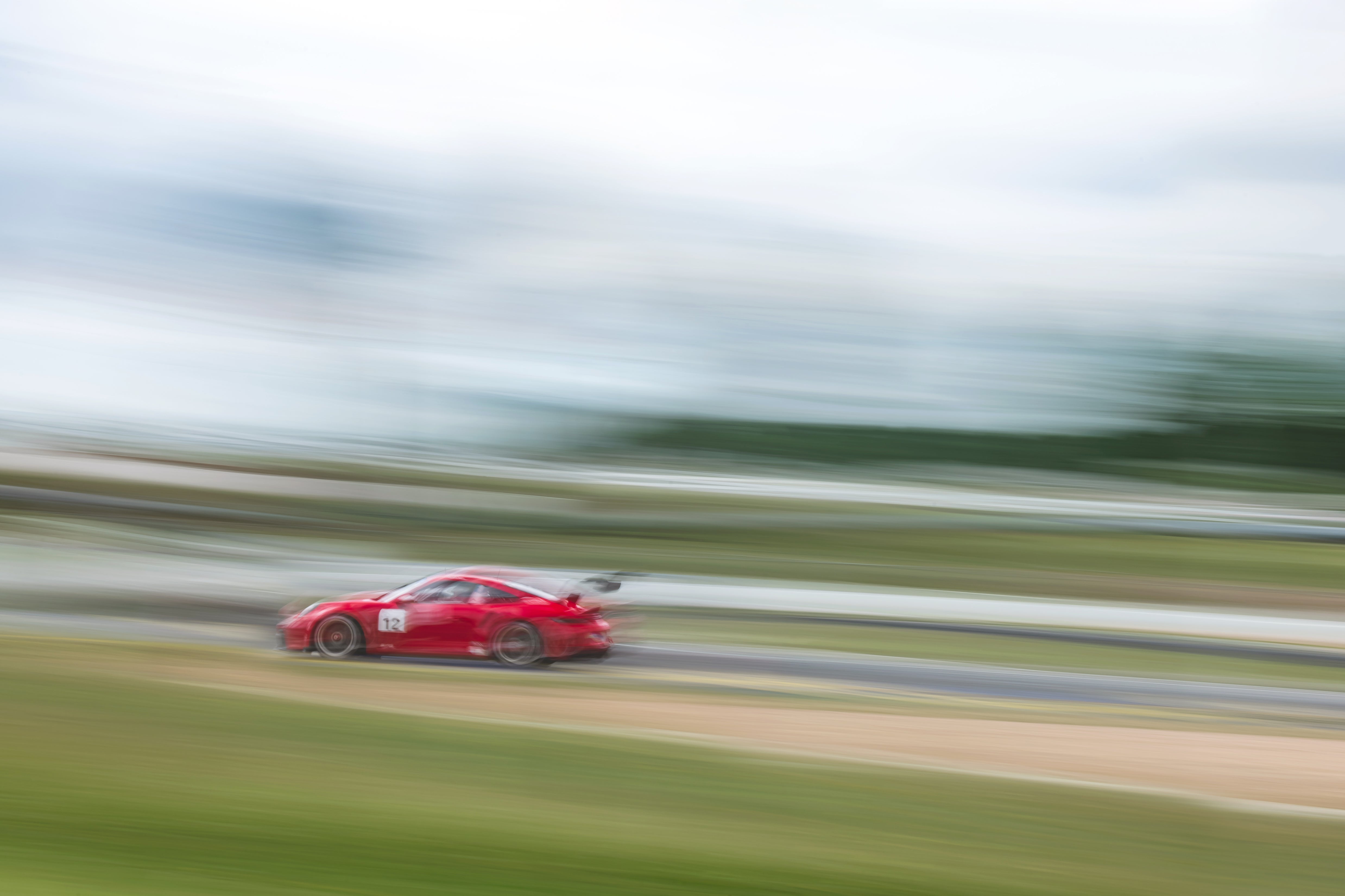 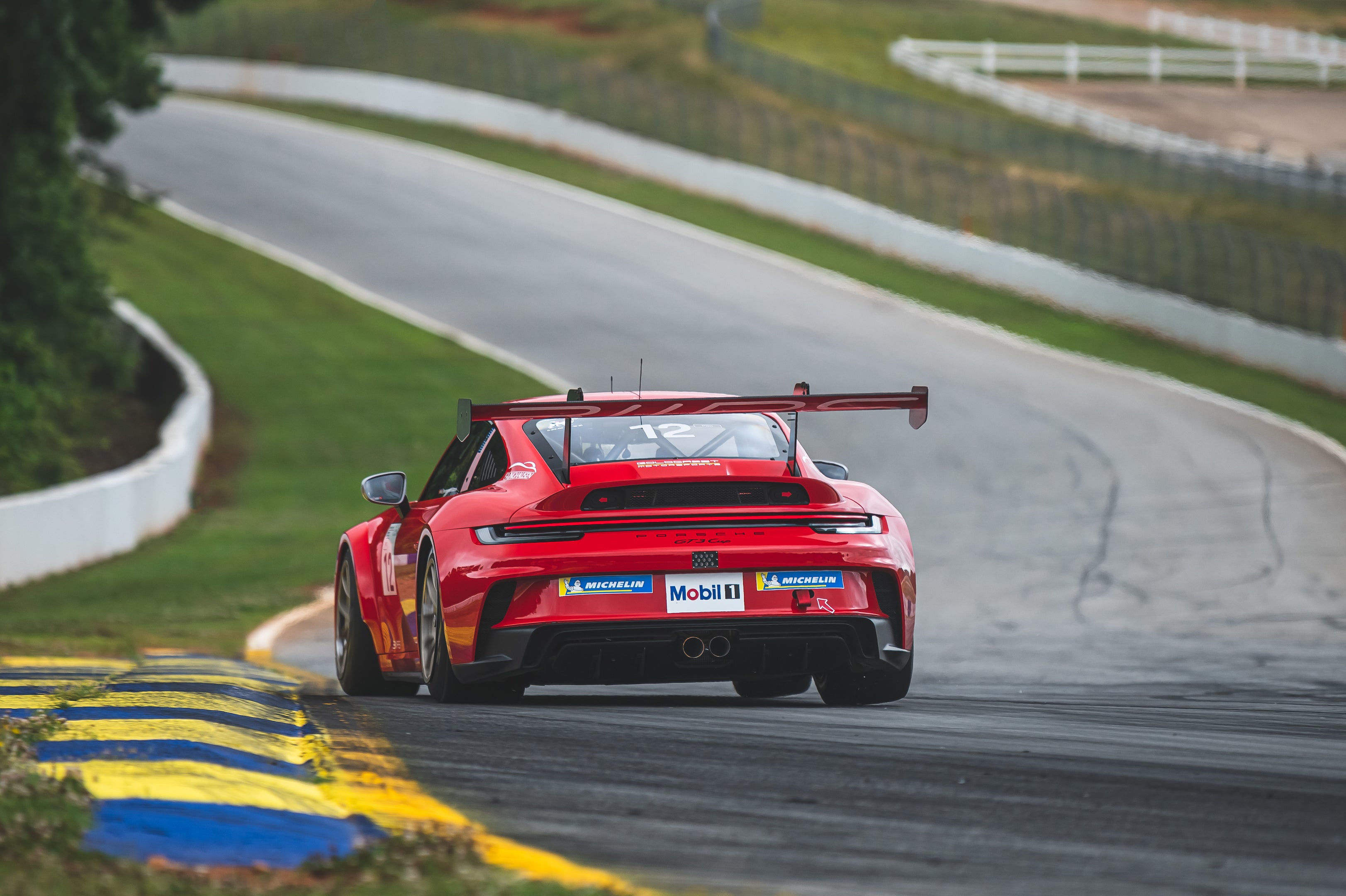 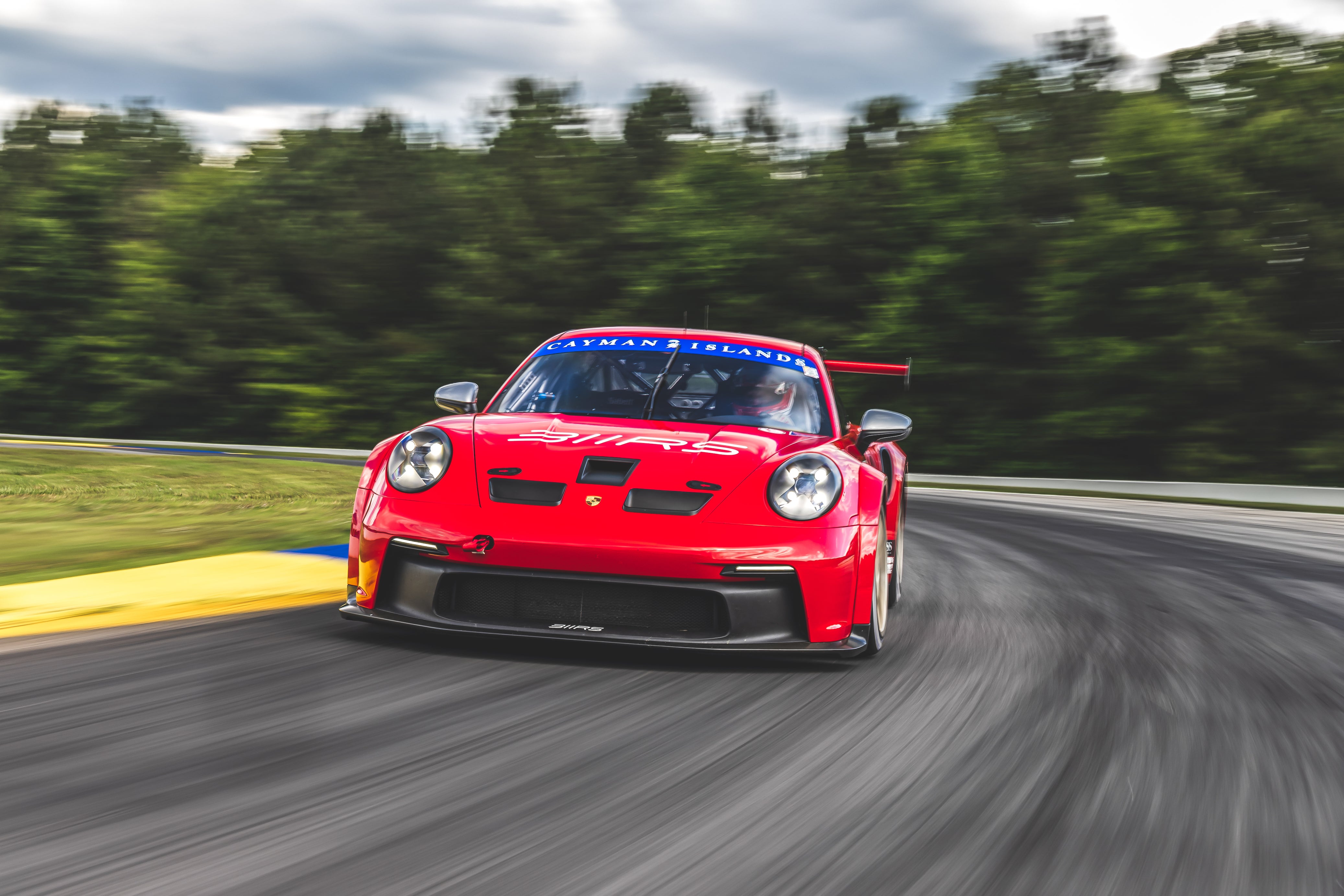 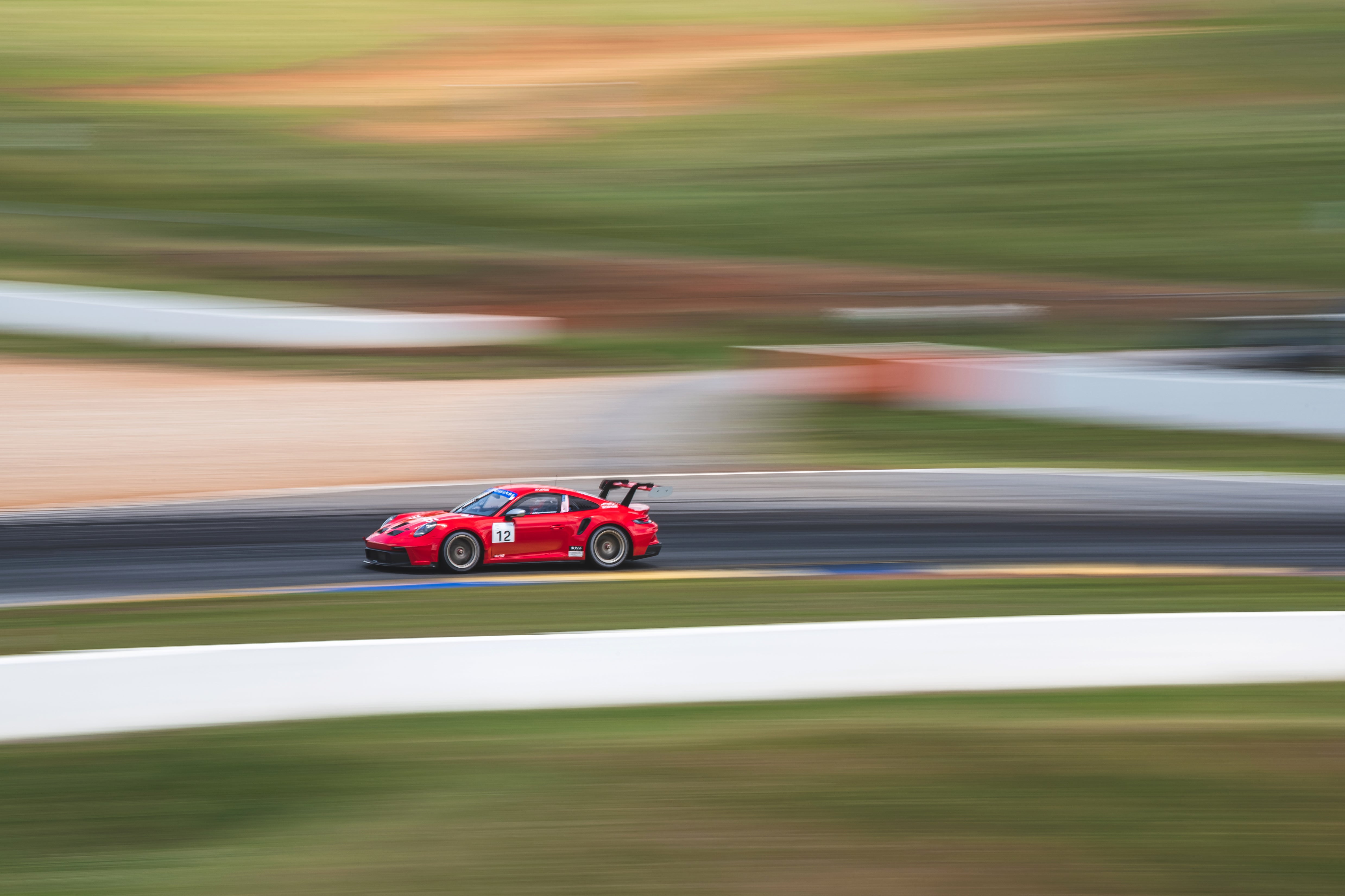 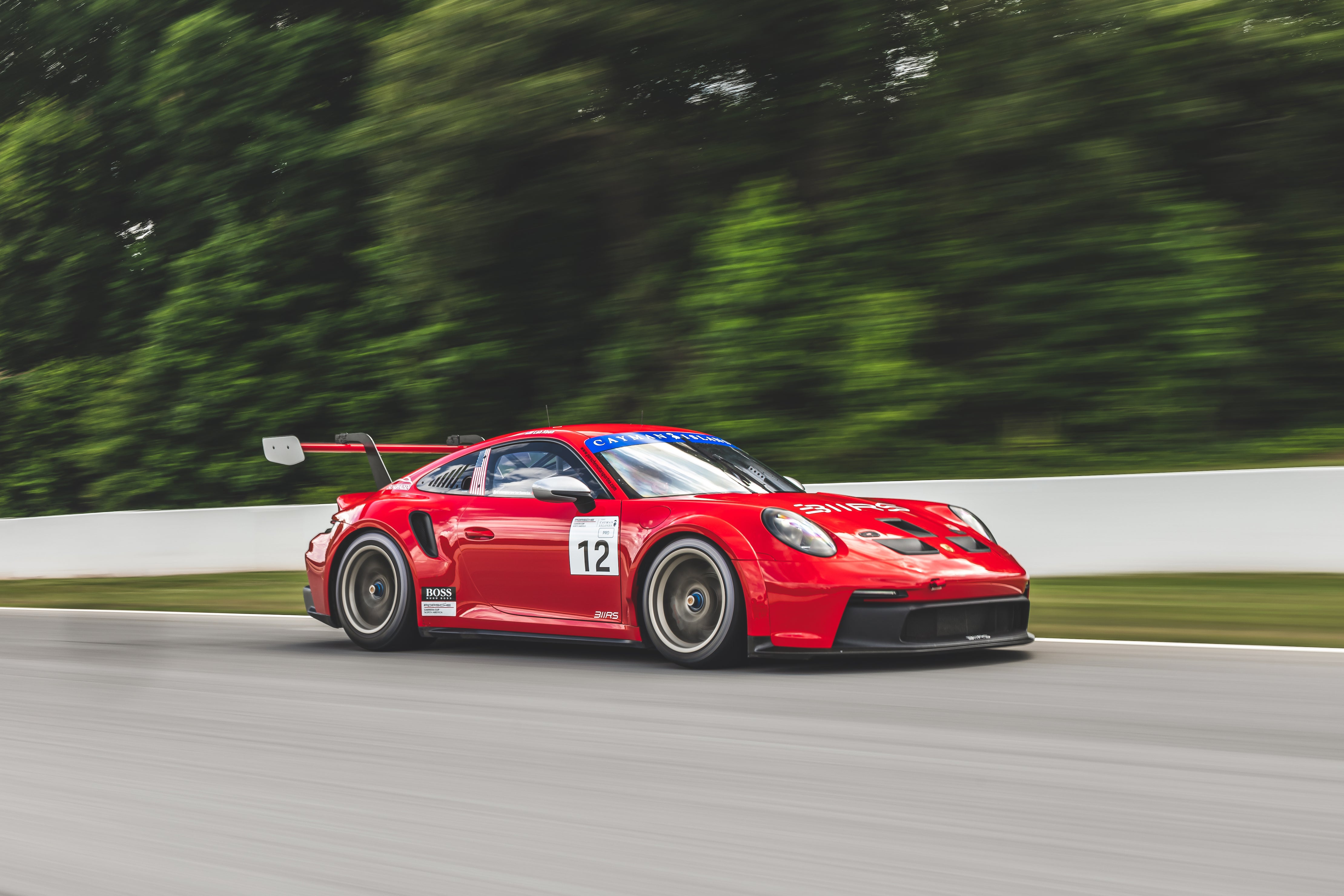 And then I went into turn one and all was right with the world.

The main thing that stood out to me was that the ease with which the race car got up to speed was exactly the same in the street car. Straight away, I felt comfortable enough to start pushing a bit and seeing where the limits were.

But the GT3 Cup didn’t actually care how hard I pushed—it just gave me more and more feedback the harder I went at it, allowing me to get closer to its limits faster than should have been possible. It’s a vehicle that inspires massive confidence in its driver at all speeds, which is the hallmark of an extraordinary car.

With only a handful of laps allocated to me—four, to be exact—I didn’t have enough time behind the wheel to get close to experiencing the car’s ultimate potential (my seat-of-the-pants guess is there were three or four seconds of lap time left in the car), but I was able to push hard enough to glimpse it. 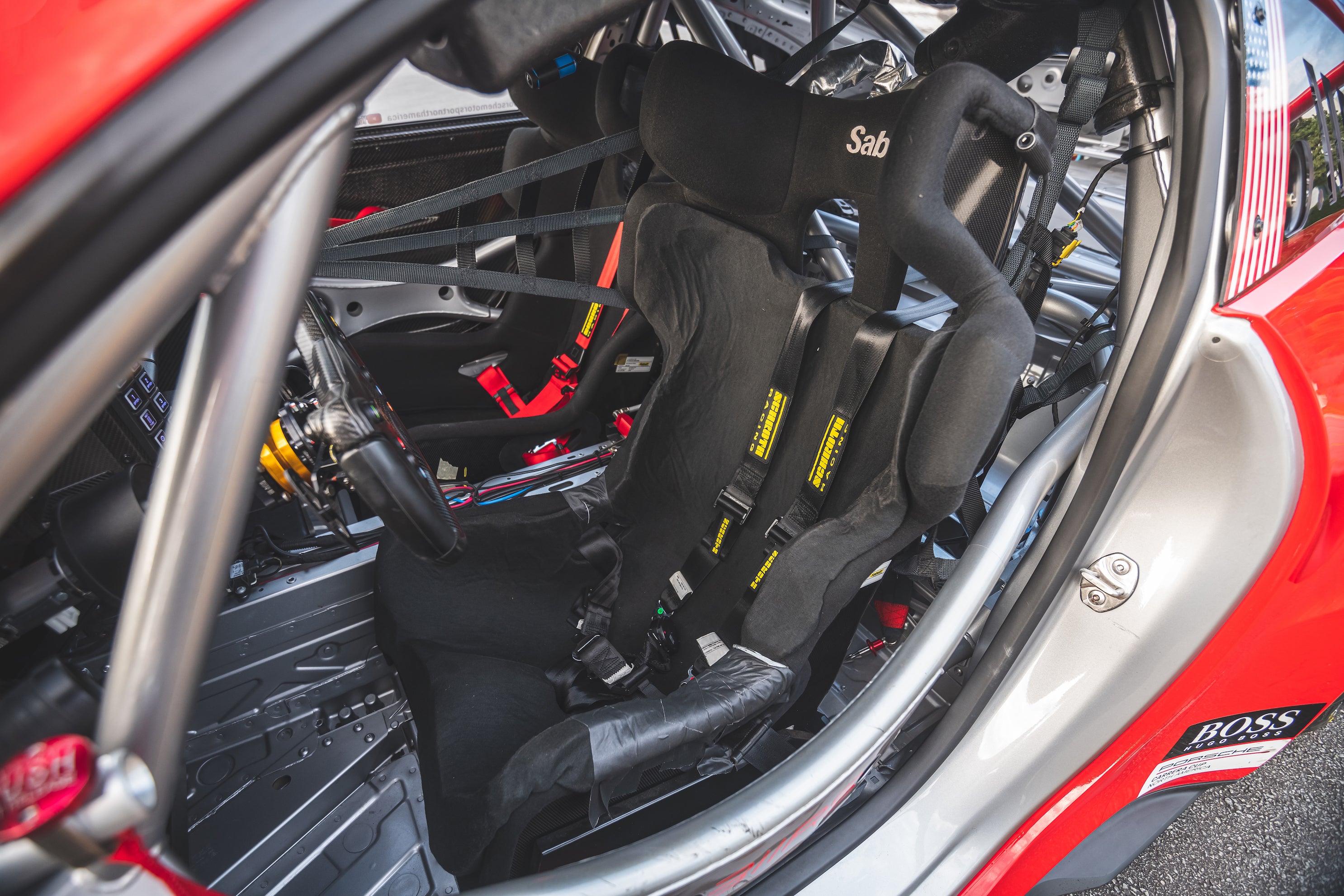 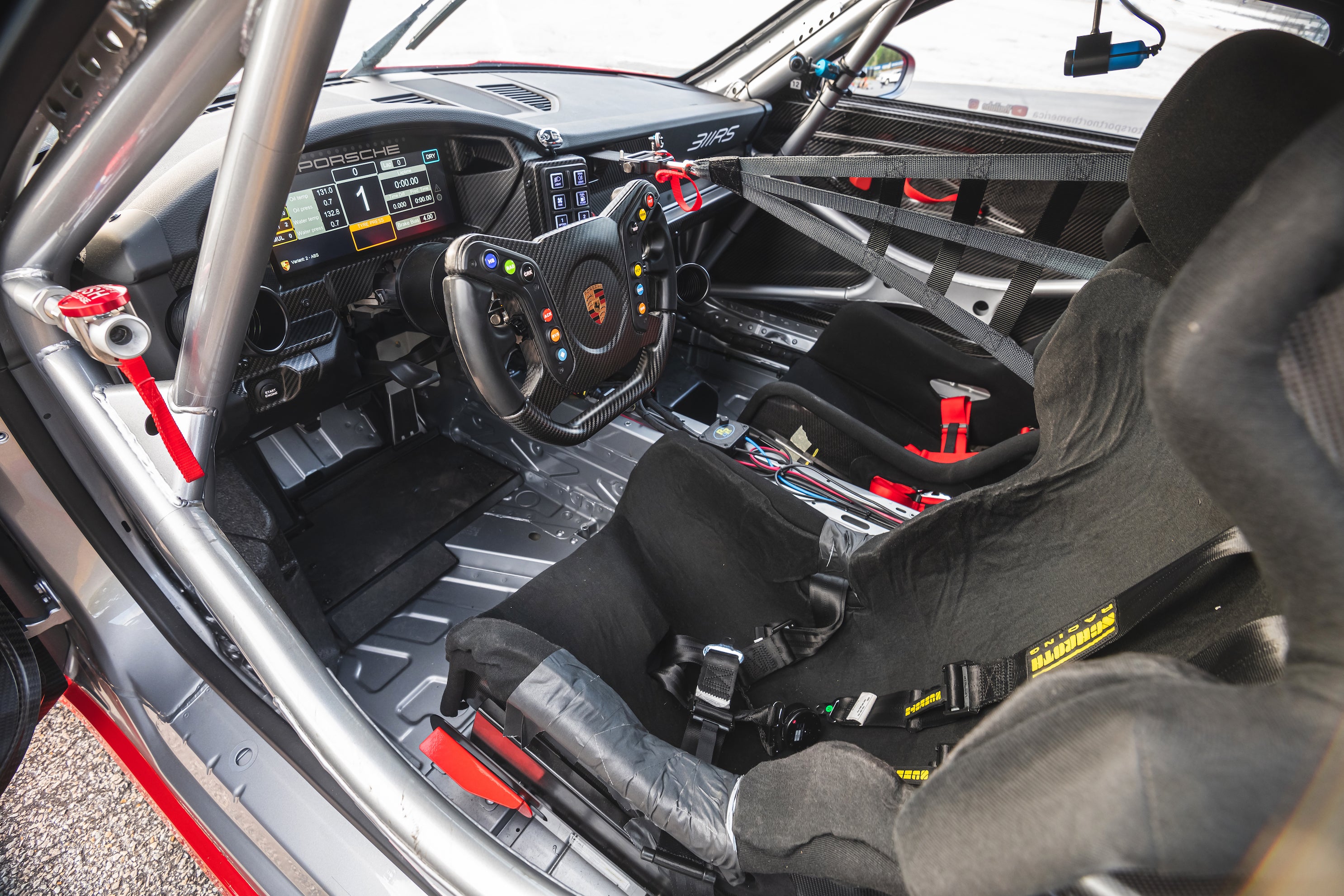 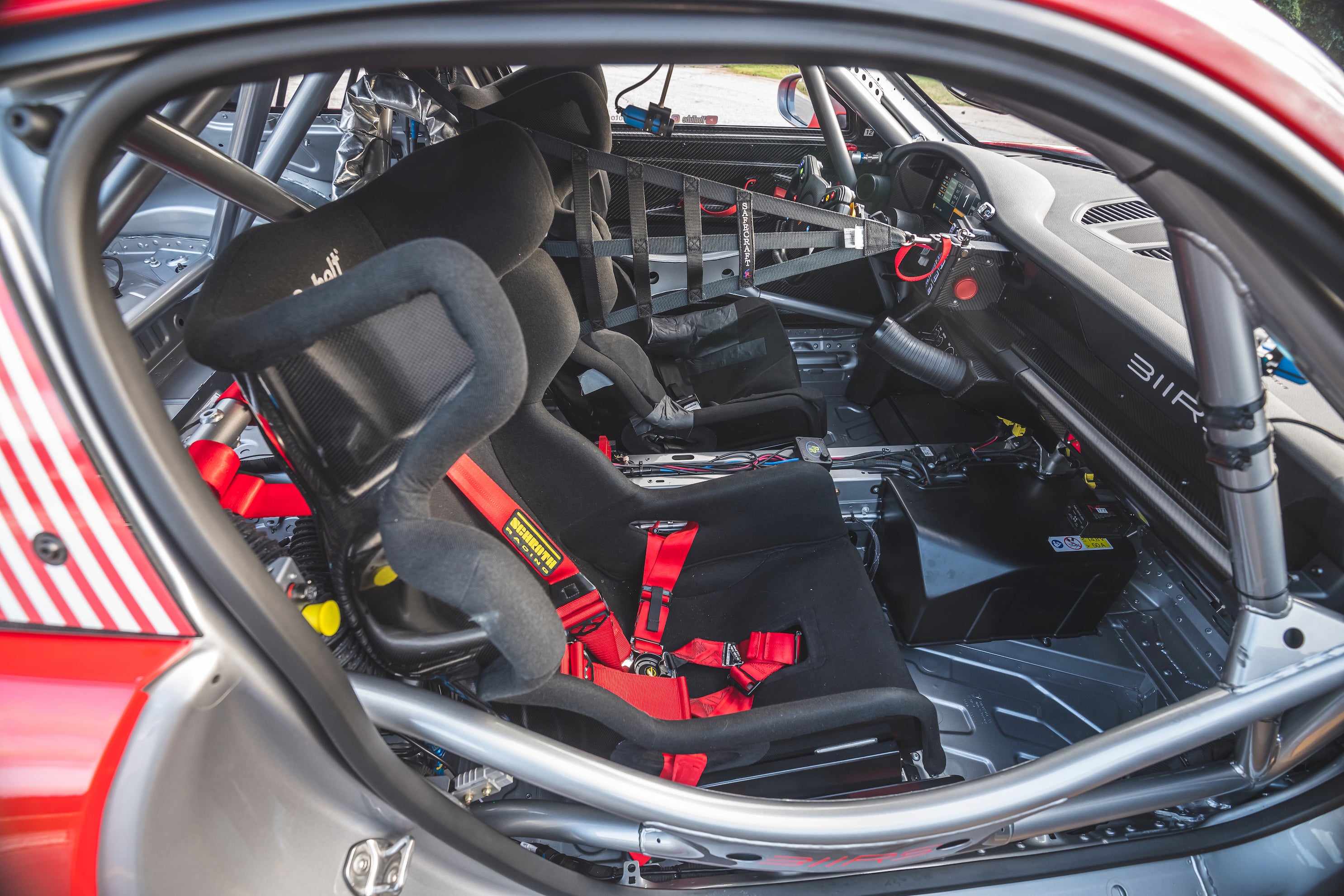 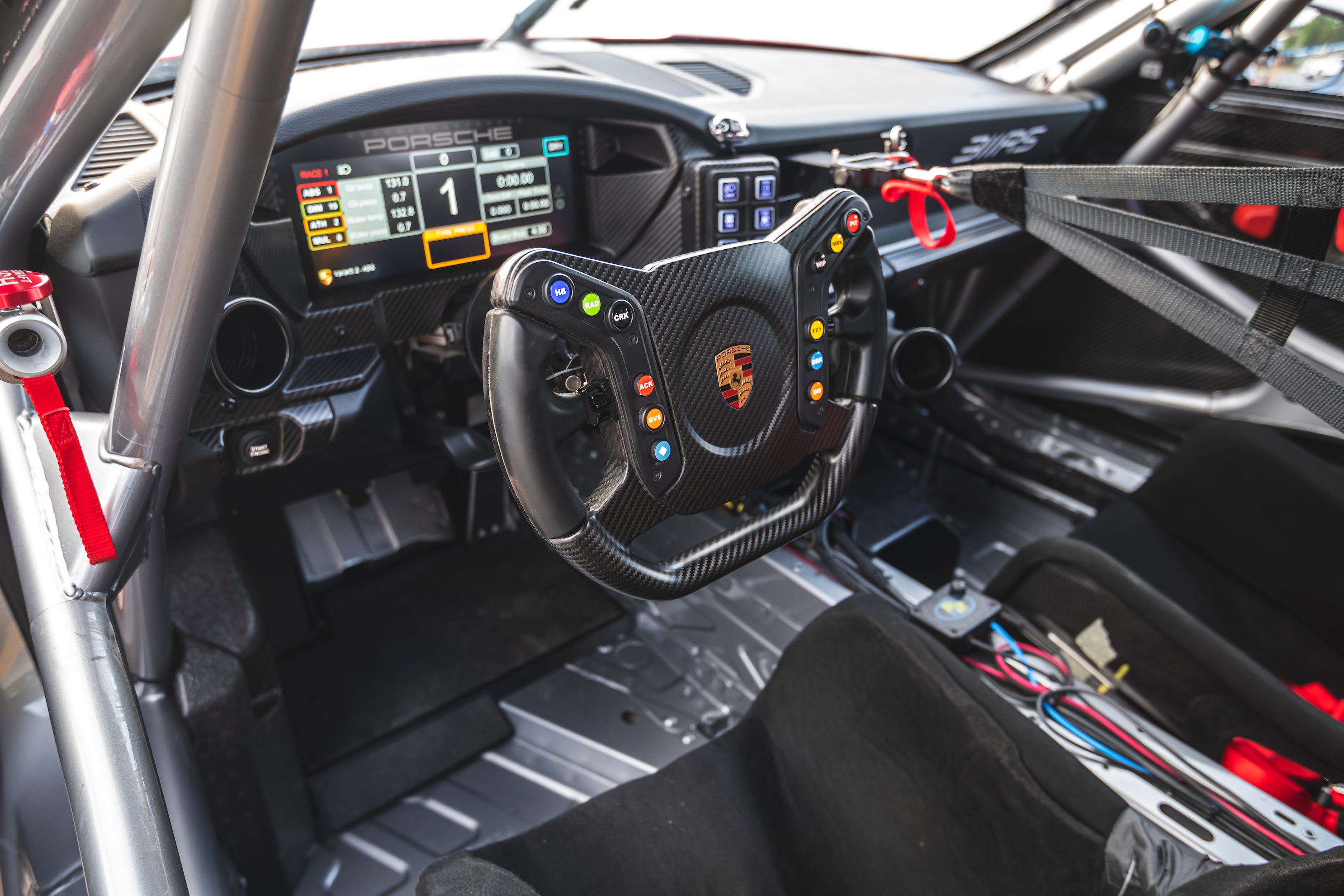 I suspect the GT3 Cup, in the right hands, can go within a second of the lap time of an IMSA GTD car around Road Atlanta. To put that in perspective, a GTD car costs two to three times what a Cup car costs and has more power and significantly more downforce. The Cup car is that good.

I’ve done a lot of cool things in my racing career as both a driver and a journalist, but this is the first time I’ve ever been able to step out of a street car and directly into the racing version it's based on. I had no idea what to expect, as every time you get into a new car you recalibrate your senses to whatever you’re driving is capable of. So if you get into a higher-performance version of that car months later, it doesn’t really allow you the same perspective as if you drove them back to back. I finally got that chance and it proved two things. First (and most obviously), how much better pure race cars are on track compared to their street car siblings. Second, how amazing both versions of GT3 really are.

I am seriously hoping this wasn’t my last go in the GT3, either the Cup car or the street car, as both are simply brilliant pieces of automotive hardware. The 992 GT3 street car is currently one of the most enjoyable and engaging street-legal sports cars on the planet. The Cup version takes all of the good stuff from that street car and dials it up to 11. If you can manage to talk your way into the driver's seat of either one of these cars, do so immediately. Or better yet, sell an organ (preferably non-vital) and pony up the cash to buy one. You will not be disappointed. 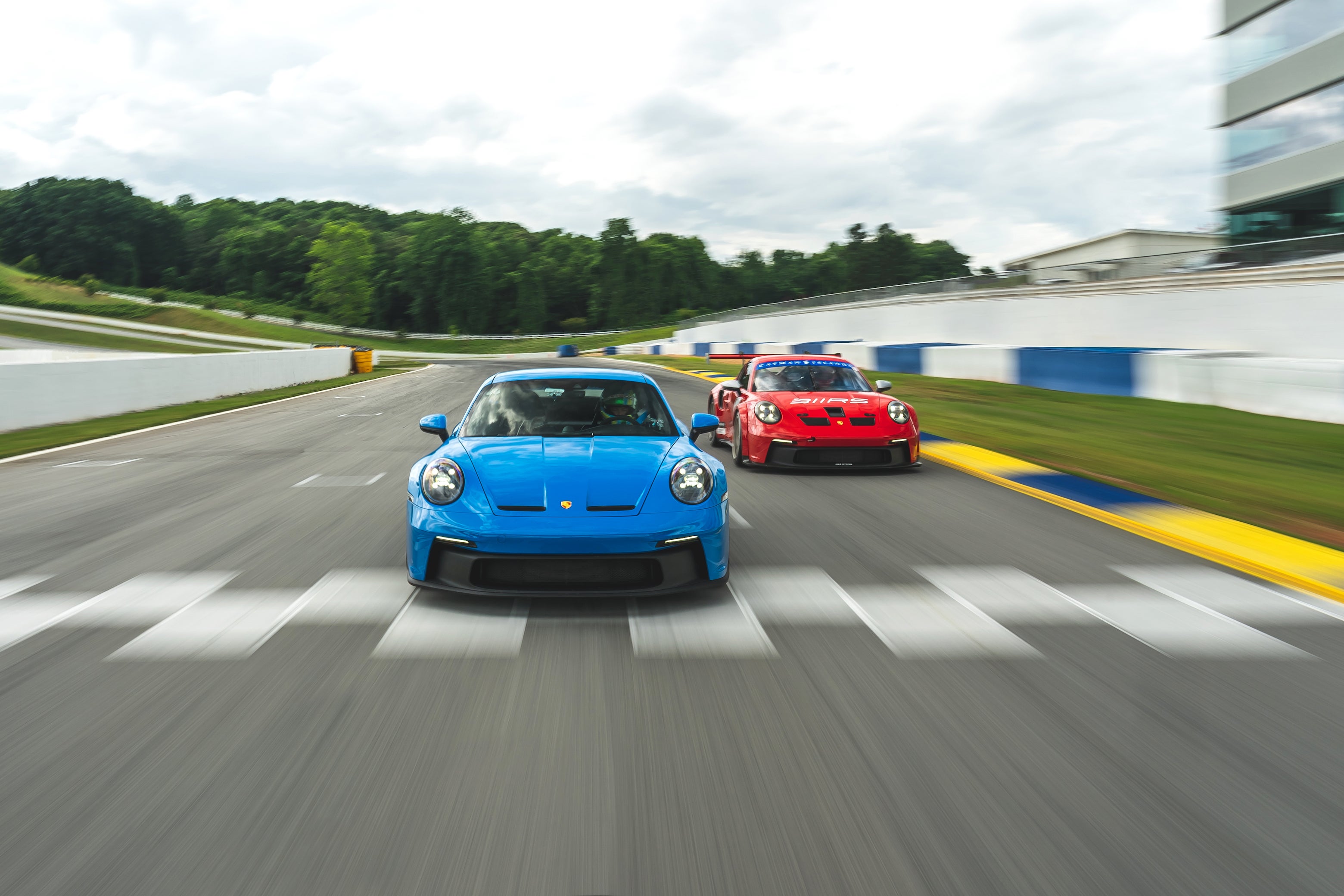 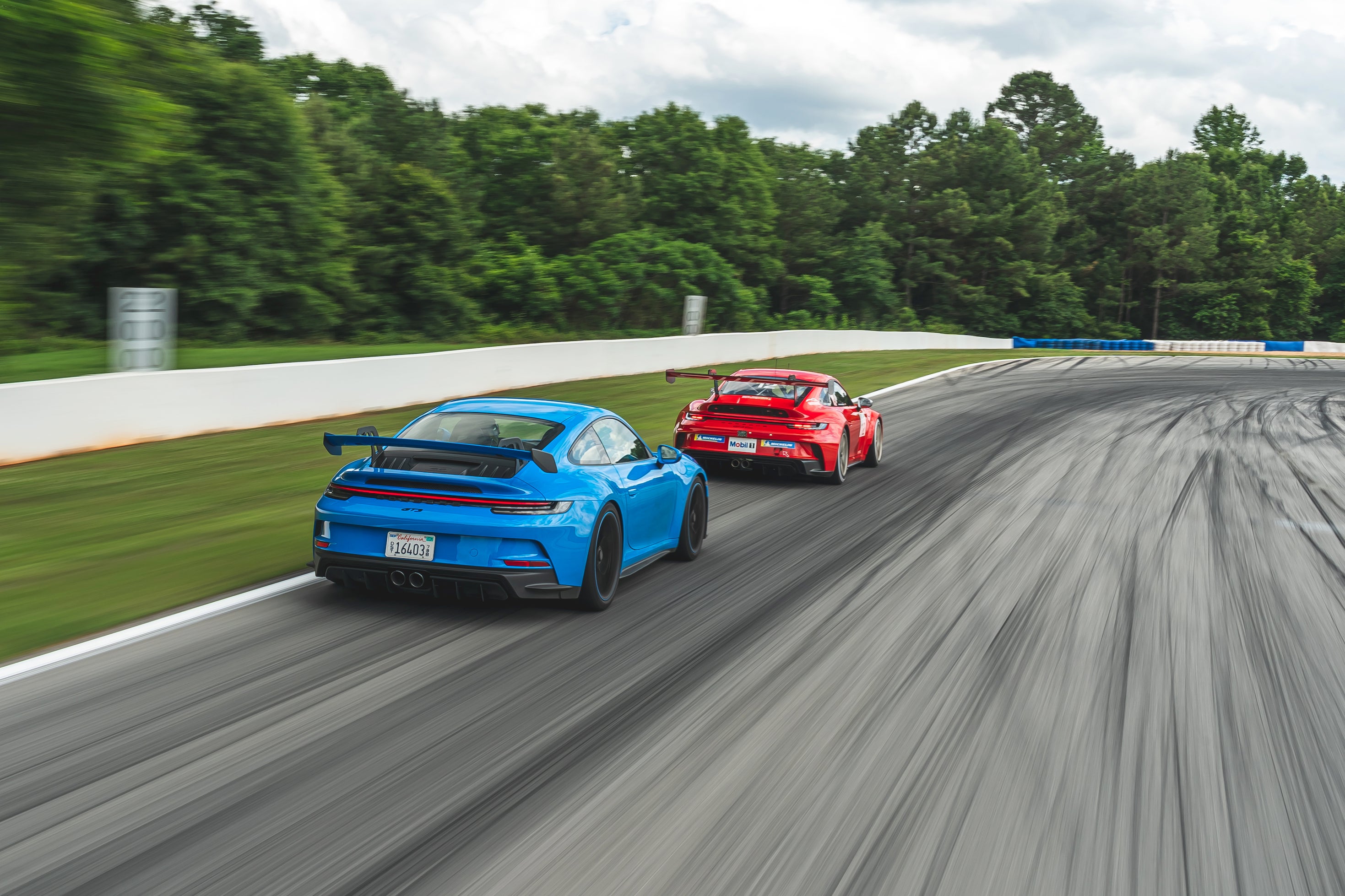 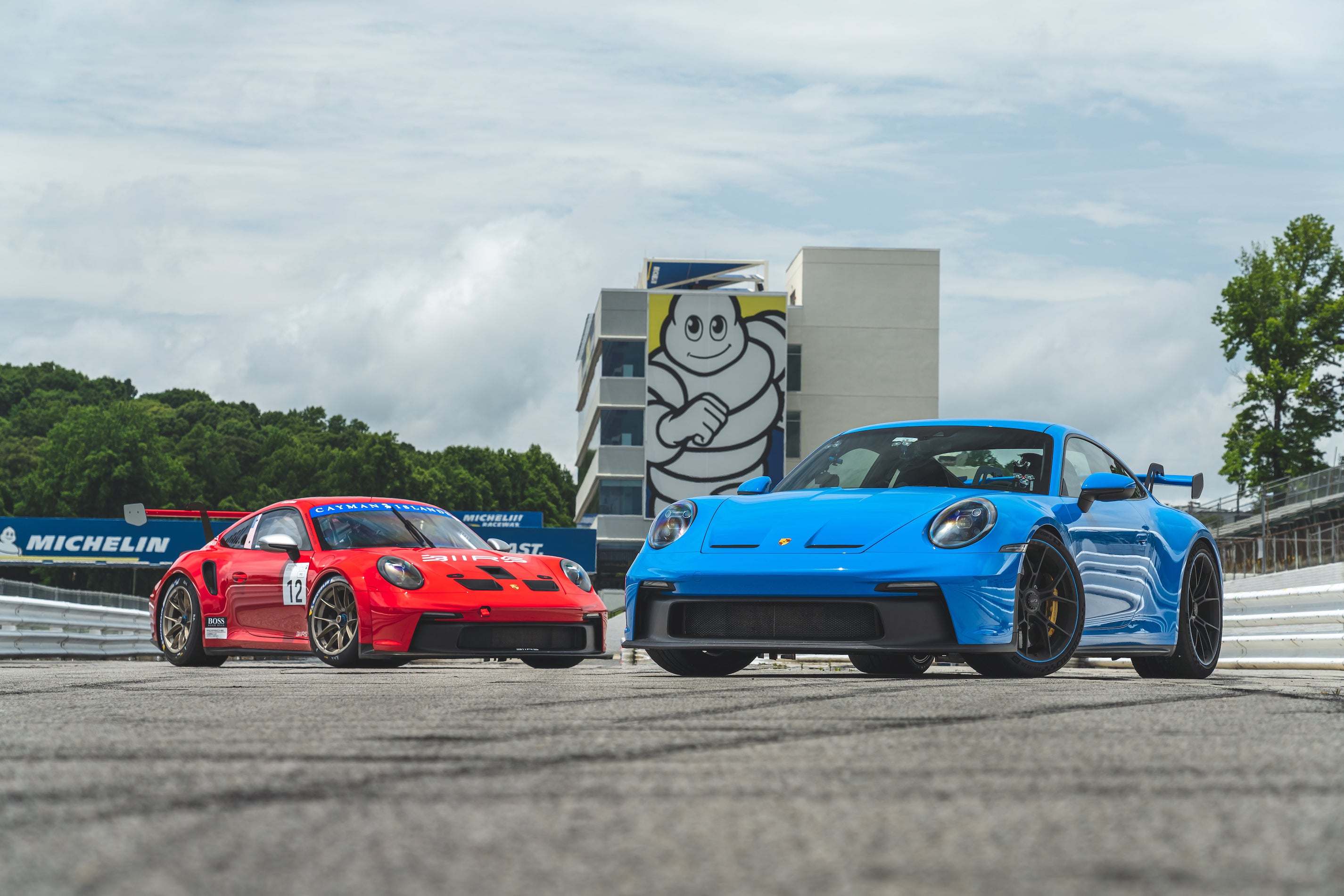 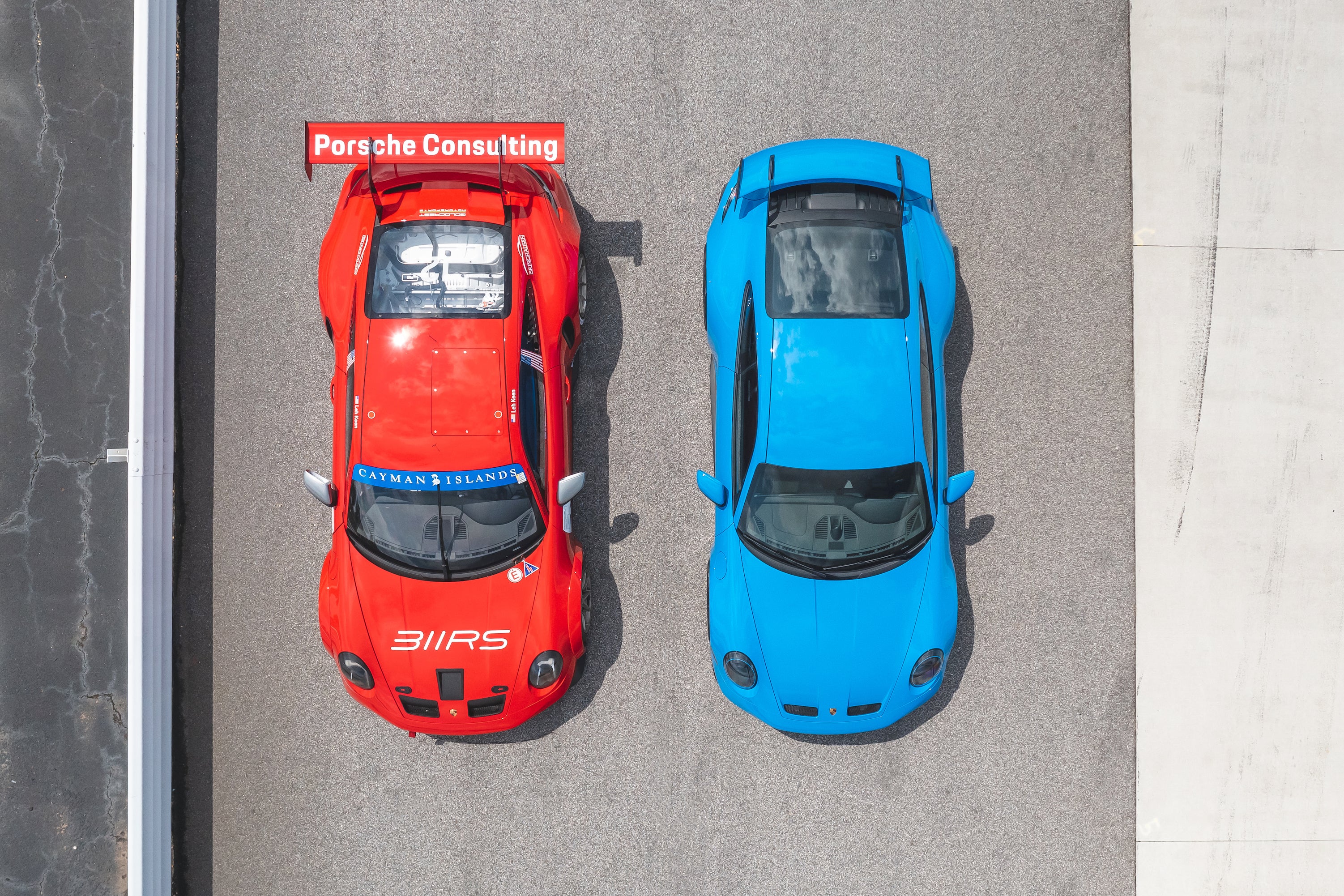