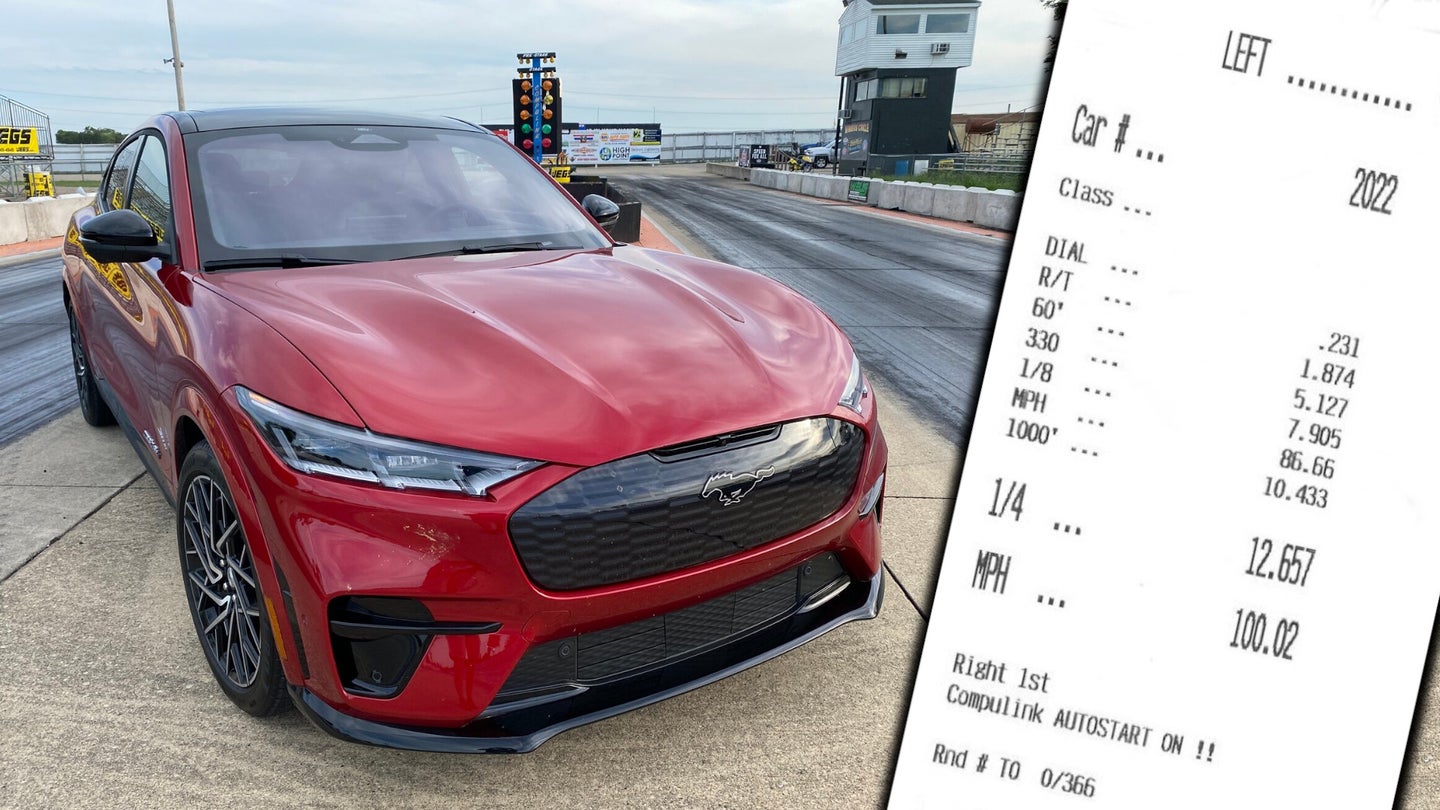 Electric vehicles have one major performance advantage over their ICE-powered forebearers, and that's torque. Electric motors can deliver peak torque from a standstill, giving EVs a serious edge when it comes to acceleration. Many owners thus enjoy taking their EVs to the drag strip to lay down some fast times. One owner of the new Ford Mustang Mach-E GT Performance Edition did just that, and posted the results online for your reading pleasure.

The GT Performance Edition boasts 480 horsepower, a hefty bump over the 346 hp of the Premium AWD model. Torque figures are healthy as well, with a full 634 lb-ft on tap to hustle the SUV down the road. The results from the strip are interesting to say the least, and the key figures are thus: a 12.657 second quarter-mile time at a trap speed of 100.02 mph, and 0-60 mph in 3.89 seconds minus the 1 foot rollout.

The key point of contention in the forums is the odd disconnect between the quarter-mile time and the measured trap speed. Lower-spec Mach-E models have posted slower 13-second quarter-mile times with higher trap speeds in the past. It suggests either the driver rolling off the throttle early, or some kind of loss of power towards the end of the run. Trap speeds closer to 105-110 mph would be more typical for a mid-12 second pass. A later post with performance traces showed the driver making multiple runs in the high 12s with similar or slower trap speeds, showing consistency at least.

For context, The runs were taken with the car at a 72% state of charge, with tire pressures in the realm of 39-42psi. The owner also noted that acceleration past 100mph was slow, to the point they suspected some sort of governor was in play. The runs were made with the "Unbridled Extend" mode turned off, a feature which intends to balance power output for lap-to-lap consistency when racing on track.

It's not perfectly clear whether these times are representative of the true capabilities of the GT Performance Edition trim. Ford's own figures claim it should be capable of a 3.5 second 0-60 time, and there's that question hanging over the trap speed that suggests a faster quarter-mile is possible too. But, thus far, they're the only figures we've got. They do tell us that Ford has built a swift and spritely SUV that's quicker than the rest of the range.

The results should give more ammunition to both sides in the ongoing debate as to whether the Mach-E deserves to wear the Mustang name. It's an argument that will rage on well into the future, of course. All we'll say is that the Ford Mustang Mach-E GT Performance Edition has an incredibly long name that makes headlining articles difficult, and it appears to be the fastest model in the Mach-E range. Right now, that's all we need to know.