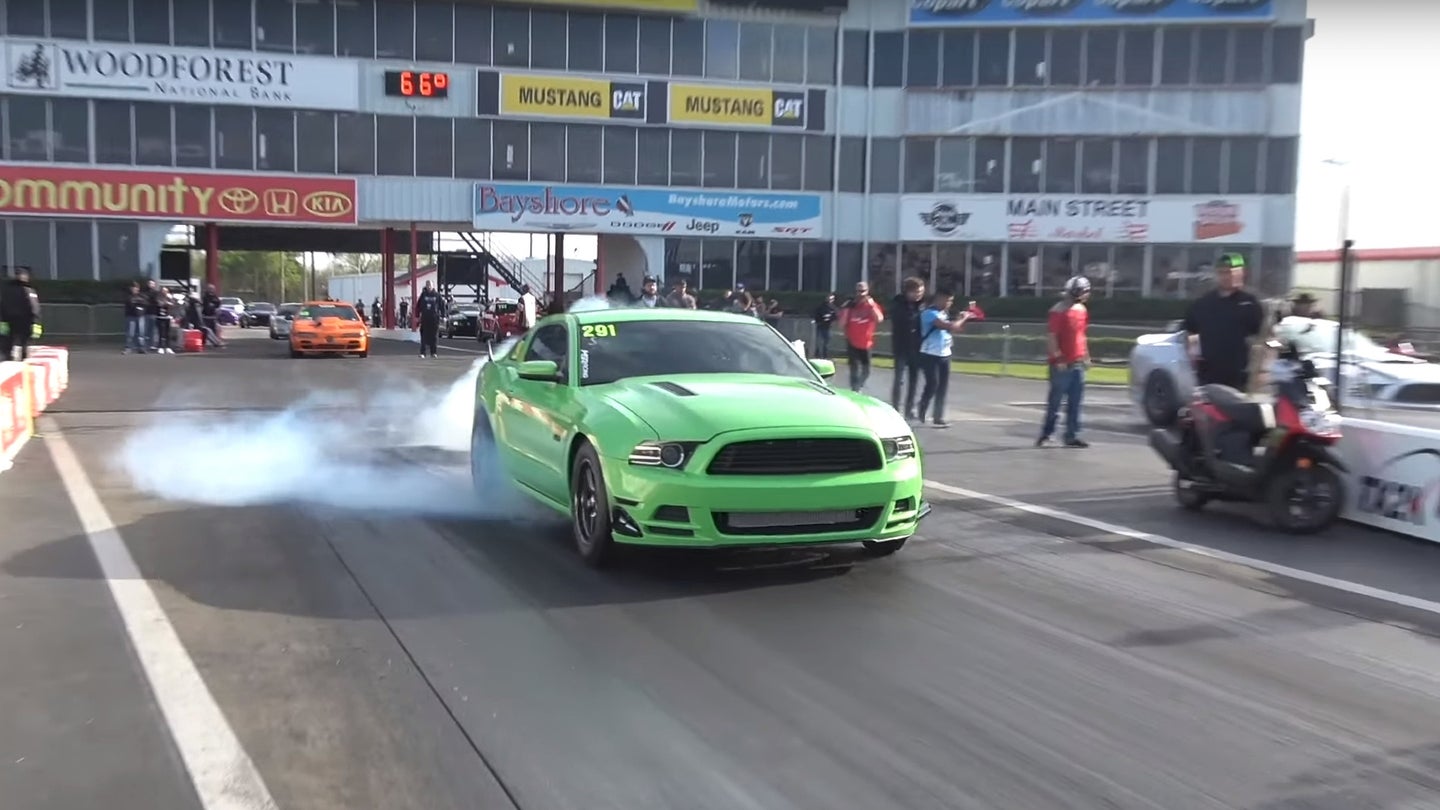 The Ford Mustang is undoubtedly a hot topic in the world of drag racing, as clearly exhibited by one of the most recent cars to hit the strip. YouTube's "That Racing Channel" recently caught a heavily built fifth-generation Mustang GT smashing the quarter-mile to smithereens in almost seven seconds.

Brett Lasala owns the green Mustang he dubbed the “Snot Rocket.” Not only did Lasala strip the car to shed weight, he built up the 5.0-liter Coyote V8 to churn out an eye-watering 2,000 crank horsepower, which roughly translates to about 1,675 wheel horsepower. It’s as purpose-built as dragsters can get.

Lasala, however, claims that the Snot Rocket is still road legal, retaining all of the car’s factory body parts, its power windows, glass, and even its air conditioning system.

According to MustangForums, Lasala bought his ride back in 2014 as a used 2013 GT and he spent the last five years building his machine to its current specification.

As a testament to the durability of Ford’s Coyote V8, Lasala’s build reportedly still uses the stock crankshaft and head castings. All that’s been done internally is a set of upgraded valves and valve springs, along with reinforced Manley Performance connecting rods, Diamond Racing pistons, and a customized cam profile.

Then, the engine’s bolted up with a twin Precision 64 turbochargers with a Plazmaman billet intake manifold resulting in a whopping 35 pounds worth of boost. To top it all off, Lasala says that he still drives it on the street frequently for runs down to the supermarket and back.

Lasala isn’t done however as he reportedly wants to tune his Mustang to churn out even more power. So if you see Lasala out on the streets, don’t tempt him for a stoplight drag competition as it’s likely you won’t even stand a chance against him.

This car nearly broke the once-unfathomable 10 minute barrier at Pikes Peak last year and, if you have the money, it can be yours.

Twin-Turbo, 1,200-HP Drag Racer May Be the Fastest Cadillac Escalade in the World

Sporting a 427-cubic-inch V8 and slick tires all the way around, this Caddy can put up a fight against even the most exotic supercars.