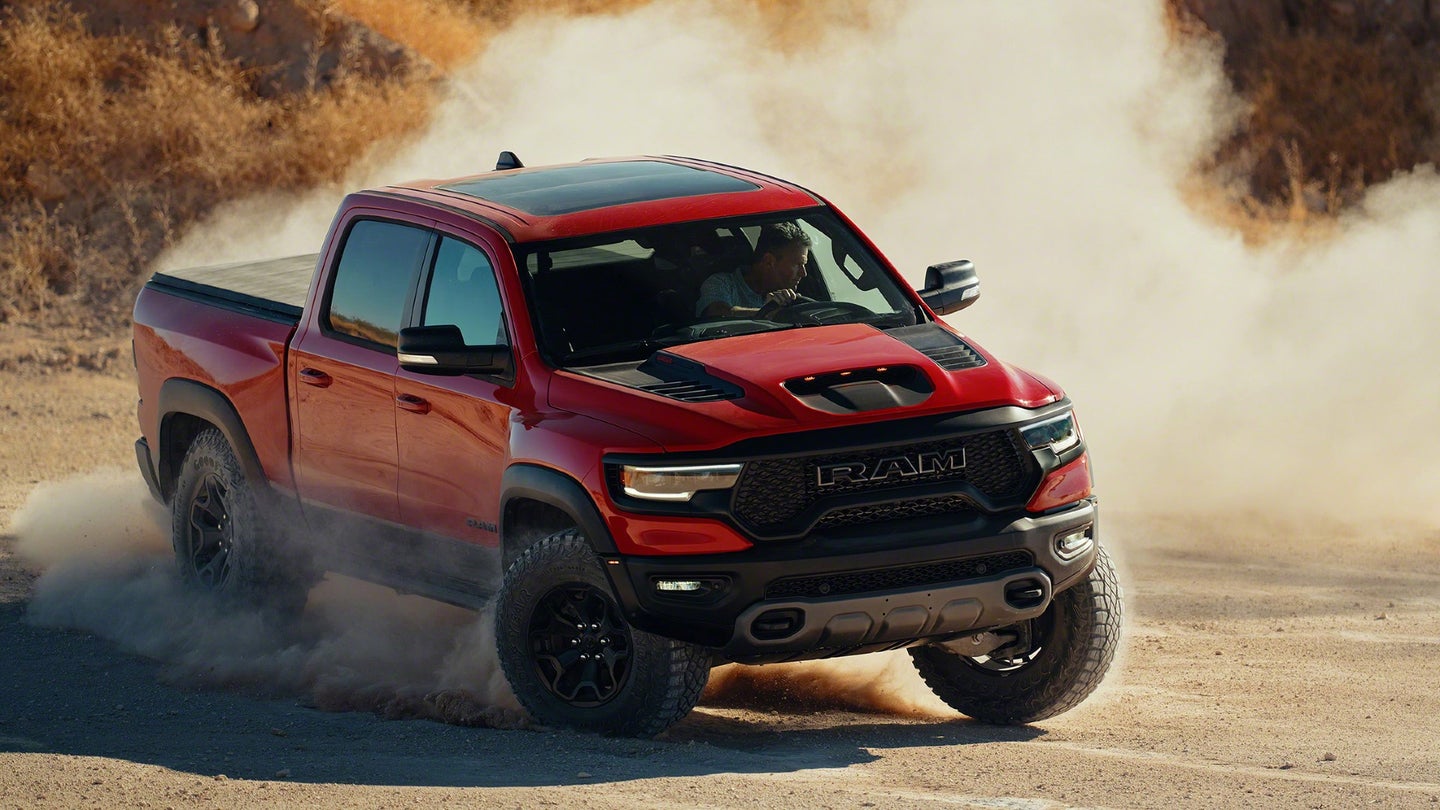 Every off-road performance pickup will inevitably be compared to the Ford Raptor. It's been the best in the business for nearly a decade, partly because it's been the only one of its kind sold in the United States. That changes with the 702-horsepower Ram TRX which not only packs a lot more power but also a suspension system that promises better off-road capabilities. This is where the Raptor has always shined, so what makes the Ram's running gear different and, perhaps, better?

Right off the bat, the biggest difference: There are no leaf springs to be found on the new Ram TRX. The automaker shifted away from the centuries-old concept in 2009 and has relied on four-corner coil springs in its 1500 pickup ever since, providing a smoother ride while retaining the toughness you expect from a truck. The current Raptor still has leafs over the back axle, which negatively impacts wheel articulation and travel. Ford is reportedly thinking of changing this for the Raptor's next generation, but Ram has been perfecting full-size truck coils for years.

Now, the TRX does give up a huge chunk of payload capacity compared to normal Ram 1500s, landing at 1,310 pounds, but then again it isn't meant to work. This is a truck that can do 118 miles per hour on pavement, dirt, or sand. The Raptor has an extremely similar if technically better max bed capacity of 1,366 pounds. And the difference in towing is equally scant—8,100 pounds for the Ram and 8,000 pounds for the Ford.

Anyway, back to hooning. The Ram's unique five-link rear coil setup allows the rear wheels "more than 13 inches of travel" according to Ram, which sounds in the ballpark of the current-gen Raptor's 13.9 inches. But wouldn't it say "nearly 14" if the TRX had matched Ford's figure? This one will be a puzzle until we can get a definitive measurement from Ram. Likewise, the approach angle is identical for both the crew-cab TRX (its only configuration) and Raptor at 30.2 inches. The Ram has a slight advantage in breakover—21.9 degrees compared to the four-door Raptor's 21.8—and the same goes for departure, with the Ram boasting 23.5 degrees and the four-door Raptor, 23 even.

Ground clearance is close but, again, the Ram TRX edges out the Raptor, but only just at 11.8 inches to the Ford's 11.5 inches. With that possible exception, none of these small margins between the two trucks will make a big difference in any off-road scenario. What will make a difference, at least as long as they make it in this configuration, is the stubbier SuperCab Raptor's 133-inch wheelbase, nearly a foot shorter than the crew cab TRX.

In theory, the Ram's biggest advantage is ride comfort and absorption. Unlike leaf springs, which have to locate the axle, coils have just one job to do, and that's manage compression. With help from the 2.5-inch Bilstein Black Hawk e2 adaptive shocks, the TRX suspension has three zones of progressive bottom-out control. Dual Electronic Proportional Valves also constantly adjust damping so the truck is up-to-speed with the changing surfaces beneath it.

The Ford Raptor relies on 3.0-inch, twin-tube Fox dampers that also adjust in real time, and it's got a handy jump sensor that can pre-load the suspension in midair to avoid bottoming out on a landing.

Lastly, coil spring suspension systems are vastly more tunable than leaf springs, where much of the geometry is set in stone. Of course, for drivers who aren't quite sure how to perfectly tune a truck for their specific use-case, Ram has packaged a suite of drive modes and easily-adjustable settings for the TRX's suspension. These are accessible through the 7-inch instrument display while the Ram's Off-Road Pages show ride height, pitch, roll and more in each of the available drive modes: Normal, Wet/Snow, Off-Road and Baja.

It's now Ford's move to show how it can compete against the hammer-wielding TRX, and it's doubtful that the next Raptor will be anything short of stellar. Question is, how will it keep up with the Ram's Hellcat V8?