Watch How the Iconic Bigfoot Monster Truck Gets a Tire Change

The tricky part is the tires are 10 feet tall. 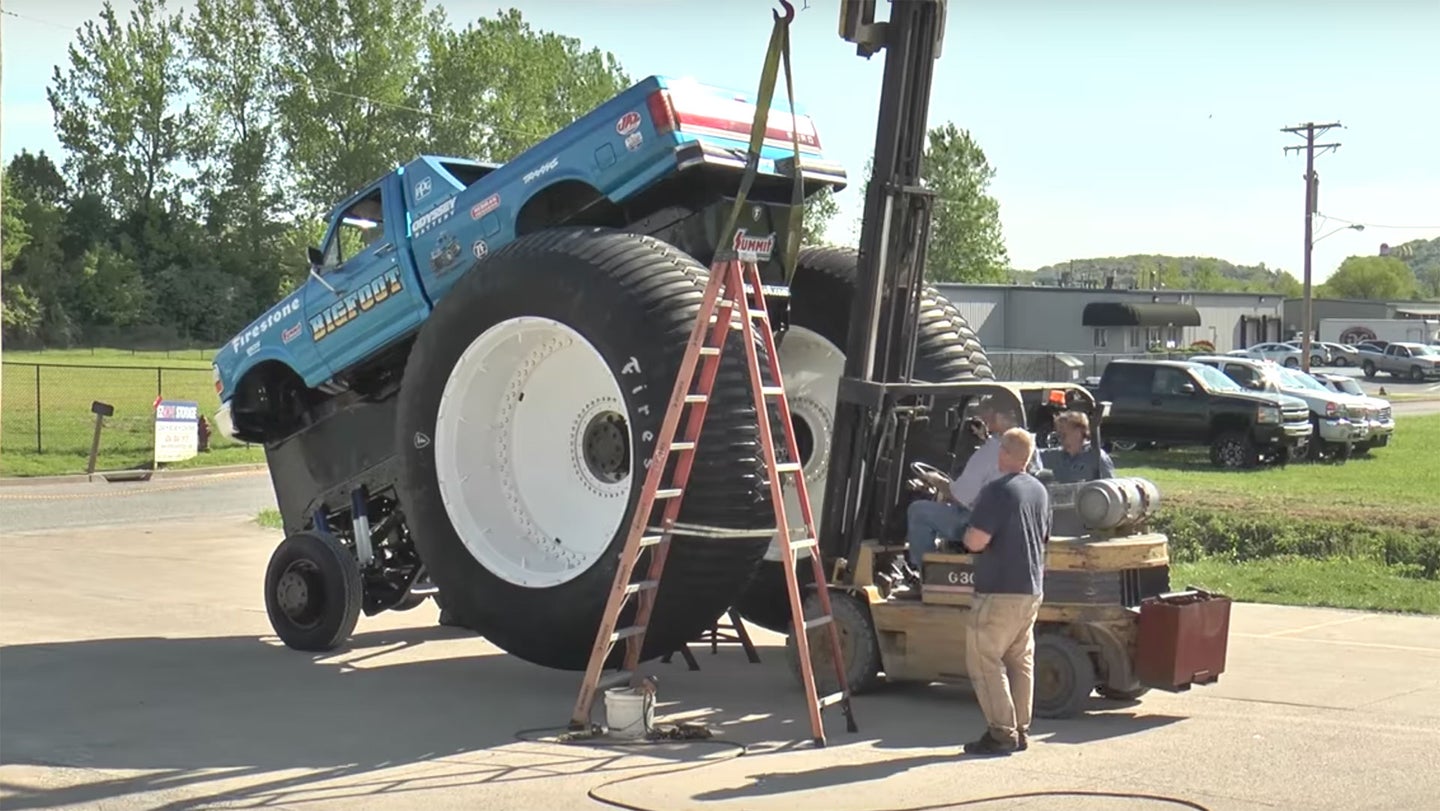 When we were little, iconic monster trucks like Bigfoot, Grave Digger, Max-D and El Toro Loco were always on the TV. Although each of these trucks had plenty of fame, every household knew the name Bigfoot. Each of these trucks had a slightly different set up and the Bigfoot gang always had several different suspension configurations with Bigfoot #5 being less capable of landing a sixty foot jump. Still, the Bigfoot team was and still is one of the founding fathers of monster trucks and the fifth iteration built in 1986 proudly stands over 15 feet tall on an Ford OBS platform.

Due to the size of the vehicle, changing tires is a real process that requires massive jacks, fork lifts, and a lot of careful maneuvering. Once the tire change is done, the operator has to climb up the rear suspension/axle to get into the vehicle. Since the Bigfoot team opted to stay close to the original length of the vehicle, the two sets of tires come extremely close to one another, making it easy for the operator to walk between the two as he enters the vehicle. Once the truck turns over, you get to see the careful driving needed to do the simple action of turning the truck around. As you might guess, Bigfoot #5 isn't going into arenas and jumping cars, instead it is more of a show truck.

If you aren't familiar with this particular truck's setup, it is worth mentioning a few interesting statistics. Although the overall cab size of the truck appears standard, it actually weighs 28,000 pounds in total and the frame is two truck frames stacked on top of one another, connected to 5 ton military axle. The engine is a 460 cubic inch V8, providing plenty of power to get each 2,400 pound tire rolling, but not enough to break any records. If these tires look at all familiar it is because they were originally used on the Alaskan Land Train, a fascinating engineering accomplishment that unfortunately didn't last very long.

The surprisingly buoyant diesel toy truck of your dreams.

The Infamous Youabian Puma “Exotic Monster Truck” is For Sale

Even at $205,000 off, the world’s bulgiest automotive monstrosity is still a tough sell