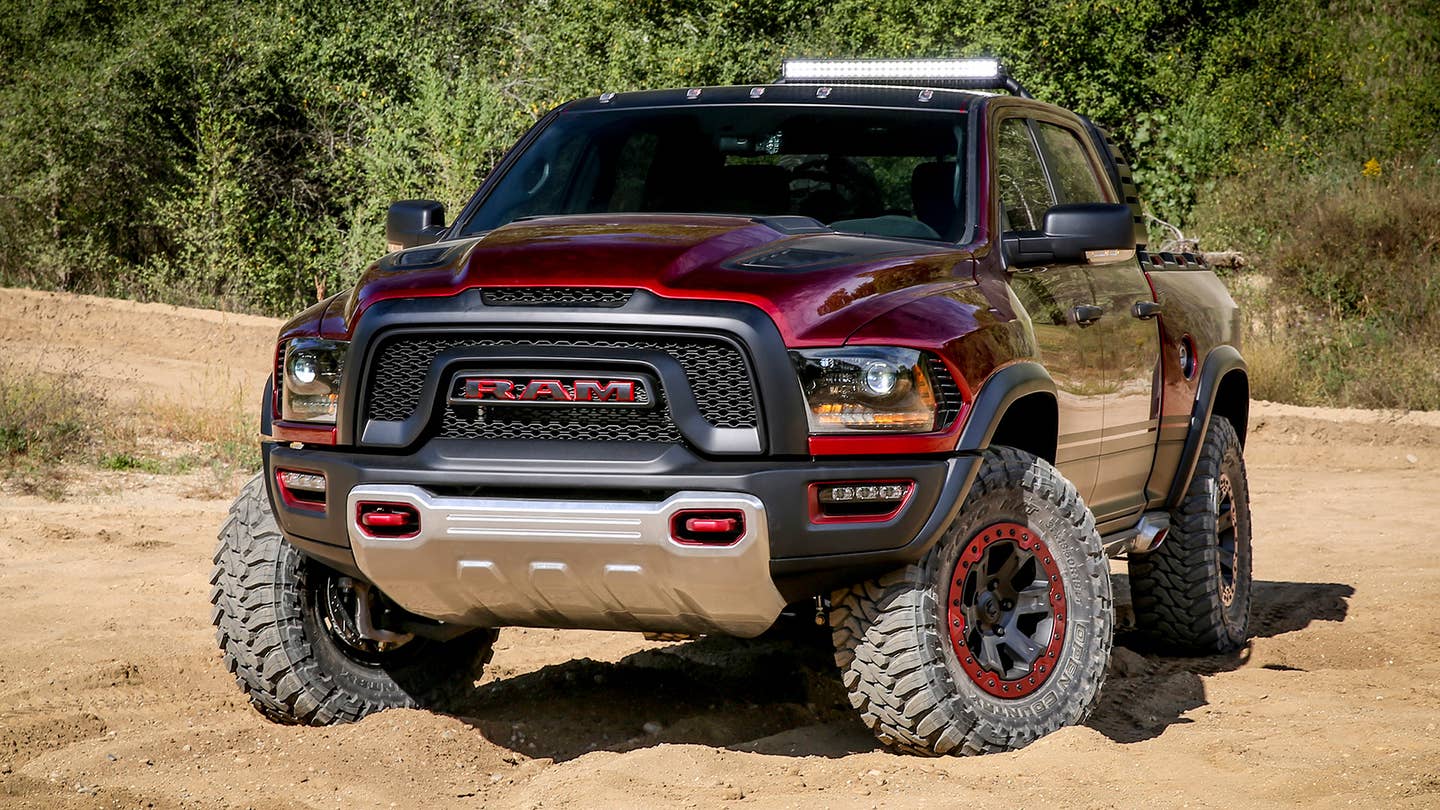 Cramming the beautiful Hellcat V8 into vehicles that really don't need that much power seems to be a trend at Fiat Chrysler Automobiles. Back in May, FCA revealed the 707-horsepower Jeep Wrangler Trailcat; now, the Hellcat-powered Ram Rebel TRX concept truck has arrived, packing a 575-horsepower version of the much-loved supercharged engine.

The Ram Rebel TRX concept, unveiled Thursday, is what happens when Ram engineers come together to build a truck that can take on off-road obstacles at unreasonable speeds. Plopping the Hellcat Hemi into the Ram causes the engine to lose 132 horsepower compared with its Mopar brethren, but that should still be enough to waste other trucks when the light turns green;. Dodge claims that with this motor, the Rebel TRX is the most powerful factory-engineered half-ton pickup ever built.

The truck has Ram's TorqueFlite eight-speed automatic transmission with paddle shifters and a handful of four-wheel-drive drive modes to pull it out of whatever sticky situations it might find itself in. Those modes include "Normal," "Wet/Snow," "Off-Road," and "Baja." (We assume Baja is the one for chasing down Ford Raptors.)

13 inches of travel for each wheel—40 percent more than a normal Ram—and 37-inch tires allows the truck to travel over or around off-road hazards at speed. Ram claims that with its heavy-duty suspension setup, the Ram Rebel TRX is capable of off-roading without issue at speeds of around 100 miles per hour. The truck maker also says that the steel frame used on the Rebel TRX is pretty much the same as what's used on the Ram 1500.

From the pics Ram has provided, it appears the Rebel is equipped with a massive skid plate attached to the front-end, which would make sense, given its intensive off-roading nature. There's also a video-game-like pistol grip-looking shifter, and what appear to be five-point safety harnesses for seat belts. And are those side pipes we see?

Long story short: the Hellcat-powered Ram Rebel TRX is the Ram Rebel we always wished the carmaker would build. It has the beefy looks and the actual performance potential to back it all up. Now, all FCA has to do is actually produce the damn thing. Please, Ram? Please?