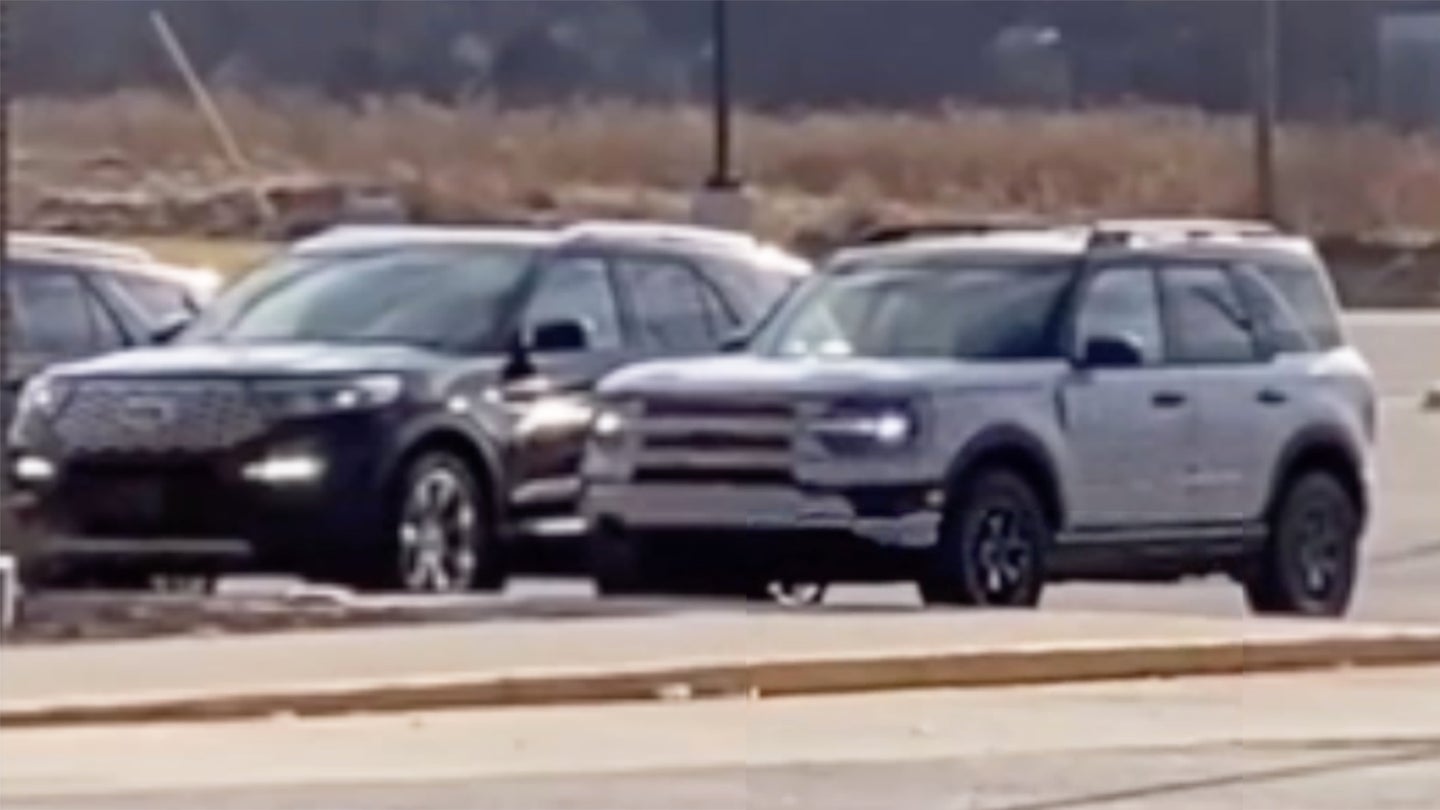 At this point, it almost seems normal to hear about another 2021 Ford Bronco leak with each passing day. To give the automaker some credit, everything about the larger Bronco and smaller Bronco Sport was kept under wraps longer than expected—but when the floodgates opened up, they really opened up. This latest spy shot shows the Bronco Sport completely out in the open parked at an unnamed Ford facility, and helpfully, it's sitting next to a new Explorer to offer the first clue about the so-called Baby Bronco's real size.

Eagle-eyed Bronco Sport Forum member 93_SVT_3503 grabbed a video of the new SUV, viewable at this link, and we've screengrabbed a few choice frames to embed here. The good news is the Ford Bronco Sport is notably smaller than the Explorer. Deep into the age of model bloat, I'm happy to see there are still some appropriately sized vehicles sneaking through. Though its hood and roof appear to sit at roughly the same height as the Explorer's, the Bronco Sport's flat beltline is lower, its front and rear overhangs are stubbier, and its wheelbase is much shorter.

Those of us with fond memories of early SUVs—like the old body-on-frame Explorer—have an additional reason to smile. From this angle, the blocky design of the new Bronco Sport sure looks like the tastefully rectangular first-gen Explorer produced between 1991 and 1994. It seems like Ford has really driven that throwback feeling home, and we're here for it.

This truck does appear to be wearing some camouflage as its flat fascia doesn't quite match the undisguised version seen earlier this month. This is the first time anyone's snagged a photo of the Bronco Sport with its headlights on, though, revealing a cool DRL accent line running from the rounded projector lamp to the edge of the grille.

Granted, unlike the larger, Ranger-based 2021 Bronco, the Bronco Sport rides on the same FWD platform as the new Ford Escape crossover. At least it looks the part. Also, at the very least we know that Ford's not planning on offering a FWD-only Bronco Sport, and the same order guide leak that brought that information also promises a choice of 1.5- and 2.0-liter EcoBoost engines with 187 and 250 horsepower, respectively. Ground clearance looks respectable.

As mentioned, this is by no means the first time the Bronco Sport sighting. At this point, you really can't help but wonder if all these leaks are part of Ford's wider marketing strategy. We've seen everything from up-close shots of the Bronco Sport without camouflage to Bronco Sport order forms get out this month, not to mention several photos and details of the larger Bronco.

The official debuts of the new Bronco and Bronco Sport have been postponed indefinitely amid the COVID-19 pandemic, with no word from Ford on when they'll be rescheduled. Ford's big Bronco reveal date in March has already come and gone, and the Bronco Sport's scheduled unveiling in April sure looks iffy after its rumored New York Auto Show extravaganza was pushed back. The Drive will keep you updated as soon as we know—or as soon as someone leaks more details before Ford gets around to it.