Ford took the Baby Bronco for a spin in public, and we've got the high-resolution pictures. 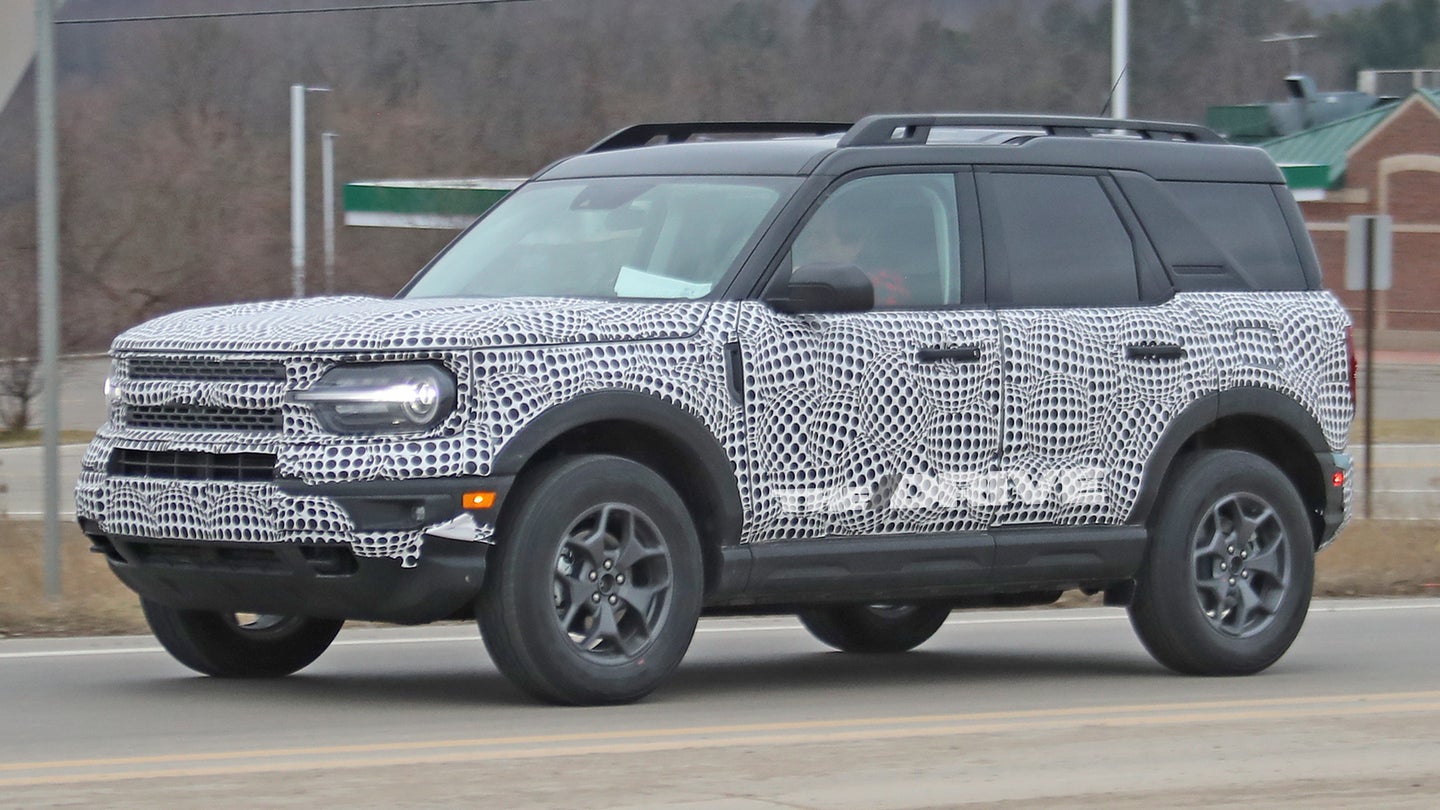 We know, we know. Yet another report on new pictures of the 2021 Ford Bronco Sport. The world has already seen photos of an undisguised production model in a few grainy images leaked from within a Ford facility earlier this month, and yesterday brought a glimpse of the rugged crossover parked next to a Ford Explorer to offer our first hint at its true size. Today, the latest batch of spy photos shows the Bronco Sport up close and crystal clear for our best look yet at the new trucklet.

The Bronco Sport's bottom half still sports a dazzle camouflage wrap, but again, it's not hiding anything we haven't seen before. Several crucial design elements are easily distinguishable in these high-resolution shots, taken in southeastern Michigan, including a slightly-stepped roofline that wasn't quite as apparent in the precious leaks. Every Bronco Sport we've seen so far has a roof rack as well. 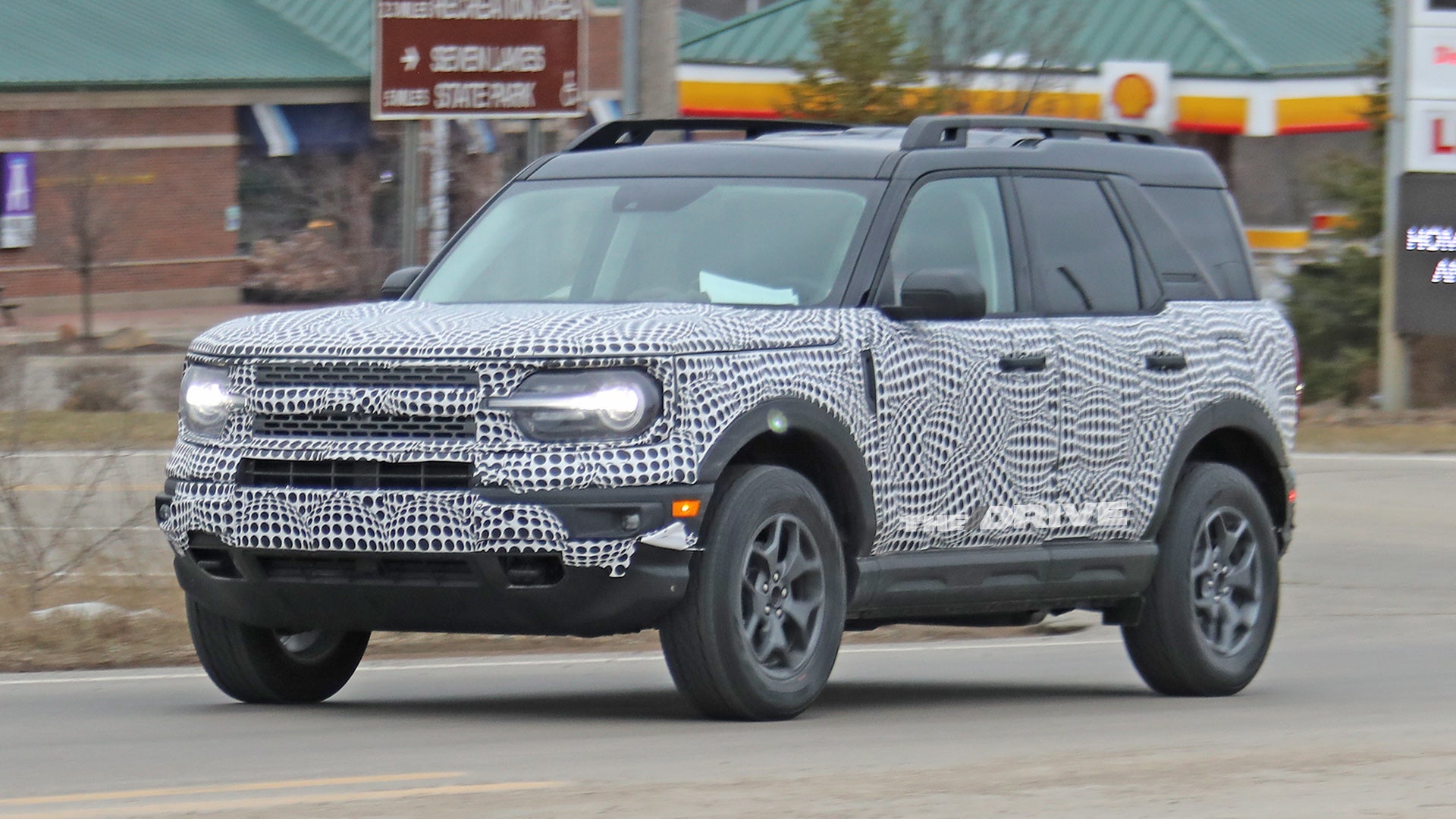 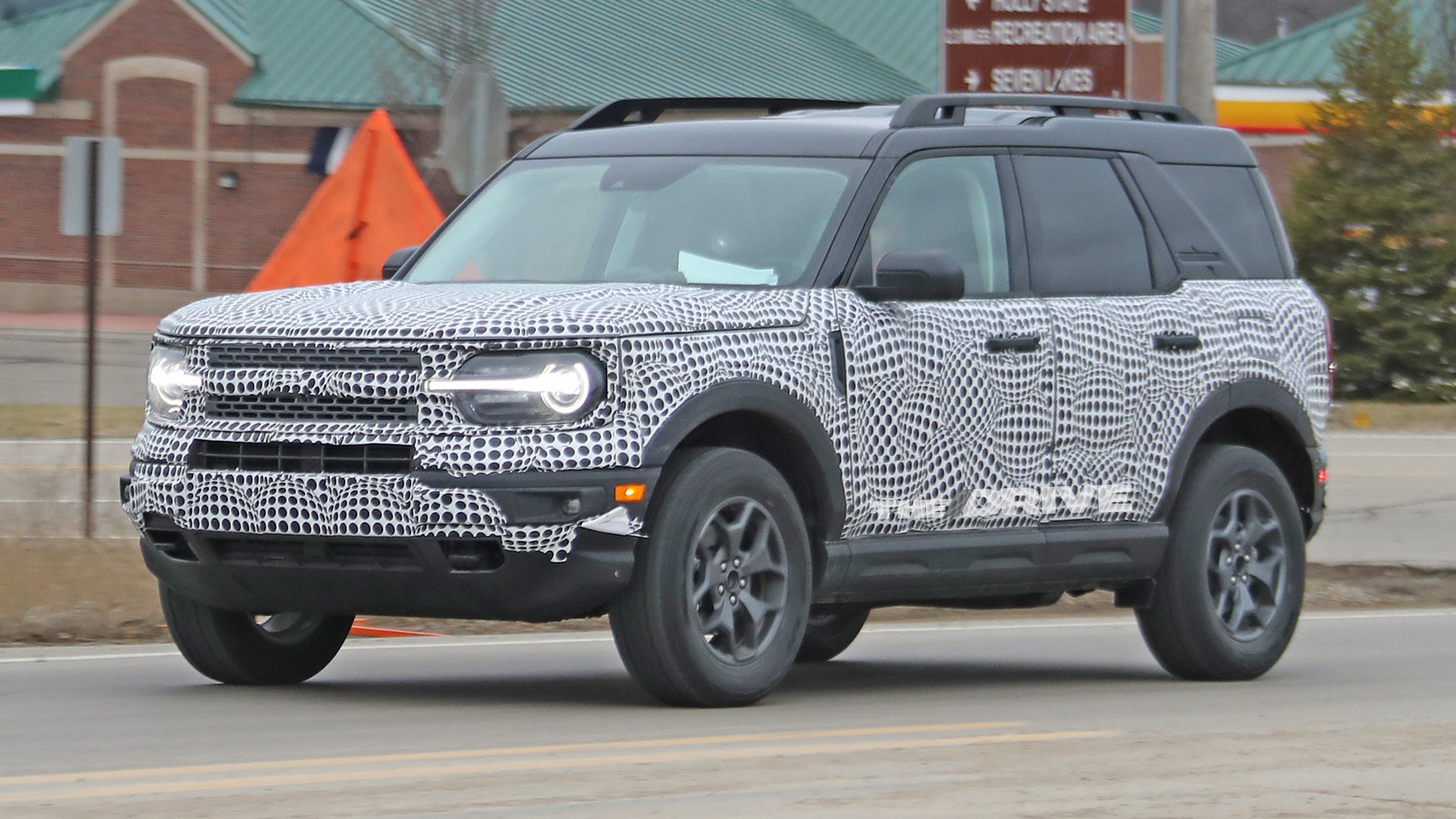 These photos show the overall boxy shape is pretty reminiscent of the second-generation Ford Escape, which is an interesting connection considering the Bronco Sport is built on the current Escape platform. Even the slant of the C-pillar and shape of the cargo area windows are familiar. See for yourself:

These pictures also highlight how the two-tone color scheme between the body and blacked-out pillars and roof will really stand out. If you're going to draw attention to a car's beltline, you better make it pleasing to look at. Ford's doing just fine with this flat-as-Nebraska bisection—note the small upward kick at the back of the rear door to match the full-size Bronco.

Black fender flares are also exposed, further reiterating that the Bronco Sport is built for more than just around-town roundabouts. Backing up what we saw in a leaked video posted to Bronco Sport Forum on Monday (this appears to be the very same truck, given the torn camouflage around the front left fog light surround), the model's ground clearance looks very solid for a smaller unibody crossover, and its expected standard all-wheel-drive should aid its off-road capability nicely. It's also anticipated to be fairly agile given its small wheelbase, while the tucked-in front and rear bumpers provide decent approach and departure angles.

The front fascia has been hidden for this outing near Holly State Recreation Area, about an hour outside Detroit, save for the headlamps and a blessed amber indicator/accent light on the bumper. But those headlamps are fully illuminated in much greater detail than we saw yesterday to show off the DRL-projector lamp design. Hidden in the middle of the grille is a BRONCO badge. 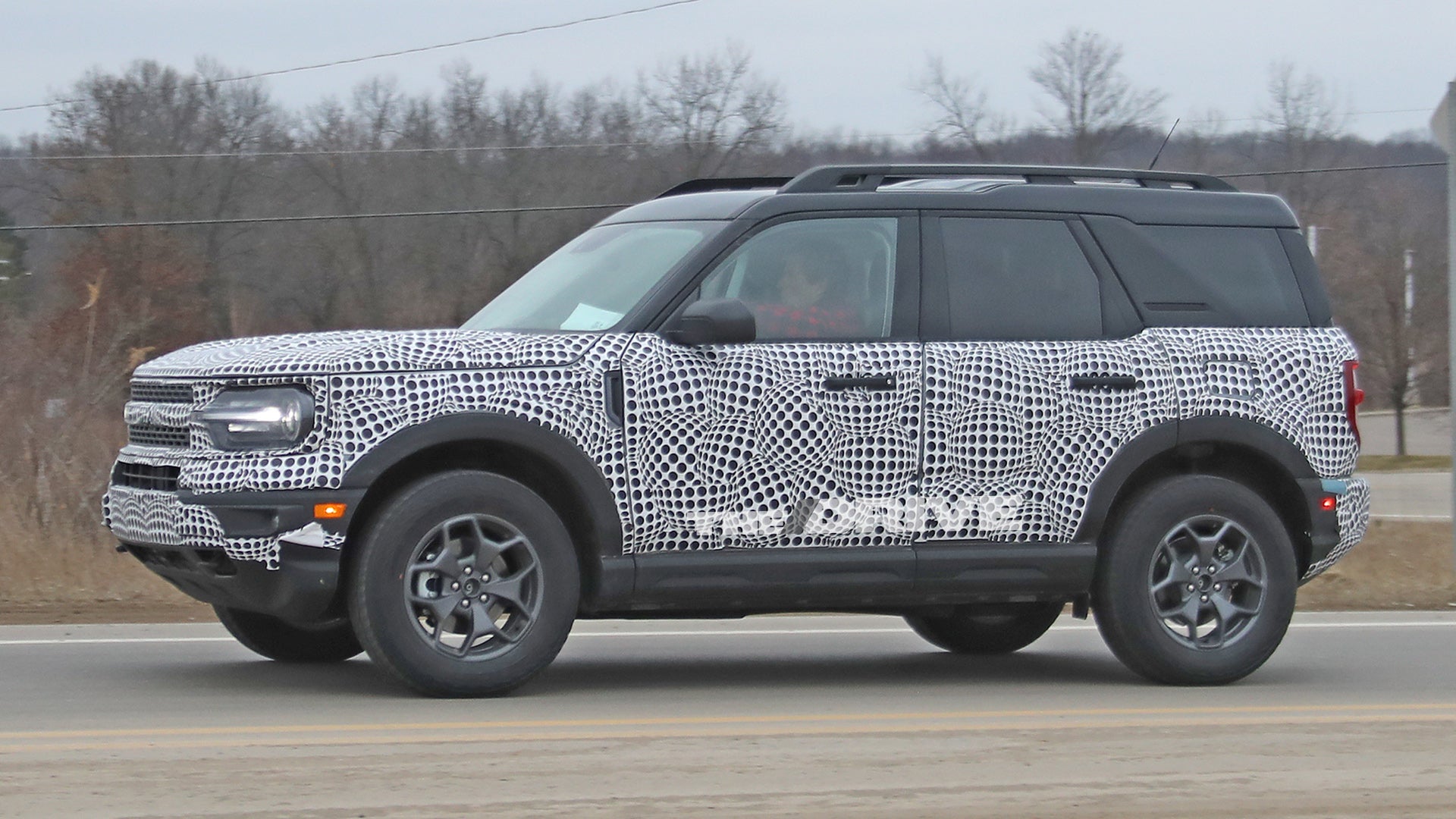 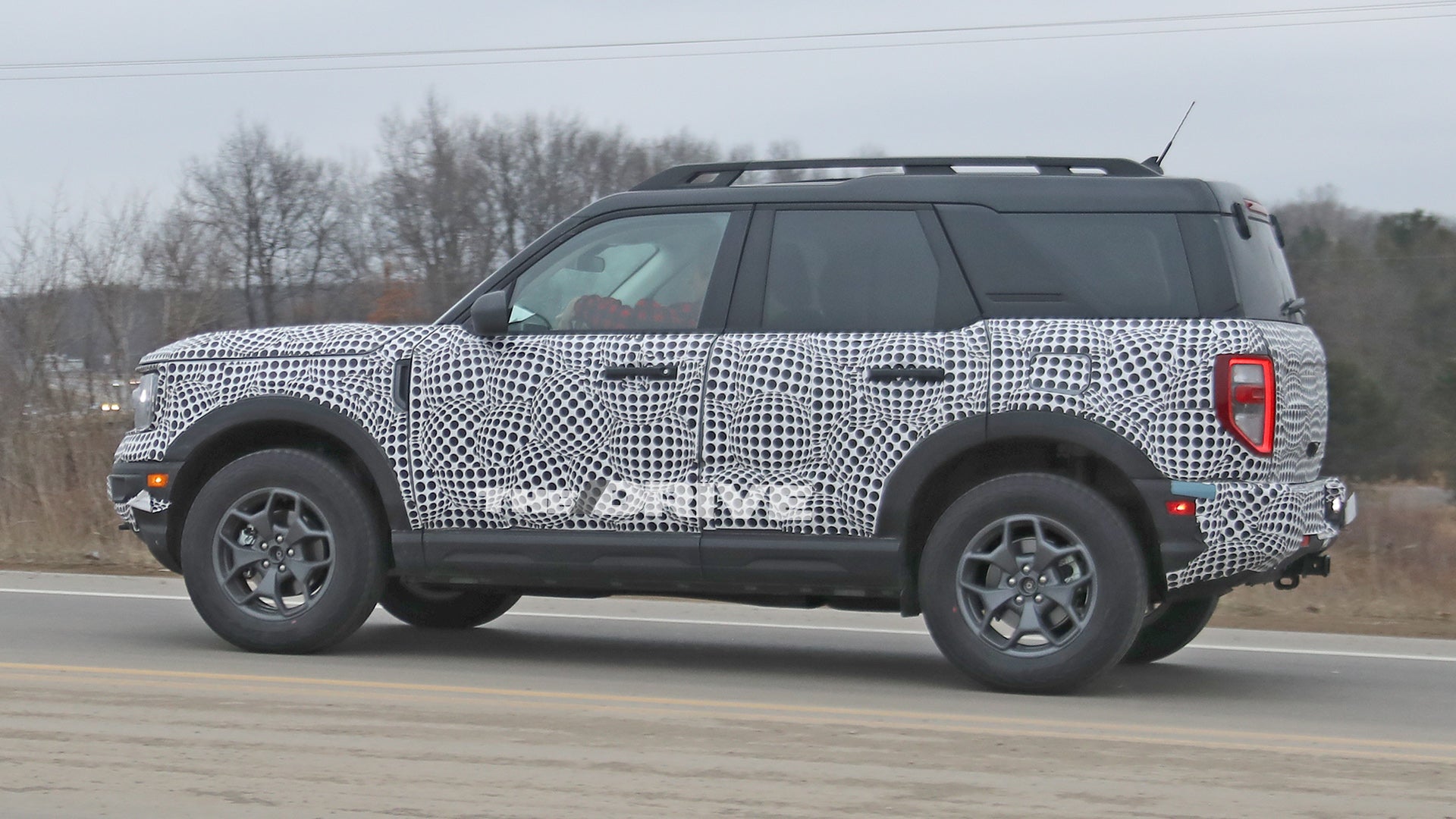 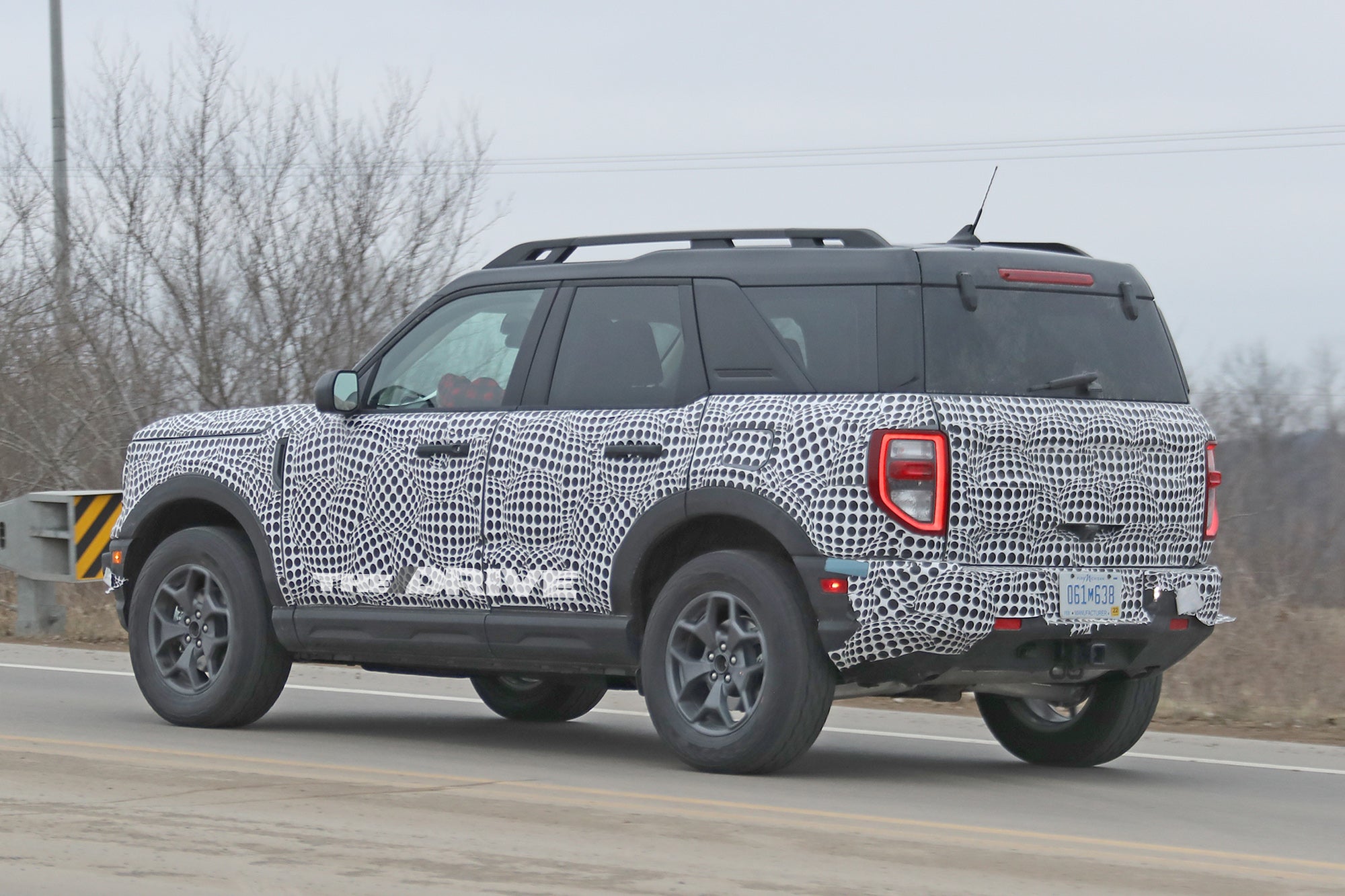 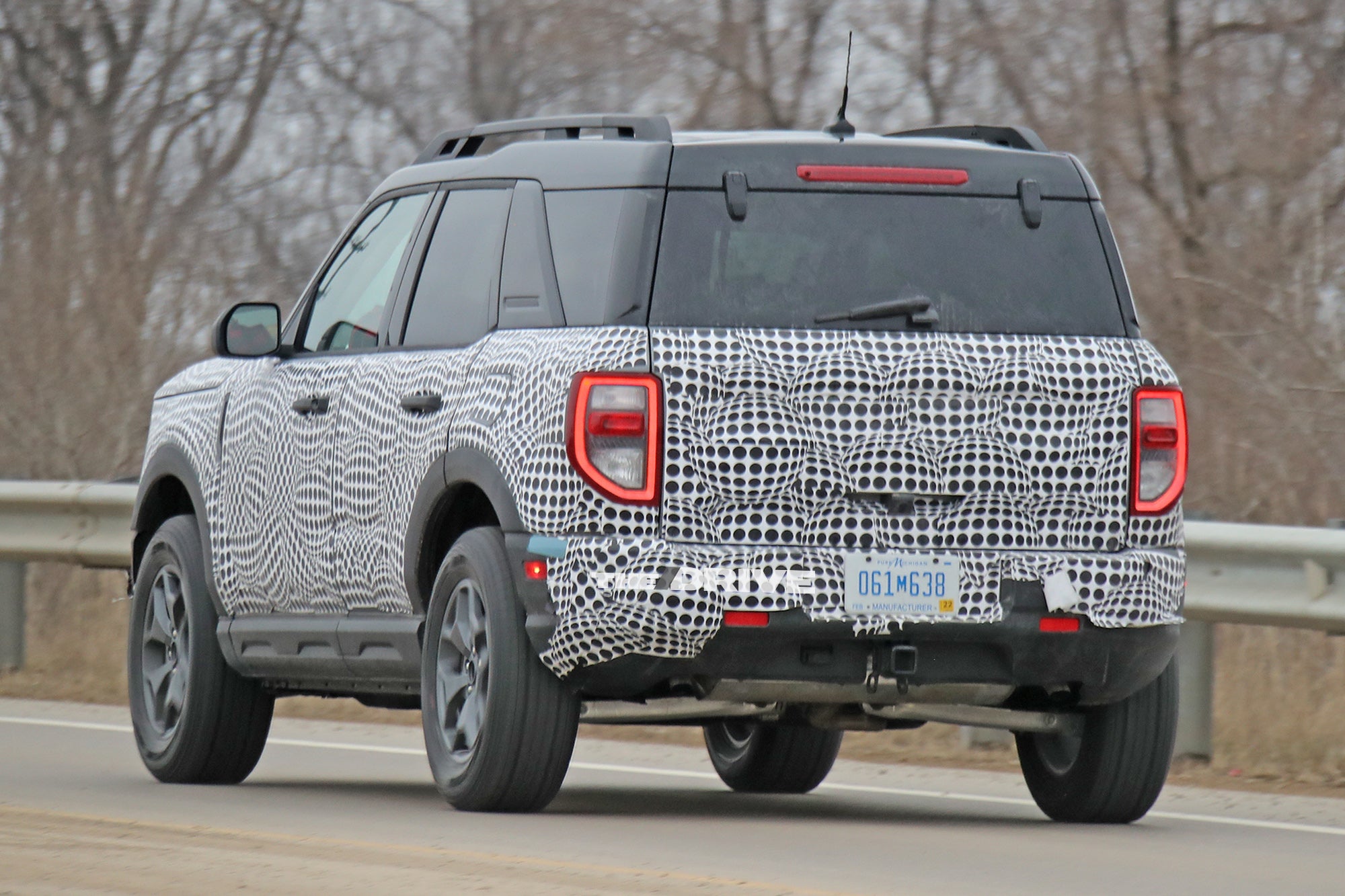 There's not much to speak of at the rear, though you can spy a dual-exit exhaust that wasn't visible in past leaks. The hinged rear glass is a bonus for quick cargo access, though don't look for a true split tailgate as the hatch assembly looks to only be fastened at the top. Lastly, if another recent leak is to be believed, the Bronco Sport will feature 1.5- and 2.0-liter EcoBoost engines making 187 and 250 horsepower. The former is expected to be the turbocharged "Dragon" three-cylinder that was recently introduced in the Escape.

Though this isn't a leak per se, it's obvious that Ford is getting pretty loose with security surrounding its highly-anticipated Bronco brothers to step out with a mostly-undisguised mule like this. So even though we don't know when exactly the Bronco Sport will be formally revealed given everything that's going on in the world, it's safe to say we'll see it before then.