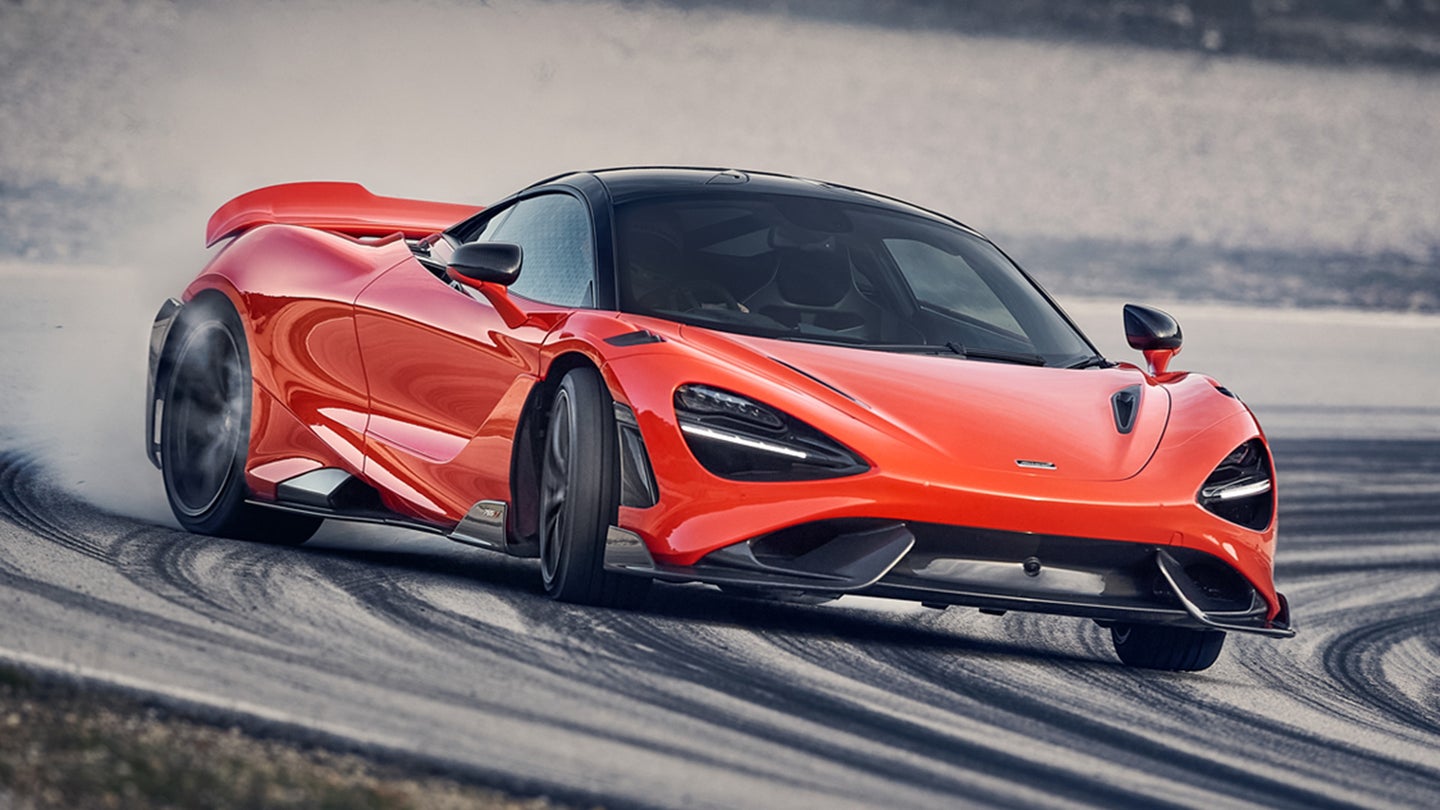 The last thing you'll hear from anyone who has driven McLaren's mind-bending 720S hypercar is that it really just needs to be faster. Yet McLaren did exactly that and gave its range-topping supercar its signature Longtail treatment to create the new 765LT: A lighter, tighter, and mightier McLaren.

The 765LT earns its Longtail designation by being a scant 2.2 inches longer than a 720S, most of which, ironically, is up front. There, an optional carbon fiber aero pack can turn the 765LT's lengthened, lowered bumper and splitter to carbon along with the fenders, which do their best to hide a front track widened by just under a quarter inch. Underneath them sit track-ready Pirelli P Zero Trofeo R tires, wrapped on forged wheels that alone contribute 48.5 pounds of weight reduction. It's a pretty stunning package overall.

These encircle brake calipers borrowed from the McLaren Senna, which can—optionally—clamp down on carbon-ceramic rotors also sourced from the Senna, using pads with LT-specific, track-friendly compound.

Moving to the uncarpeted interior, McLaren foregoes another few pounds by deleting the sound system and air conditioning. These can be reinstalled as no-cost options, and the latter should if you can afford to save weight elsewhere with the MSO Clubsport pack, which includes the aforementioned brake upgrades plus Senna-spec carbon fiber seats that slash almost 40 more pounds.

Those as crazed with carbon as McLaren—even the license plate frame is made of the stuff—needn't stop here either, as that optional aero pack is also good for a carbon underfloor, side skirts, rear bumper, rear diffuser, and active Longtail rear wing, which together raise downforce by 25 percent.

To overcome extra aerodynamic drag, McLaren upgraded its 4.0-liter, twin-turbo M840T V8 with a quad-exit, titanium exhaust to produce 755 horsepower and 590 pound-feet of torque. Combined with a lightened, re-geared seven-speed transmission and a minimum curb weight of 2,963 pounds, this V8 can propel the 765LT from a standstill to 60 mph in 2.7 seconds, and onward to 124 in another 4.5. In theory, the 765LT can run a standing quarter mile in under 10 seconds, and on a long enough airstrip, it'll top out at 205 mph.

McLaren plans to make exactly 765 of the 765LT, some of which will hopefully be built in the model-exclusive point colors Nardo Orange and Smoked White. But something tells us 765LT buyers are a lot like Bentley Mulliner Bacalar buyers, and will want their cars painted to sample—hopefully, the papaya-colored McLaren MCL35 will serve as said sample.