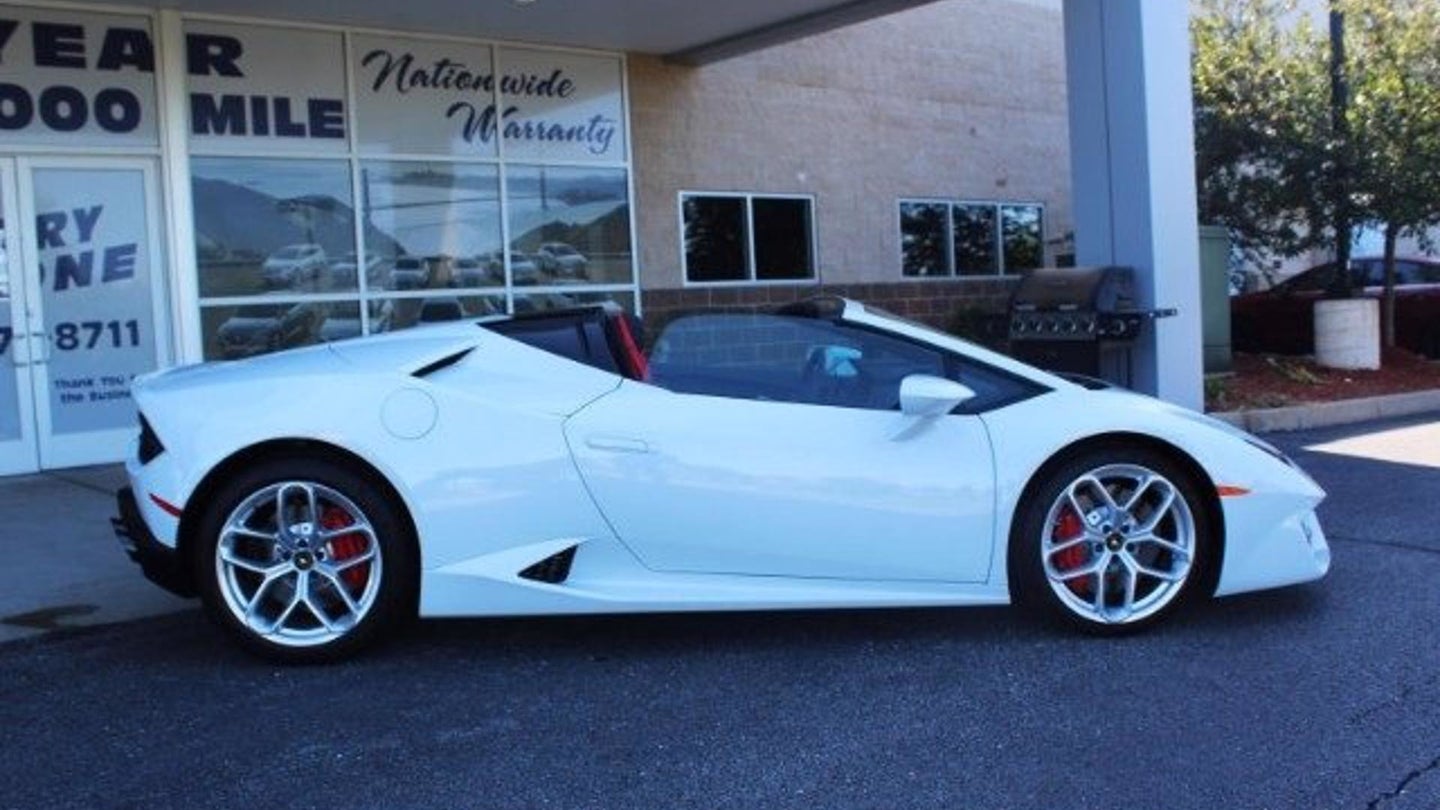 Whenever one scrawls through the depths of the internet, one inevitably finds the interesting, the ridiculous, and the “Dear Lord, what did I just read?” This 2019 Lamborghini Huracan Spyder LP580-2, located in Wentzville, Missouri at a local Hyundai dealership, definitely falls within those parameters.

Finished in Bianco Icarus Metallic, the 2019 Lamborghini Huracan Spyder LP580-2 has only 531 miles on the odometer since it left the Sant’Agata, Bolognese factory in Italy. Suffice it to say, the interests of The Drive editors were piqued, especially after that gorgeous 1992 Supra Turbo we found the other day.

We had a plethora of questions. How, why, where did this Lamborghini come from? Why was it being offered for sale after so few miles? Was it a lemon? A bad financial decision for the previous owner? Were they running from the law and needed money quick? How did a nearly $300,000 supercar end up in a town of 39,000 people? What was this supercar’s story? The reality, however, was slightly less Jason Bourne and more the day-to-day operations of Sterling Cooper from Mad Men.

We reached out to Hyundai of Wentzville for the scoop. Speaking with Blake Meyers, one of the dealership’s sales specialists, the Lamborghini Huracan Spyder LP580-2 was purchased new by the dealership’s owner, Raj Clement. According to Meyers, “Clement bought it, now’s he’s selling it, not much to the story.” Meyers did say that when Clement did decide to sell the supercar, that putting it on the showroom floor and advertising it would be a great way to also drum up business for the small Missourian dealership.

And, to be honest, it worked as we’re covering it right now.

As for the supercar itself, the Lamborghini Huracan Spyder LP580-2 is really how every Lamborghini should come; i.e. rear-wheel drive, no roof, and in a flamboyant color. It’s the quintessential Lamborghini design and all other Lamborghinis that follow a different path are less for it.

Speaking from personal experience behind the wheel of one of these lovely Skittles-colored supercars, nothing can touch the enjoyment—at least not with your clothes on—of this supercar. In a world of all-wheel drive and electronic nannies galore, this is still super.

As for Hyundai of Wentzville’s newest resident, the car comes with an asking price of $226,717, which when financed, comes out to be $2,748 a month for 72 months with a $45,343 downpayment at an interest rate of 2.9-percent. Not exactly a deal, but based on the pictures and wording on the dealership’s website, you may be able to work in a 30-year, 30,000-mile warranty! Might offset the eye-watering asking price and the need to travel to Missouri to get the car.