Porsche Will Now Custom Wrap Your New 911, Boxster, Cayman Directly From the Factory

Most liveries will set you back around $4,500, but if you opt for the famous Martini Racing design be prepared to shell out over $6,000. 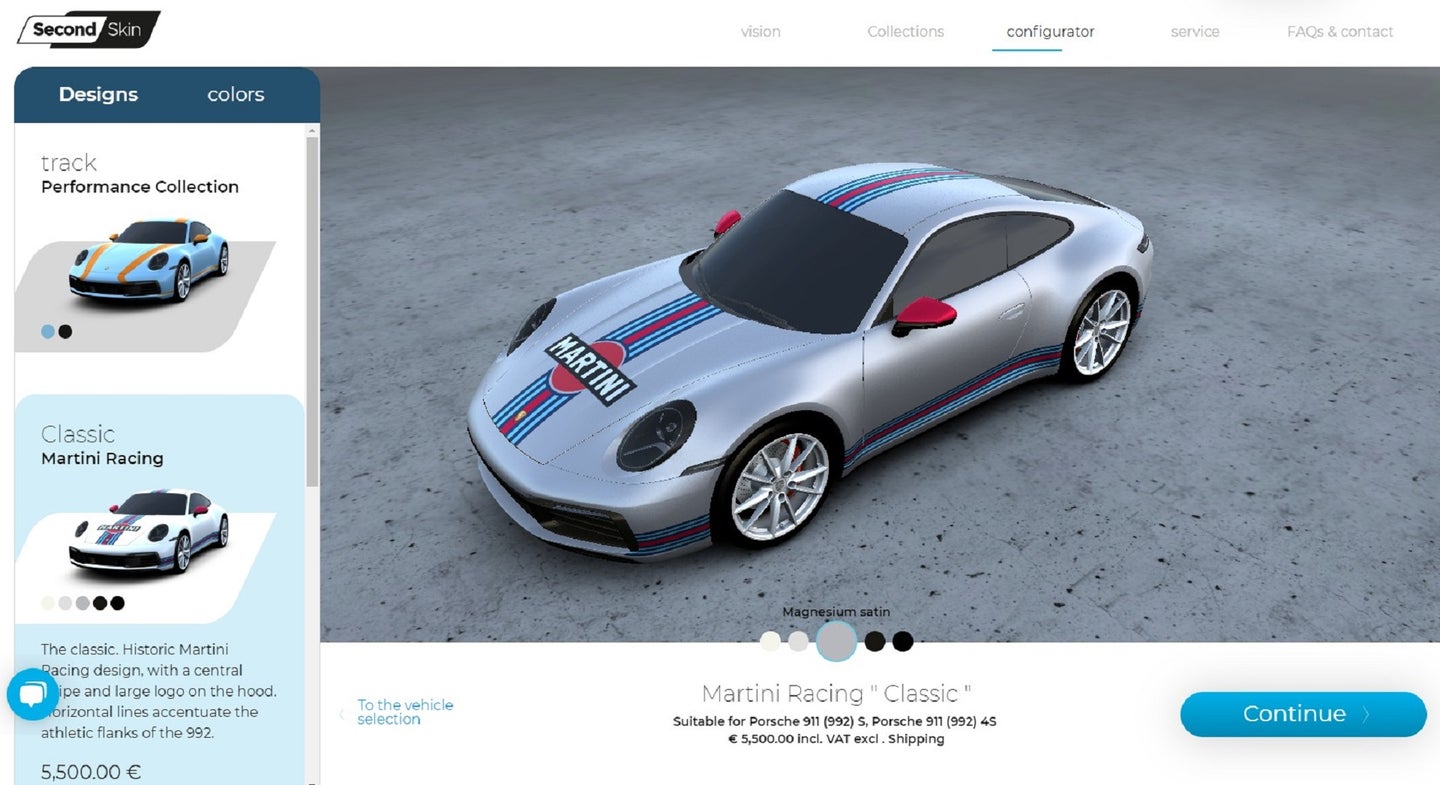 Porsche is launching a new program called Second Skin. And no, despite the funky name, it isn't a line of 911-branded male contraceptives. What it is, is a service that allows Porsche customers to skip the third-party wrap shops and get their speedy creations wrapped from the factory just the way they want them.

Kicking off in July, Second Skin lets customers picking up a new Porsche in the company's home country of Germany—have their cars custom wrapped before it's delivered—a service that has typically been handled after delivery by the aftermarket industry. Judging from the online configurator, it'll only be available for the 718 Cayman and Boxster as well as both 992 and 991.2 versions of the 911 at launch, but all other Porsche models will allegedly be added at a later time.

Vinyl wraps have quickly become one of the most popular modifications in the luxury car world and it's not hard to see why. Vinyl lets your car change its look completely without the cost and complication of a repaint, while providing protection for the original factory paint. Hashtag resale value.

Designs currently on offer largely consist of funky, two-tone setups with a small handful of color schemes each. The 911, however, can be outfitted in the brand's iconic Martini Racing livery. Basic wraps will start at the European equivalent of $4,500 (4,000 euros) while the Martini outfit will go for around $6,200 (5,500 euros).

"As the livery segment is a very fragmented market, we have created a central port of call with 'Second Skin' to guarantee quality and offer a comprehensive approach to finding a solution," said Porsche's Simon Weiss.

A Second Skin-wrapped 911 RSR piloted by Project 1 Motorsport will be running at the 24 Hours of Le Mans this weekend. It features a design by Richard Phillips.

Porsche Boxster Bergspyder Is a Roofless, Single-Seater Concept That Never Made it to Production

The Bergspyder would have been a tribute to the featherweight 909, but concerns over the car’s legality led to its cancellation.

Don’t Fall for This Car-Wrapping Scam