Porsche introduces a 414-horsepower, flat-6-powered Cayman and a topless Spyder. We can’t help but stare. 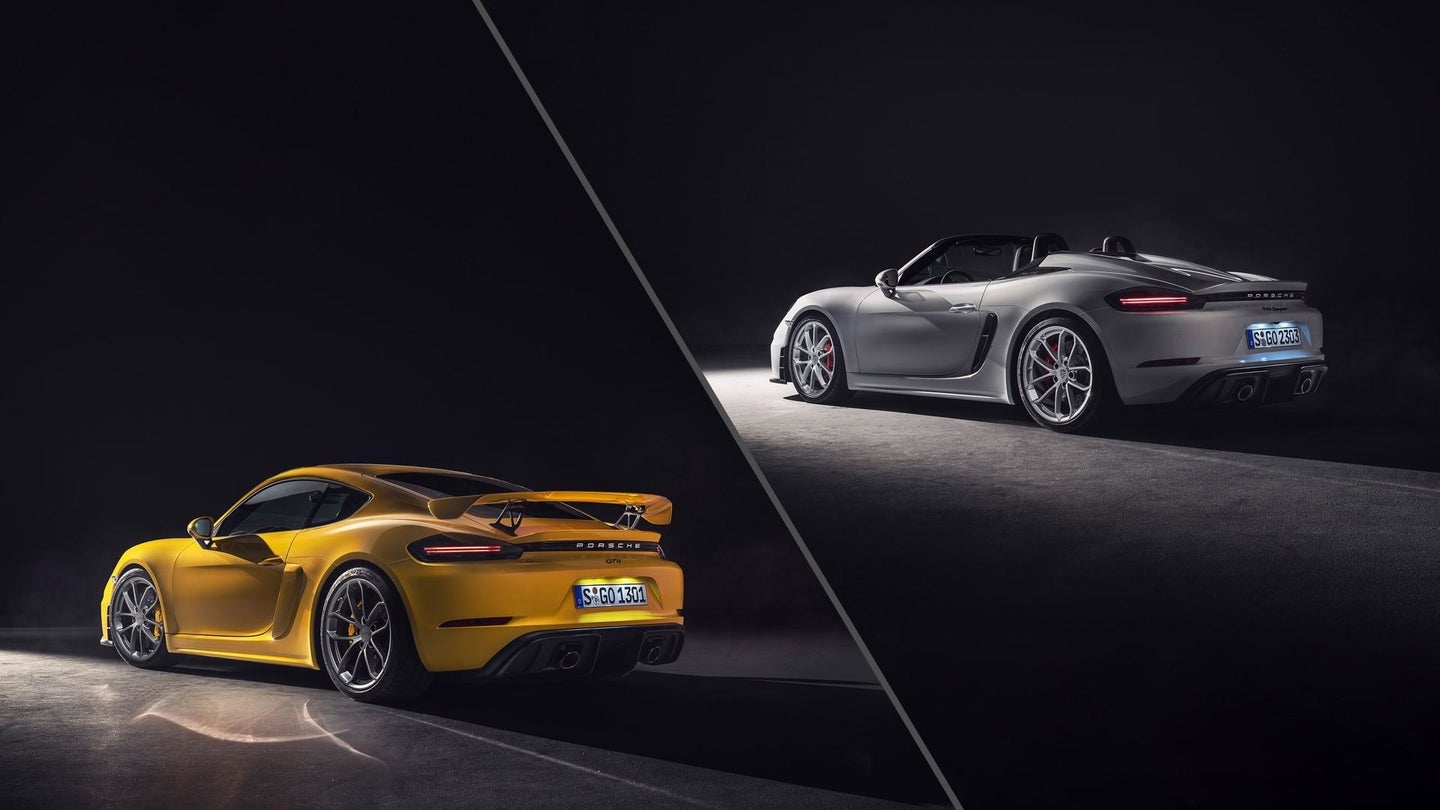 Enthusiasts weren’t happy when Porsche dropped the naturally aspirated flat 6-cylinder engine in the 718 Boxster and 718 Cayman. They lamented that a turbocharged flat 4-cylinder was lodged deep into its engine bay and the way it sounded like a Subaru. Porsche enthusiasts, however, should’ve known that Stuttgart wouldn’t leave them hanging as it's just introduced the all-new Porsche 718 Cayman GT4 and 718 Spyder.

We at The Drive, however, know you’re busy people and have highly important things you need to be doing; i.e. catching up on the latest episode of Chernobyl. That’s why we’ve scoured Porsche’s press release for five of the most spine-tingling details for those in a rush. However, engineering and detail geeks won’t be disappointed, as if you scroll past those five details, you’ll find The Skinny where you can pour over all the gloriously high-revving details of Porsche’s latest and greatest mid-engine sportscars. You’re welcome.

5.) A Clubsport Package Is Available For Die-Hard Racers

Whereas either 718 Cayman GT4 or 718 Spyder have been honed and polished to be the best road-going racers they can be, daily drivability was still the overall goal. For those that don’t care about driving manners or how much they spend at their chiropractor, Porsche offers a Clubsport package for the 718 Cayman GT4, which nets a beefier rear steel roll bar, hand-held fire extinguisher, and a 6-point racing harness for the driver’s seat. Everything a racer would need for their next romp around the Nurburgring. Sadly, the Clubsport package is only available to European customers. Speaking of which...

The previous Porsche Cayman GT4 debuted with by blitzing the Nurburgring Nordschleife in just 7:40. The new 718 Cayman GT4 has lapped the infamous Green Hell 10-plus seconds quicker. Porsche’s keeping the actual time to itself for the time being.

3.) Neither Is What You’d Call A Bargain

2.) Stop on a Dime With Porsche’s Optional Carbon Ceramic Brakes

Both 718 Spyder and 718 Cayman GT4 come standard with steel brake rotors and a set of large aluminum monobloc calipers. However, for those that demand that their car stands up to all manner of track abuse, Porsche’s Ceramic Composite Brakes—carbon ceramic—can be optioned to stop the pint-sized supercar on the proverbial dime.

There’s no need to hype this engine aside from stating that its stroked out engine is derived from the same one as the all-new 2020 911. Rated for 414 horsepower and 310 pound-feet of torque, the naturally aspirated flat 6-cylinder engine is connected to the rear wheels via a 6-speed manual transmission—the sole transmission option. Though Porsche will state that the high-revving—8,000rpm redline—isn’t derived from the 4.0-liter flat 6-cylinder engine as in the 911 GT3, this engine wouldn’t be around if it wasn’t for the very special 911.

Porsche-files have been up in arms over the new 718 Cayman and Boxster since their introduction. Though Porsche began its production of sports cars with four-cylinder engines, the necessary removal of the flat 6-cylinder from the mid-engine sportscar lineup was met with open hostility. It seems this new 718 Spyder and 718 Cayman GT4 are meant to salve the rather rancorous contention.

Both open-top and coupe 718s are already some of the best dynamically adept automobiles Stuttgart make, but to build something better, Porsche’s GT department took over. The sports cars are now centered around a naturally aspirated 4.0-liter flat 6-cylinder engine connected to the rear wheels via a 6-speed manual transmission; the manual is the only available transmission as according to Porsche, it’s pure.

As for the engine itself, Porsche claims that it represents an enhanced version of its new 3.0-liter turbocharged flat 6-cylinder found in the 911’s newest generation. However, we’d be remiss to not say that it’s likely that Porsche used the knowledge from its 911 GT3 which also features a naturally aspirated 4.0-liter flat 6-cylinder engine. The new engine will rev to a spine-tingling 8,000 rpm and delivers 414 horsepower and 310 pound-feet of torque.

Porsche says both will hit 62 mph in just 4.4 seconds, while the top speed for the 718 Spyder is pegged at 187 mph and the 718 Cayman GT4 will hit 188 mph. To help the 718 Spyder achieve that top speed figure, Porsche designed the car with a functional rear diffuser that according to Porsche, is the first Boxster to “generate [real] aerodynamic downforce at the rear axle.”

Elsewhere, Porsche’s GT department ensured that both are the capable track and street cars the rest of the company is known for. In addition to reducing each car’s overall weight, there’s new springs and struts, racing-derived axles, new ball joints, Porsche’s Active Suspension Management dampers which are adjustable and help to lower the cars by 1.1-inches, as well as a retuned Porsche Stability Management system and Porsche Torque Vectoring system that’s connected to the mechanical rear differential.

Stuttgart will also offer customers the option of a Clubsport package that nets drivers a thicker rear steel roll bar, a hand-held fire extinguisher, and a 6-point racing seatbelt for the driver’s seat. Although, Porsche told The Drive that it will only be for European customers. Lame.

As for brakes, Porsche will sell both the 718 Spyder and 718 Cayman GT4 with standard steel rotors and aluminum monobloc calipers. Customers, however, have the option to purchase Porsche’s Ceramic Composite Brakes—carbon ceramic brakes for those who don’t speak Porche. Tires are a newly developed “ultra-high-performance” tire that was designed specifically for Porsche with Michelin. These improvements, at least for the 718 Cayman GT4, mean that its quite a bit faster than the previous generation Cayman GT4. Around Germany’s infamous Nurburgring Nordschleife, the new Porsche 718 Cayman GT4 is supposedly 10-plus seconds faster than the original version. Porsche, though, won’t say exactly how much faster.

Now’s the time for brass tacks. Porsche isn’t about to let these track-rats go for a song and a prayer. No, they’re going to be expensive. According to Porsche, the 718 Spyder will set prospective customers back $97,550, while the 718 Cayman GT4 will cost $100,450. That’s quite a chunk of change for something that starts as the least expensive Porsche. Yet, while we’ll bemoan the eye-popping price, the 718 Spyder and 718 Cayman GT4 with their 4.0-liter hearts will most likely become instant sportscar icons. Once we get behind the wheel, we’ll report back, but we’re fairly certain we’ll be asking “who’s ready to rob a bank?” at the end of our drive.