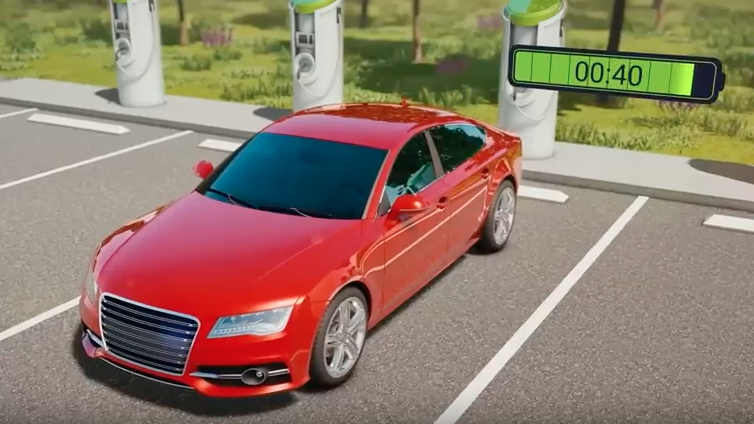 While many of the challenges facing electric cars are progressively being solved by car companies, charging time remains a major obstacle. It’s finally become fairly easy to achieve 200-plus miles of range in an EV, even one with a pricetag that can can dip under $30,000 after incentives (see: Chevy Bolt), but charging time has been a challenge...until now, at least. Israeli firm StoreDot claims to have a solution to the charging time dilemma with their FlashBattery. It’s a unique battery for electric cars that they claim fully charges in just five minutes and can keep a car going for up to 300 miles.

The company has been hyping this apparent breakthrough for a few months; now, StoreDot has finally demonstrated their creation to the public at the CUBE Tech Fair in Berlin.

This battery is significantly different from a traditional lithium-ion battery; according to the company, it uses “proprietary organic compounds” and avoids the use of  graphite. The chemical compound that StoreDot has come up with is not flammable and claims to have a higher temperature of combustion. That means not only does it charge faster than li-ion batteries, but it’s also safer to have in your car.

“Fast Charging is the critical missing link needed to make electric vehicles ubiquitous. The currently available battery technology dictates long charging times which makes the EV form of transportation inadequate for the public at large," StoreDot co-founder and CEO Dr. Doron Myersdorf said. "We’re exploring options with a few strategic partners in the auto space to help us boost the production process in Asia and reach mass production as soon as possible.”

Of course, larger-than-life claims about electric cars have been made before, and history is filled with accounts of people who claimed they could revolutionize the world with new forms of energy storage and generation. But if StoreDot can really get an electric car to charge faster than a cell phone, it could be a huge step forward in the EV revolution.