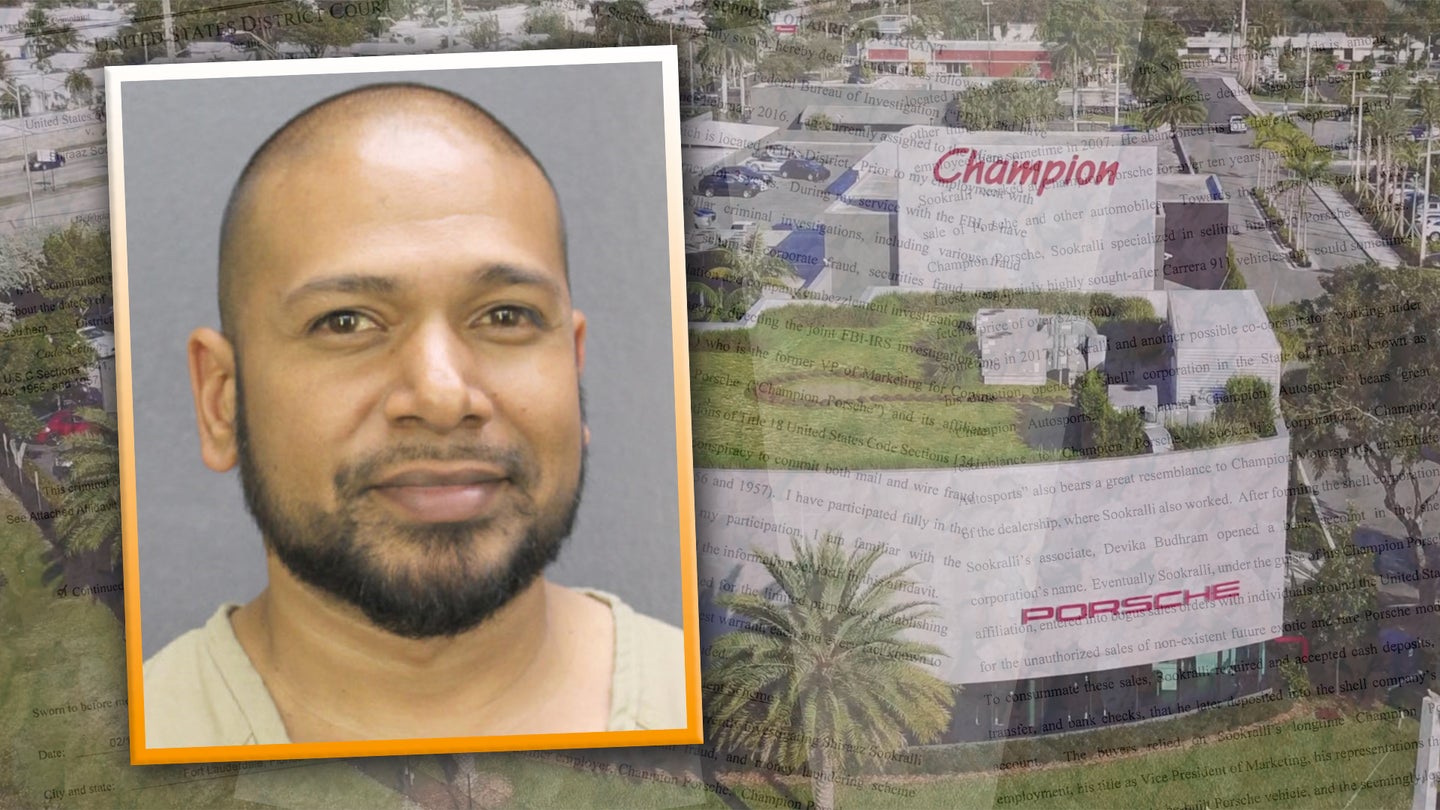 It was early September when Shiraaz Sookralli reached a breaking point. He'd been at it for over a year now, and he could no longer ignore the damage he'd done. In his job as a sales executive at Champion Porsche, a gleaming temple of commerce in south Florida and the largest Porsche dealer in the country, he promised dozens of clients a coveted reservation for one of the company's high-demand 911 GT cars, collecting over $2 million in deposits for the privilege. But it was all a lie, or more accurately, federal fraud. The orders, the updates, the cars themselves—none of it was real.

Except for the money. That was very real, and now it was gone. He was smart about it at first, having buyers wire their deposits to a bank account he set up under the name Champion Autosport—large dealerships often have different registered names—and letting it pile up. But the growing balance proved too great a temptation, and Sookralli soon found himself running up five-figure tabs at Miami-area bars and restaurants and splurging on jewelry and luxury cars. It was a fleeting taste of a different life, worlds away from the one he knew when he was evicted from a small, drab condo in Sunrise back in 2003.

He did it for his kids, right? Ten of them, to be exact. Or maybe it was the $175,000 hole he'd dug himself in credit card debt. He couldn't remember, really. All he knew was that more and more of his buyers were calling the dealership to wonder why their cars were taking so long, or why they could never get their tracking numbers to work with Porsche's online system. He couldn't catch them all; it wouldn't take long for someone to put it all together. Out of money, he'd soon be out of excuses. There was but one thing to do: Run.

Arrest of a Salesman

On Tuesday, Shiraaz Sookralli was finally arrested in southern Florida by U.S. marshals, more than six months after he disappeared as his scam was unraveled by Champion Porsche and revealed to the public in a lawsuit filed by the dealership. His apprehension is the result of a months-long, joint FBI-IRS investigation, and federal prosecutors are ringing him up on charges of wire fraud, mail fraud, and money laundering related to the largest financial crime in Porsche Cars North America's history.

The Drive was the first outlet to report on the story last September before it became international news—and now we've obtained the FBI's criminal complaint against Sookralli that sheds even more light on his alleged acts. Though Sookralli won't be formally arraigned until April 16, the complaint offers numerous details that weren't included the civil lawsuit filed by Champion Porsche. From a stronger timeline to his efforts to cover his tracks to more damning hints about a lack of supervision at the dealership, it's by far the most complete look at his devastatingly simple crime. For the victims, who just wanted to buy a car, it's also likely the most frustrating.

According to the Miami Herald, Sookralli plans to plead not guilty to all charges.

Shiraaz Sookralli joined the sales team at Champion Porsche back in 2007. Evidently he was pretty good at it, hanging on through the recession as the industry took a bath and rising through the ranks to become vice president of marketing by 2017. In his last years on the job, his main task was to handle clients looking to snag a reservation for a limited-production Porsche 911 GT. The sublime 911 GT2 RS, GT3, and GT3 RS are all objects of mind-altering desire and demand, and buyers in that space are all too happy to plunk down $20 or $30 grand over a year in advance for a guaranteed spot in line. It was like shooting fish in a barrel.

That's not to insult the intelligence of any of these buyers. Really, who would expect something like this? Dealerships are bastions of scummy salesmen, especially around a $200,000 car, and so it made sense for many to seek out someone like Sookralli, a well-known figure at the highest-volume Porsche shop in the United States. A business doesn't reach that level by scamming people. You might pay a little more, but you just want a hassle-free experience. Sookralli was happy to get buyers around the country set up over the phone, converting more than one cold call into a sale.

Well, a "sale." According to the FBI complaint, written by the aptly-named Special Agent Austin Steelman, Sookralli established a shell corporation called Champion Autosport sometime in July 2017, playing off both the dealership's d.b.a. name and another entity it controls, called Champion Motorsports. From then on, he instructed potential marks who called seeking a GT car slot to wire their deposits to a Bank of America account owned by his shell company and hoped none would be the wiser. He also generated a blizzard of fake paperwork to hide the scheme, including phony buyer deposit agreements, build sheets, and tracking numbers.

"To consummate these sales, Sookralli required and accepted cash deposits, wire transfers, and bank checks, that he later deposited into the shell company's bank account. The buyers relied on Sookralli's longtime Champion Porsche employment, his title as Vice President of Marketing, his representations that they would be receiving a yet-to-be-built vehicle, and the seemingly legitimate bank account for wiring deposits to Sookralli," the complaint reads. "At no time did any representative of Champion Porsche authorize Sookralli to conduct these transactions that resulted in Sookralli embezzling Champion Porsche money."

Who Knew What When?

So the dealership didn't authorize his actions—but the complaint hints that they weren't paying close attention to him, either. There's a whole section that summarizes the various interviews investigators recorded over the last six months, including with a large number of Sookralli's former coworkers and bosses at Champion Porsche. Tellingly, authorities found that Sookralli hadn't been reporting any of his sales to the dealership's sales manager, "as was protocol," yet it seems no one thought to check in on his business.

It's not mentioned in the complaint, but Sookralli was sued by another dealership in 2018 after a transaction involving a different shell company he operated called Rampage Motors and a pair of $350,000 2016 Porsche 911Rs went bad. The complainant in that case, a local operation named M&L Luxury Cars, alleged that Sookralli overcharged them on one car and wouldn't return the deposit on the second when he failed to deliver it. Though the case didn't involve Champion Porsche directly, the dealership is named in the lawsuit, so its leadership had to have known that something was amiss. But the suit prompted no deeper internal investigation into Sookralli or his work at Champion.

Champion Porsche employees also confirmed Sookralli's extravagant lifestyle—again, something that somehow raised no red flags despite the fact that American Express had been garnishing 25 percent of his wages since 2016 over unpaid debts. They weren't the only ones to notice his taste for the finer things, either. The management of multiple clubs and restaurants in Miami "provided a detailed account of Sookralli's unsustainable spending habits transpiring from the start of the fraud until his actions were revealed in various online forums and media reporting."

Financial records added further proof. Sookralli allegedly used his other bank accounts as well as accounts owned by family members to launder some of the money and use it to buy "luxury vehicles and jewelry." By late summer last year, he'd taken over $2.2 million from 30 individuals—and "quickly and systematically" spent nearly all of it.

The Long Aftermath for Champion Porsche

The complaint describes his disappearance in dispassionate terms, noting that "...in approximately September 2018, at approximately the same time when clients began calling the dealership to inquire about their Porsche vehicles purportedly purchased through Sookralli, Sookralli abandoned his office at Champion Porsche and was nowhere to be found. Sookralli never came back to work."

We can't know exactly what was going through his head as he looked around his office on that final day. What the complaint does note is that he made one last-ditch effort to cover his tracks, removing his work computer and replacing it "with an older model computer not assigned to him."

The fallout was immediate. Champion Porsche management began peeling back layer after layer of alleged fraud, revealing the breathtaking scale. On Monday September 10, a lawyer for Champion Porsche managed to get Sookralli on the phone and ask him point blank if he had stolen "hundreds of thousands of dollars" from buyers. His response? "More like millions." He was also oddly cooperative, agreeing to send over a list of his victims in that same conversation. But that's where the trail ended.

FBI agents finally obtained permission to search his locked office in early October, at which point they discovered the old computer and more receipts from his spending sprees. The investigation wound on as both Champion Porsche and Porsche Cars North America weathered the storm of bad press and angry enthusiasts who saw the case as a potent example of how letting dealers run amok with limited-production, high-value cars is a recipe for disaster. Months later, all the affected owners have been made whole one way or another, Champion Porsche attorney Roy Diaz told the Orlando Sun-Sentinel this week, though the bad taste still lingers for many.

The big unanswered question is where exactly Sookralli has been hiding since September. There was immediate speculation that he had fled the country, since $2 million can get you past the reach of an extradition treaty. But it seems Sookralli never left south Florida—after all, the money was gone. The complaint was submitted on February 14 and immediately sealed because making it public "may cause suspect to flee in order to avoid apprehension, may cause the destruction of physical evidence, and may cause the further dissipation of victim car purchaser's funds." It's somewhat boilerplate language, but a hint nonetheless.

Sookralli remains in custody, and his next court appearance will take place on Friday during his bond hearing. His attorney Howard Schumacher told the Sun-Sentinel that his client hopes to be free by the weekend.

"We’re hoping to get him out on bond," Schumacher said. "He’s a U.S. citizen with 10 children. His parents live here."