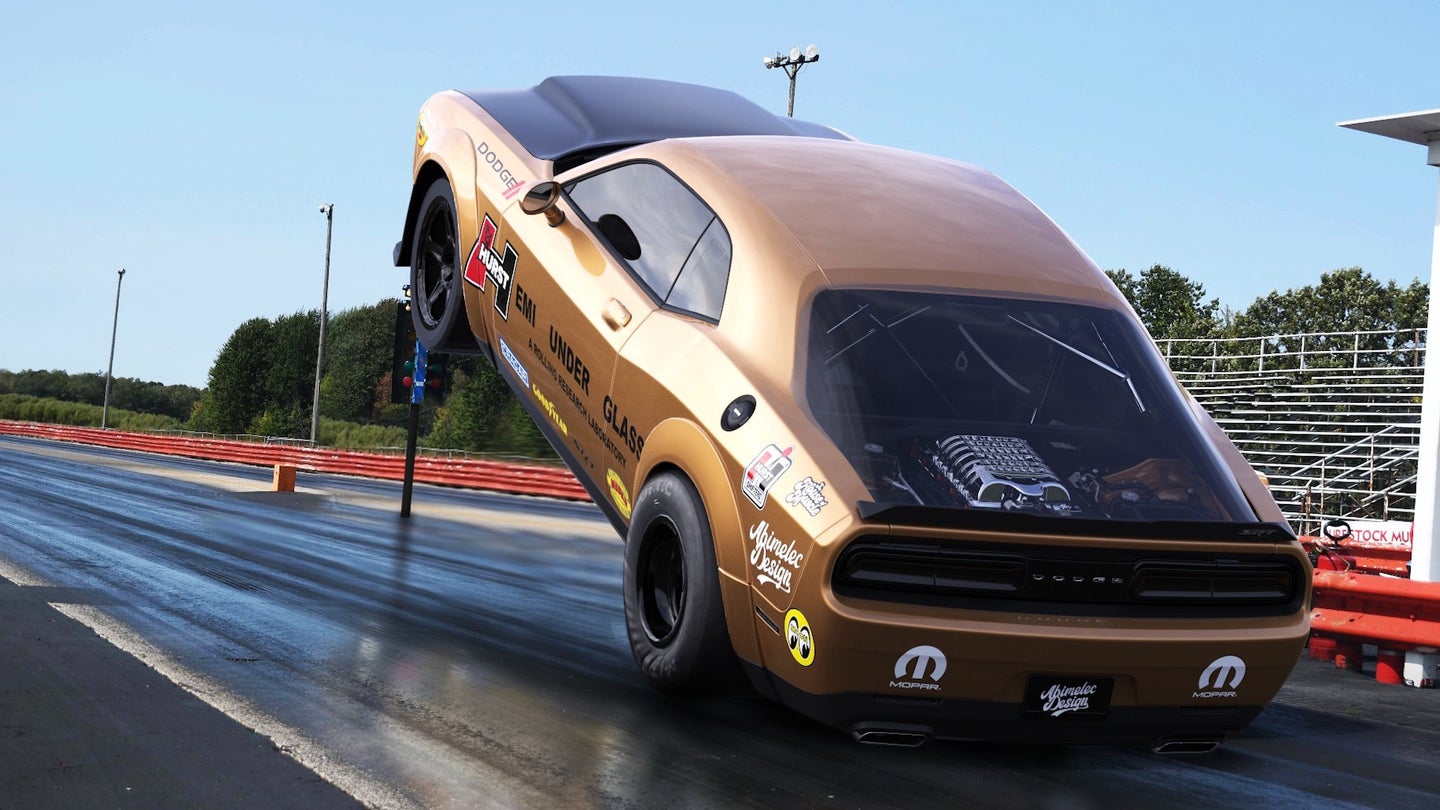 Many folks would argue that muscle cars and American hot rods climaxed in the late '60s and early '70s—you know, the Dodge Charger, Pontiac GTO, Chevrolet Chevelle, and of course, the Plymouth Barracuda. However, modern offerings from the same powerhouses (minus Plymouth) are equally, or maybe even more awe-inspiring than its predecessors, especially given the outrageous horsepower figures produced by modern engines. But has a little bit of flair and over-the-top showmanship been lost in translation?

Behold this in-your-face rendering by Abimelec Design: a Dodge Demon-powered Challenger Hellcat dressed to resemble the old-school Hurst Hemi Under Glass 'Cuda. The original exhibition drag race cars were built by Hurst Performance around the mid-'60s and mid-'70s, and featured Chrysler-derived 7.0-liter Hemi V8s placed strategically over the rear axle and under the large rear window the Barracudas were known for. Hence, the Hemi Under Glass 'Cuda. Clever, no?

While these show cars didn't break any records, per se, they were all about the show, wowing crowds with insane wheelies aided primarily by the odd engine placement—especially for a drag racing car. For that same reason, Abimelec Arellano of Abimelec Design decided to pay homage to perhaps the ultimate American show car.

"One of my favorite modified cars of all time is the Hurst “HEMI Under Glass” Plymouth Barracuda, Arellano told The Drive." "It's a car built exclusively for showing off, making noise and amaze the crowds. In my opinion, cars don’t get much cooler than that."

"It's been a while since the original Hurst ‘Cuda so I thought I would bring it back to life, with a Demon engine and Challenger body," he added. "Originally I was just going to replace the rear seats with an engine, but then you wouldn’t be able to see the chromed supercharger, wouldn’t you? And remember, its all about the show!"

While we've seen plenty of crazy Hellcat and even Demon conversions in recent times, including one made entirely out of carbon fiber and twin-turbocharged, we've yet to see a V8 Demon crate engine installed in the rear of a vehicle. Just thinking of 840 horsepower driving the rear wheels directly with minimal energy loss gets our juices flowing.

"I think the car culture in general needs a bit more of this kind of stuff," said Arellano. "Nowadays everything seems to be so centric on who’s got more horsepower or who’s got the fastest quarter-mile, which is amazing, don’t get me wrong, but I think we all enjoy a good show like the old wheel-standers used to put on."