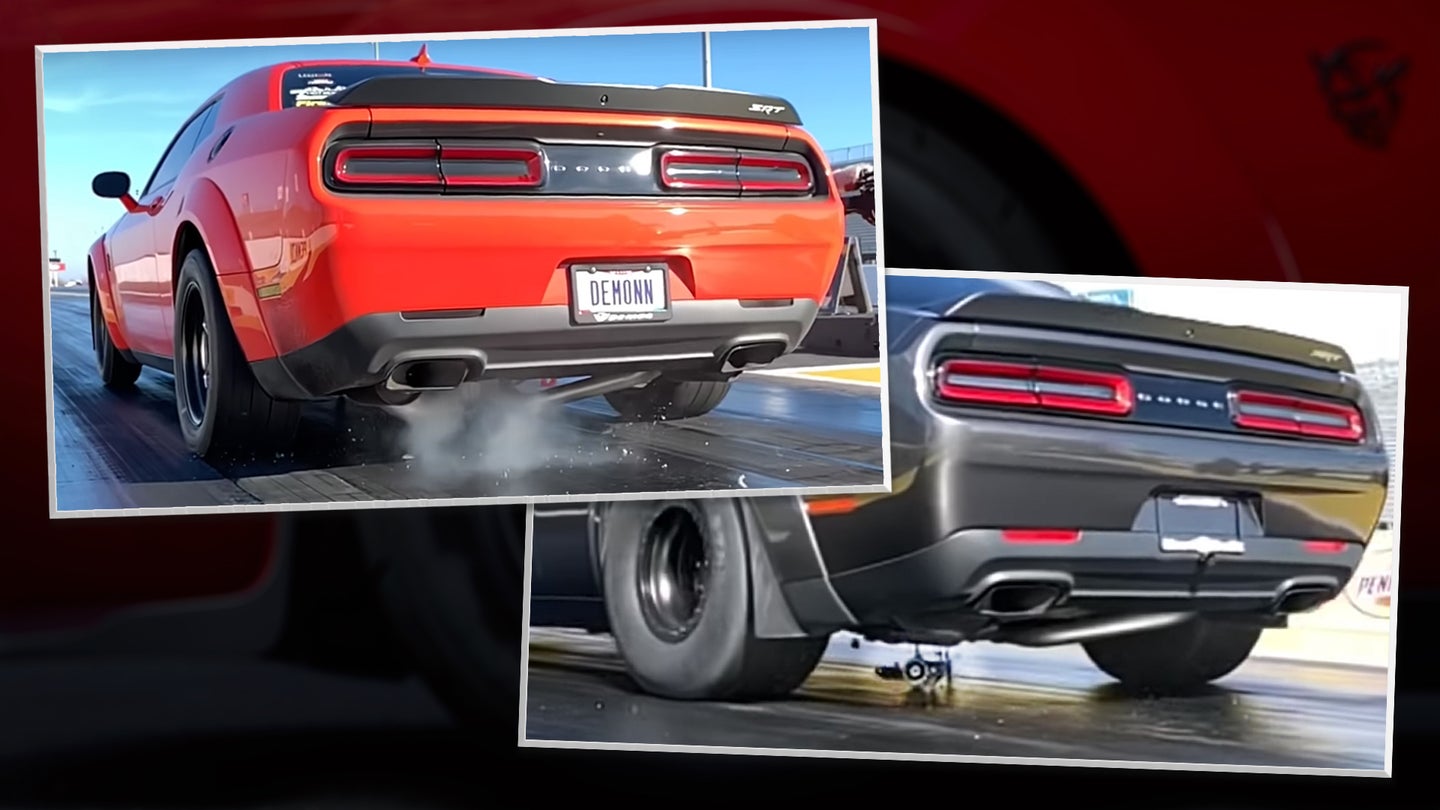 The 840-horsepower 2018 Dodge Challenger SRT Demon is the closest thing to a production drag racer that's ever been built—which is why a slow-motion video showing the rear axle exploding on two different Demons during an event in Texas last month has raised concern among owners and prompted an internal investigation at Dodge.

But there's more to the story than a simple failed part, involving both the development of the Demon and the science of drag strip preparation. The Drive talked to Dodge, the car club that organized the event, and the company that handled the surface prep at Houston Raceway Park to get the full picture.

A few weeks ago, the drag strip hosted a private hoedown for members of the Legions of Demons car club, giving owners a chance to bust out those skinny front wheels and go wild in a safe environment. According to the organizers, the ultimate goal was to give every car a legitimate shot at NHRA Top Fuel racer Leah Pritchett's stock Dodge Demon quarter-mile record of 9.65 seconds.

Crucially, the event was produced by a drag strip surface prep company called Mass Traction, which also supervised track maintenance for Fiat-Chrysler during the Demon's development and knows how to maximize grip for the car. Forty-two stock Demons showed up for a run at the record, joined by five modified models for the hell of it. The result? Though no one topped Pritchett's mark, 38 of those stock cars made it into the vaunted nines. Unfortunately, the other four suffered catastrophic rear-end failures at launch, as did one of the modded cars.

The video, which The Drive can report has now been seen by Dodge's highest executives, shows the rear axle detonate on both the modified Demon and one of the stock models in brutal slow motion. The first clip in the sequence features the hotted-up Granite car. Just as it rears back and lifts the front wheels, a shudder reverberates through the chassis. The front comes back down onto the track, now joined by the inner assembly of the rear differential, leaving a trail of gears, oil, and metal shards in its wake.

In the second clip, a stock Go Mango Demon struggles briefly with a balky transbrake—you can see it rock back and forth prior to the doomed launch—before suffering a similar fate as it leaves the line. This time, the failure appears concentrated near the front of the differential, possibly with the pinion gear. But the result is the same: A glittering, greasy mess, and a broken car.

The YouTube uploader's conclusion is that Dodge Demons are in dire need of a rear differential brace to better distribute the insane forces generated in launching a 4,200-pound car from 0 to 60 mph in 2.3 seconds. In other words, Dodge built a car that can't reliably handle the job it's designed to do. That seems logical—a 9.5 percent failure rate (4/42) on a basic launch over a single weekend sure doesn't look good.

Dodge declined to issue a statement, though as we mentioned up top, the automaker is formally investigating the matter. The two owners of the cars in question also declined to comment, while Legions of Demons organizer Byron Godbee filled in a few missing details for The Drive.

Godbee said that the modified car was tuned to about 1,000 horsepower at the rear wheels and still utilized the stock differential, bolstered by a hefty brace. So it exceeded the diff's factory torque ratings; that alone doesn't guarantee a failure, but parts do break, as Godbee put it, even those marketed as "race-hardened."

The problems with the stock Dodge Demons are more concerning. Godbee confirmed the owner in the video was staging on the line using the car's transbrake feature, which involves keeping your foot planted on the throttle and holding the vehicle with one of the steering wheel shift paddles. As he was set, the system reportedly went into limp mode briefly before reactivating. Seeing it come back online with the throttle still pinned, he decided it was OK to launch. It was not.

It was our conversation with Mass Traction owner Brandon Mass that shed the most light on the matter. He told us he treated the drag strip surface at Houston Raceway to his company's highest standards for the event, getting as close as possible to the laboratory conditions he created to help max out the Demon during its development. And he also stationed the cameraman in the perfect position to capture the carnage, because in his words, he "knew it was gonna happen."

Mass pointed out that at any racing event, you're going to have at least one or two outliers that suffer some sort of catastrophic failure. It's just the nature of the game. But he also noticed something important as the Dodge Demon underwent testing: Cars that ran full-strength passes on lower-traction surfaces were more likely to break when they returned to perfectly-treated pavement delivering maximum grip.

There are a number of reasons why that could happen. Mass hypothesizes that the wheel and tire shake generated when launching on a less-than-ideal surface is causing microscopic stress fractures in the rear differential. Put that car back on a sticky surface that doesn't allow wheel spin or hop to dissipate any power, and the weakened structure suddenly experiences the full force of the launch.

"Our job is to prep the surface to the maximum that it can be, which exposes the weak points. That's why Dodge brought us in for testing," he said. "The Demon powertrain itself is bulletproof... but we did see if the car saw some prior trauma from a rougher launch, we would see part failures [on our treated surface]."

So, boom goes the diff. Mass thinks it's likely that the broken cars in Houston had previously been used on drag strips with a lower level of preparation, generating those tiny, fatal cracks in the drivetrain that revealed themselves on his ultra-grippy surface. Short of a final answer from Dodge's own investigation, that seems as likely a cause as anything. It certainly makes more sense than random chance or a systemic manufacturing defect on such a crucial part suddenly rearing its head.

And while the Dodge Challenger SRT Demon is surely a mechanical marvel, science can only do so much to contain the pure force pouring forth from that titanic supercharged V8. Dodge itself advises owners to ease out of the warm-up line-lock burnout, because popping off the throttle can cause the softened tires to hook up instantly and snap something in the drivetrain. Other owners of stock models have found that the wrong combination of tires and track prep can also provoke a failure. You can't engineer for everything at this level.

Though if it turns out that every Demon is especially susceptible to low-traction stress, that would be a much bigger problem for Dodge, one that might indeed be remedied by adding a differential brace. It wouldn't cost Fiat-Chrysler too much to whip one up for all 3,300 cars out there. As to other fixes, well, the Demon is already out of production. An easier but possibly more expensive route would be to extend or expand the drivetrain warranty in some way.

So overall, this video doesn't prove that the Dodge Challenger SRT Demon is doomed. But it does show that like any high-performance car, it's only as good as the stage on which it performs—which can enhance its strengths, worsen its weaknesses, or cast a harsh spotlight on the growing gap between the two.