Few sounds make me want to bang on my chest like King Kong while defending his damsel in distress from the bad guys more than a Dodge Hellcat engine being wound up to 6,000 rpm. The rumble of the Hemi V8 and whine of its supercharger produce a sweet melody of power and destruction that is beautiful as it is intimidating—much like my experience at Saturday's fourth annual Road Kill Nights event in Pontiac, Michigan.

Dodge brought out the big guns and put on a huge show for 44,000 folks who congregated at M1 Concourse to see 128 home-built, shop-built, and factory-built muscle cars duel it out on the legendary Woodward Avenue, the birthplace of drag racing. From underdogs to street legends, everyone with a passion for putting the pedal to the metal signed up to get their share of a $30,000 purse distributed across two main classes: big tire and small tire.

“Last year, more than 40,000 enthusiasts celebrated performance car culture at ‘Roadkill Nights Powered by Dodge’ in an epic kick off to a week of cruising events,” said Steve Beahm, head of Dodge SRT, Chrysler, and Fiat. “With drag racing, thrill rides and music, Roadkill Nights gets people on to a track run by professionals, so they can really show how their hot rods perform in a more controlled environment.”

One of the highlights of the day was witnessing reality-TV star and owner of Gas Monkey Garage Richard Rawlings put on a smoke show at the wheel of a new Dodge Challenger Hellcat, right up until the moment when he lost control of the 707-horsepower monster and crashed it against a concrete barrier. The loved-or-hated celebrity was competing against NHRA superstar Leah Pritchett as part of the celebrity showdown that was ultimately won by former WWE wrestler Bill Goldberg.

Seeing a Hellcat-swapped Toyota Prius beat a Dodge Demon at the 1/8-mile drag strip was almost as comical as Rawlings little stunt, but witnessing a Duramax diesel-powered Silverado rocket down Woodward and beat seriously prepped muscle cars was by far one of the coolest things I've ever seen. Well, actually, that honor might go to the flame-throwing trucks, which fired 40-foot-tall flames into the dead of night courtesy of their alcohol-burning contraptions.

In all, the highlight of Roadkill Nights may have been what Dodge refers to as "Thrill Rides," where my son and I got to ride in a Charger Hellcat as a pro driver drifted around a skidpad until his rear tires shredded into tiny little pieces—quite literally. But there was also that moment when Goldberg picked up Dodge and SRT Head of Design Mark Trostle with one arm, put him on his back, and pretended like he was going to body-slam him. And I can't forget about the nitro-fueled dragsters and funny cars that blew people's hats (and eardrums) with their monstrous horsepower. In retrospect, there were too many awesome experiences to crown a single one as the coolest of them all.

Unfortunately, a couple of rain showers forced the action on the drag strip to come to a premature close, so each class winnings were split evenly between the top eight racers. As for me, after enjoying almost 12 hours of racing and racing-related entertainment, I found myself covered in mud, smelling like burnt rubber, and just a bit dizzy from inhaling exhaust fumes. Overall, a mighty fine day. 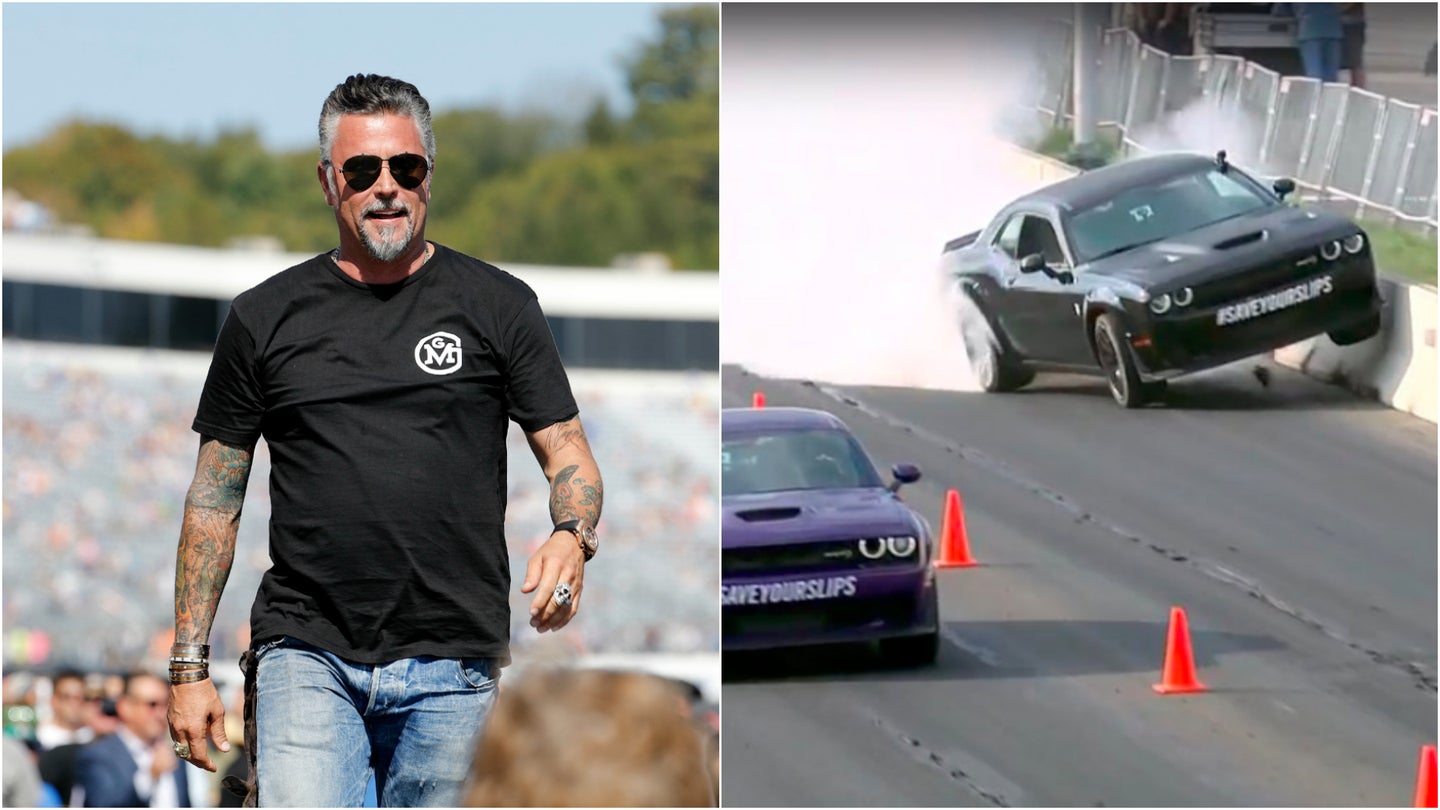 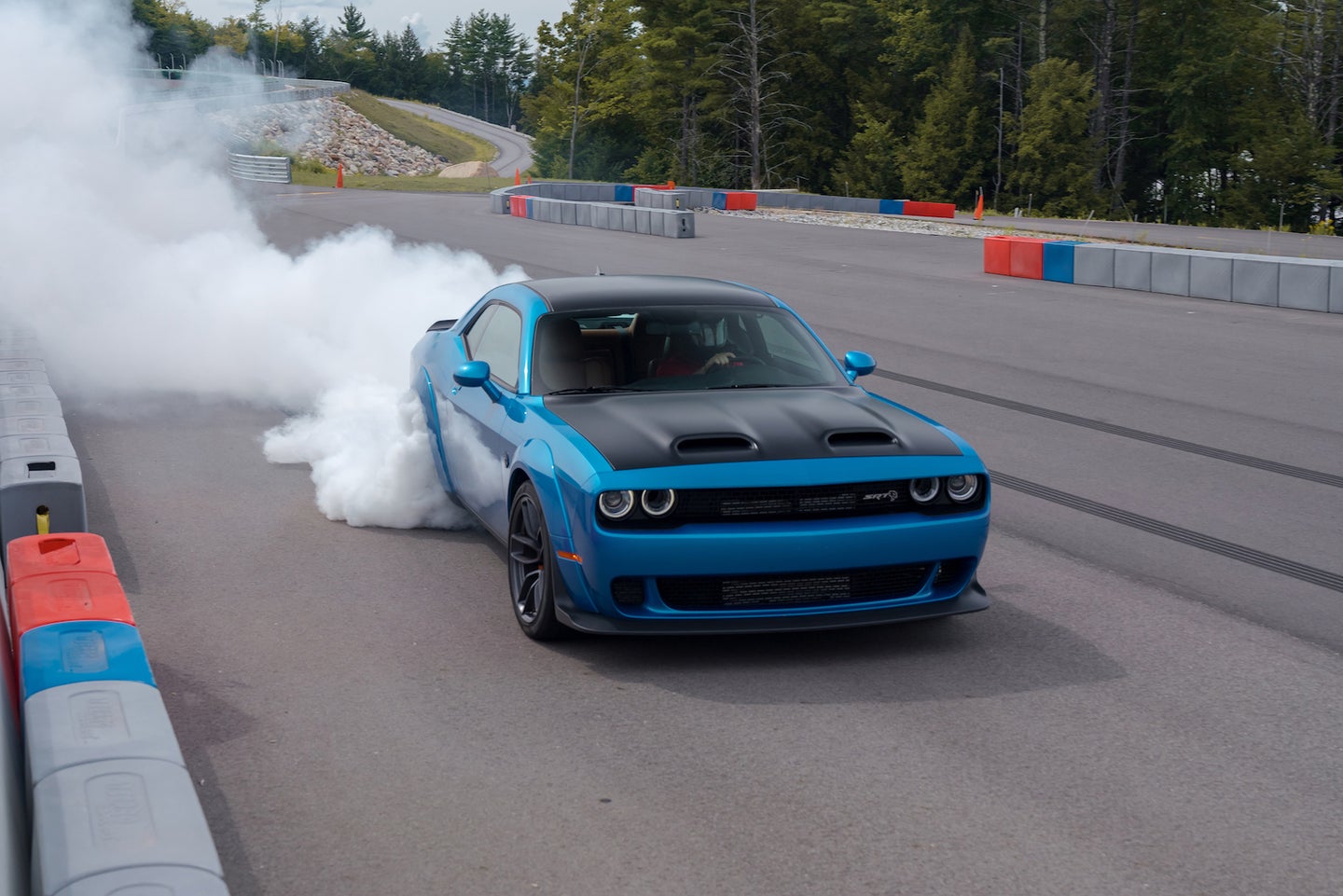 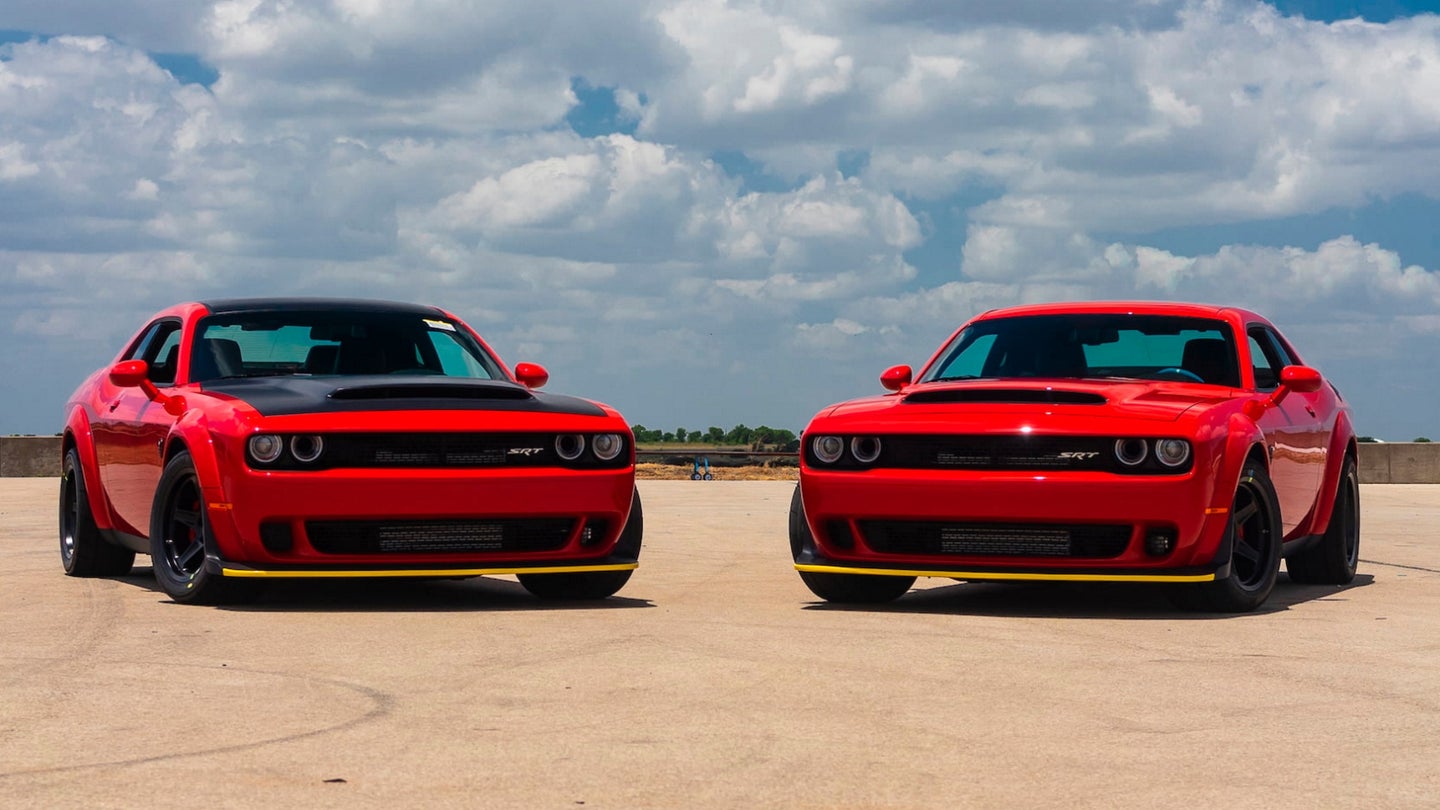 Mecum estimates this devilish pair is worth at least a quarter-million dollars.