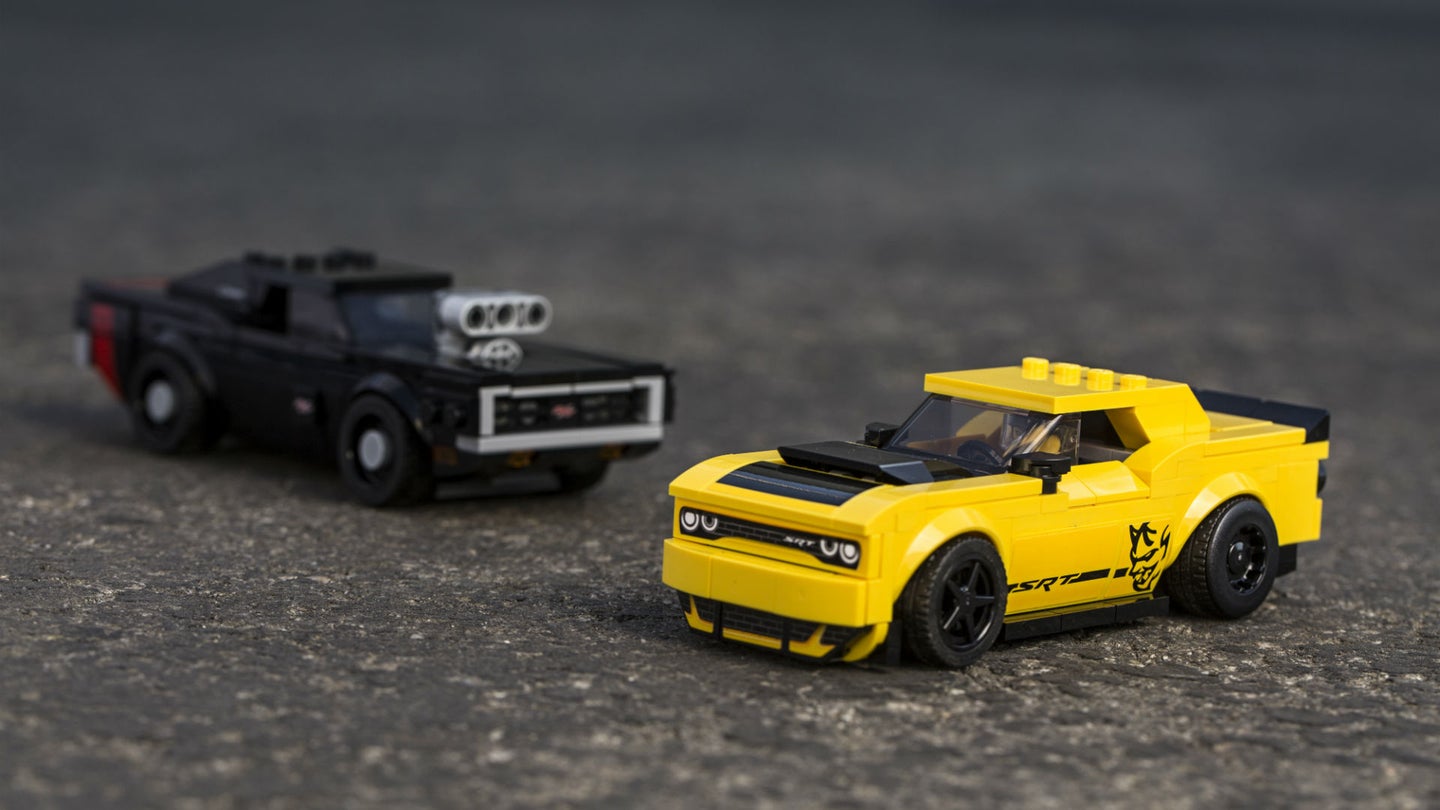 The 840-horsepower Dodge Challenger SRT Demon known for sending every drag strip straight to hell is now available in brick form thanks to the geniuses at Lego. That's right, Dodge recently announced that it has partnered with the famous toy brand for a new Speed Champions set featuring the 2018 Demon and a sweet 1970 Charger R/T.

This nostalgia and adrenaline-packed set is the beginning of Dodge's partnership with the Danish toy brick producer, and a way for young enthusiasts to get a taste of the brand with two of Dodge's most iconic tire-slaying muscle cars, both in classic and contemporary form. The mini Demon comes with two types of wheels and a variety of decorative stickers, and the Charger features a removable supercharger and an additional engine cover. The set also comes with three Lego minifigures, including two drivers and a race marshal. Also worth mentioning, is the fact that one of the minifigures is none other than NHRA champion Leah Pritchett. This is the second fame racing driver Lego features in one of its Speed Champions sets, with Ferrari racing driver Cristina Nielsen being the first.

“We know that many of our Dodge//SRT enthusiasts become fans of the brand at an early age, and like me, also grow up building LEGO vehicles that we dream of one day driving on the road,” said Steve Beahm, Head of Passenger Car Brands, Dodge//SRT, Chrysler and FIAT – FCA North America. “With the new Speed Champions set featuring the 2018 Dodge Challenger SRT Demon and the 1970 Dodge Charger R/T, our youngest fans can now build and jump into the ‘driver’s’ seat of two of their ultimate fantasy muscle cars.”

The set is featured in a 30-second television commercial featuring Pritchett called "Metamorphosis," the first in Dodge's new advertising campaign based on this childhood dream, one most of us are familiar with regardless of what brand we fantasize about. Unfortunately, a buildable Demon Crate isn't included with purchase.

Although the exact number isn't specified, Dodge says that Lego will only make a limited number of its SRT Speed Champions boxes, so grab one while you can from Dodge's website. Be warned though, the $29.95 asking price won't cover repairs for the tiny tire marks left on your coffee table.