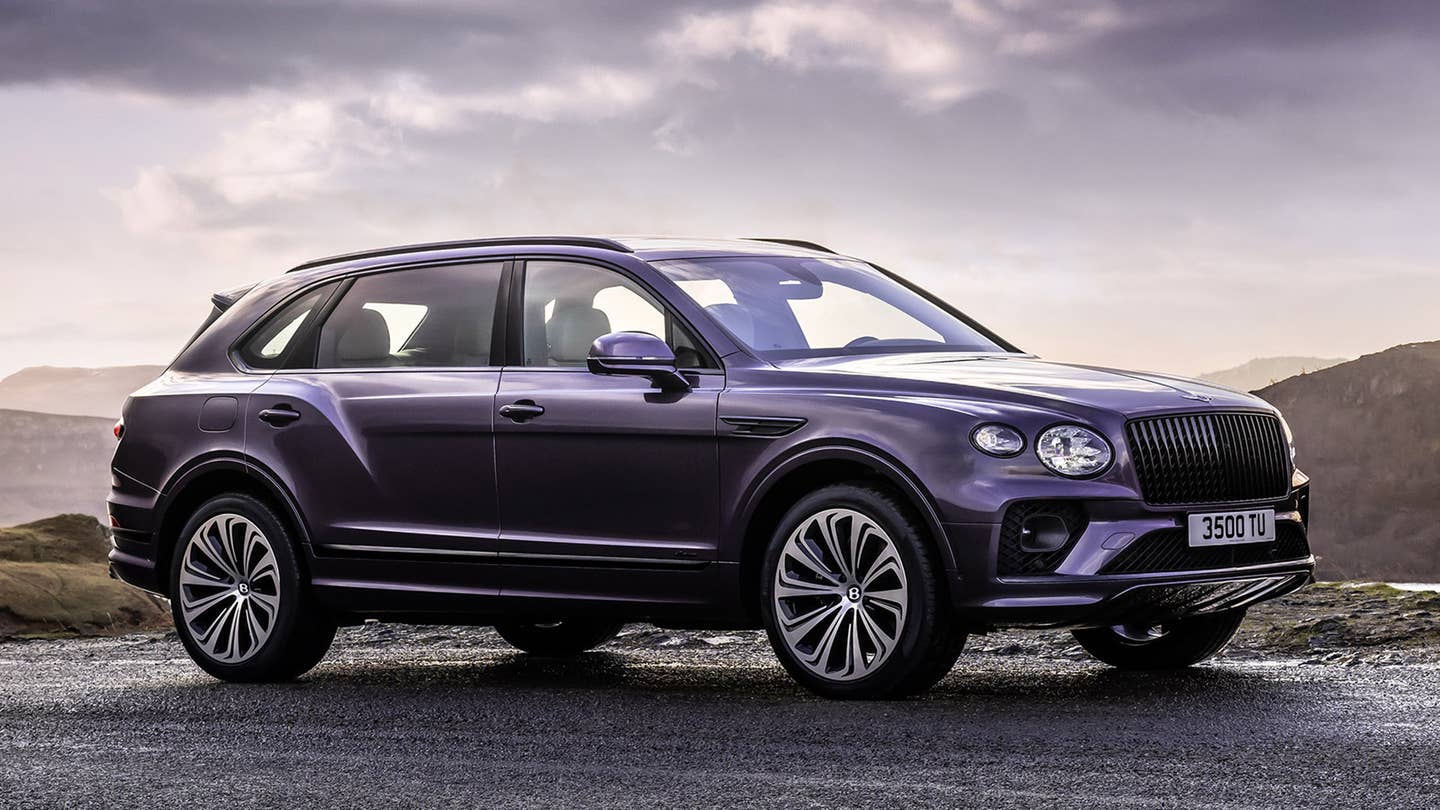 Some news: Bentley is replacing the Mulsanne supermegahyper 6¾-liter V8 limo. Not with anything similar, but rather, with a big SUV: the 2023 Bentley Bentayga Extended Wheelbase—or EWB to its friends at the golf club. The well-heeled of the world will no longer look dictatorial as they’re swept through the mean streets of… whichever town they make money in, but instead a bit like bespoke-suited kids on the way to soccer practice.

The Bentayga EWB may not be exactly what you thought Bentley would replace the Mulsanne with—perhaps you expected far more sinister or monarch (sinister monarch?) vibes—but seeing as SUVs are A Thing, it makes sense for Bentley to add more space on the end of an existing and hugely sensible platform. Specifically, it added seven inches—or 180mm—of more space to the wheelbase and rear cabin.

I went to a preview of the car just outside London and had a proper sniff around. Those extra seven inches have a massive effect on the Bentayga. The rear legroom in the back is truly vast. While I am not a tall man, I could sink into the typically sumptuous Bentley leather, stretch my pins as far as I could, and not really trouble the seat in front. It had, of course, been moved as far forward as it could—after all, when one’s being driven there are no passengers up front. Only a driver. Preferably wearing some sort of cap.

Some Numbers and an Engine

Besides the added length over the SWB version, the Bentayga EWB’s engine hardware remains the same. It’s powered by a 4.0-liter twin-turbo V8 that produces 542 brake horsepower and 568 pound-feet of torque. Bentley claims the SUV does zero to 60 in 4.5 seconds and has a top speed of 180 mph.

Bentley’s launching the EWB with that V8—though Mike Sayer, Head of Bentley Product Communications, isn’t ruling out a different motor. It’s just not the famed Bentley W12 you’re thinking of: “The V8 is the most popular powertrain for the Bentayga family, so it makes sense to launch with it,” he said. “The W12 in Bentayga is now limited to the Bentayga Speed and only in selected markets. We feel that the Speed remains suited to the standard Bentayga only.” Translation: The W12-powered Bentayga Speed likely won’t be extended-wheelbase-fied. However, as Sayer went on, “We are continuing to introduce the standard wheelbase Bentayga Hybrid across all markets, and we are evaluating when an EWB Hybrid could be introduced.”

So while the EWB doesn’t currently get a power bump over the smaller car, it does get rear-wheel steering. This gives it a 38.7-foot turning circle, which is 1.9 feet tighter than the regular Bentayga. Perfect for quick U-turns in Whitehall.

All About That Wheelbase

The Bentayga EWB’s wheelbase grew from 118 inches (2,995mm) on the standard version to 125 inches (3,175mm); its overall length is now 209.5 inches (5,322mm). For reference, the length of an entire Mazda Miata comes to 154.1 inches. How did Bentley put the extra wheelbase length and rear cabin space in there? There’s more interior length than… basically everything, even a Rolls-Royce Cullinan.

“The 180mm stretch is entirely in the rear cabin section of the car,” Sayer elaborated. “So, the extra length demanded new rear doors, a new underfloor structure and a new roof (with a sunroof that’s been moved rearwards to be more rear-cabin-focused). The center console is new and has been extended further into the rear cabin… The production line has needed new fixtures, jigs and processes to account for the longer bodies.”

The EWB’s extra length isn’t, as you’d expect, some sort of proportional strangeness—it actually works rather nicely—but the colossal-ness of the new rear doors are. They’re HUGE. They have to be, of course, to let rear passengers in and out of their mobile living room with more ease, but they’re veering into the “comedically large” territory.

In order to make the EWB Bentayga stand out from its smaller, lesser siblings, it gets some cosmetic tweaks, too. On the outside, there’s a new vertical vane grille, 22-inch wheels, and, of course, those massive rear doors.

Inside, the rear cabin has been redesigned for utmost comfort, there are new veneers and trims, and the doors can power-close now. Obviously, it’s not simply a car to be chauffeured in—some customers may fancy it as a family car. To make sure everyone’s happy, there are three ways to have your rear seats—either as two hefty thrones with a fancy center console, two seats with an occasional middle and a foldaway armrest, or a traditional bench.

Depending on which arrangement you get, there’s a world-first hidden in there—the Airline Seat Specification comes with 22-ways of adjustment and its “wellness” functions keep you comfy but also stave off fatigue. The seat can sense how warm and humid it is out, adjusts its cooling or warming to keep things optimum, and you can link the armrest heating to match. It’ll also make tiny adjustments to pressure points (177 changes over six zones) to keep you perky. You don’t get that on a Blower. Naturally, you also get dual rear-ionizers to mop up nasty particulates that could irritate important noses. Basically… Bentley makes magic seats now?

Now, the EWB is a flagship of sorts, so it needs to come with extra special bits to make lesser mortals feel like they’re missing out. Those special bits are as plush as they come. New diamond quilting is a highlight—it gets a new sub-one-mm perforation pattern that stretches from the center out.

On the doors, that quilting extends from one end to the other, giving an asymmetric pattern that highlights the doors’ length. Obviously, the door diamonds aren’t simply “there” as you’d get in some chump car. That would be absurd. They can be 30 different colors that are adjustable from the infotainment screen or remote.

Maria Mulder, Bentley’s Head of Color and Trim, talked me through how the new jazzy diamonds work. “The shape and style of the EWB quilting were derived from extending the square door quilting seen on the current Bentayga to match the concept of the extended wheelbase—extend the car, extend the quilt,” she said. “The quilting was then given a more organic and decorative form, to enhance the ‘driven’ experience of the rear occupant, and reflect the elevated, luxury positioning of the product.”

The way Bentley managed to get a more “organic” form was, as you’d expect, far from simple. Mulder and her team used finer thread—the stuff usually reserved for embroidering logos on headrests—and fiddled with the process of actually applying it. They used cameras to check where the thread is in comparison to the leather perforation. The result is softer, smoother, and slinkier quilting.

And what about the lighting setup? Witchcraft? No. Engineering: “The perforation pattern itself was meticulously hand-drawn to match perfectly with the quilting pattern that it sits within, and offers a unique user experience,” Mulder said. “The door quilting is a consistent one-mm perforation size to maximize the light emitted through the leather. However, the perforation on the seat transitions from 1.1mm to one mm to 0.8mm. This is to create a graduating, fade-out aesthetic from the ventilation perforations on the seat insert panels and gradually up the seat. Offering perforation as a process to deliver decorative pattern in the interior is a totally new innovation for the EWB.”

If fancy diamonds aren’t your jam, perhaps you’ll enjoy a new metal overlay. We’re talking single-piece metal slices between 0.075 and 0.1mm thick, about as much as a human hair. Mulder explained how Bentley’s craftspeople made them: “To create the inlay designs, a process called ‘photo-etching’ is used. A very fine stencil of the design is laminated to the metal. After some intermediate steps of UV light exposure and development of the laminate, the main process then is to chemically etch away the areas of metal not wanted, leaving only the inlay design. Etching means there is little manual handling or cutting of the material so the risk of damage is less, and the precision that can be achieved is incredibly high.”

While this tech is exclusive to the EWB, if you have a quiet word with the team at Mulliner, there’s a strong chance you can have it on a smaller, less plutocratic car from the lineup.

After a quick look around the car, it’s clear that the Bentayga EWB is A Special Thing. It’s huge, plush, comfy, and has big doors. Of the two that were on display, a muted purple rather suited the car in all its vastness, though it’s quite easy to imagine most people will want the biggest car to come in a dark shade so they can look like a sort of family-having Batman as they hop from meeting to meeting.

Comically large doors aside (they really are massive and once you see them, you really can’t unsee them, and they might well haunt your dreams as they do mine), Bentley’s managed to keep the Bentayga EWB looking proportionally correct. There’s always a risk with these things that you end up with a pseudo-troop carrier affair, albeit one with camera-guided quilted leather. Any longer than that and it runs the risk of parody, but not so here.

Taking a seat inside, there are few comfier, more cosseting cars out there. The leather is so soft I worried that my jeans would cause it to wither away, and while the metal inlay in the veneer may seem like a needless act of expensive engineering, you’re hard-pressed to say it’s not really rather impressive. (It is very impressive.)

I’m a little torn by it though—I get why Bentley’s building it (because people want more space), but part of me wonders who gets into the back of a normal Bentayga and finds it cramped. Giants, perhaps?

Is it a proper Mulsanne replacement? As far as Bentley’s concerned, it very much is—bigger is apparently better, so why not make the biggest thing of all and hoover up all the former Mulsanne customers? As far as I reckon though—and keeping in mind that I haven't driven it yet—it’s not a proper replacement. It’s entirely, wonderfully, fit for the purpose, but it’s not the kind of car you see driving down the street and wonder, “Is there a world leader in there?”

There’s a risk of sounding something like a stuck record—or YouTube commenter—pining for days of yore, but when you think of a Bentley, the idea of a big SUV isn’t really “it,” is it? The Bentley in your brain is a huge sedan with a hood longer than your dining room, a trunk to match, and a rear cabin that barely needs stepping out of, rather than being a long drop down to the ground. The EWB, however, will likely sell incredibly well—Bentley reckons 45 percent of Bentayga sales will be for The Big One. Soon enough, the idea of a Bentley flagship will be a big SUV, and people like me will seem terribly old-fashioned.

You’ll be seeing them parked outside skyscrapers all over the world later this year. No pricing was announced just yet.

Alex Goy is a UK-based journalist. His work has appeared in British GQ and Road & Track.

The Postal Service Seized a 2018 Bentley Bentayga. Now You Can Buy It

The six-figure SUV is available on a government auction site with some shady history.