A 14-Wheeled Lada Is Genius on Paper, Needs Work in Practice

We love the pyramid of wheels, but it does struggle to put power to the ground. 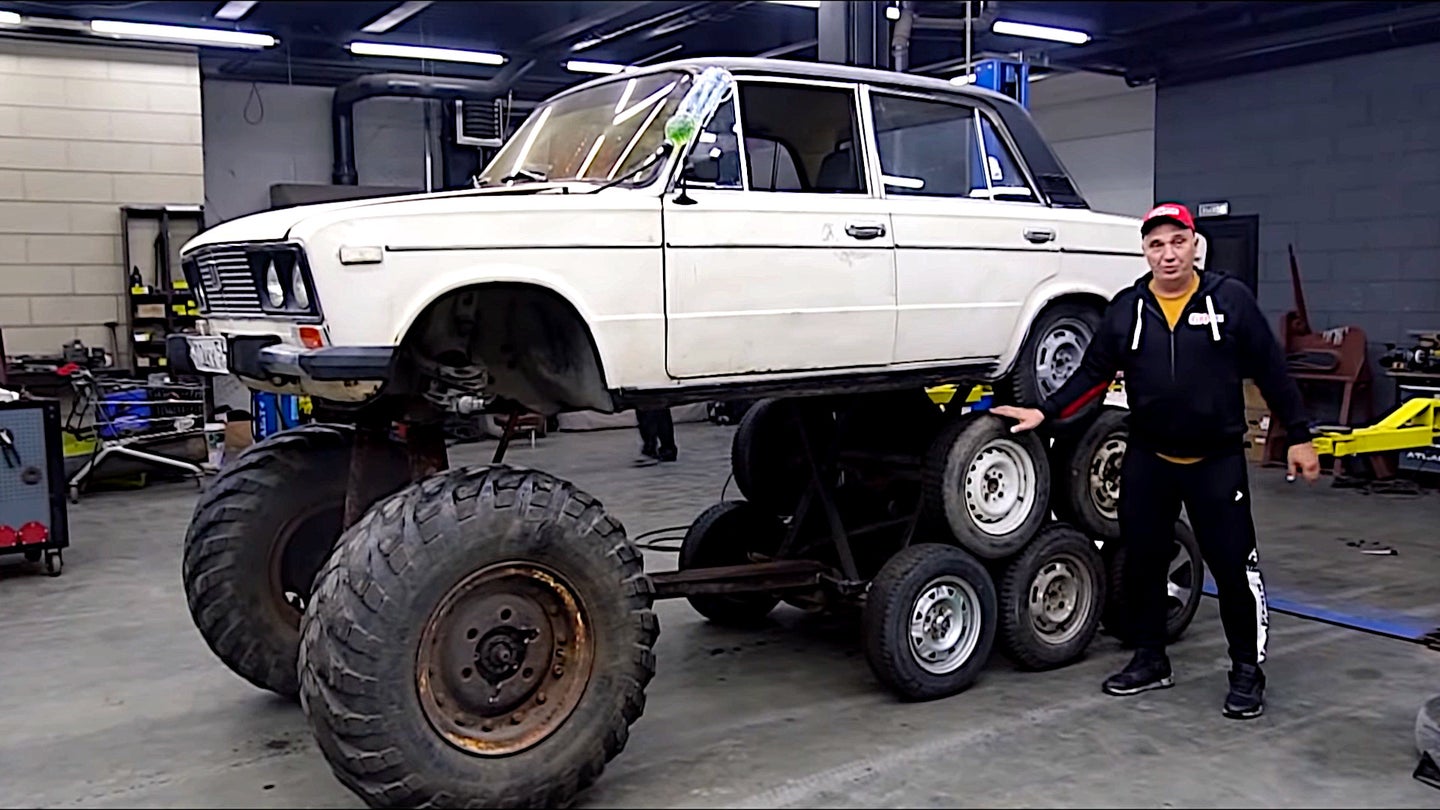 The gang at Garage 54 are well-known for their automotive antics. Whether it's building a working G-Wagen out of ice, or swapping a still-running engine into a car, they've achieved much in the realm of car-based silliness. Their latest build kits out a Lada sedan with a full fourteen wheels, though perhaps not in the way you'd think.

It's a build that apes an 8-wheeler Toyota we saw earlier this year, in that it stacks up many extra wheels at the rear end in a pyramid-type fashion. Garage 54 take the concept further however, with a three-layer pyramid consisting of three wheels at the bottom, two in the second layer, and a single driven wheel at the top which transfers torque to the whole stack.

This design leaves the rear of the Lada sitting up rather high in the air. To match this, huge set of monster tires are fitted to a front axle which is welded to the Lada with fat metal stilts. A shaft extension is then fabricated to allow the steering to turn the front wheels.

The result is a Lada sporting a full fourteen wheels that towers over other conventional vehicles. It's not all smooth sailing, of course. Only the top set of rear wheels are driven by the engine, with the tires then mating with those on the lower layers to transfer power to the ground. This leads to an issue that if the tires aren't in close contact, they tend to slip rather than driving the car forward. Things only get worse when the car drives through a puddle and the tires all get wet, but the Lada is able to slowly make its way around regardless.

The team plans to take the Lada out for a proper adventure soon, noting that they'll need either a soft surface or a very smooth piece of asphalt due to the lack of suspension in the build. Notably, the Lada is also running a diesel engine that the gang converted to run on gasoline, as it has more torque than the stock Lada motors they normally have on hand.

Obviously, it's not a build with a lot of real purpose beyond being funny. However, for those watching along at home, that's kind of the whole point. We look forward to someone one-upping the build with a Crown Victoria with 22 wheels standing a full three stories high. Get on it, and send us your video when you're done.

Nails are the bane of every driver’s existence…or are they?