Swapping a Running Engine Into Another Car Takes Incredible Skill

Watch as a running motor is unmounted and transferred into another car without it shutting off. 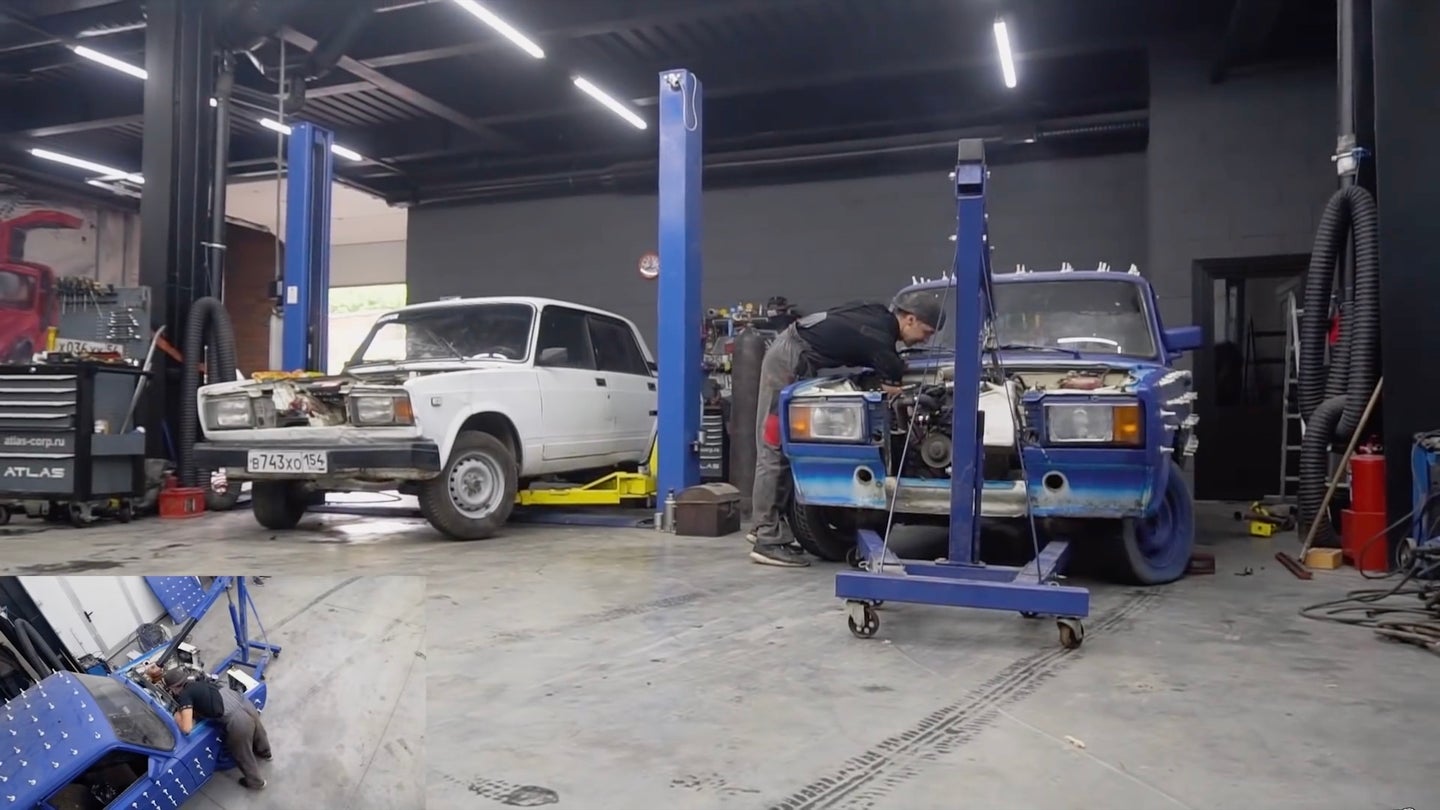 Trying to fix a car while it's running is alike open-heart surgery where the heart will devour your hand if it slips. Maybe it's fair to say, then, that skilled mechanics and surgeons should be considered equals, especially if they can perform jobs as risky and complex as transferring an engine from one car to another while it's running.

Such was recently accomplished by Russian YouTube channel Garage 54, which performed the transplant on a pair of what appear to be Lada Rivas. To prep for the job, they cut out both cars' grilles and isolated the circuits needed to keep them running, specifically coolant, ignition, and fuel. With that done, they switched on the camera to record the job in a single, seamless take, drove the donor car into their shop to show it moves under its own power, and set to work.

Being tethered in only by the driveshaft and engine mounts, the engine and transmission come out in a heartbeat and swung free on the engine crane scarcely five minutes after the wrenching began. Hitches in the plan, however, hit hard and fast, with the engine first stalling due to a suspected carburetor flood, then grinding against the frame and spilling fluid before stalling again. Even so, the job was basically done 15 minutes thereafter, the engine being bolted in and capable of moving the car.

Having one (mostly) running swap under their belts, they decide to return the engine to its original home, this time without a single stall. Their experience allowed them to switch the engine back over in only about 12 minutes—no stalls—proving a running swap is definitely doable. Purposeful, though is another matter, considering the complexity of making an engine run outside a car and the elevated risk of injury from such a touchy process.

All in all, Garage 54's experiment serves no purpose except entertainment, and maybe as a proof-of-concept for some future B-movie. What this video and Nikita Mazepin's Formula One career so far do show, however, is that some Russians are great at keeping things spinning—whether or not that's what you want.

The ISS crew repeatedly lost contact with Earth for 11 minutes after a thruster malfunction on a docked craft.

This Manual-Swapped Infiniti Q50 Is a Proper Stateside Skyline

The Q50 was never offered here with a stick in its highest performance trims. That doesn’t mean nobody wanted one.

It turns out Y-rated tires hold up to a lot more speed than you’d expect, but 800+ mph is a bit much for any rubber.