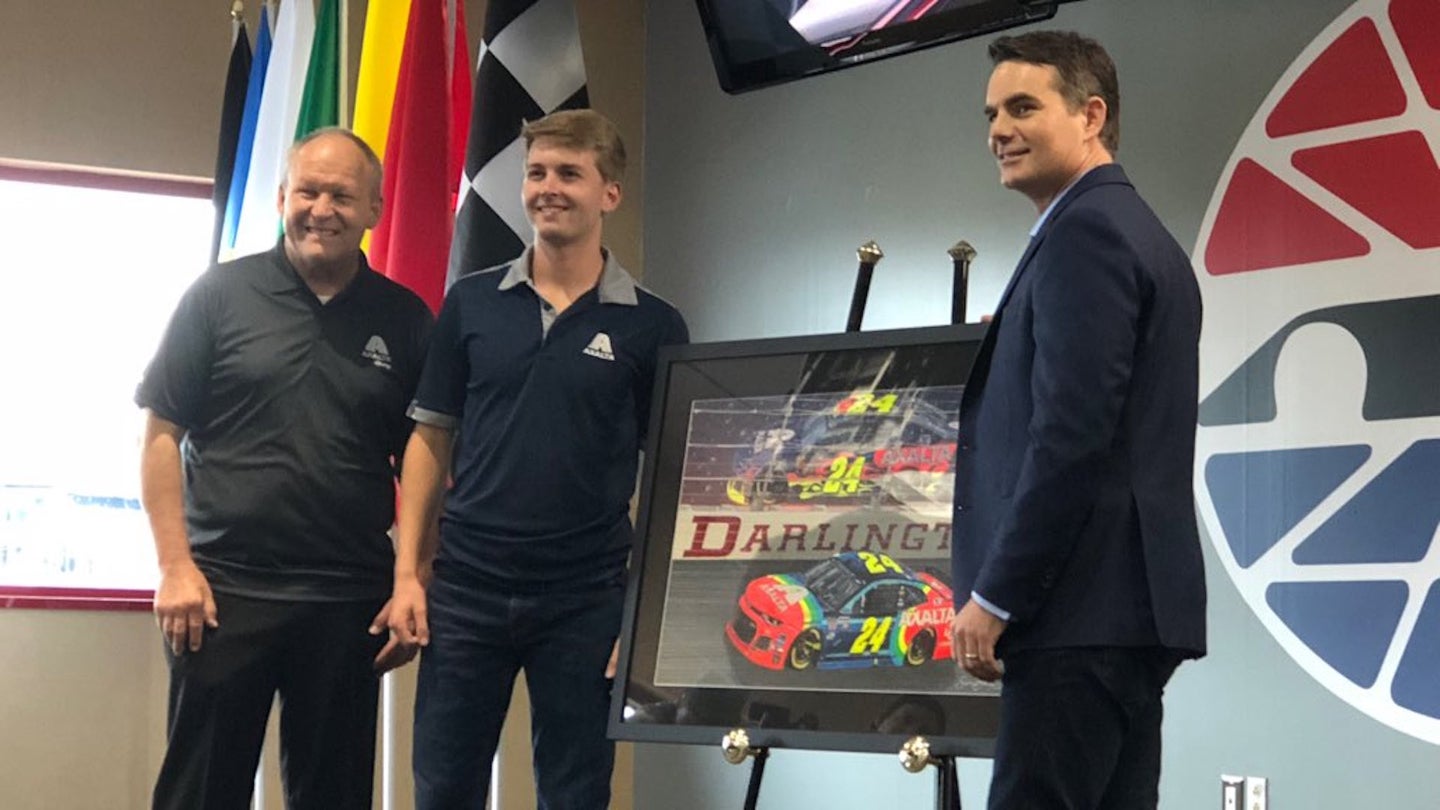 William Byron inherited the iconic No. 24 car at Hendrick Motorsports for his Monster Energy NASCAR Cup Series rookie season when teammate Chase Elliott transitioned to the No. 9 ahead of 2018. When the series heads for Darlington Raceway in South Carolina for the retro-themed Southern 500 on Sept. 2, the Chevrolet will wear its most iconic paint scheme. Byron’s car at Darlington will pay homage to recently-announced 2019 NASCAR Hall of Fame inductee Jeff Gordon, who drove the No. 24 from the beginning of his NASCAR premier-series career in the final race of the 1992 season at Atlanta Motor Speedway through his final full season of competition in the series in 2015.

Byron’s throwback paint scheme for this year’s race at Darlington was unveiled at Charlotte Motor Speedway in Concord, N.C., ahead of the running of the 2018 Monster Energy NASCAR All-Star Race. Among those on hand for the unveiling was artist Sam Bass, who designed Gordon’s original “rainbow” paint scheme that Byron’s car will carry in the Southern 500.

The rainbow paint scheme on Byron’s car isn't specific to any particular season, but instead, is intended to honor Gordon’s entire Cup Series career. Gordon, though, raced with a paint scheme most similar to the one that will be on Byron’s tribute car throughout the 1990s.

“I was just a young kid that was anxious to get out there and show what I could and excited about the opportunity to be at Hendrick Motorsports and hoped that I would be able to do my part and go on and win a race, let alone 93 of them,” Gordon said during the unveiling. “I certainly never looked far enough ahead that I would have ever thought we were creating something that would be part of NASCAR history or a throwback to the history at Darlington with a 20-year-old kid behind the wheel that wasn’t me.”

Gordon is third on the NASCAR premier-series all-time wins list with 93 victories, trailing only NASCAR Hall of Famers Richard Petty and David Pearson. He also is one of only four drivers to have four or more top-series championships, with four. The only drivers with more are Petty, Dale Earnhardt and Jimmie Johnson, each with seven.

“Jeff’s got a huge history in the sport, and to follow that and be able to carry his legacy and, hopefully, have success with it is my goal,” Byron said.

Byron is currently 19th in the championship points standings, 12 races into his rookie season. He has a best finish of 10th, coming at Texas Motor Speedway in April.

NASCAR’s longest drive of the year is also one of the most grueling events of all three motorsports series competing on the Greatest Day in Racing.