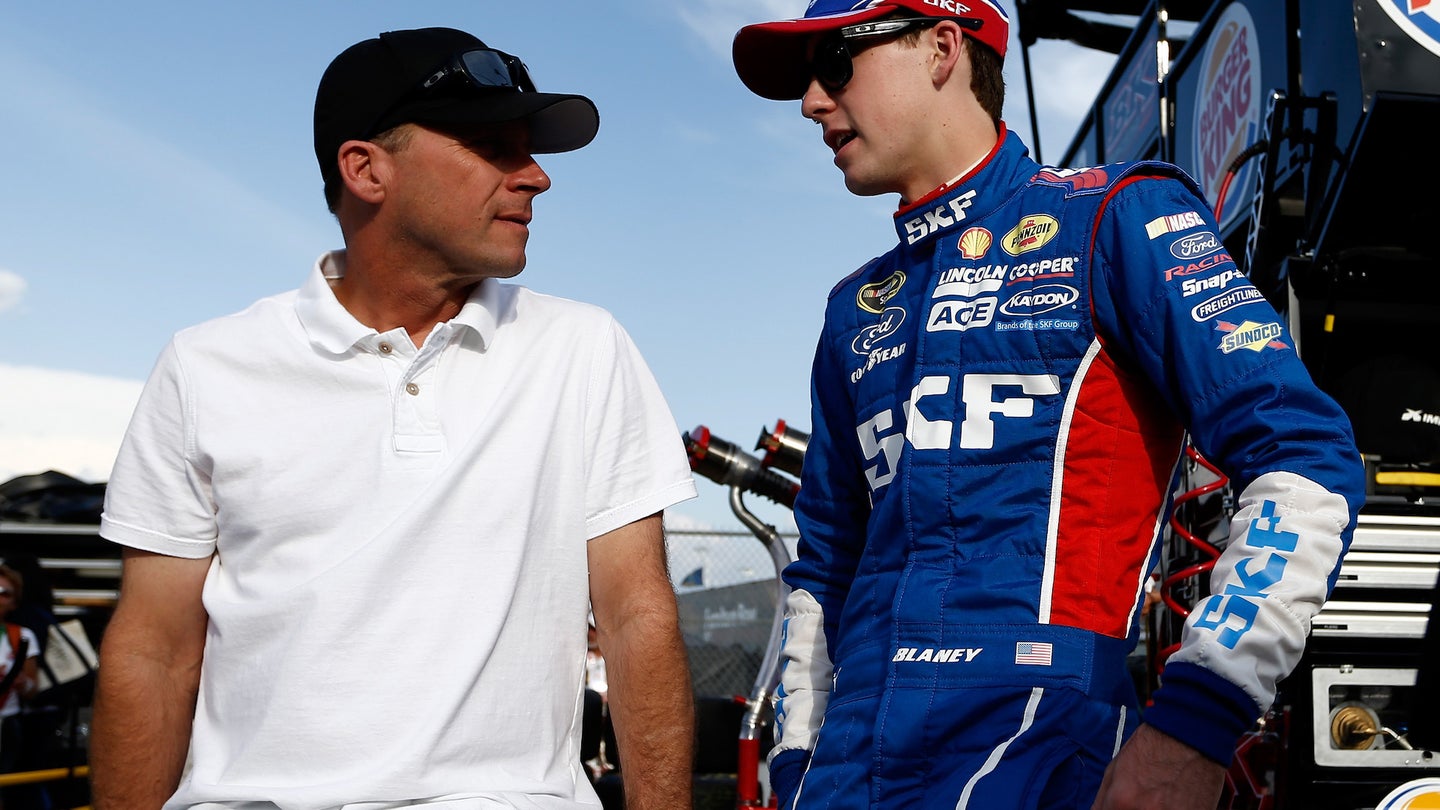 Ryan Blaney and his No. 12 Team Penske crew have become the latest Monster Energy NASCAR Cup Series competitors to unveil a throwback paint scheme for the 2018 Southern 500, scheduled for Sept. 2, at Darlington Raceway in South Carolina. Blaney’s Darlington paint scheme, unveiled Wednesday, honors his father and former NASCAR driver Dave Blaney. The honor was a surprise to the elder Blaney, who was on hand for the unveiling that was broadcast live on NASCAR.com.

“It’ll look good in victory lane,” Dave said when he saw the car.

Ryan's No. 12 car will carry a paint scheme at Darlington similar to the No. 77 Jasper Motorsports Ford driven by his father in the Cup Series in 2002 and 2003, a ride Dave Blaney first climbed into when his son was eight years old.

“It’s special,” Ryan explained. “I’ve been able to run some really cool paint schemes and we were trying to figure out Darlington. We were trying to play with the Menards colors, and my dad’s Jasper car came up. I thought that would be awesome.”

Ryan Blaney is in his third full season of competition in NASCAR’s top series, his first as a driver of Penske’s No. 12 after two full seasons piloting the No. 21 Ford for Wood Brothers Racing—a team with a strong technical alliance with Team Penske. The latest Blaney in NASCAR claimed his first-career series win in 2017 at Pocono Raceway in Long Pond, Pa. In the first nine races of the 2018 Cup Series season, he has three top-fives and five top-10 finishes, putting him eighth in the championship points standings.

The younger Blaney has three-career Cup Series starts at Darlington, dating back to a part-time schedule in 2015, but he has struggled there. Blaney posted a 13th-place finish there in the No. 21 in 2016, but his other two Darlington starts resulted in finishes of 30th and 31st.

Dave Blaney made 473-career starts in the NASCAR Cup Series between 1992 and 2014. He ran his first full Cup Series season in 2000 as part of a rookie class that also included 2003 champion Matt Kenseth and 15-time Most Popular Driver Dale Earnhardt Jr. He finished in the top-five four times, one of those coming from behind the wheel of the No. 77 at Darlington in 2003.