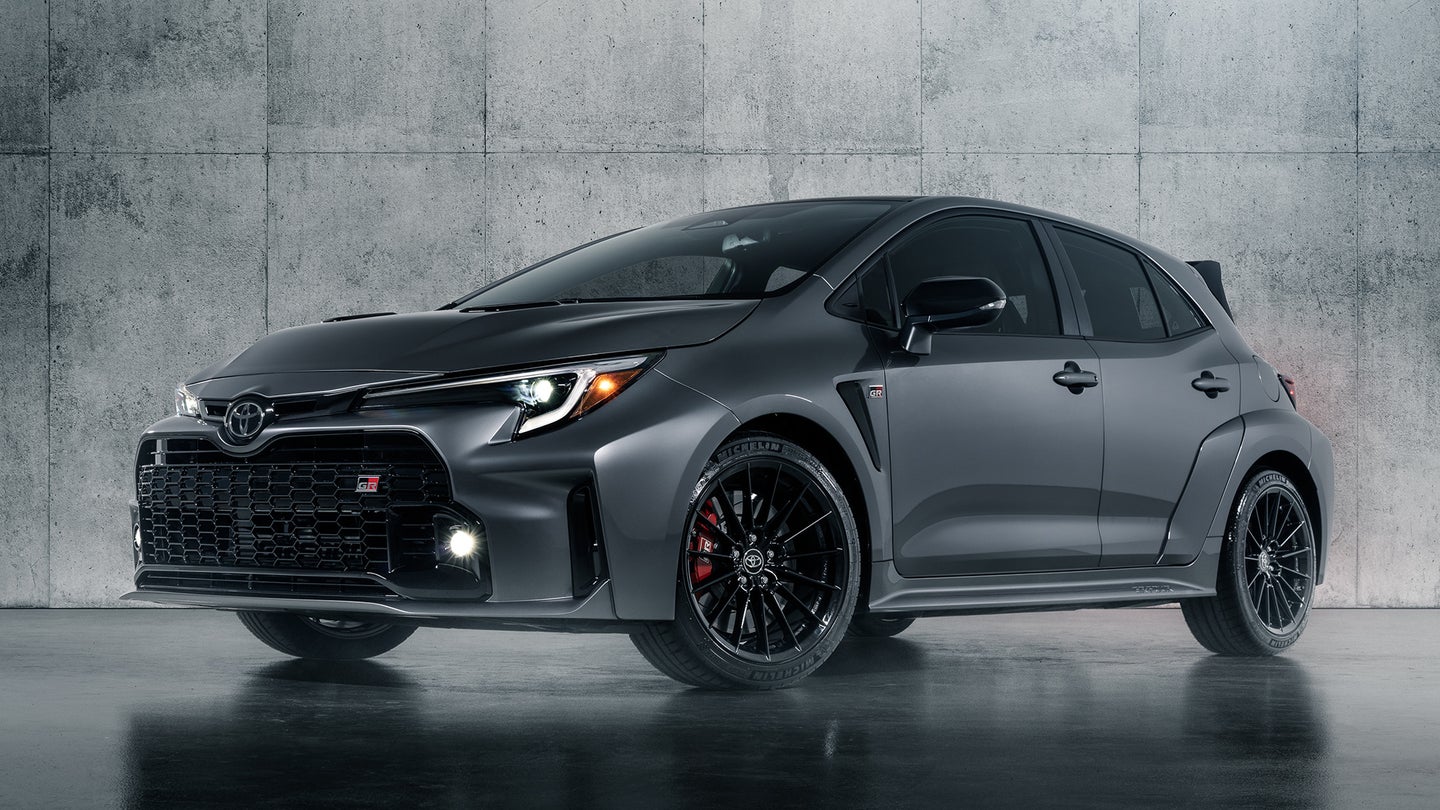 It's here. It's finally here. After years of rumors, speculation, hopes, dreams, and a dealer source, the 2023 Toyota GR Corolla has finally arrived. It's kicking down the door with 300 horsepower and all-wheel drive. It will be offered exclusively with a manual and will be available to buy in the United States. Have I seen God? By George, I think I have.

The current Toyota Corolla already looks cool; the GR version takes that and puffs it up like a bee sting. Wide fenders, a giant, gaping front grille, a massively flared rear bumper, and vents and holes cut everywhere in the body scream out a car that's meant to be kicked around. The front door panels and hood are made from aluminum and the tapered shape of the nose directs air over the rear spoiler for maximum downforce.

At the heart of the new GR Corolla is a true firecracker of an engine: the DOHC, 12-valve, turbocharged, 1.6-liter, three-cylinder G16E-GTS that's also found in the GR Yaris. But rather than the 268-hp output in the Yaris, the engine makes 300 hp and 273 pound-feet of torque in GR Corolla guise. (Those quick with a calculator will figure that's 187.5 hp per liter. By comparison, a Bugatti Chiron Pur Sport produces 185 hp per liter. Puny thing.) The increase in power comes from better exhaust efficiency in the form of a three-piece muffler that ends in stainless steel tips. Toyota says this setup helps cut down on noise and exhaust pressure.

Sending power via a six-speed manual transmission (that comes with rev-matching) to all four wheels, the GR Corolla uses what Toyota calls its "first sports all-wheel-drive system in over 20 years." The last time the automaker built anything like that, it was the Celica GT-Four. Toyota says the AWD system was built in collaboration with its Gazoo Racing rally team and perfected by WRC drivers. Depending on the mode, it can split its front/rear torque distribution 60:40, 30:70, and 50:50. It also offers optimized settings for snow, dirt, and rain. Then, there are optional front and rear LSDs, while 4WD open differentials are standard.

The 2023 GR Corolla has a wheelbase of just 103.9 inches—the same as a regular Corolla—but is a whole 2.4 inches wider. Weighing in at 3,249 pounds, it's also about 200 pounds heavier than the regular, front-wheel-drive Corolla.

Inside, there's a 12.3-inch driver information cluster that includes stuff like a GR meter that indicates gear position, 4WD mode, and turbo pressure. A short-throw shift lever is positioned in a natural spot. An eight-inch infotainment touchscreen offers wireless Apple CarPlay and Android Auto as standard.

But best of all, the GR Corolla will come with a physical handbrake. Will people use it to immediately rip sick drifts in empty parking lots? Who's to say. Certainly not me.

Built at Toyota's GR Factory in Motomachi, Japan (which also produces the GR Yaris and has produced the A80 Toyota Supra and Lexus LFA), two GR Corolla trims will be offered. The limited-run Circuit Edition models will be available first with forged carbon fiber roofs, vented hoods, and rear spoilers. Inside, the cars will have red accents and a signed shift knob. The Core models, which will come later, will have aluminum hoods and gloss-black rear-lip spoilers.

Toyota did not announce pricing at this time, but good luck regardless finding one at your local dealership without some ridiculous "market adjustment" fee. The car will go on sale later in 2022 and perhaps I will be able to afford one in 10 years' time.

But I'm so stoked, you guys. Seeing as there are barely any manual, all-wheel-drive hot hatches left, it is thoroughly excellent that there's a brand-new one to look forward to in 2022. And from Toyota of all automakers! Toyota really seems like it's leaning into the fun this decade, what with bringing the Supra back and not killing off the wonderful GR86. We're not getting the GR Yaris, which is still a shame, but we are getting this GR Corolla, which is frankly more than enough. I'm so happy I didn't have to end this blog with some depressing sentiment about forbidden fruit.

And with Subaru firmly out of the STI game and Mazda too cowardly to attempt anything remotely similar, where else are JDM enthusiasts supposed to turn but here? On paper alone, the new GR Corolla seems like the real deal. It has a properly hotted-up engine, terrifically exaggerated looks, and will only be sold with three pedals. We may give Toyota shit for dragging ass on investing in and rolling out battery-electric vehicles, but one thing it's never done is forget about the people who love to drive.