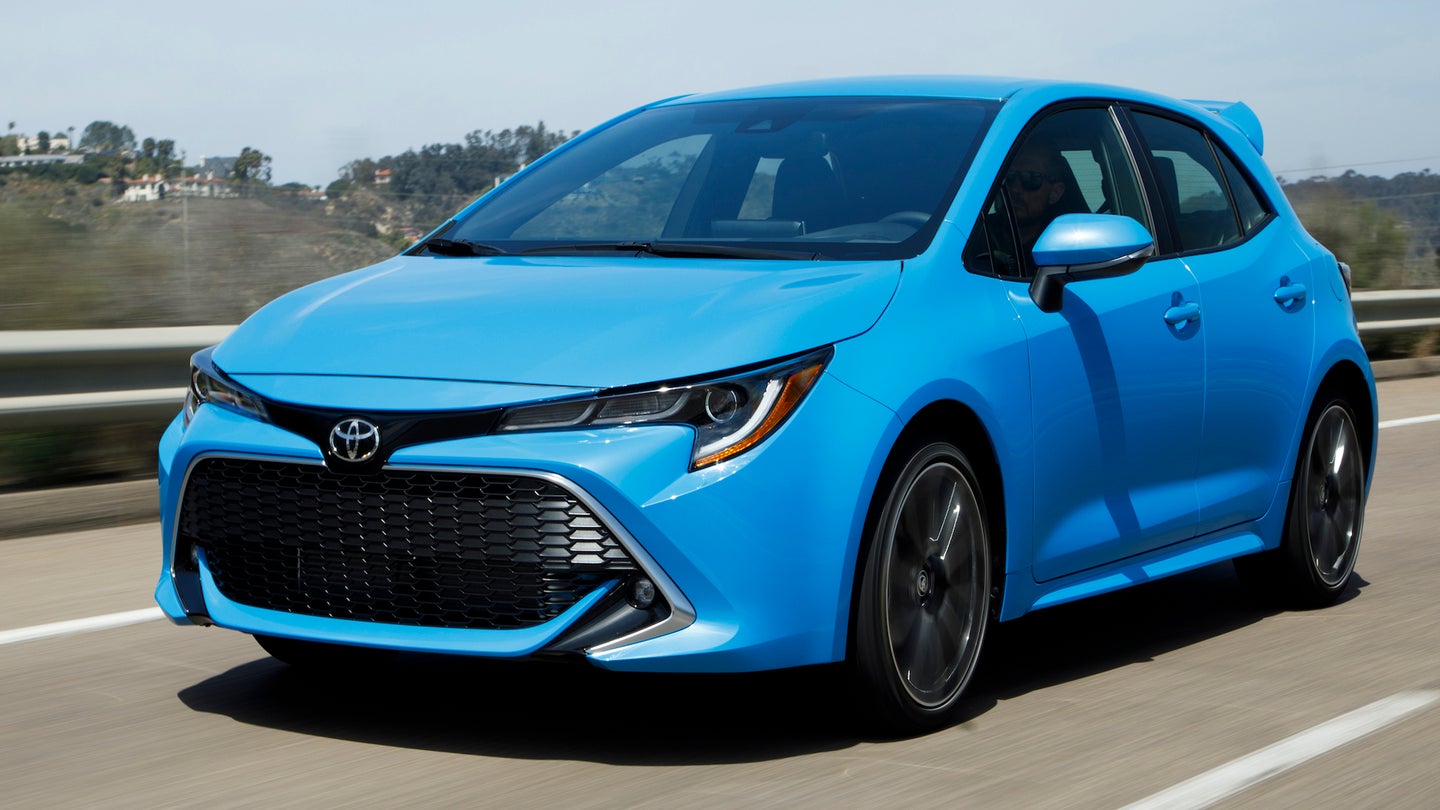 A Toyota Corolla hot hatchback is coming, that much is clear. Toyota has been teasing the car for months, and years of leaks have given us a good idea of its mechanical makeup. Think the GR Yaris' turbo-three, all-wheel drive, and so on. Now, some of these details have been confirmed to The Drive by a source within Toyota's dealer network, who says the GR Corolla will definitely have a manual transmission, a factory widebody, and possibly even an unusual, three-tip exhaust setup.

This source informed me that some Toyota dealers have already seen a prototype, which was apparently on display at a private preview event in Las Vegas late last year. The prototype is said to have been camouflaged, potentially making it the one Toyota showed us in October. This car was apparently more or less as the rumors have described, with a turbocharged three-cylinder, a manual box, and mechanical all-wheel drive. It'll be a widebody hatchback, not a sedan, though such wouldn't be unwelcome.

The source wasn't able to provide any further detail; performance specs, pricing, and its exact release date remain uncertain. However, they did tell me they expect the GR Corolla (or Corolla GR-Four) by the end of the year, emphasizing that this isn't yet set in stone.

Much of what they told me has been corroborated by both stories in Japanese media and a recent story from Motortrend, which, citing "well-placed sources," reported the GR Corolla's manual to be a six-speed. They added that the AWD system will come directly from the GR Yaris, bringing along with it a center differential with varying torque splits, and that the GR Yaris' 1.6-liter three-cylinder will gain power for its appearance in the Corolla. This echoes an earlier report alleging that the GR Corolla could have up to 296 horsepower, or enough to make it a close competitor with the Volkswagen Golf R.

Said report also foretold some of the GR Corolla's body modifications, as outlined by both my and Motortrend's sources. They spoke of a widebody and agreed with MT that the GR Corolla will get a different front bumper, as well as aero tweaks later reported to be a mock diffuser. There remains some conflict on the GR Corolla's exhaust setup, with my source saying three tips and MT's claiming two, though it's likely the prototype shown off in front of dealers was incomplete and may have simply routed all exhaust through the center for testing's sake.

Regardless, exhaust setup is a far less interesting subject than price, which the aforementioned Japanese rumor alleged could fall in the mid-$30,000s. That'd make the GR Corolla significantly cheaper than a Golf R, despite being nearly on par performance-wise. It'd also position this Corolla between the GR86 and the base, 2.0-liter Supra, allowing it to fill in as an adjunct third member of the "Three Brothers" sports car lineup Toyota has committed to bringing back. It's not yet clear if Toyota considers it a full member of the trio, though if it doesn't, that leaves the door open for more good news down the road: One last, potentially mid-engine Toyota sports car.

The Drive reached out to Toyota regarding these claims, though it declined to comment.