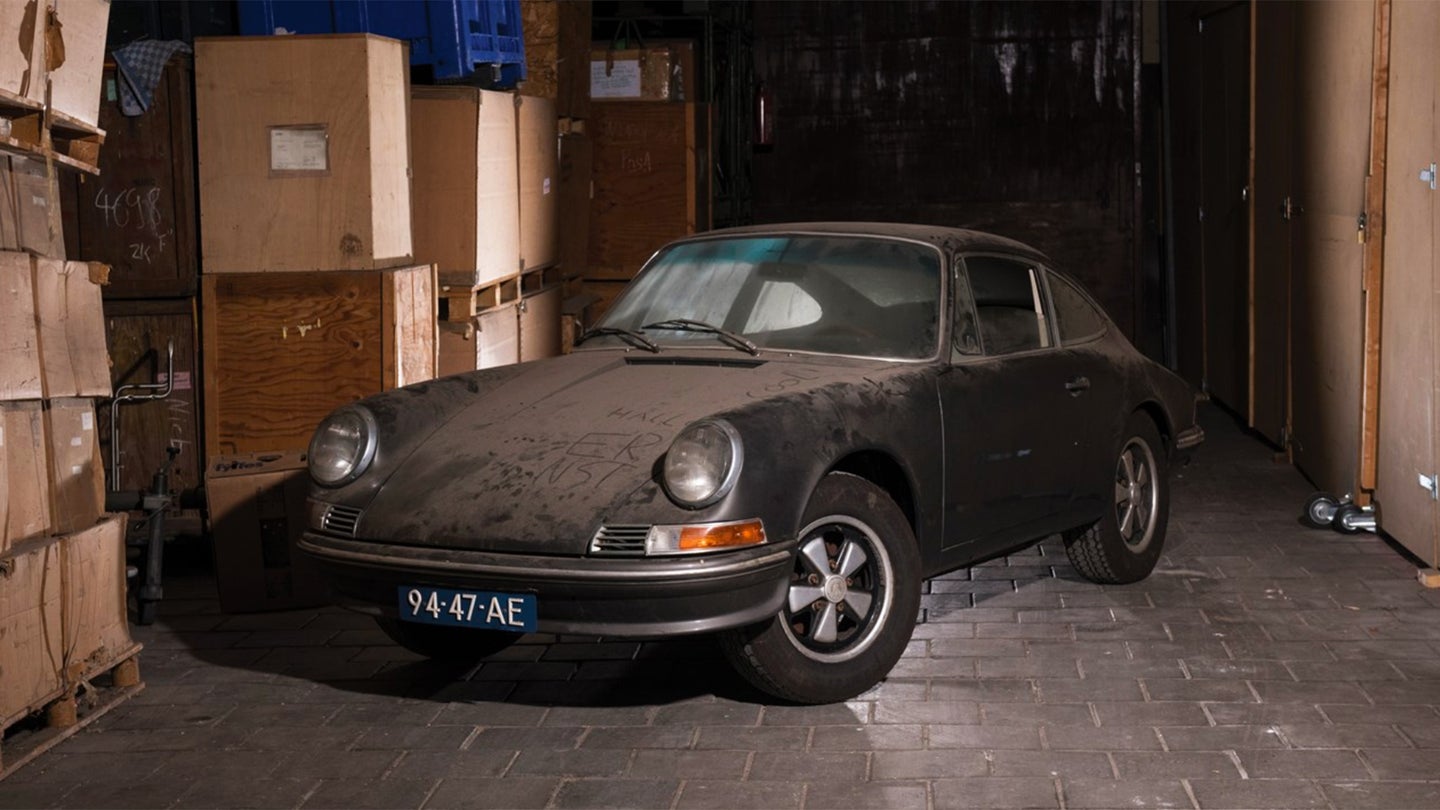 We know all too well how much prices for vintage Porsche 911 models have skyrocketed in recent years. Seven figure price tags have turned them into shiny baubles for an elite few—but consider this barn find 1965 Porsche 912 set to be auctioned by Sotheby's next week an alternative path to joining their ranks.

The 912 may lack the cultural cache of the iconic 911, but it's only a matter of time before the zeitgeist (and inflation) send its value soaring as well. First launched in 1965, it was Porsche's attempt at an entry level car to replace the outgoing and beloved 356 model and take the sting out of hiking up the price of the 911. But a funny thing happened on the way to the forum: With superior weight balance and handling, the four-cylinder 912 ended up handily outselling its more expensive sibling. At first, that is.

Though the car was popular with drivers and important for Porsche—the company celebrated its milestone 100,000th car with a police-spec 912 Targa—Volkswagen executives decided to kill off the 912 in 1969 for a number of boring business reasons. It was replaced by the jointly-developed Porsche 914, which no longer shared the flowing, recognizable shape of the 911.

And that's a shame, because as any owner will tell you, the 912 is a joy unto itself to operate. Sure, it's down on power and it doesn't have a righteous flat-six engine, but the lighter 1.6-liter load out back makes for a nimbler and more direct driving experience. It's so good, in fact, that Porsche and Volkswagen couldn't resist bringing it back to the North American market in 1976 as a single-year stopgap between the end of 914 production and the launch of the new front-engined 924. That model looks the business, but it's saddled with an 86-horsepower Volkswagen engine.

So let's stick with the glory years of the 912, well-represented by this 1965 model that the auction listing notes was purchased new as a surprise Christmas present by a wife for her lucky husband in the Netherlands. The first owner "enjoyed as intended" for twenty years, then sold it to a mysterious man named Mr. Grooters, who had the car serviced and undercoated before parking it in a haphazard storage facility and walking away. It was only recently discovered and pulled out to be sold as-is without reserve in Paris on February 7.

With just over 31,000 miles on the odometer, it's not exactly straight out of the showroom, but it's in far better cosmetic condition than its dusty coat reflects. Inside and out, a good detailing would make a world of difference—though the engine is probably in dire need of a very expensive overhaul. Still, with an expected sale price of under $90,000, this is one vintage Porsche that would require only the smallest of white collar crimes to subsidize.