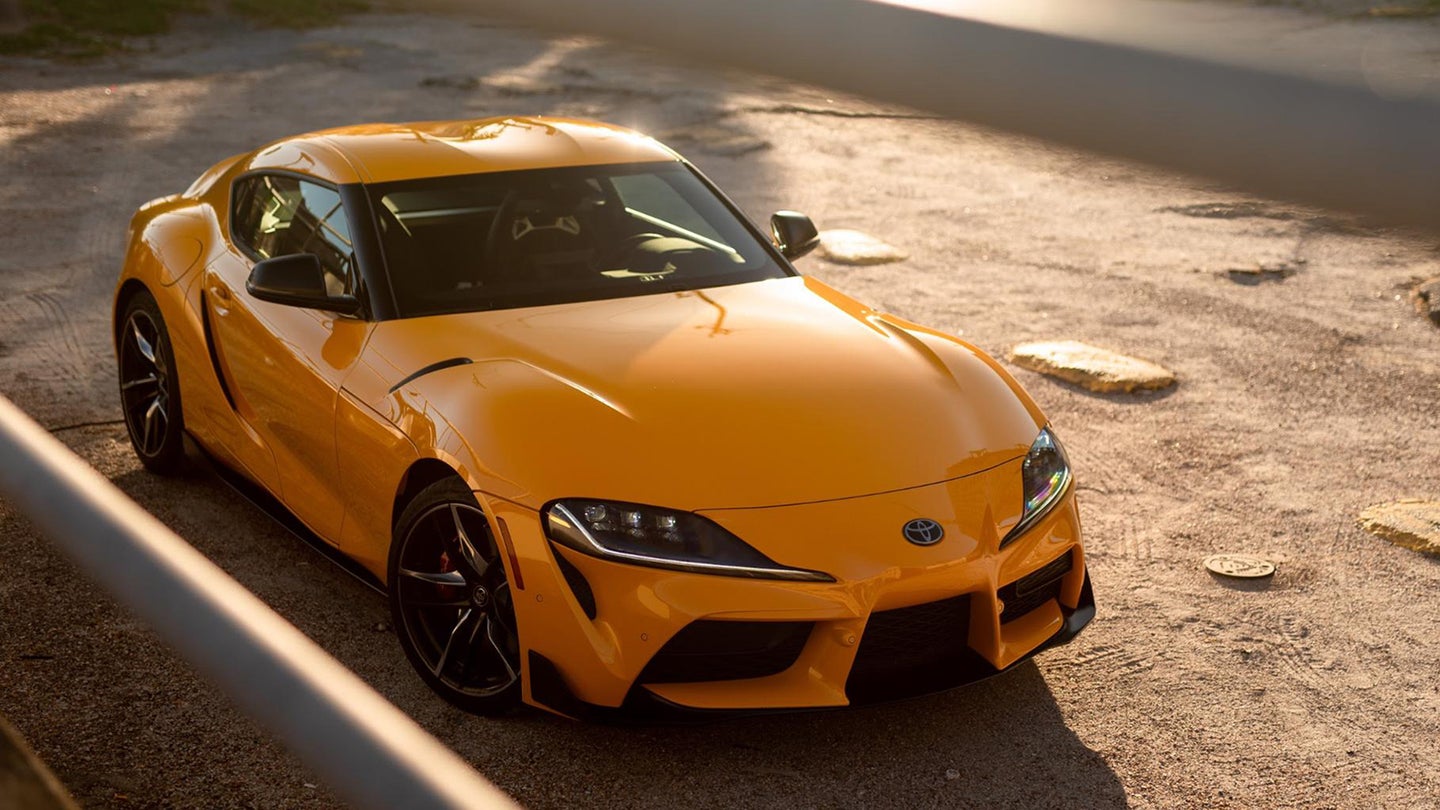 My personal taste in cars is pretty eclectic and varied these days, but once upon a time, I was a devout Toyota Supra Enthusiast. Nowadays I putter around in old JDM vans and slammed Hondas, cruising for fun and relaxation. But I got my start in the world of speed with turbocharged straight-six power and comfort to spare.

I had a 1988 MK3 Supra Turbo Targa as my first car. It was a mile-eater; a luxuriant and capable grand-tourer that I took drifting, autocrossing, and road-tripping for thousands of miles, then drove to work every day in. It wasn’t perfect for every task, but it was good enough at everything to truly earn the moniker of a GT car. So when I stepped into the shoes of my past self as I climbed into the driver’s seat of this brand-new, MK5 2021 Toyota GR Supra 3.0, I was in full Supra fangirl mode. I was also setting myself up for disappointment.

At this point, the story of the new Supra is well-documented: BMW platform, BMW engine, designed to be the Toyota-badged counterpart to the latest BMW Z4. The plan helped both companies keep costs down to get two new sports cars on the road at a time when that market is being swallowed up by SUVs and crossovers. But the BMW guts have never turned me off of the MK5, since Toyota’s finest work has generally included someone else’s help with the powerplant.

Dating all the way back to the 1960s, Toyota customarily worked very closely with Yamaha in its cars, such as the 2000GT, MK4 Supra, Celica GT-S. More recently, even the Lexus LFA had a Yamaha-tuned motor. The 86, of course, is largely a Subaru jam, and it’s a fun sports coupe that I have recommended to many people looking for an enthusiast-oriented daily driver. A Toyota with another manufacturer’s efforts under the hood is honestly something I look forward to. The automaker seems to do its best work when it can just focus on the handling and chassis.

So I didn't mind the BMW engine, because that company has an inarguably good track record there. And since it only comes equipped with an eight-speed automatic transmission instead of offering a three-pedal option, I expected a grand-tourer. That all makes sense. The dirty secret of the Supra line is that, at its core, it has always been touring-focused.

My MK3 wasn’t a perfect canyon carver. The steering had slop and the heft definitely made it a bit sluggish to switch directions. But I did 10-hour days of driving without soreness and with a big grin on my face as I floored it up an onramp or stomped the brakes heading into a highway exit. Despite its flaws, it was a fun car for tearing up the highway.

Armed with my experience, I approached the bright yellow Toyota I had for the day like it was a bold GT car.

I was already awed by the styling as I walked up. Supras are at their best when they scream for attention. There’s a reason so many Supra owners are so closely intertwined with their cars. It’s why I was a Supra owner. It's the kind of car that becomes less of a means of getting around and more of a personality attribute. Get it in the eye-catching yellow! Put the burbling, deep exhaust on it! Let the turbo sing as you rip through the tach!

A Supra has nothing to be shy of in the same way that Wayne Gretsky doesn’t have to pretend he was just an okay ice skater. In 43 years of existence, the Supra has proven itself plenty. I was sold that, at the very least, Toyota grasped this. The styling on the MK5 is divisive but it is not conservative. It lives up to that name.

And so I got in and pulled off the one-party trick this car has completely nailed—riotous, absurd acceleration with instant torque—and was immediately nailed with the infamous wind buffeting because I was foolish enough to have the windows down on a gorgeous morning in a grand-tourer. I rolled up the windows begrudgingly. Alright, that was something I'd read about. I didn’t expect it to be that bad, but whatever.

The suspension felt a bit stiff and putting it into Sport mode made the ZF eight-speed gearbox's shifts seem incredibly aggressive, so maybe I should have approached it more like a sports coupe rather than a grand-tourer. This wasn’t my expectation, but sure, let’s evaluate it as a sports car instead. To better illuminate this newfound revelation, I tossed the car into some corners.

Trying Out the Sporty Side

Right away, I noticed I could hardly see the corner coming because the greenhouse made an armored personnel carrier look airy. Not a great sign. And once I finally threw it into the turn, the steering was… not there. Numb. There was very little communication. It reminded me more of mediocre rental cars than it did any actual sports car, modern or classic. Don’t get me wrong—it was definitely responsive to the idea of turning and it had buckets of grip. But, God, it had too much grip.

High-speed cornering heroics will require a Senna-esque commitment. If you want to wring every last drop of handling prowess out of it, you would need to be at the very limits of human ability. This would have been less of a problem if the steering feedback didn’t feel like it was designed by an anesthesiologist. Put it this way: It’s a bit hard to be confident mid-corner when it feels like you’ve been sitting on your hands for an hour before you grab the wheel.

This particular gearbox is about as good as modern automatics get, but it's just no replacement for the proper manual that should be in a two-seat, two-door sporting car. I didn't find shifting with the paddles to have the level of involvement I'd want in a car like this. And sadly, leaving the computer up to its own judgment for gears was never satisfying, either. Putting it in Sport mode made it hyper-aggressive and poised for the limit, which required clinical insanity to approach in this car on public roads. 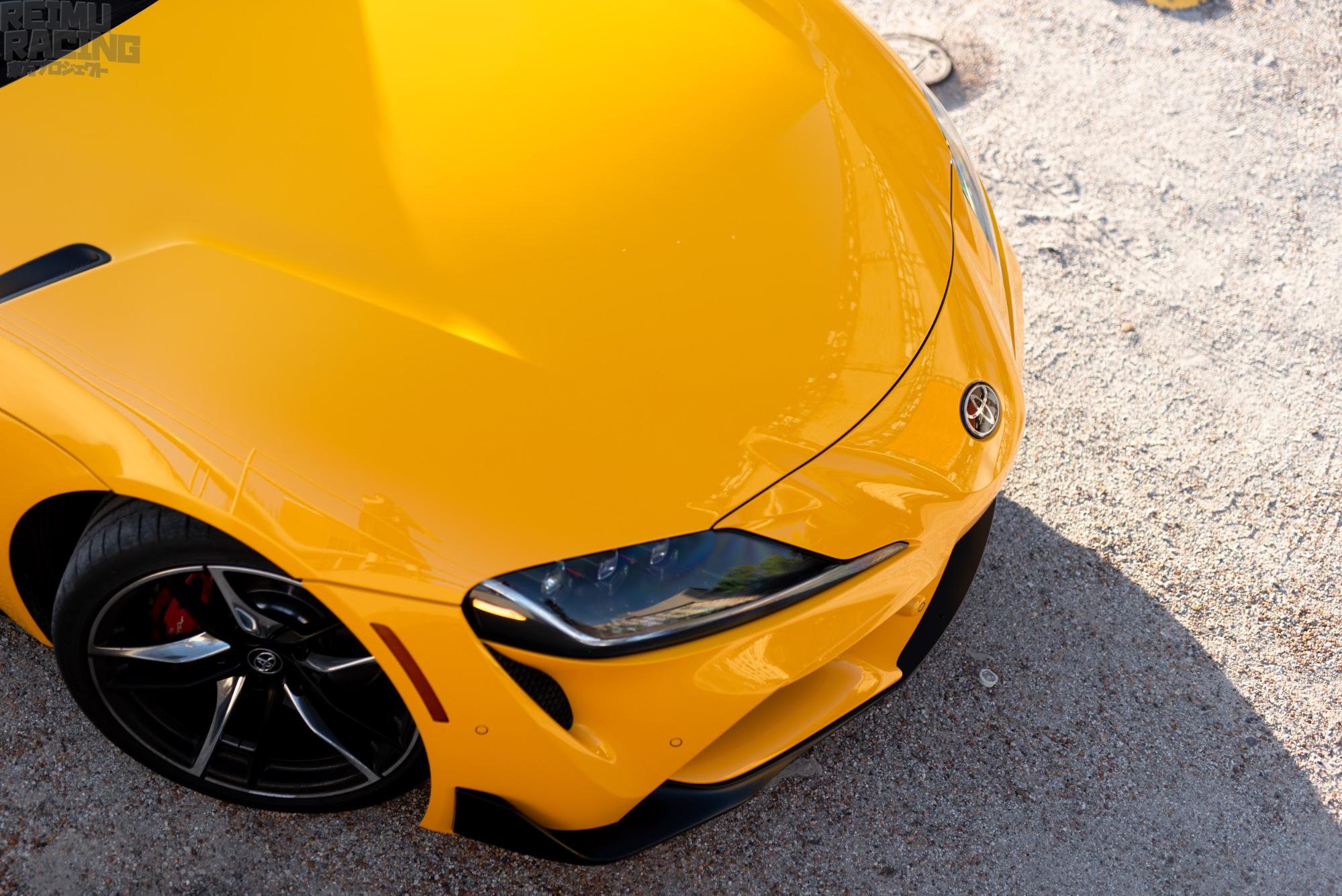 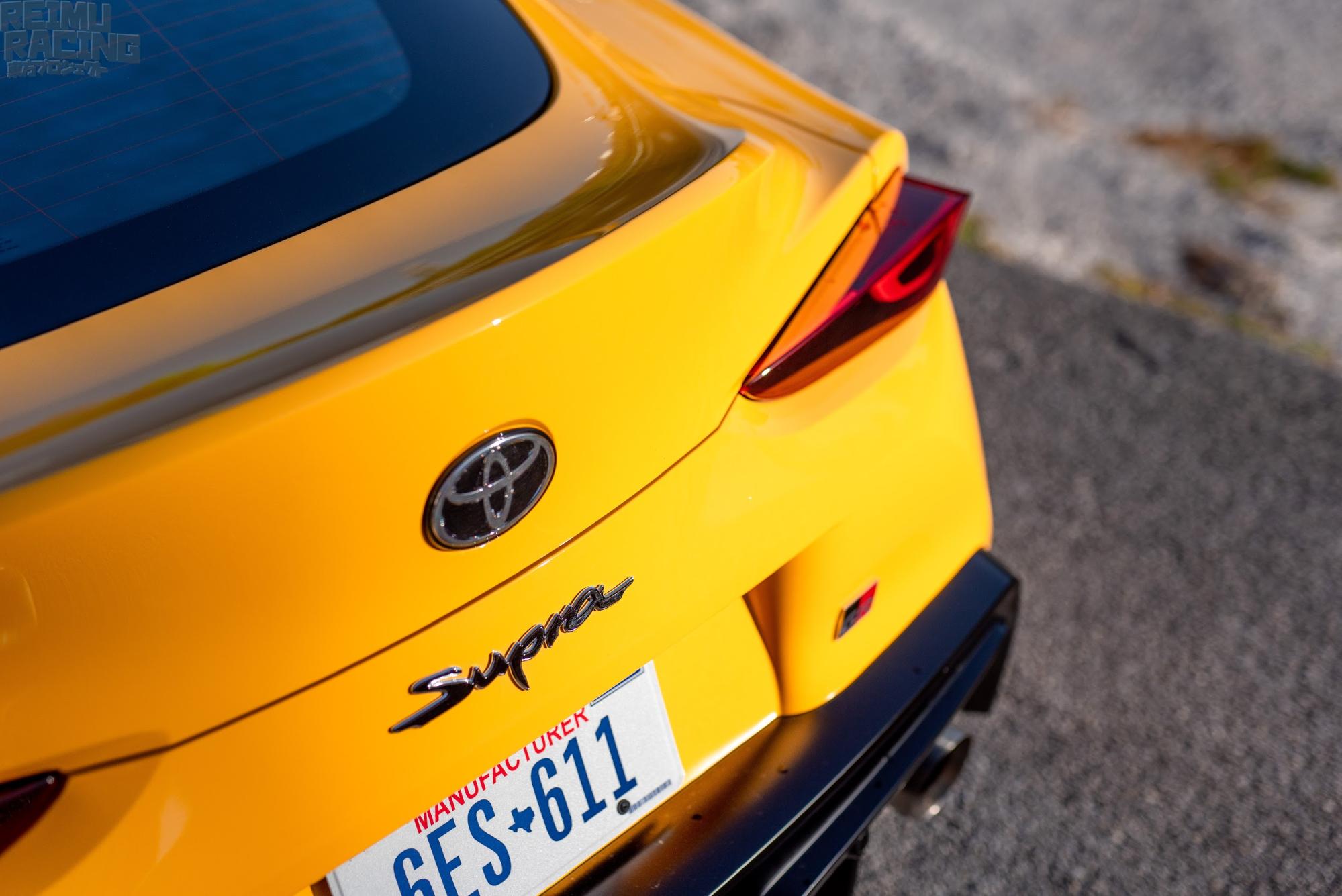 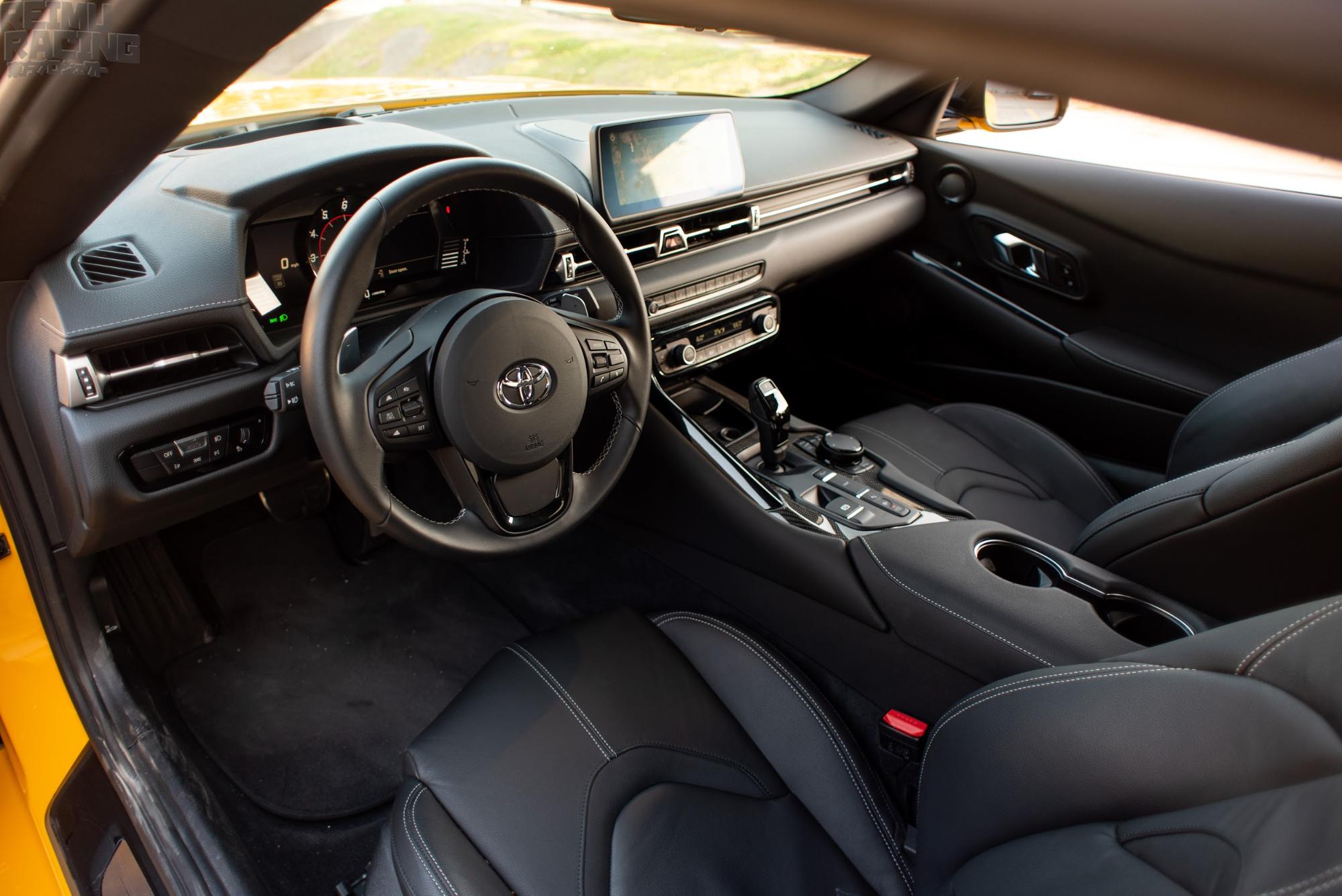 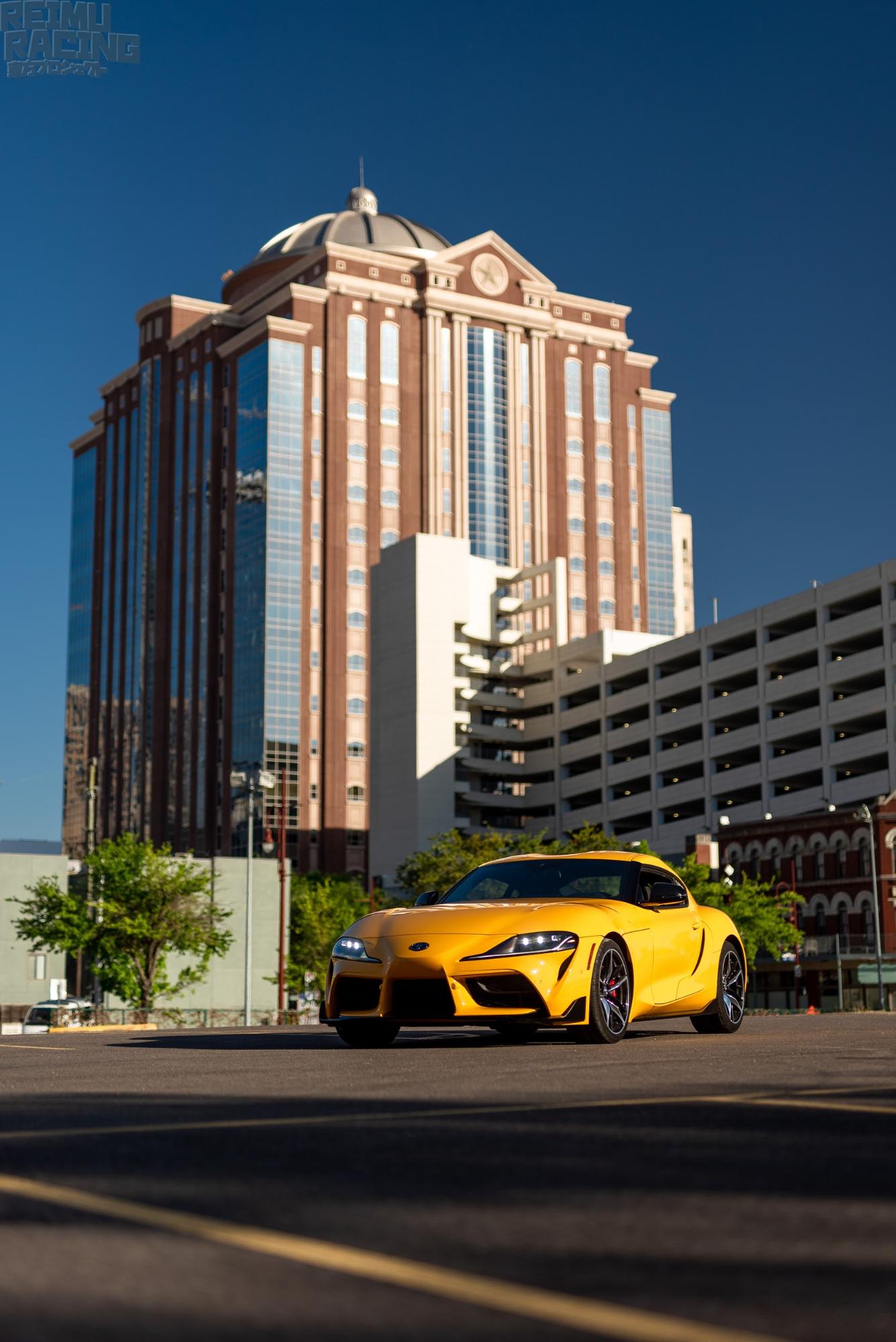 Putting it back to normal mode made it conservative and sluggish, racing through the eight speeds at the behest of what seemed like meeting fuel economy goals. I generally like automatic transmissions in traffic-choked Houston, but this felt awful. In this, I wished it had a manual just so I could tell it what I wanted because it clearly had no idea.

At this point, I had no choice but to rule the new Supra out as a sports car.

Back to touring, then. I slowed it down and hit the highway—with the windows up this time—thinking that I’d maybe swing out to Dallas and find out if the new Supra was a cruiser just like my old Supra was.

My MK3 had a sloppy steering feel and its R154 manual five-speed had all the feedback of a hockey stick in a box of rocks. However, from the day I bought it, the ‘88 ate highway mileage for breakfast, and the electronic suspension would comfortably carry me over roads that looked like the surface of the moon. That was what I was hoping for in this modern iteration.

Immediately, I could tell it wasn’t actually comfortable. My 30-year-old one was actually vastly plusher. The new Supra's seat bolstering was incredibly aggressive and the spring rates were stiff. The aforementioned massive tires were loud. The short wheelbase made it feel bouncy—almost unsettled, even—during casual driving on sweeping Houston overpasses.

The longer I sat in it, the more claustrophobic it felt. The stylishly humped roof, one of my favorite design features from the exterior, just felt like a divider between you and your passenger from the interior. The cockpit was narrow and the high beltline made the cramped feeling worse. The car had adequate head and legroom for my lanky frame in the same manner that a straitjacket in my size fits well.

At War With the Past

So, based on what I could tell, the new Supra is not meant to be taken touring, despite the fact it only comes in an automatic and with numbed steering. It didn’t feel like a sports car, either, for the exact same reasons I thought it would be a tourer. I got out of it wondering, "Who is this car for?"

Unlike Supras of yore, it's not a GT car with a powerful engine that can, when needed, take care of business in the corners. A Lexus RC F is probably a closer analogue today. The latest Supra feels explicitly designed to be a sports car, for track days and such—but it falls down in that department as well.

It felt like two separate teams developed the Supra, and they did not speak to each other once. 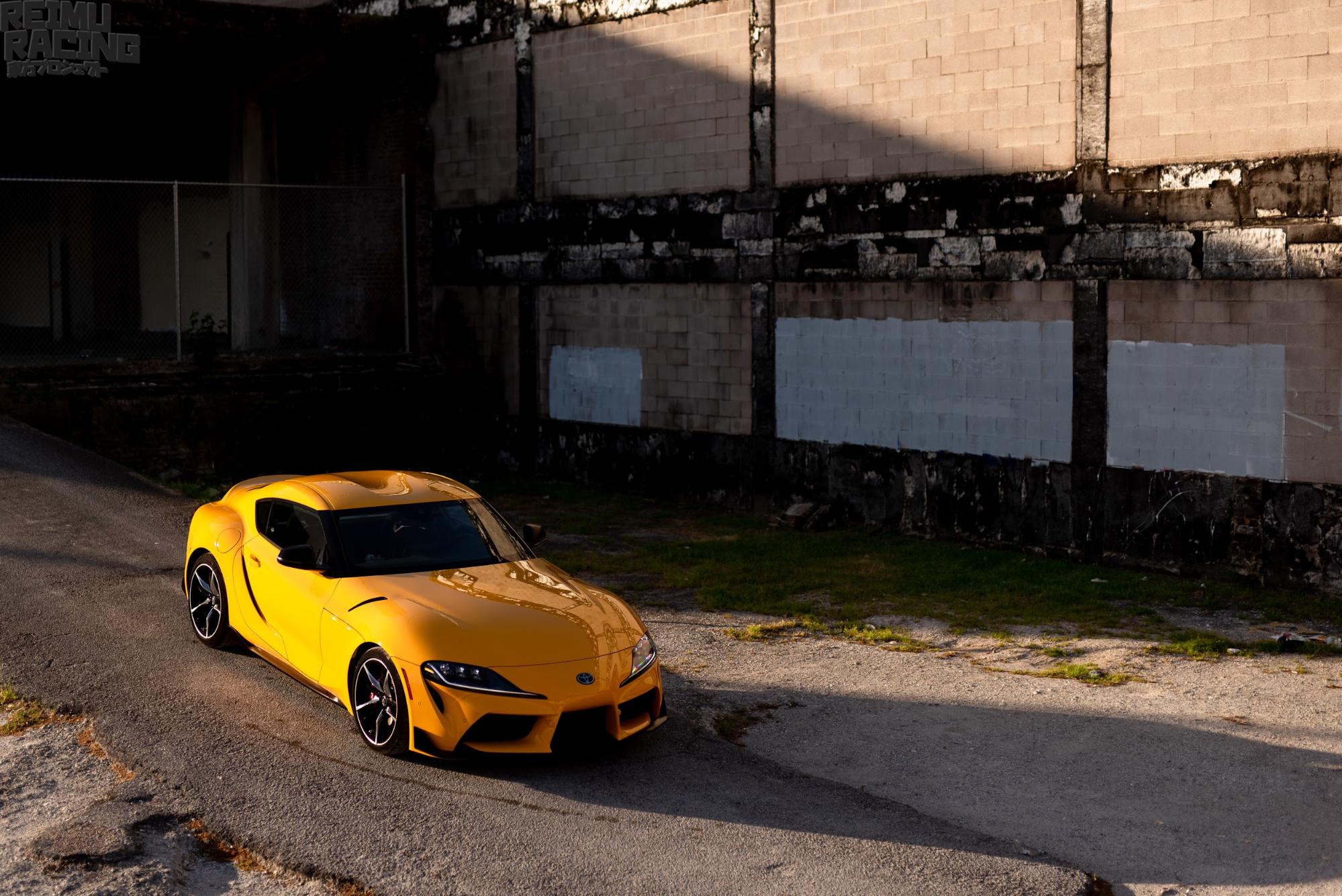 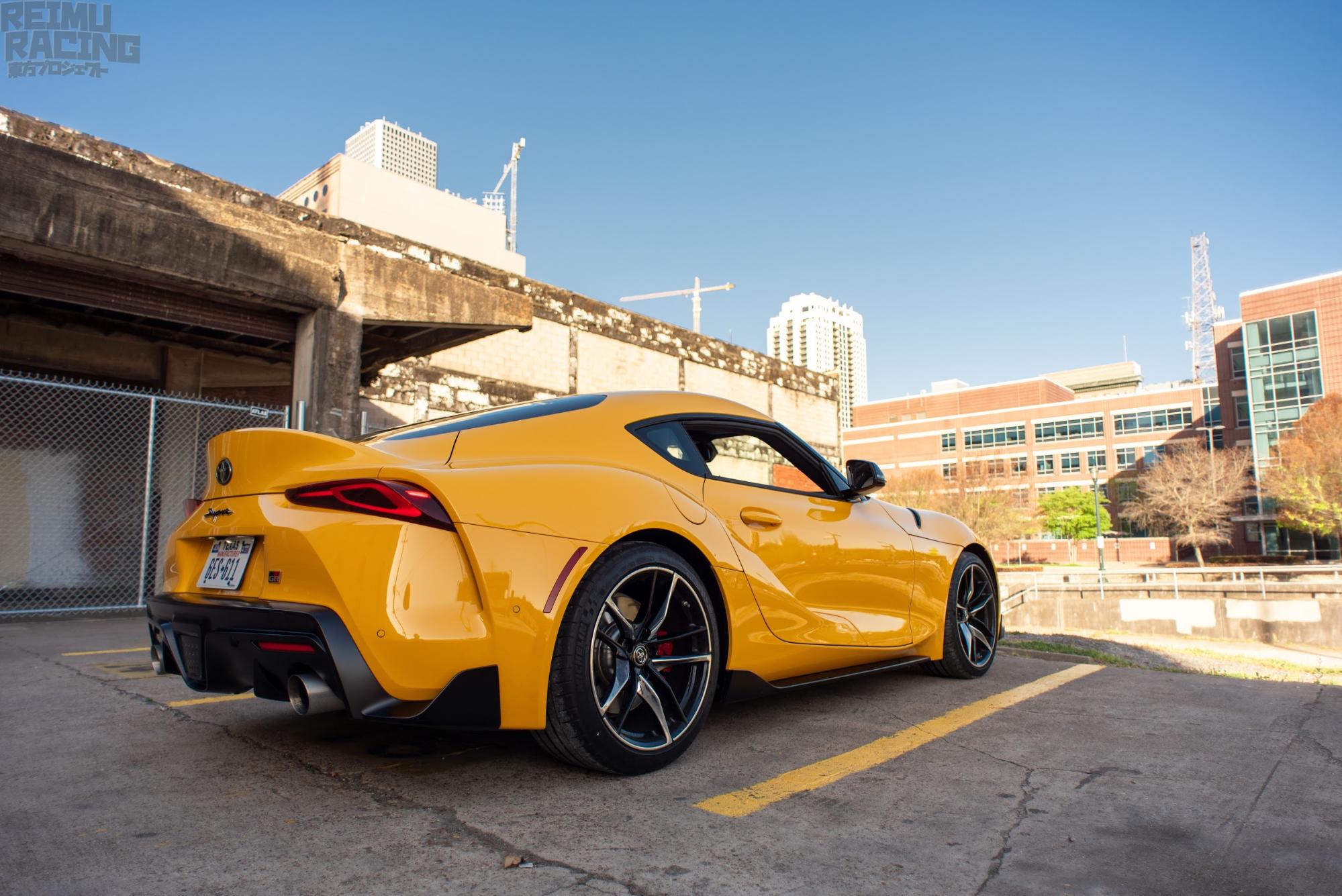 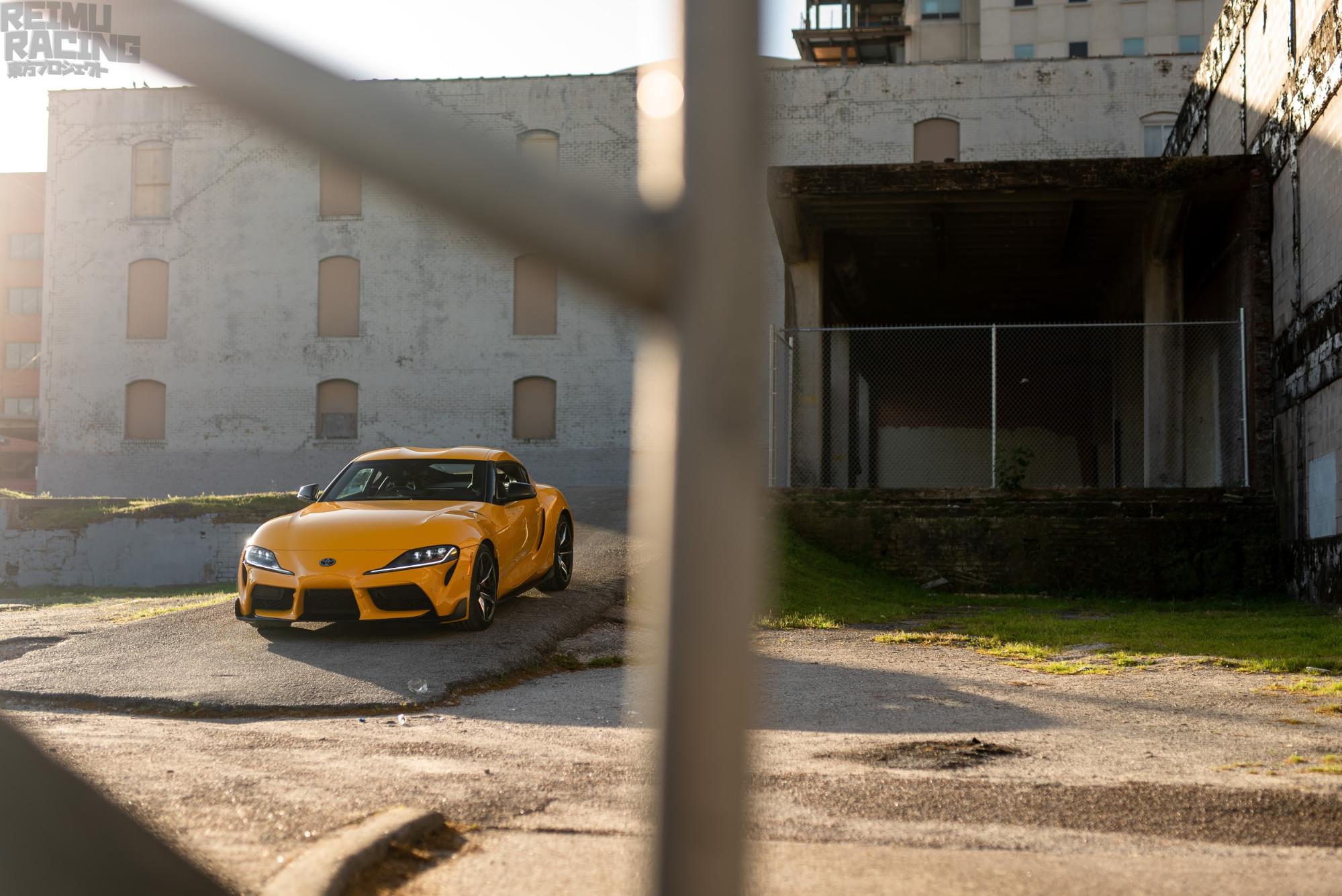 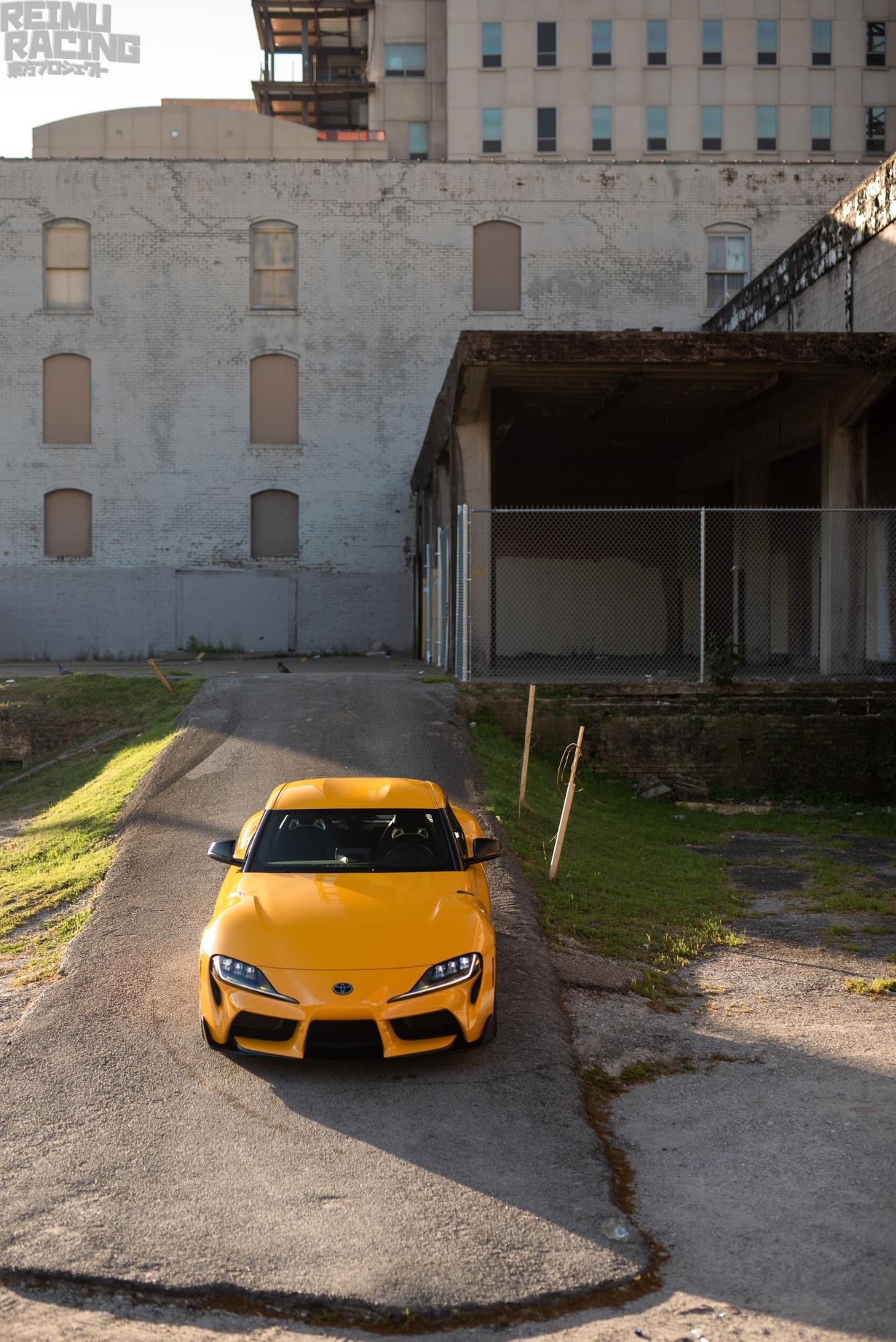 One team seemed to be made up of the 40-year veterans of the Toyota sports car design department, who wistfully recalled the days of putting a juiced-up M-series motor in a well-equipped Celica. That team built a grand-tourer. They gave it the supremely relaxed, normal transmission programming, the torquey yet smooth straight-six, and the stunning styling.

The other team appeared to be younger folks, raised on a cultural understanding of the Supra as Vin Diesel’s 10-second car and a TX2K monster. They tuned the suspension to a razor’s edge, gave it copious summer rubber on 19-inch wheels, and stitched in the most aggressive bucket seats this side of a Bride Low Max to hold you in through it all. Then, they threw it all into one car and sent it out the door seemingly without so much as taking it around the block with both windows down to see if it would deafen the driver who’d just dropped over $50,000 on their new creation.

And because it has no clarity of purpose, it’s a car at war with its own past. Every Supra I’ve ever driven—even ones pushing close to four-digit power at the rear wheels—still loved the highway. The first four generations of Supra are as enjoyable to drive to the track day as they are on the track itself. This new one is objectively unpleasant to cruise in. It’s trying so hard to be the car you thought it was when you first watched The Fast and the Furious 20 years ago, but it’s not and it never was.

The Supra ownership experience was meant to be that of comfort and poise, gliding over pavement gaps on Interstate 10 as you approached hill country for a day of spirited fun. The aftermarket handled the power and owners could add race-car attributes at their own discretion. Toyota has always made a comfortable, fast car that an owner could do with it what they saw fit. But the automaker seems to have succumbed to popular opinion and built a grand-tourer that doesn’t tour.

The culture surrounding the Supra finally seeped into its development, and it is worse for it.