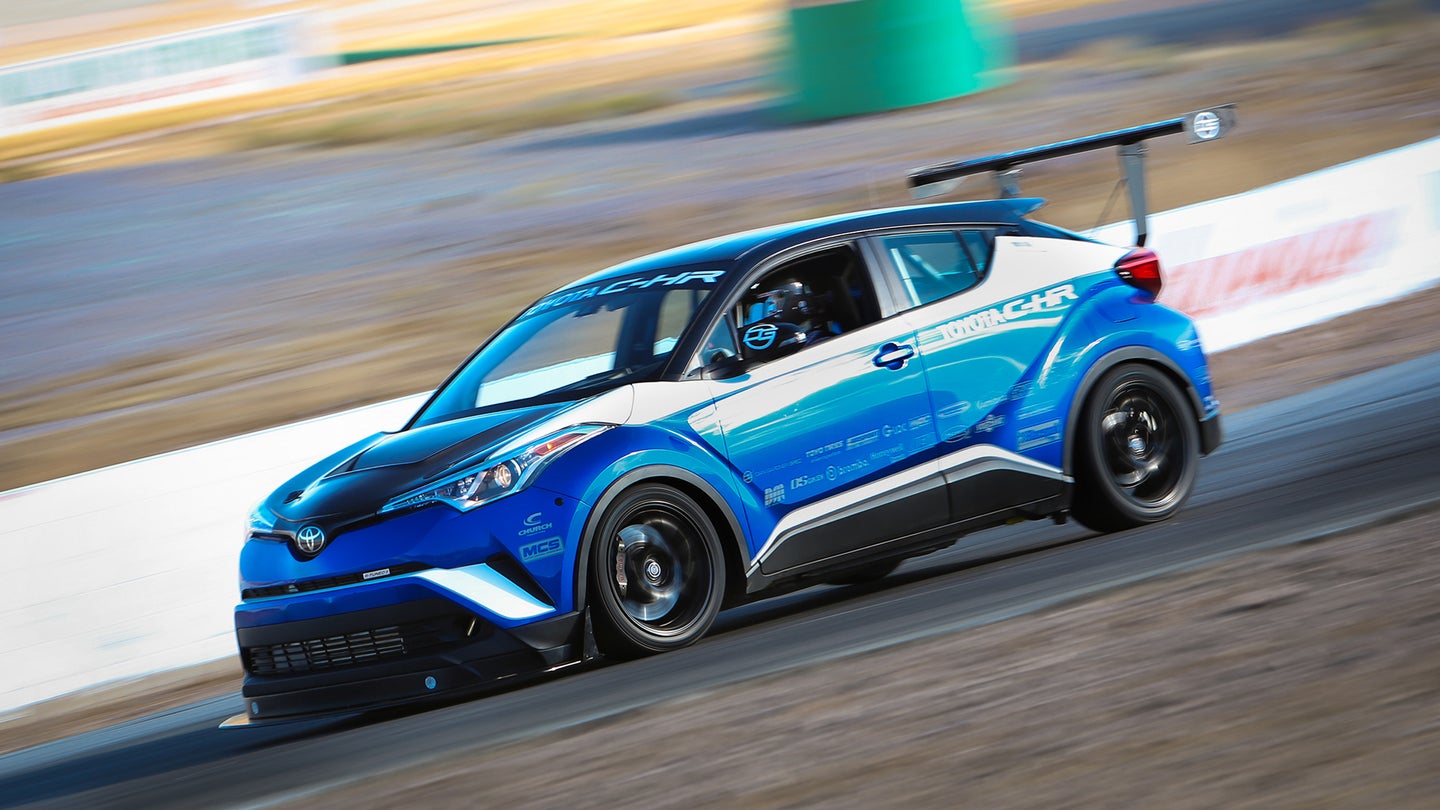 In the eternally-angry spirit of George Carlin, there are exactly seven words that you can never say on an automotive website without car enthusiasts turning away in disgust. And with “crossover” leading the list, how can manufacturers get people excited about the latest exurban millennial runabout? For Toyota and the C-HR, the answer is obvious: Turn one into an insane racecar with four times the normal amount of horsepower, and a mesa of a wing out back.

The Toyota C-HR is the Japanese automaker’s entry into the newly-lucrative “hatchbacks on stilts” market—in other words, it’s yet another subcompact crossover for people who need a smaller footprint, a bigger trunk, and the comforting affirmation that no gravel road will be too…gravelly...for their stylish and practical CUV. With a four-cylinder engine hooked up to a decidedly-blah continuously variable transmission and a rampaging 144 horses heading to the front wheels, it’s just about the least likely hot lapper you can conjure up.

But Toyota insists that chief engineer and racing enthusiast Hiroyuki Koba made it his mission to make sure the mini-CUV could maximize its performance potential. And aside from feeling like a weird Gran Turismo challenge level brought to life, taking a stock C-HR for a spin around the legendary Willow Springs Raceway in southern California shows that the company’s not totally blowing smoke here—and why tuner Dan Gardner decided to use it as a canvas to create the ultimate track toy. I’m not going to waste any pixels on convincing you that the C-HR is a Toyota Supra with a babysitting gig; the engine is peppy, but the CVT sucks all the fun out thanks to a throttle response that’s best described as epochal. Still, the car turns in with a sharp directness at speed that allows you to push things farther than you’d expect.

The extreme styling draws plenty of ire (not entirely undeserved, in this writer's opinion), but pushing the wheels out to the corners of the body is an undeniable plus for performance. It’s worth mentioning that the C-HR logged 150 laps on the Nurburgring during its development, which seemed apparent during a surprisingly-composed ride through the corners on the Streets of Willow course.

Just because a car nods to the existence of a famous racetrack doesn’t mean it’s worth driving on it, though, and that’s where Dan Gardner and the team at DG-Spec Racing come in. A former championship road racer, Gardner has partnered with Toyota over the years to give an unexpected punch to an array of vehicles, including a bonkers 300-horsepower Sienna minivan. He even helped test out the nutso 230-mph “Land Speed Cruiser” that set the record for the world’s fastest SUV last year. So when Toyota asked him to turn the C-HR into a track toy for last year’s SEMA show and handed over the keys to the company parts bin, Gardner had himself a time.

There are so many new and upgraded parts on the C-HR R-Tuned compared to the stock model—DG-Spec spent 10,000 man hours and a full year on the build—that it’s hard to know where to begin. Starting at the front, the team yanked out the old powertrain and stuffed in a 2.4-liter 2AZ-FE four-banger from the mid-2000s Toyota Camry. That workaday engine has been enhanced with a host of updated internal bits and a Garrett turbocharger system that jacks up the power specs to 600 horsepower and 550 pound-feet of torque on full boost.

Gone is the boggy CVT, replaced with a tight-shifting E-Series five-speed manual transmission from the Corolla XRS and not-so-dearly-departed Scion tC. But to get the econobox shifter to handle 600 horsepower, DG-spec stripped it down, upgraded the mechanicals inside, and added a transmission cooler. All the power still travels to the front wheels, but an adjustable limited-slip differential between the front wheels further improves handling and limits torque steer. The C-HR R-Tuned rides on a mix of updated Motion Control Suspension coilovers, Vogtland springs, and components from both the donor C-HR and, believe it or not, the Prius.

But the real story of the car—and how Dan Gardner was able to push it to a supercar-beating 1:25.22 lap on the famous Big Willow circuit—is its ludicrous amount of grip. The ankle-biting front splitter and titanic rear wing generate 400 pounds of downforce at 150 mph, which was enough to bend the center of spoiler, push the splitter into the pavement, and weaken the metal surrounding the wing’s mount on the hatch to the point of failure in early testing.

Despite a motley development that Mary Shelley would be proud of—to say nothing of the fact that it came out of SEMA, where half the display cars don’t even run—the Toyota C-HR R-Tuned is absolutely meant to be driven. That reality snapped into focus the second I slid behind the wheel and held my breath as one of Dan Gardner’s crew members cinched my six-point harness tight and double-checked my helmet strap while we sat idling in the windy pits at Big Willow.

After a brief reflection on humanity’s unceasing quest to ask Why not?, I motored down pit lane in second gear, listening to my instructor and ISMA WeatherTech SportsCar Championship driver Craig Stanton remind me that I now held our lives in my hack hands. Coming out of the stock models, it was weird to see the track framed through the exact same windshield while nearly every other part of the experience—from the light and notchy five-speed manual gearbox to way the car hunkered down at high speed thanks to all that downforce—was utterly foreign and entirely captivating. For two long laps, we rocketed around Big Willow, growing more impressed with the capabilities of the C-HR R-Tuned with each passing corner.

Helpfully (and hilariously, without the blessing of its Japanese rival), Toyota rented a Nissan GT-R for the day to provide some much-needed perspective. To be sure, there’s no confusing one of the most technically-brilliant supercars on the planet and a one-off concept in terms of fit and finish. The C-HR R-Tuned felt a tiny bit slower and less grippy than the GT-R, but then again, that might just be a trick of perception. After all, the numbers don’t lie: The R-Tuned can rocket from 0-60 mph in just 2.9 seconds and lap Big Willow in 1:25.22, which is faster than luminaries like the Dodge Viper ACR and the McLaren 650S.

In case you’re wondering, those figures absolutely weren’t set with a dope like me behind the wheel. That became apparent when Gardner offered to let me ride shotgun in the C-HR R-Tuned for a few wheel-to-wheel hot laps as he faced off against one of his drivers in the GT-R. As per The Drive's company policy on questionable ridealongs, I hopped in and held on.

After a brief warm-up lap, Gardner went all out and touched 140 mph on the front straight before cutting in on Turn 2’s sweeping right-hander and surprising our opponent with a high-speed, close-quarters inside pass. The sight of Gardner sawing at the steering wheel with the GT-R roaring away just feet off the starboard side is one that won’t soon be topped.

The elevated, off-camber transition between Turns 5 and 6 provided another moment of drama as Gardner hooked it through at the edge of control. Unfortunately, a weird burning smell began to fill the cabin as we pushed it to 150 mph on the back straight, and he elected to call it a day to diagnose the issue. Not bad for a concept car that had spent an entire day doing hot laps around a dusty racetrack in the middle of the desert.

So what’s the point of all this? Obviously, Toyota didn’t hand DG-Spec a blank check for this build with the expectation that something like the R-Tuned will someday be sold alongside base-model Corollas in showrooms. There are no plans to bring anything resembling this concept to production, though we have a feeling that Toyota’s engineers and bean counters have taken a few notes as they watch the burgeoning “fast crossover” category continue to grow. An exercise like this is just Toyota letting their freak flag fly a little bit, purely for the enjoyment of everyone else.

But I walked away from the experience thinking about another potential end game—a spec crossover racing series of the future that could replace both NASCAR and the various touring car championship series that are withering on the vine around the world. It’s been a long time since the phrase “win on Sunday, sell on Monday” held any meaning whatsoever, but a series based on real mini-utes could be just the thing to get regular people buzzing about a family crossover. At the very least, it would do a small part in getting the word off the no-no list of enthusiasts everywhere.