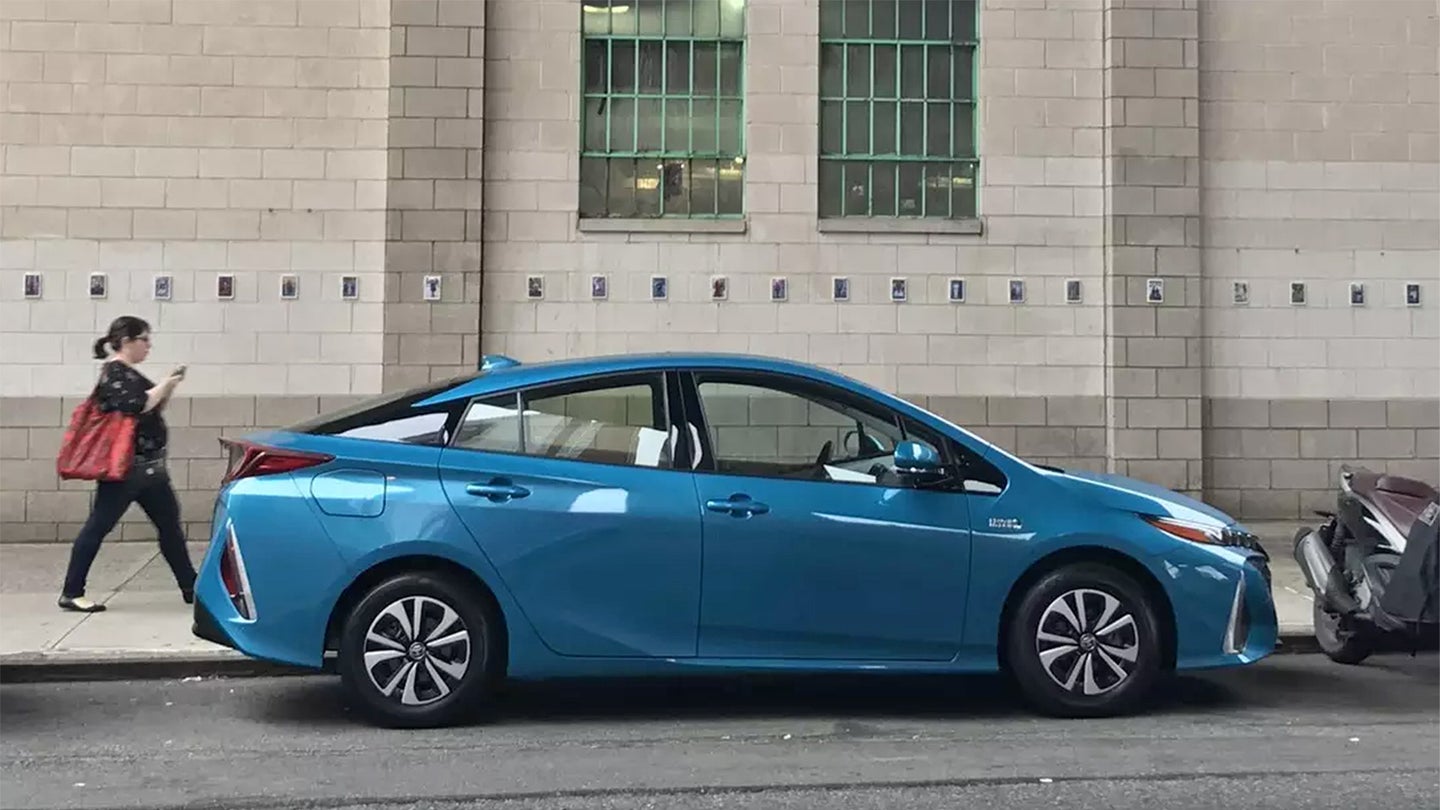 Welcome to Critic's Notebook, a quick and off-the-cuff car review consisting of impressions, jottings, and marginalia regarding whatever The Drive writers happen to be driving. Today's edition: the 2018 Toyota Prius Prime.

WHAT: Toyota's larger, plug-in version of its ever-expanding Prius lineup, with a four-cylinder gas engine, electric motors, and a bigger battery than the standard Prius. The Prius Prime will run up to 25 miles in electric-only mode.

WHERE: NYC to small-town Massachusetts, mostly on highways, plus around-town driving in both directions

WHEN: Winter (temperatures ranging between low-40s to below freezing, no snow)

Before the Great Self-Driving Car Panic and the five-weeks-after-a-bunny-orgy proliferation of crossovers, the Toyota Prius was the Thing That Killed Driving. That poor car ate shit for years: It ate shit from driving enthusiasts for its flaccid handling, ate shit from the Detroit loyalists for its twee foreign styling, and ate shit from various culture warrior-trolls for being a high-tech, eco-friendly darling of the liberal Hollywood elite. But for all the shit the Toyota Prius had to eat, it still managed to effectively define the hybrid car for a generation, it still became a sales juggernaut justifying its own product line, it's still around some two decades later, and it still drives like a half-full sponge.

But if you experience the Prius in its ideal environment—which includes a congested, low-speed urban hellscape like New York City, where I live—you realize that the last part doesn't matter: The Toyota Prius is a phenomenal city car, with efficient packaging, lots of visibility, and enough down-low electrified punch to triumphantly screw over some other schmuck by getting the jump on him in bumper-to-bumper traffic, which is the most important feature of any city car.

I started this write-up by noting that the Prius is a phenomenal city car, and that's true. Is it as lustworthy an urban vehicle as, say, the Volkswagen GTI? No—that car is a legit, hard-driving enthusiast machine, and more grown-up inside as well. But the Prius Prime is peppy enough for traffic jousting, is easy to park, will require few fill-ups, can haul a few friends and a week's worth of groceries, and—as important as anything—is a comfortable, spacious, and pleasing place to spend time. Plus, unlike the GTI, I really just wouldn't care what happened to this Prius. Dings, bumps, scrapes, the odd half-gallon of bird shit? Who cares? It's a wonderful and unsentimental tool—and at $27,995 to start, it's a cheap tool at that.

The Prius was built as an efficient, high-tech, comfortable commuter tool that thrives in congested urban environments. It's not so high-tech anymore, but it still ticks the other boxes for a couple thousand bucks under $30K. If you want driving personality, go elsewhere. If you want a reliable city car that you won't have to think much about—including at the pump—the Prius Prime should truly be considered great. As long as there's a recharging station handy.

2018 Toyota Prius Prime, By The Numbers

Things I'd Rather Interact With Than That Gear Selector: Alligators, ex-girlfriends, that weird scum on your tongue after a night of hard drinking.

One way to make the Prius even more efficient.