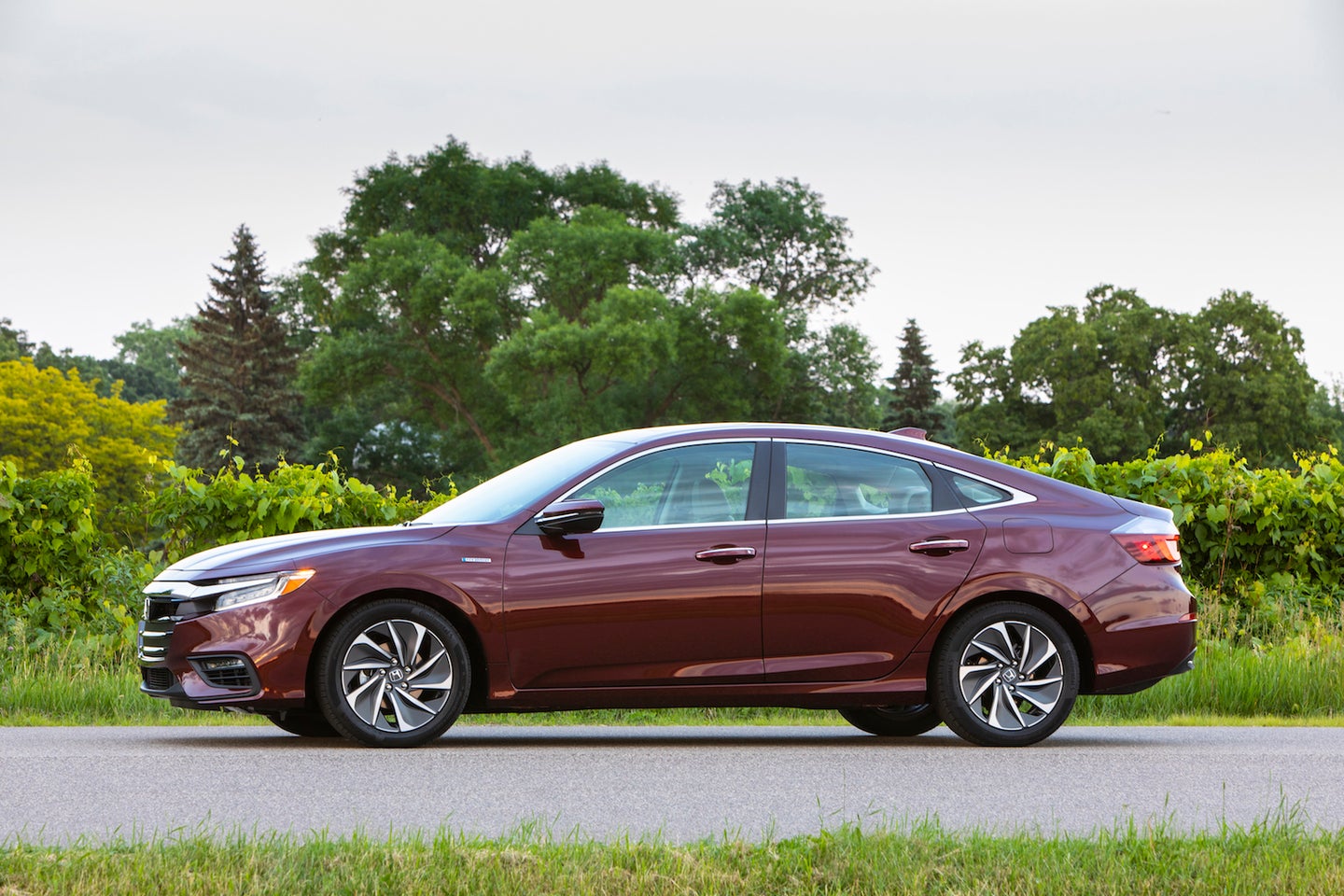 Being a first mover in technology is no guarantee of success, as Honda learned back in 1999. That year's Honda Insight was America’s first gas-electric hybrid, and its 70-mpg highway rating made it the nation’s mileage champ for seven years running. (That Insight also sparked a question—so where do you plug it in?—that, in less tech-savvy quarters, is still being asked today.) Despite its record efficiency, the capsule-shaped, two-door Insight never rose above novelty status. Instead, Americans fell hard for the Toyota Prius, the more-practical hybrid that followed the Honda to showrooms by mere months. Ever since, Toyota and its Prius have utterly dominated the hybrid market, in both sales and headspace. Honda, for no lack of trying, has yet to deliver a hybrid that’s captured the public’s attention—or its dollars—in the same way.

The new 2019 Honda Insight, if Americans are paying any attention, could and should be the hybrid that changes all that. In EX and LX trim levels, this Insight matches the Prius’s 52-mpg combined fuel-economy rating, and it kicks the Toyota’s bulbous butt in nearly every other key metric. This third-generation Insight finds Honda pursuing a new hybrid course: Instead of the mega-mileage or econobox pricing that characterized the first- and second-generation Insights—at great cost to style, performance, and desirability—this all-new version is a thoroughly upscale compact sedan that just happens to deliver 55/49 mpg in city and highway (versus 54/50 mpg for the Prius). The top-rank Touring edition earns a still-impressive 51/45 mpg, due to larger 17-inch wheels and additional features that ding its EPA rating.

The appeal begins with styling. Saying the Honda looks better than a Prius sounds like the most left-handed of compliments. So try this: The Insight is a handsome, contemporary sedan by any yardstick. There’s a tasteful rise-and-fall to its silhouette, and it’s less angular than the Civic sedan on which it’s based. The Honda also avoids the gratuitous over-styling that afflicts so many current Japanese designs, including Honda’s own Civic hatchback. There’s even a bit of the Audi Sportback in the Insight’s extruded tail, despite a conventional trunk instead of the Audi’s integrated hatch.

In that vein, the Honda looks substantial, and creates a great illusion of length: I swore this sedan was a midsize when I first walked up to it, and that effect didn't diminish over time. Yet it's actually just 1.3 inches longer than a Civic, on the same 106.3-inch wheelbase. The blunt “flying wing” grille, bequeathed from the larger Accord, actually seems the most indifferent design element.

The Insight then benefits from the Civic’s all-encompassing chassis goodness, including its MacPherson strut front and multi-link rear suspension. The hybrid gains an aluminum hood; additional sound deadening from stem-to-stern, including the engine bay and firewall; and for the Touring edition, liquid-filled suspension bushings front and rear. And the first thing you notice when driving the Insight is how incredibly hushed it is—especially when it’s running on battery power alone, or when the gas engine is steadily generating electricity in the “series hybrid” fashion of a Chevy Volt. That effort includes active noise control that uses the audio system to quell unwanted frequencies. Honda, in fact, claims lowest-in-class levels of interior noise, even versus the plug-in Volt.

The Civic’s floorpan is revised to help package the tiny, 1.1-kilowatt-hour lithium-ion battery, with no sacrifice in either passenger or cargo space versus a conventional Civic. The 12-volt starter battery moves beneath the center tunnel to clear underhood space for the hybrid powertrain.

The premium theme continues inside, where the Insight feels nearly as inviting as the pricier Accord. As with that benchmark sedan—or the Acura RDX I recently tested—there’s newfound warmth inside. Evident attention has been paid to the layout, textures and details, including well-tailored seats and genuine stitching on the dashboard. It’s all a welcome change from some Hondas whose monochrome seas of gray or black recalled Sony consumer electronics.

I’m starting to make peace with Honda’s pushbutton electronic gear selector, though the console buttons still aren’t ideal. Eliminating the shift lever does free up space on the console, which includes a detachable, rubber tray that perfectly fits the latest iPhone 8 or Samsung Galaxy.

The Android-based infotainment system, first seen on the latest Odyssey minivan, puts smartphone-style apps and operation on a visually-coherent 8.0-inch touchscreen. Android Auto and Apple CarPlay are aboard, and the system allows over-the-air updates. It’s another welcome advance for a brand whose interfaces had become some of the industry’s most aggressively annoying and unintuitive. The back seat feels roomy enough for three adults in a pinch, though the Touring edition’s moonroof hogs some headroom. And folding backrests are split 60/40 to help stow longer items.

The Honda underlines its power-and-performance advantage over the Prius or Hyundai Ioniq hybrid with its finely engineered two-motor hybrid system; here using a 1.5-liter, four-cylinder engine versus the Accord Hybrid’s 2.0-liter unit. Honda claims a thrifty thermal efficiency level of 40.5 percent for the Atkinson-cycle engine, along with the industry’s first permanent-magnet drive motors that contain no heavy rare-earth metals. The gasoline engine makes just 107 horsepower and 99 pound-feet of torque, but that’s supplemented with a powerful electric traction motor with 129 horses and 197 pound-feet that’s geared to the front-axle differential. The second electric motor, slaved to the engine, operates as a starter and generator. And there’s no transmission per se, no torque convertor, and no pulleys or chains, as in a continuously-variable transmission. Clever, clever stuff.

Combined, the system generates a maximum 151 horsepower and 197 pound-feet, or 25 percent more ponies than the Prius's 121 horses. The peppy-feeling Insight should manage 0-60 mph in right around 8.0 seconds, versus more than 10 molasses-dripping seconds for the Prius and about nine seconds for the Ioniq.

But it’s the driving experience, not just the acceleration, that separates the Honda from its hybrid competition. First, the electric-assisted steering feels like a regular Civic’s: light, yet precise and responsive. Calling the handling “sporty” is a stretch, but the Insight is never less than pleasant to drive. That’s in stark comparison with a Prius, whose lifeless handling and couch-potato powertrain make me want to kick in its homely fenders every time I drive one.

The Honda operates in three distinct modes, in addition to driver-selectable Eco, Comfort, and Sport settings. Roll away from a stoplight, cruise at roughly 20 mph or below, or decelerate, and the Insight operates in all-electric fashion. The engine decouples from the drivetrain to reduce friction and energy losses. In normal road driving, series-hybrid operation dominates the proceedings: The electric traction motor powers front wheels, while the gas engine runs almost imperceptibly to generate electric power for the motor or to charge the battery. But just like a Volt, the Honda can also run as a parallel hybrid. A mechanical clutch connects the engine directly to front wheels, supplementing the electric motor during heavy accelerative loads or at highway speeds. It’s only during heavy throttle applications that the Insight gets a mite bumptious; its engine holding high revs to generate maximum force, and emitting the urgent, telltale rasp of a tiny four-banger. If you don’t feel like hearing it, simply avoid pushing the accelerator beyond the 75-percent point of its travel, where Honda has placed a  “click” detent that you feel through the pedal.

Yet in this type of car, where you’re driving for mileage, peace, and comfort—certainly not stoplight races—you’d be surprised how rarely you need to mat the gas to summon max speed. I drove the Insight for hours without the fossil-fuel engine rousing itself much, purring at roughly 1,500 rpm only to generate electricity. The system works in transparent fashion, with almost none of the boggy throttle response or non-linear acceleration that make some hybrids a literal drag. And the mileage was as as-advertised, if not better: In city and suburban driving, I saw as much as 55 mpg, and had no trouble keeping the Honda above 50 mpg. My highway mileage hovered around 47 mpg, two better than the EPA rating. And I ended up with 49 mpg overall. That’s tremendous mileage for a car with this combination of style, space, features, and capable performance.

The hybrid brake pedal feels linear and confident as well, with a seamless transition between its regenerative and mechanical stoppers. But Honda’s fussy, illogical approach to regenerative braking is a lost opportunity. Here, the Chevy Volt has the better idea, using steering wheel paddles as virtual handbrakes that boost fun and efficiency alike. The Insight, instead, uses its steering-wheel paddles to either raise or lower the level of regenerative braking, and the system defaults to the lowest level every time you come to a stop. In other words, to max out the Honda’s energy recapture from braking, you have to twiddle the paddles—and look down to the driver’s display to make sure you’ve reached the right level—every freaking time you stop. The Honda cries out for a set-and-forget regen level, and I expect that customers will cry out for one as well. And even the strongest level doesn’t approximate the “one-pedal” operation of EVs, where drivers can decelerate and stop without using the brake pedal at all.

What the Insight won’t do, at least not for long, is to run entirely on battery-generated juice, the way a plug-in hybrid like the Volt can manage 53 miles without using a drop of gasoline. In the best suburban conditions, after switching the Insight into EV mode, I managed just eight-tenths of a mile before the gas engine sparked back to life. But remember, that gas engine mostly stays sidelined every time you coast, decelerate, or roll from a standing start, which is quite often in around-town driving. And the Honda’s relatively tiny lithium-ion battery helps deliver a more-affordable price: $23,795 for the Insight LX, or about $600 less than the most-affordable Prius One. That rises to $24,955 for the better-equipped EX. The Chevy Volt starts from $34,095 and can top $40,000, though an available federal tax credit drops the base model as low as $26,595. The Honda, I should mention, is more deluxe and roomy than the Volt, including a midsize-worthy 15.1-cubic-foot trunk (14.7 in the Touring) that compares to just 10.6 cubes in the Chevy.

Even my loaded Insight Touring edition came in at $28,985. That undercuts a comparably-equipped Prius 4 Touring by about $4,000, and that's a lot of money in this penny-wise segment. The Insight feels richer and better-finished than even that loaded Prius, including the Touring's leather seats that can't be had in the Prius at any price. And as noted, the Honda looks and drives decisively better than the Toyota, crushes its power and acceleration, and matches its fuel efficiency.

Bottom line? If there’s a better under-$30,000 hybrid on the market, I haven’t driven it. Now, perhaps you’re a sorely used Volkswagen diesel fan, or maybe a serial Prius owner. But whoever you are, if affordable fuel efficiency is a top priority, I’d urge you to put this Insight on your list, schedule a test drive, and judge for yourself. In healthful, hybrid-shopping terms, to do otherwise would be like going to the supermarket and forgetting the soy milk.