Finding paradise in a Goldilocks 'Vette. 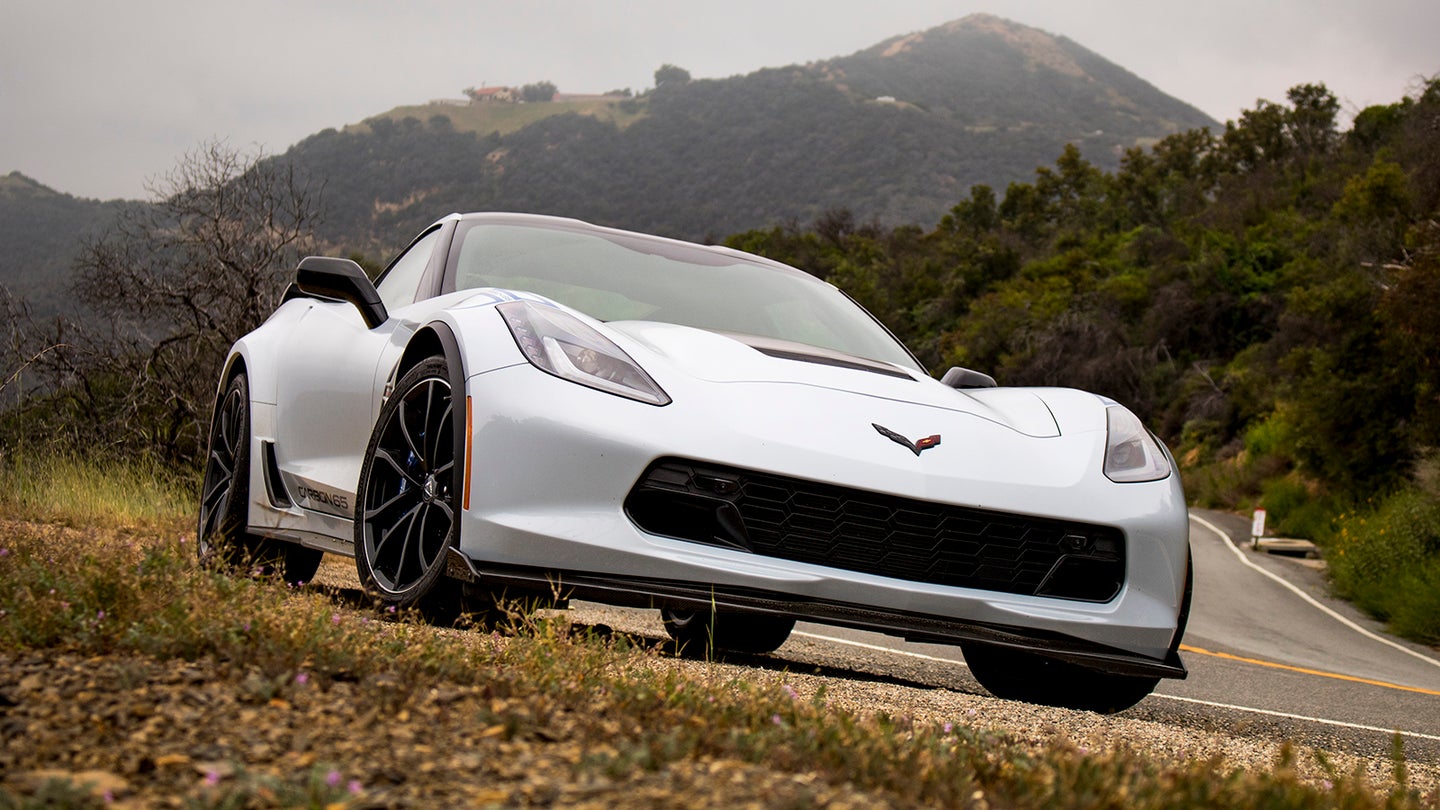 These are heady times for American performance cars. Here's a Chevrolet Camaro that beat the Ferrari 488 GTB around the famous Nurburgring; there's a Dodge Challenger that's the quickest 0 to 60 mile-per-hour production vehicle on the planet; everywhere, there are more high-horsepower V8 engines than you can shake a piston at. But whither the car that started the current version of the American sports car tradition decades ago: the Chevy Corvette?

Unless you've been blind to the automotive world for the last six months, you already know that the 755-horsepower, race-ready Chevrolet Corvette ZR1 promises to send out the car's current generation with a thunderous bang before a mid-engined eighth-gen version arrives. Yet Chevy also marks another milestone this year: The iconic Corvette turns 65 in 2018, having started out with a hand-built run of 300 Polo White convertibles all the way back in 1953. My, how times have changed.

And from where I'm sitting—the driver's seat of a 2018 Corvette Grand Sport Carbon 65—this middle-ground model is the real star of the show. We at The Drive have talked before about how the Grand Sport sits in a sweet spot between the entry-level Stingray coupe and the track-smashing, 650-horsepower Z06. Combine the former's potent 460-horsepower LT1 V8 with the advanced suspension and aero work of the latter, and you get a Corvette that's perhaps the purest sports car experience that General Motors can offer. 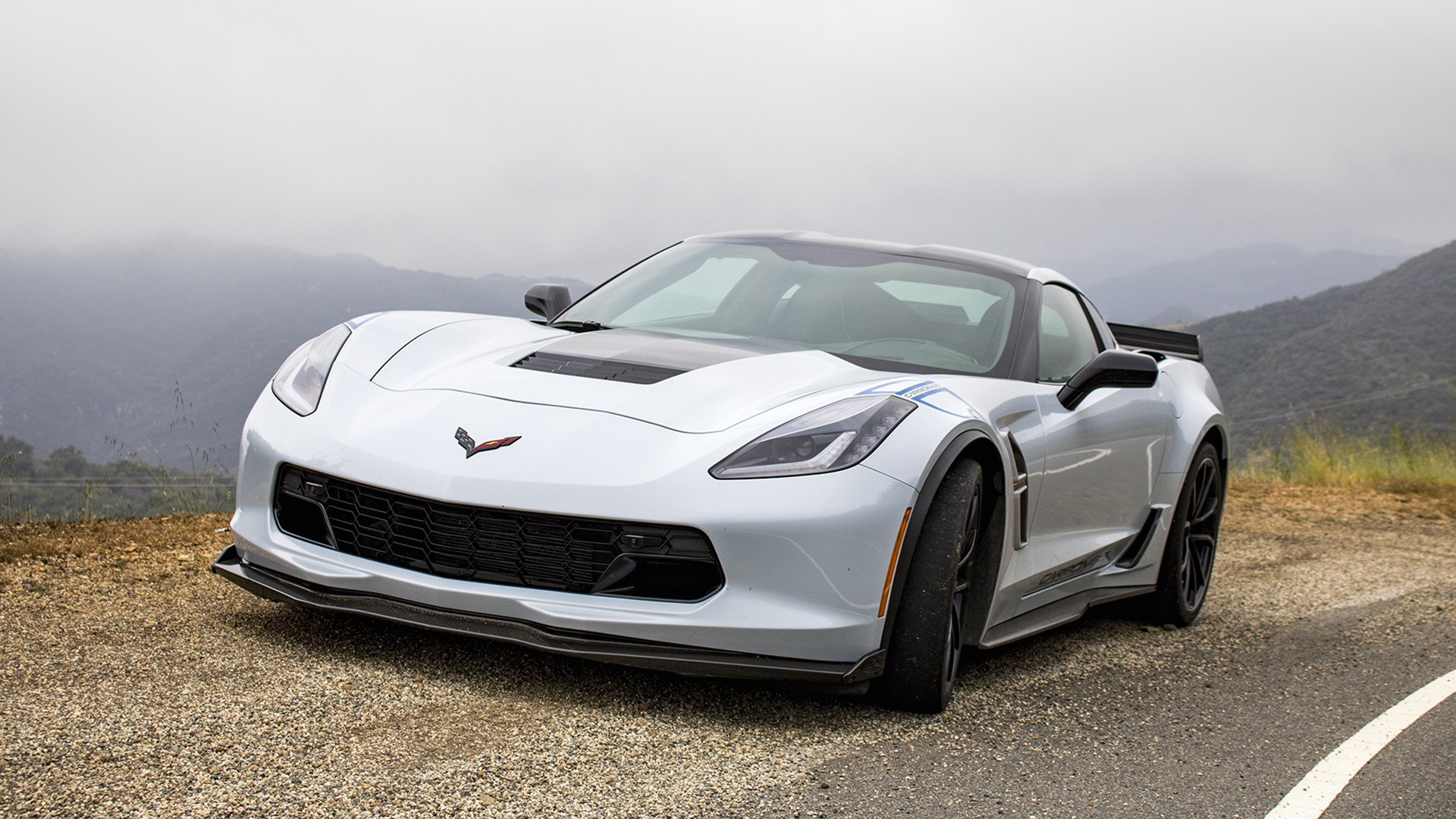 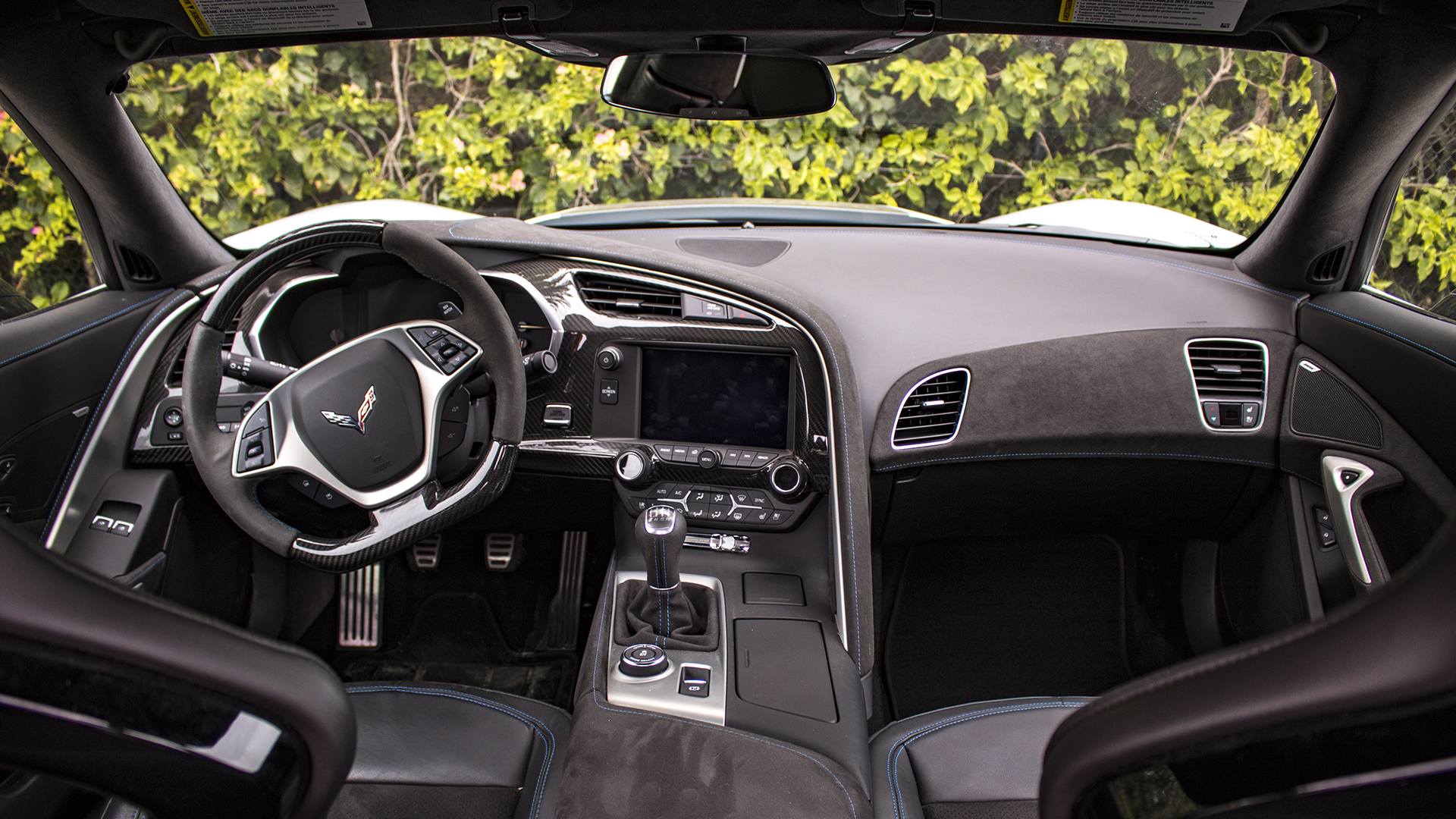 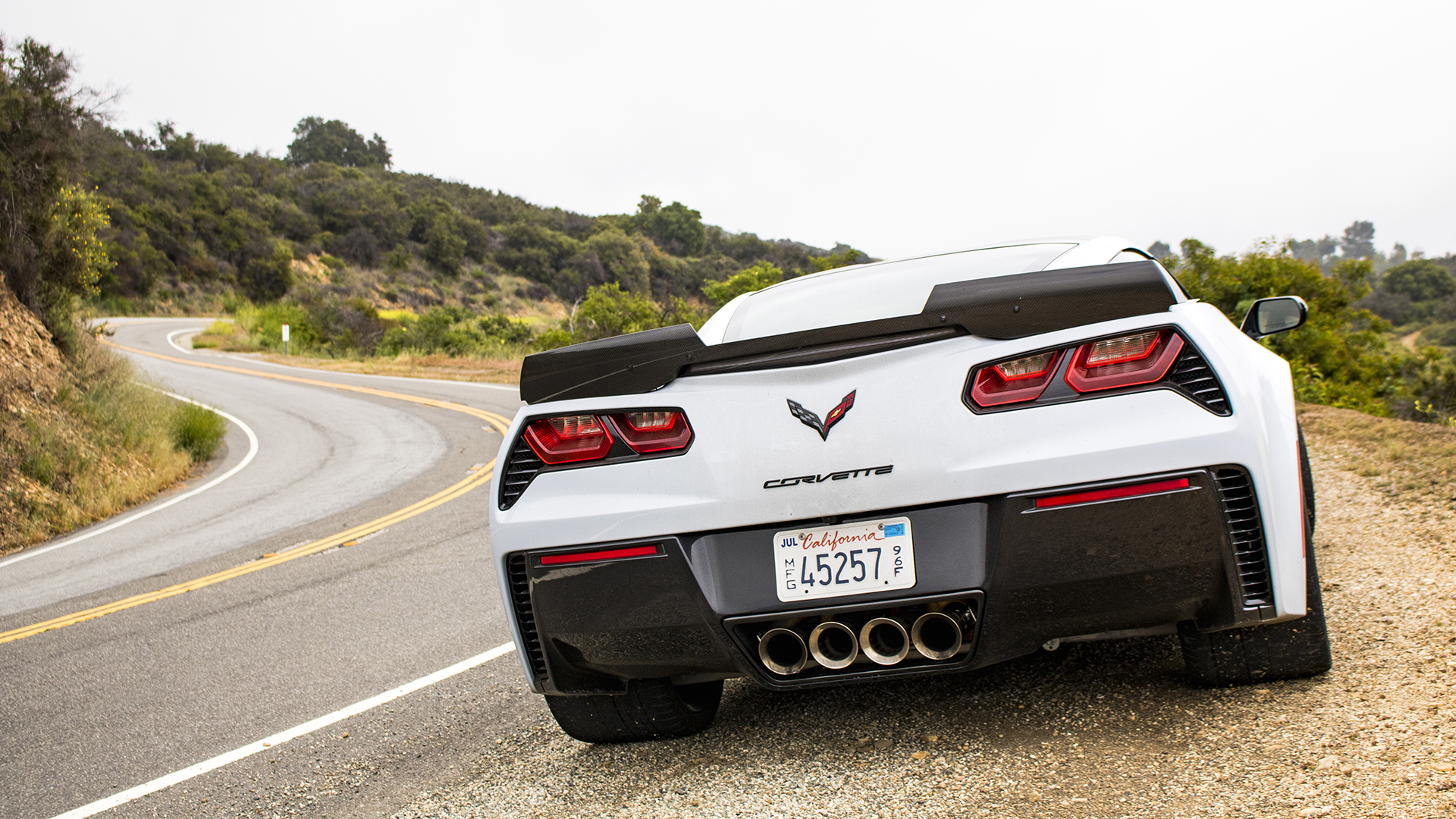 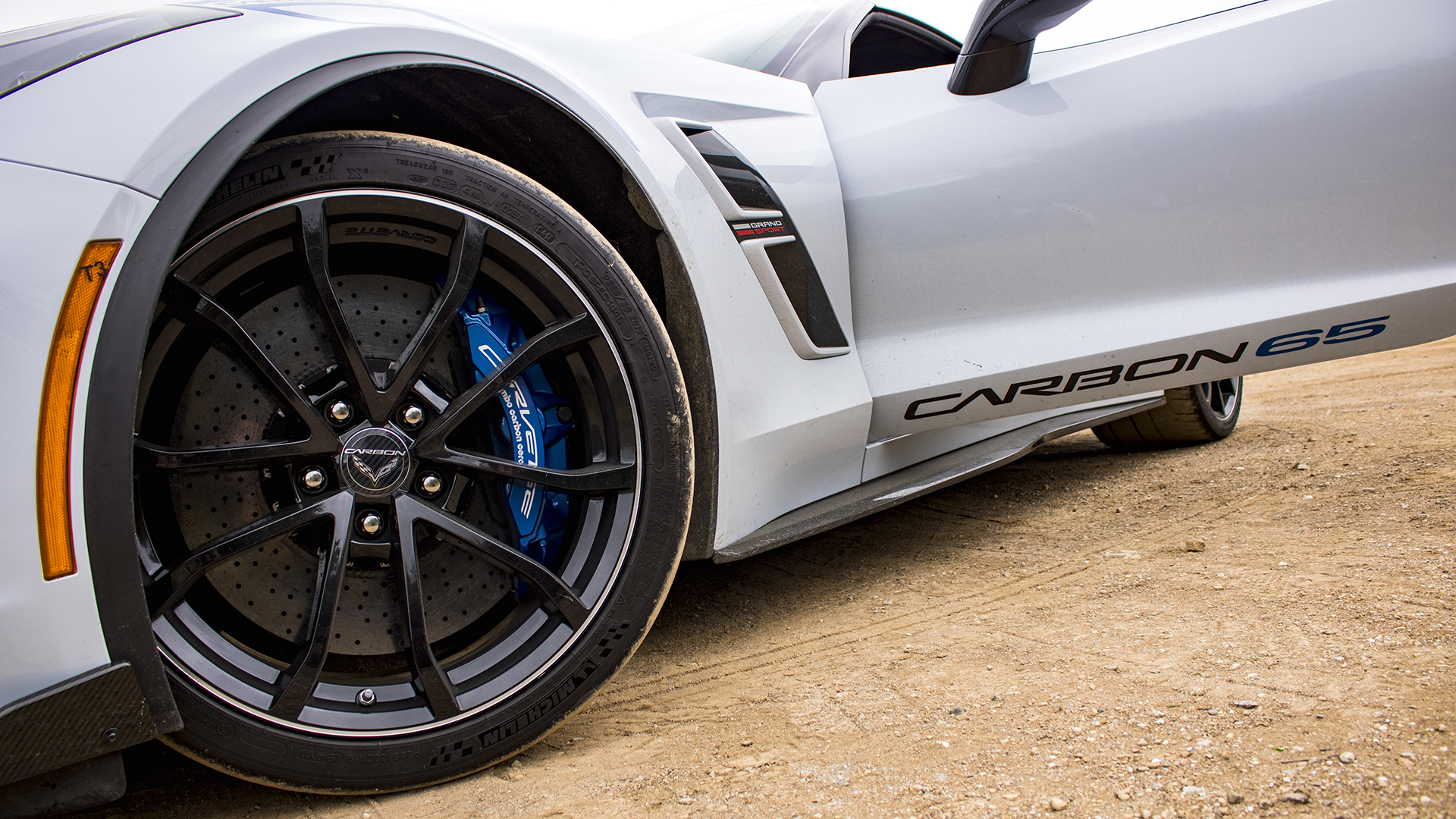 A tight bit of scheduling meant I had only 48 hours to sample this $100,000 special edition, all while Southern California decided to swap its famous sunshine for a stretch of rain and fog. But no matter—the Carbon 65 and I found motoring heaven, up there in the clouds.

It helps to start with great bones. The current-generation (C7) Corvette has been around since 2013 and it's aging like a...well, if not a fine wine, then definitely a prime steak. Its design seems to have permanently swapped the cartoony flourishes of the past with something sharper, more angular, and more sinister, especially in hard-top configuration. (I will never tire of four-abreast quad pipes.) Brutal beauty is a tough act to nail, and the Vette straddles that line with aplomb. 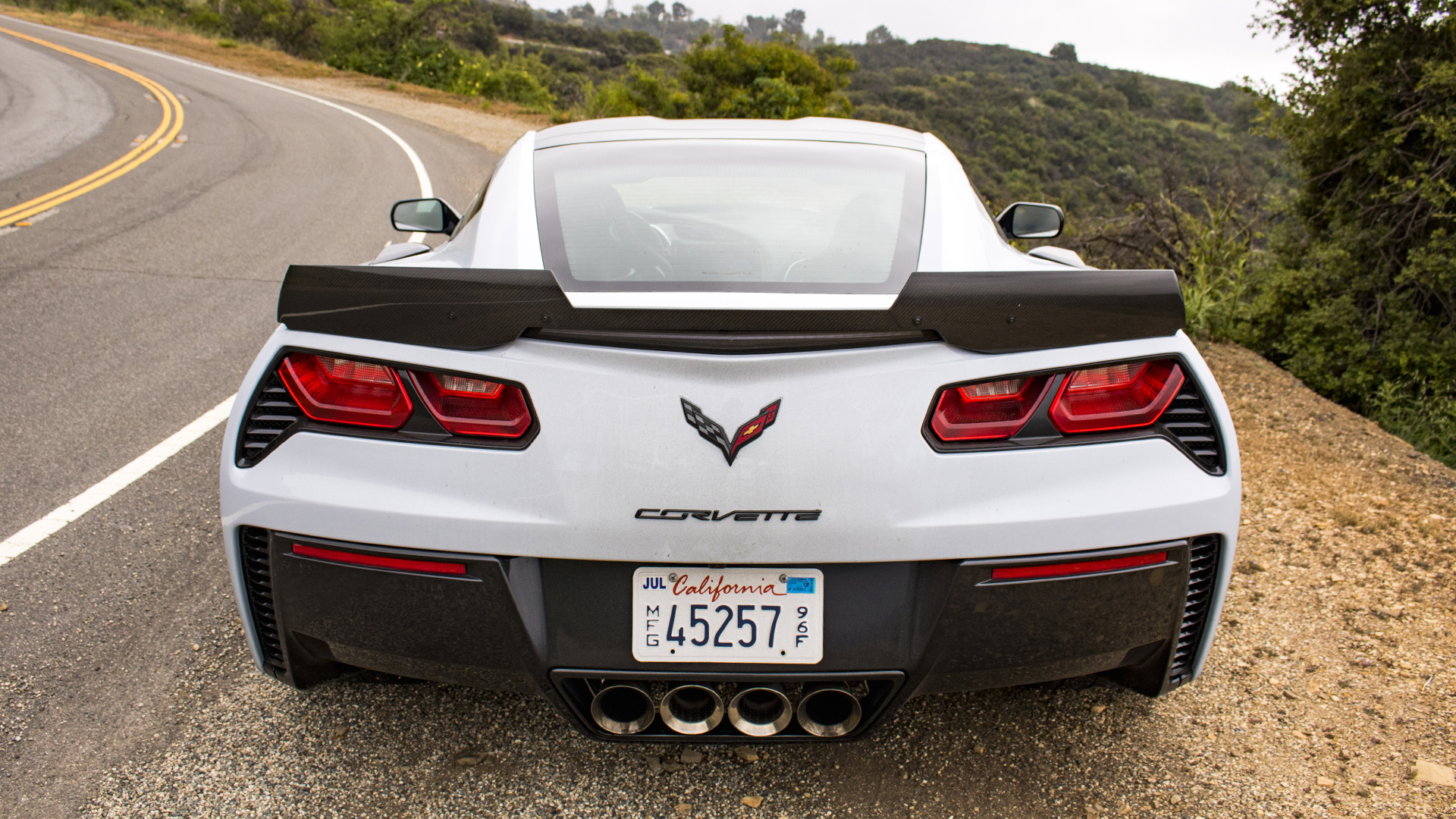 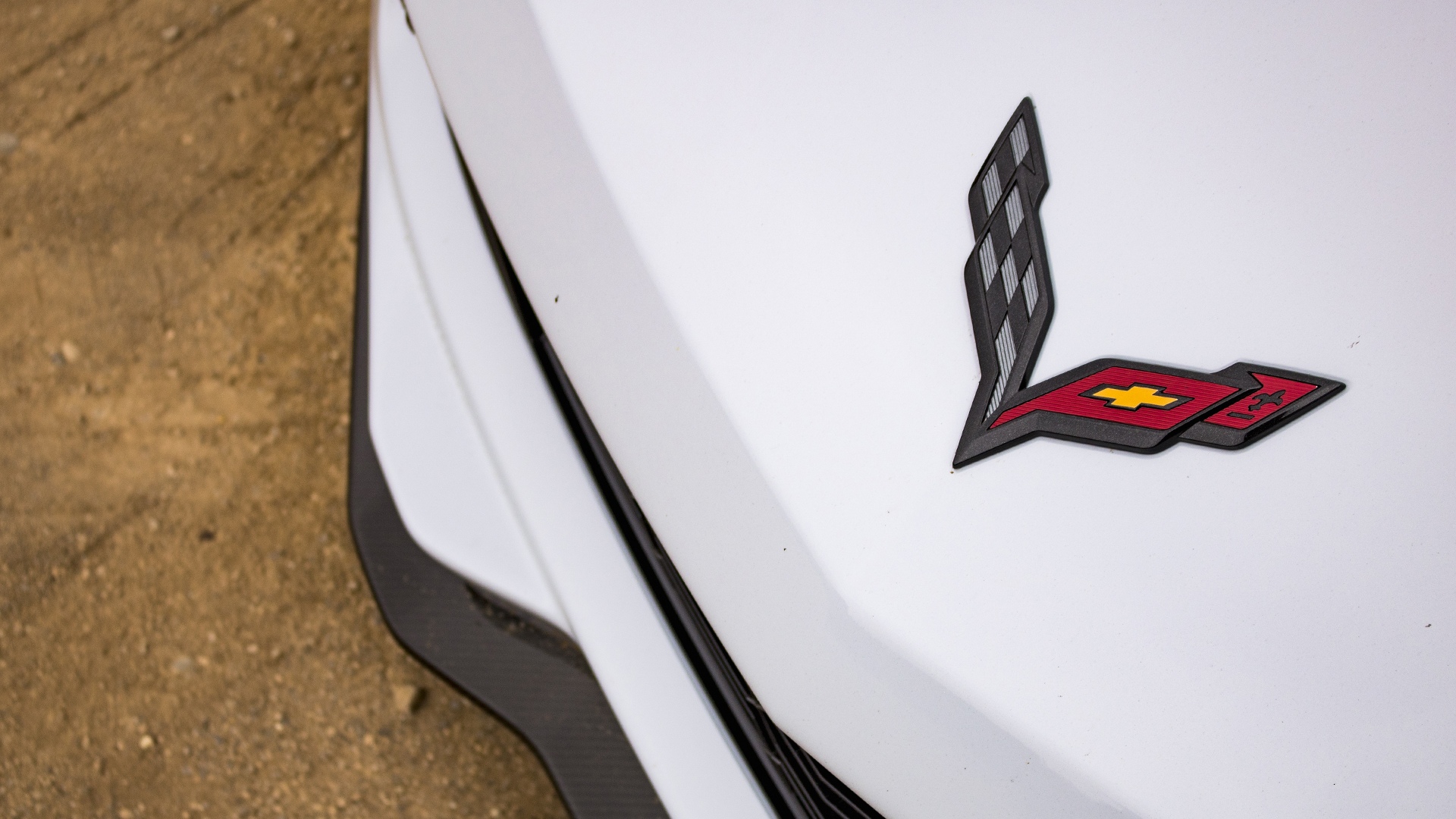 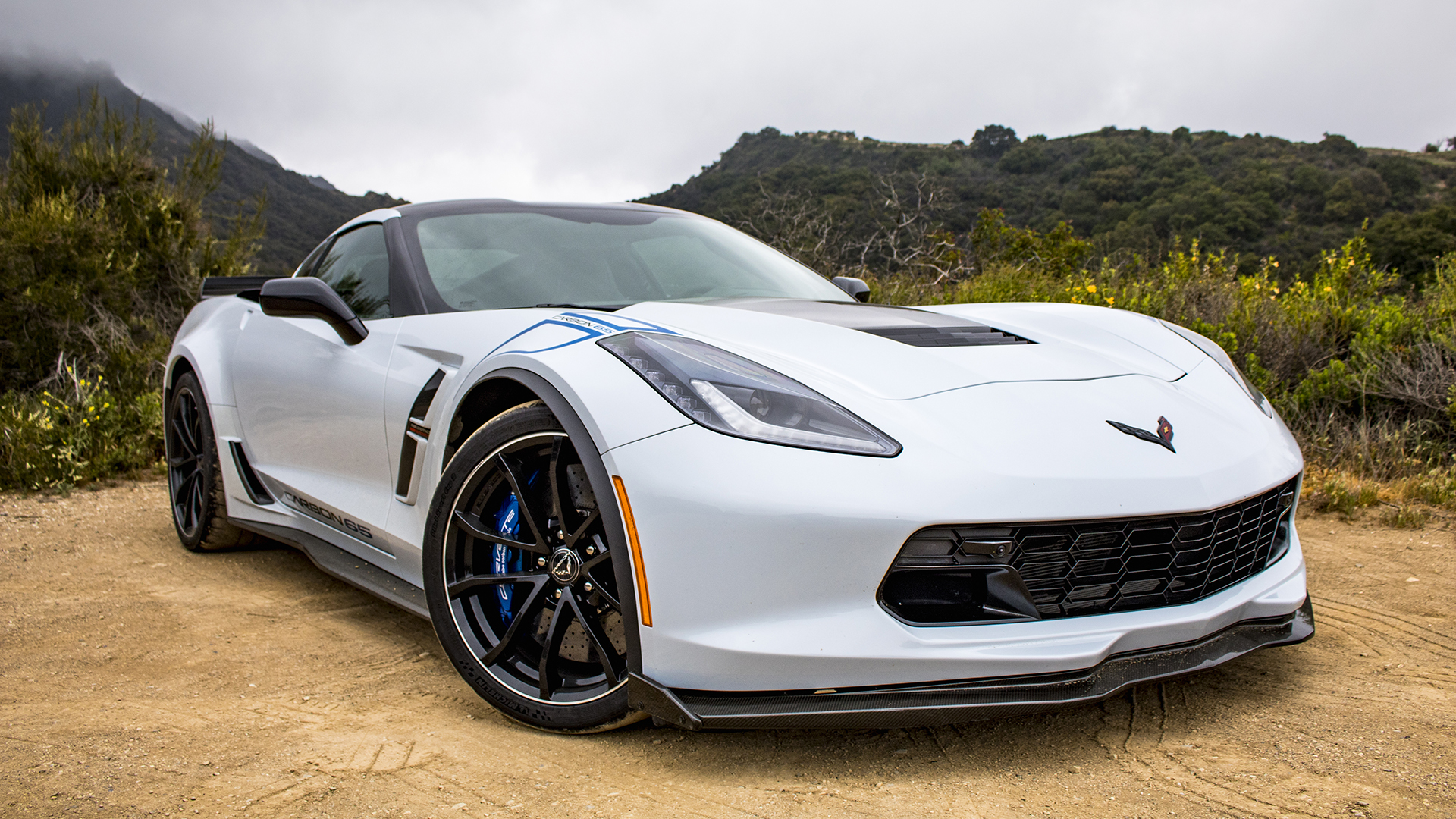 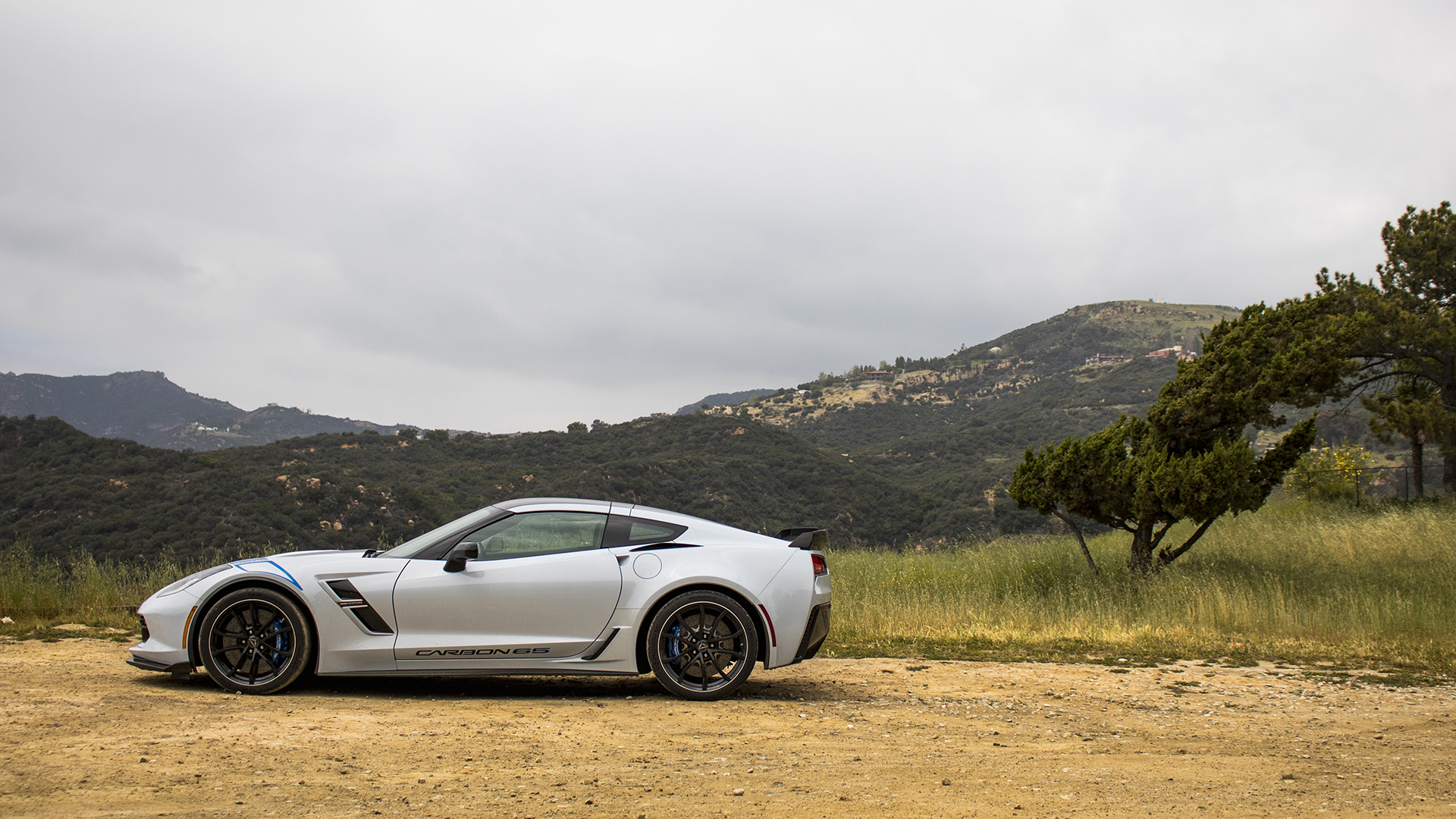 On the exterior, the Carbon 65 Edition punches up the visual drama even further with its exclusive gray body color, special badging such as door and fender decals, and enough carbon fiber to build a Dreamliner; the front splitter, rear spoiler, body kit, hood insert, side mirrors, and wheel caps are all cast from the material. I'm wild about the paint, but less so about the decals, which have the overall effect of making it look kind of toyish—a Hot Wheels car brought to life.

Maybe that's why random people seemed to love it so much. The Corvette has always been seen as a sort of accessible dream machine—a supercar for the middle class—and the population of greater Los Angeles apparently held a secret meeting where everyone decided to give me a thumbs-up on the road. The exotic carbon fiber and unplaceable paint job do draw the eye, but there's no doubt in my mind that people were responding to the car's essential 'Vettitude.

Corvette Is the Host With the Most...Space

Show me a General Motors interior, and I'll show you 10 people who want to watch it burn. And I have to admit, the Corvette's is not worth $100,000—not even close. It just takes one look at the sumptuous cabin of a car like the 2018 Lexus LC 500—another V8-powered, rear-wheel-drive sports coupe—to see that for all its improvements, the Corvette still has leagues to go when it comes to what's inside.

So in that spirit, I'll tick off a few more small annoyances. The low seat is surprisingly hard to extract yourself from. Some of the plastic surfaces feel kind of flimsy, and in my tester, one of the climate control knobs required an unreasonable amount of torque to turn. The same steering wheel is used in both the automatic and manual transmission models, so the latter weirdly repurposes the former's paddle shifters as on/off switches for the automatic rev-matching function. Font geeks will notice Corvette shares the omnipresent "GM interior button" script with essentially every other car in the lineup. I get that value is a slippery concept; you're paying for beauty in the Lexus, and brawn in the Corvette. But the 'Vette should feel more special from the driver's seat.

(And, as my colleague Will Sabel Courtney mentioned in his review of the Grand Sport automatic convertible last year, whoever placed the red-and-blue backlit OnStar buttons just below the rear-view mirror so they always look like cop lights behind you should get punched in the mouth. I don't need that stress.) 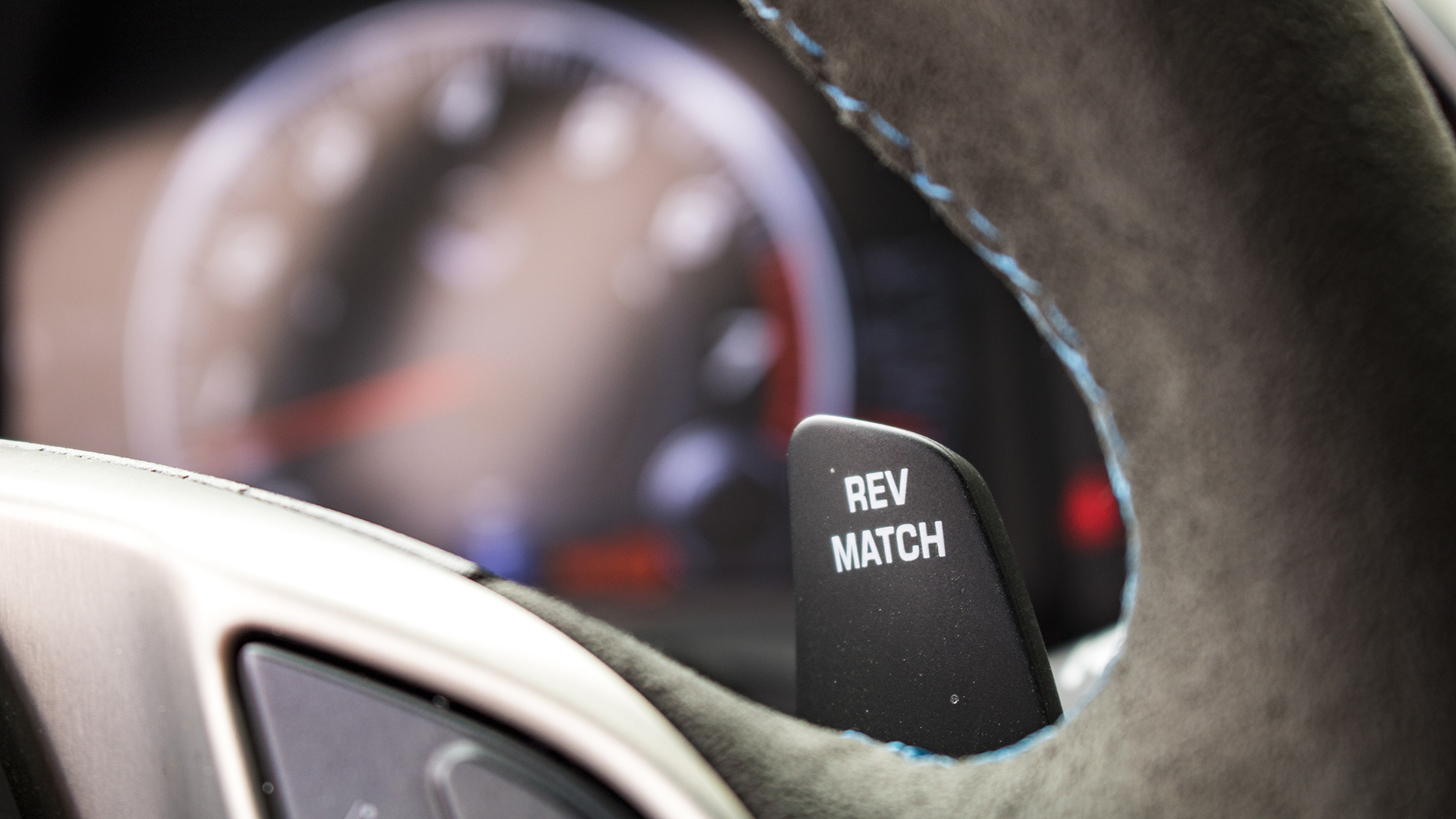 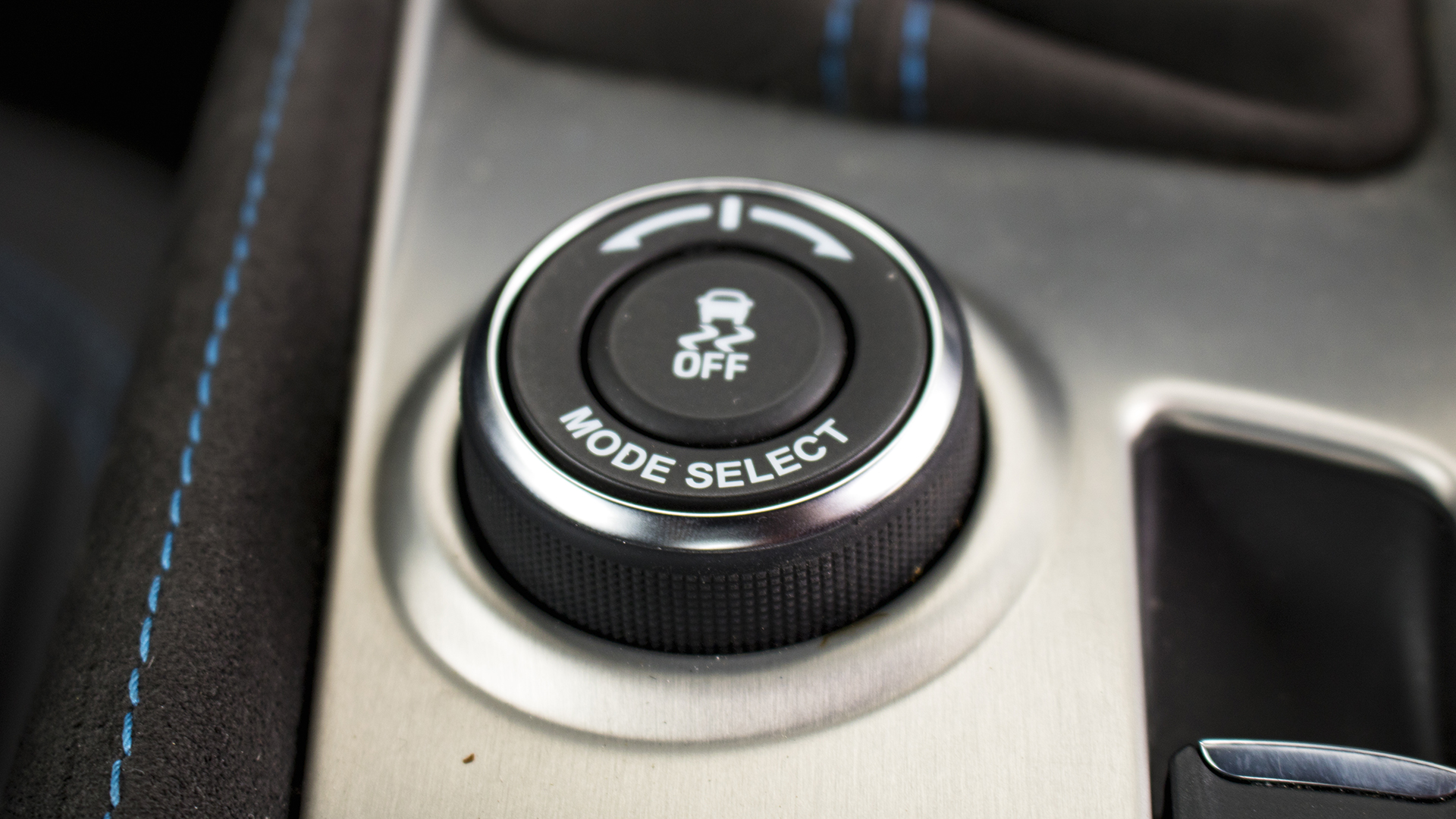 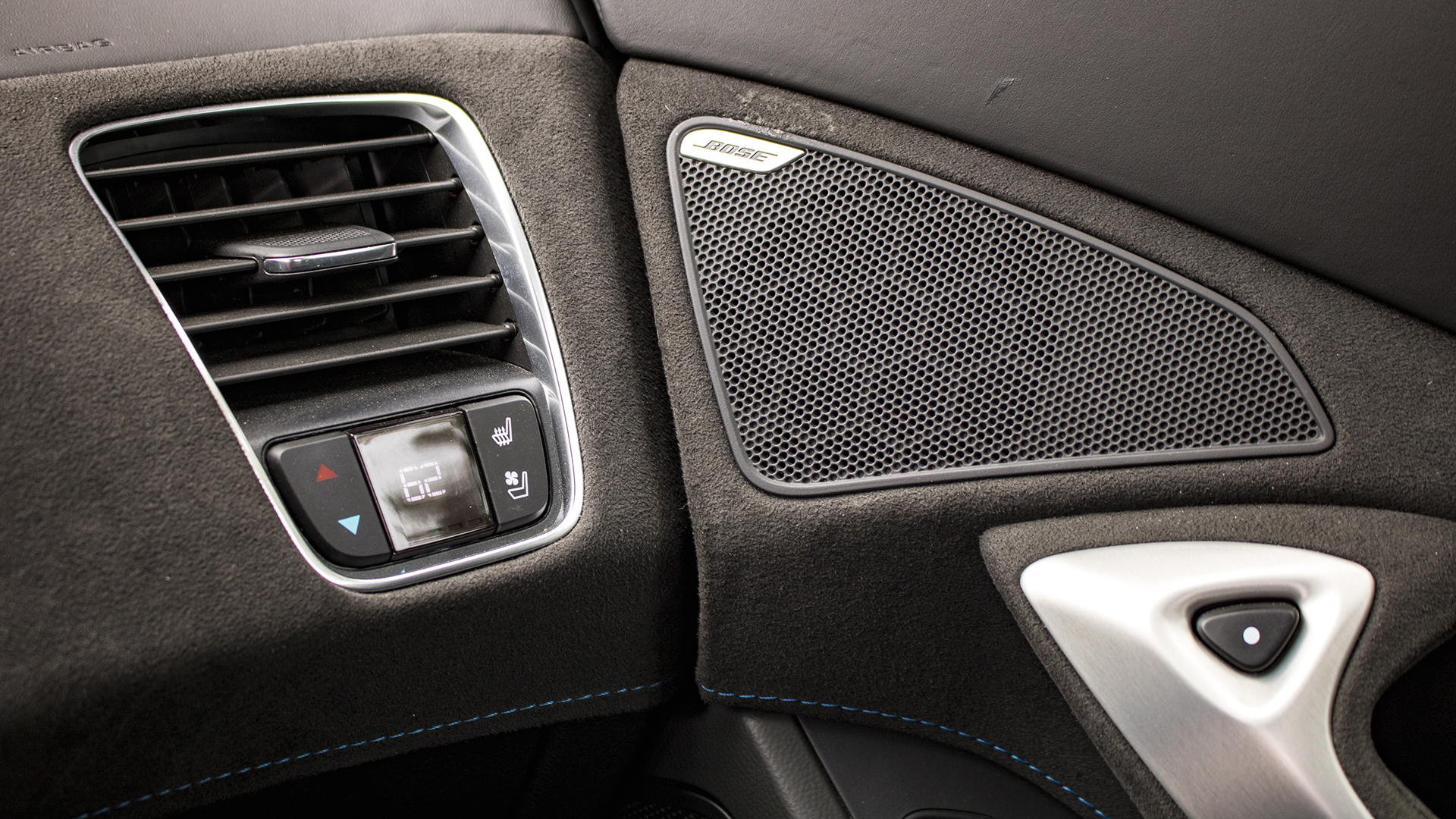 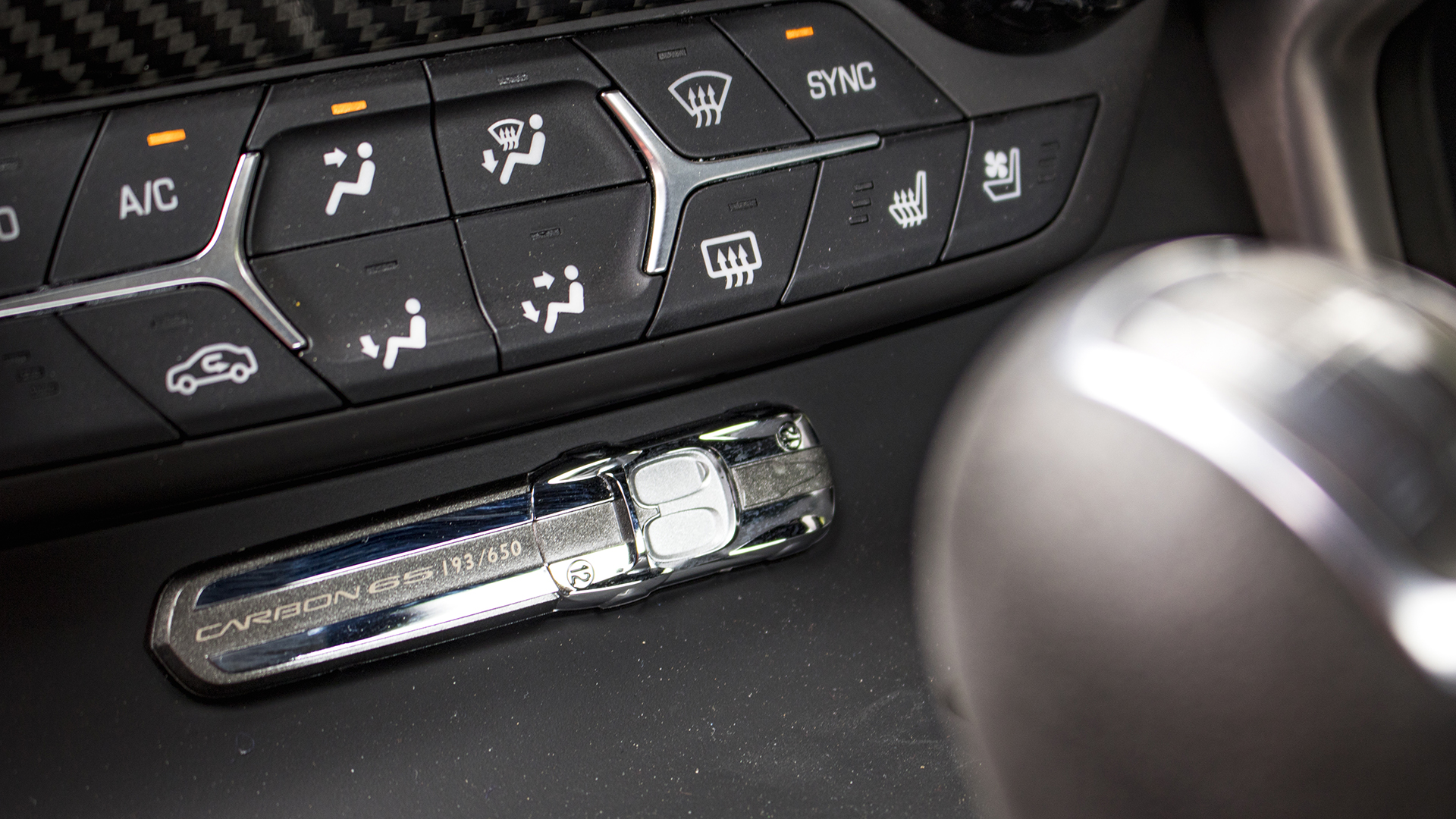 It's not all bad news. Far from it, in fact. In its maxed-out forms, the Corvette coupe is one of the most practical sports cars $100,000 can buy. The official specs list 15 cubic feet of trunk space behind the driver and passenger, which honestly feels like a lowball figure. As our six-foot-plus motorcycle expert Sam Bendall found out during his time with the Corvette Z06, you can actually sleep flat in a 'Vette if you stretch your legs forward between the seats. I was so excited to hit the canyons that I forgot to take my 30-pound, corpse-sized bag of laundry out of the back before blasting off for Malibu. I didn't even notice until I stopped to take some pictures a few hours later.

The Carbon 65 package adds steering wheel and center console carbon fiber trim, as well as cool contrasting blue stitching on the dash and the Competition Sport bucket seats. It all combines to make the interior look a little more upscale, and those heated and ventilated buckets that hold you in the perfect driving position are extremely comfortable for being so thin. Add in a crisply-animated gauge cluster and a hilarious view out over those swooping front fenders, and to drive a 'Vette is to be reminded not to take life so seriously.

On a Dark Mountain Highway

As I mentioned, I had but two days with the Corvette before I had to leave town on another assignment. And so I got to work, burning eight straight hours, God knows how much rubber, and an entire tank of fuel carving every single canyon in Malibu without so much as a pee break. Usually, rain and fog are enemies of a good drive, doubly so when they're unleashed on the unprepared denizens of Southern California. But I wasn't going to let that stop me. I was on a mission to find nirvana in the mountains.

In a word, the engine is phenomenal. Sure, there are more efficient or more powerful motors out there, but few pack the magic combination of naturally-aspirated character and usable power found in this pushrod LT1 V8. At 460 horsepower and 465 pound-feet of torque, it has just enough grunt to make you feel alive without also bringing the risk of imminent death often found in the Z06. This thing is alive, a mechanical concerto that has you rising out of your seat, stomping your feet, and screaming "Encore!"—except you're behind the wheel, and all you're doing is mashing the gas pedal even further into the carpet.

The smallblock never felt challenged despite elevations passing 4,000 feet, and I discovered no cooling issues like those that have bedeviled the Z06. It's worth noting that the Corvette Grand Sport can achieve 30 miles per gallon on the highway, thanks to a tall seventh gear and cylinder deactivation technology. It's also worth noting that I did not get anywhere close to that number in my own, er, highly scientific research. 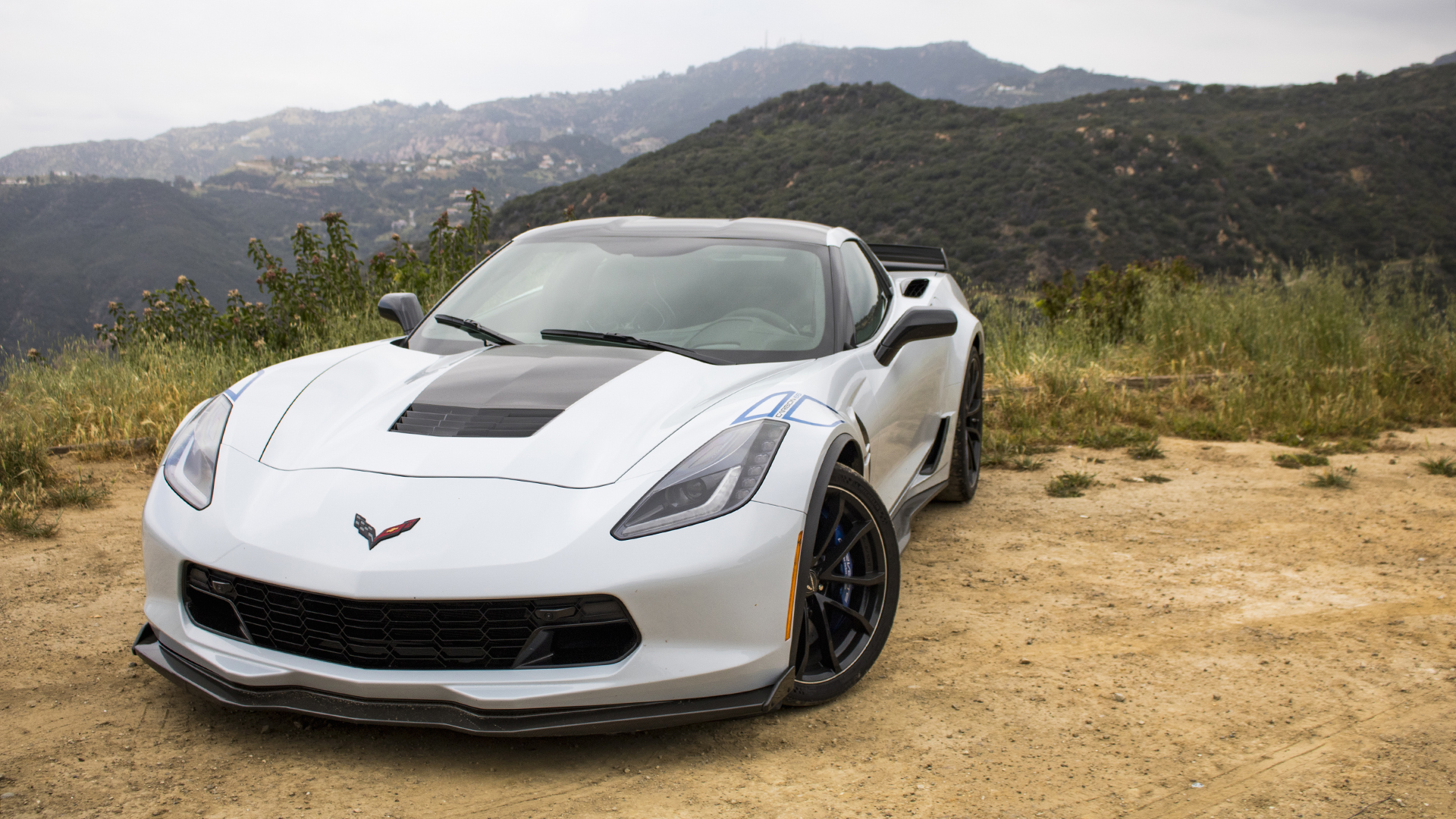 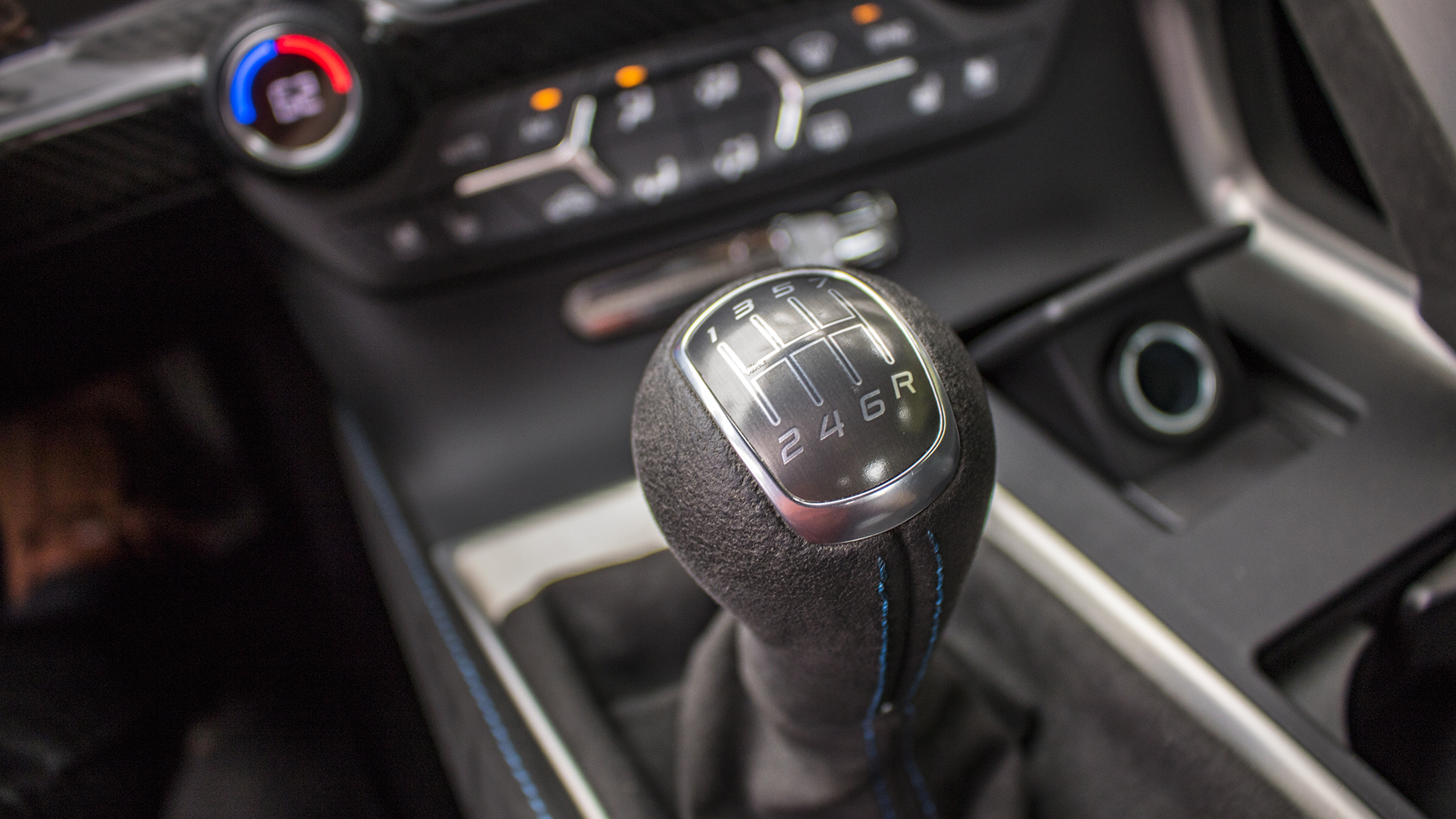 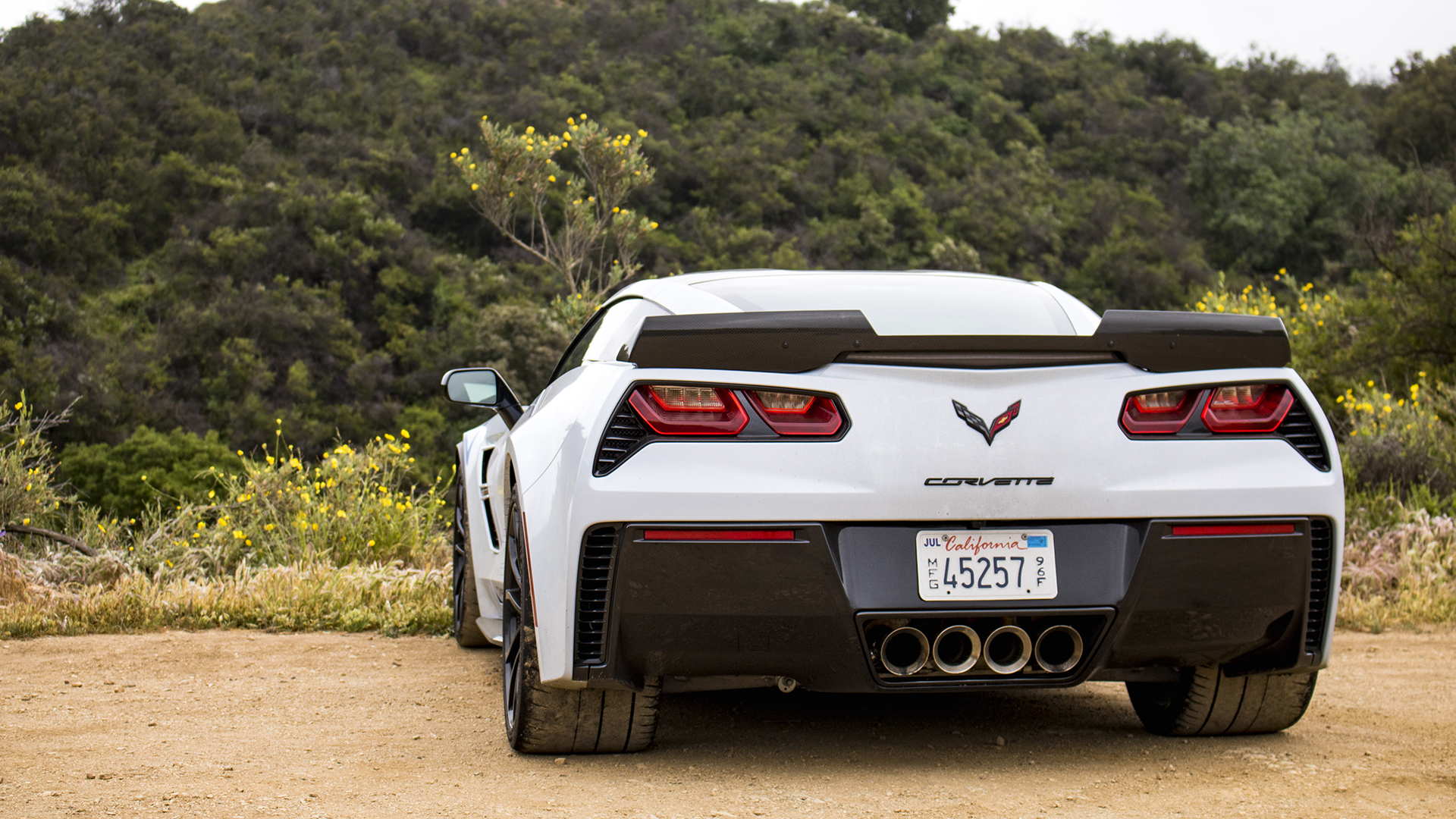 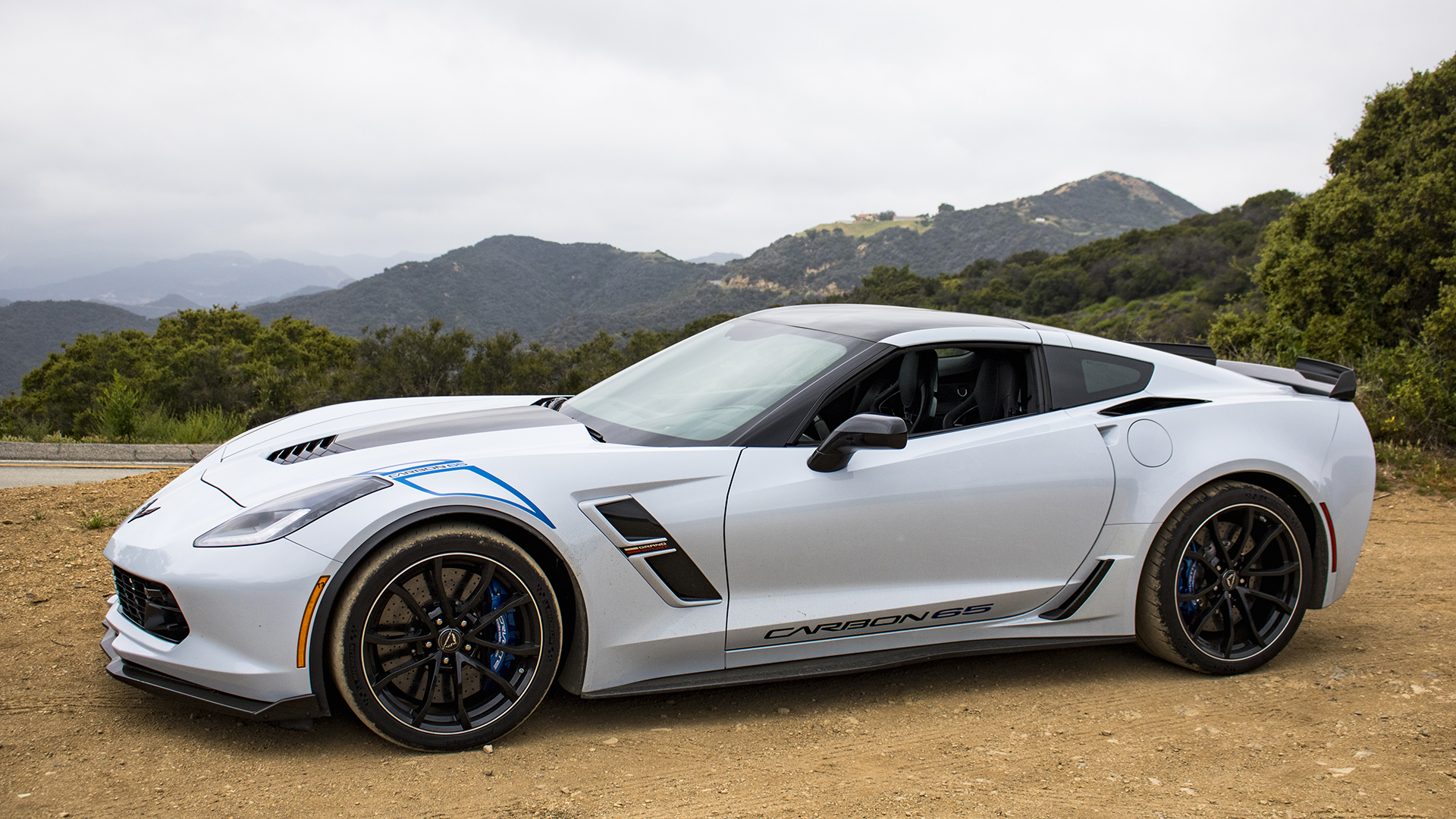 The seven-speed manual transmission is a blast, with notchy, sharp throws and a firm clutch. There's no greater high than having full control over a roaring V8—but no greater low than GM's awful skip-shift technology, which locks out second and third gear in everyday driving to force a first-to-fourth gear change in the name of fuel economy. There are a couple ways to defeat it, including revving the crap out of the engine, but the most foolproof and permanent method involves pulling a fuse. Why, GM, why?

That's the sum total of my gripes from behind the wheel. The car was nigh-impossible to upset in the twisties, even with a set of Patrick Stewart-bald rear tires after a few months in the hands of children other automotive journalists. (Surely the Z07 Ultimate Performance package, which adds the sport-tuned suspension of the Z06 and a set of Brembo carbon-ceramic brakes, had something to do with that.) But the famous magnetic ride control and the car's electronic limited-slip differential out back still kept things composed on a few stretches of deteriorating pavement high above Malibu. The Grand Sport is practically on rails, especially without the extra power of the Z06 to upset the balance. The Corvettes of old used to be derided as "point and shoot;" that is, unable to handle anything other than a straight line. Well it's high time the modern 'Vette reclaims the phrase as a badge of honor, because if you point this car's steering wheel in any direction, you can be sure as shit this Chevy will shoot that way.

The different drive modes—principally Tour, Sport, and Track—all provided marked differences in steering weight, suspension stiffness, and throttle response; Sport mode seemed the best suited for a dual-purpose day that took me from the city to the canyons (and, sadly, back to urbanity). It was a transcendent experience up there, skipping over mountaintops and flitting with the clouds in a bone gray metal sledge. I found something close to paradise—and my limits as a driver. The car's limits were nowhere in sight. 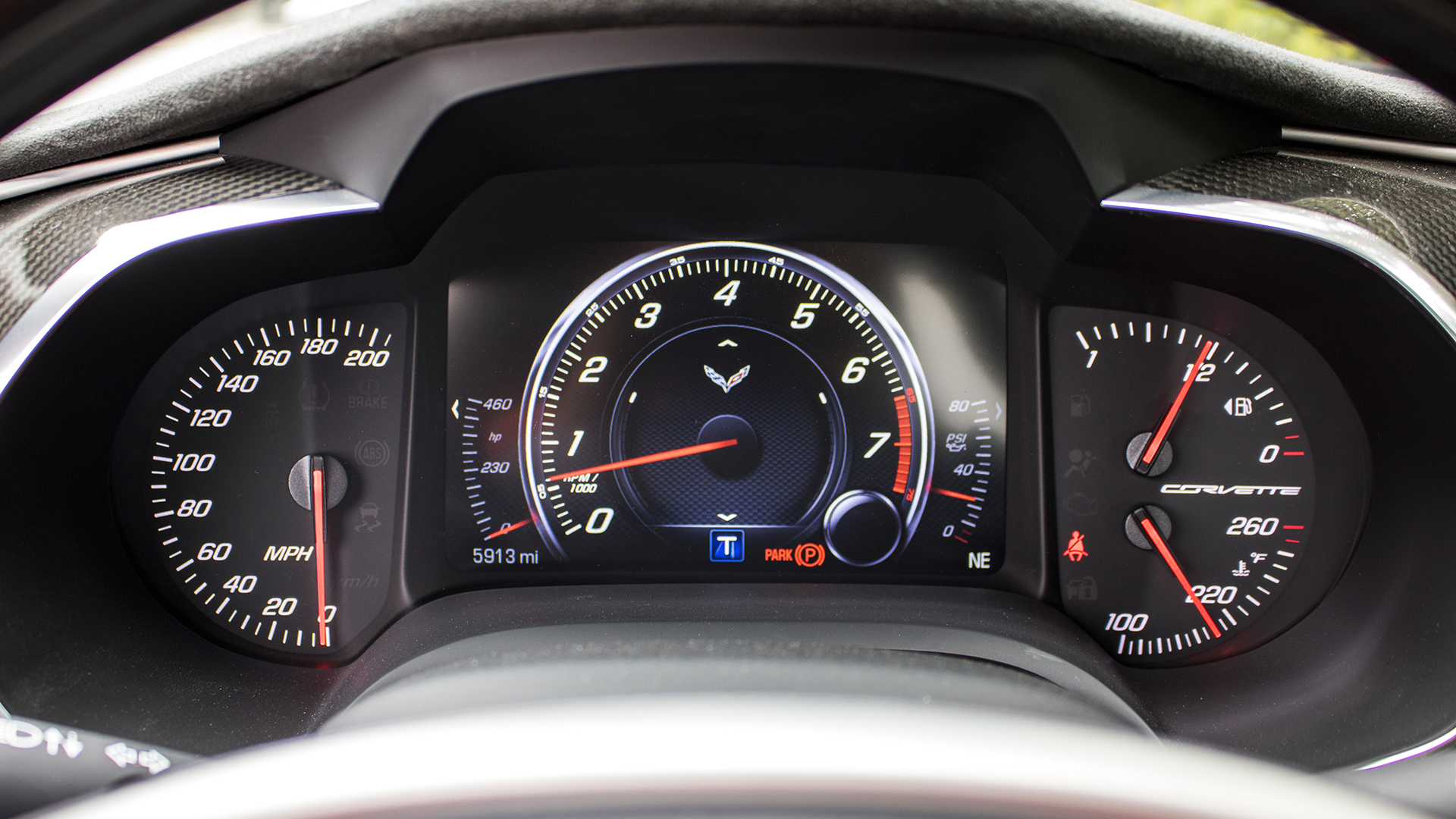 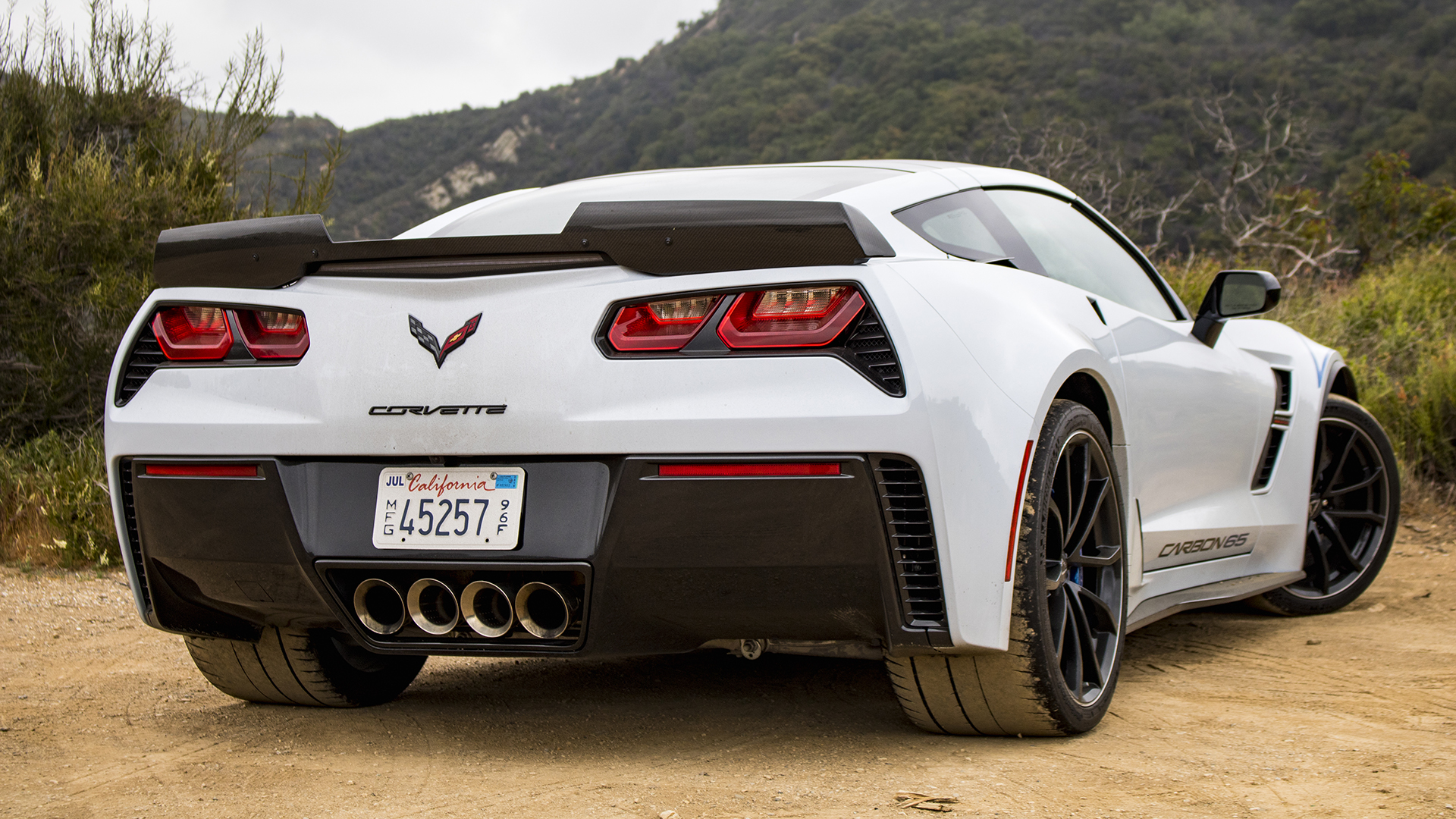 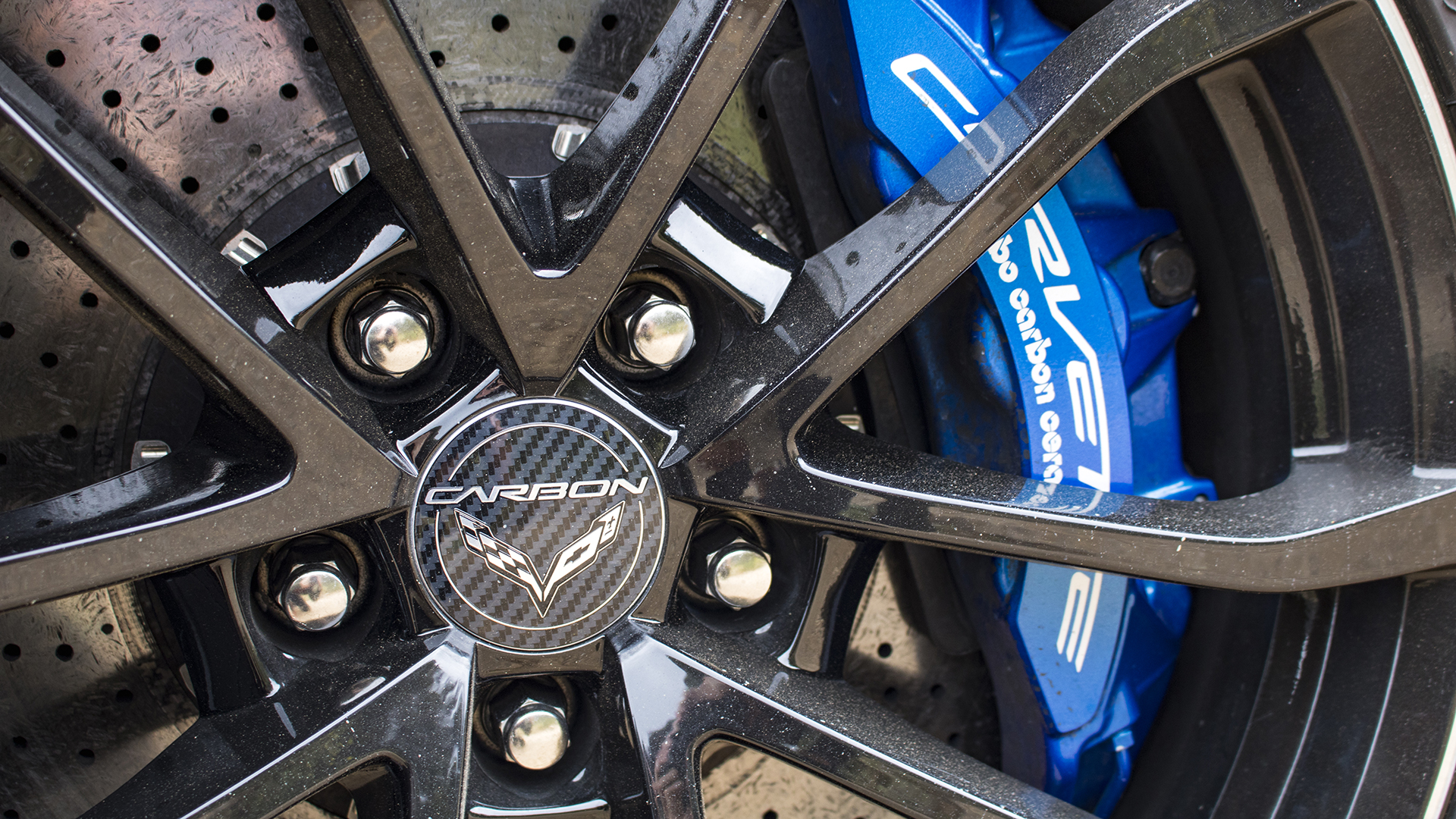 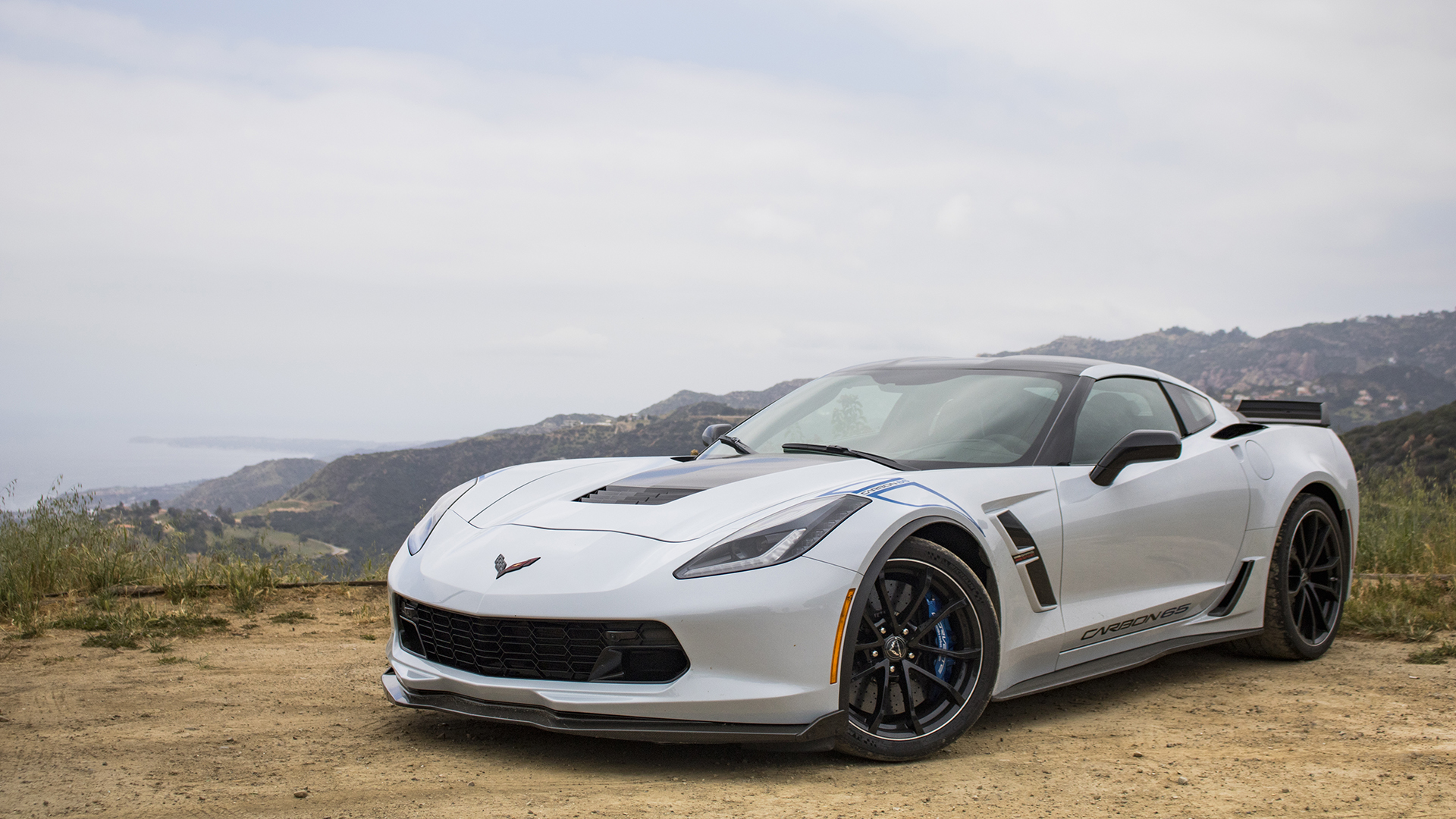 The Chevrolet Corvette Grand Sport Carbon 65 is both a mouthful and one of the purest sports cars on sale today. In many ways, we've come full circle and returned to the roots that made the Corvette a mid-century American icon. Those early years were filled with sublime, compromise-free cars built to own the street—and after several decades of listless bloat, the Corvette's return to form was always going to be a home run for most people.

I won't say everyone, because there is one major sticking point here: the price. As equipped with all the bells and whistles, my test car cost $99,230 (including destination). With taxes and title, that's a six-figure Corvette. I can praise the car's balance and handling all day, but for some, paying $100,000 for something that's not the fastest or most powerful example will be too bitter a pill to swallow. Not to mention spending $15,000 on the Carbon 65 package alone, considering it's entirely cosmetic.

But one area where there's no debate is the Corvette's impressive versatility, and in that regard, it's a true winner in the trunk-challenged world of wildly impractical sports cars. It's low and sleek, but not so low that I was unable to navigate the crumbling, off-camber entrance to the parking lot where many of these pictures were taken. It's a proper performance coupe, but it has the cargo space of a decent-sized sedan. It's always ready to clear its throat and sing to the heavens, but it can act civilized when you need it to—provided you ignore the fender decals on the Carbon 65.

Then again, there's another way to look at it. In testing, the Corvette Grand Sport was just a second slower than the last-generation, 638-horsepower 2009 Corvette ZR1 around the track at GM's Milford Proving Grounds, a car that cost the equivalent of nearly $120,000 today. One second slower, for $20,000 less. Not such a bad deal after all.