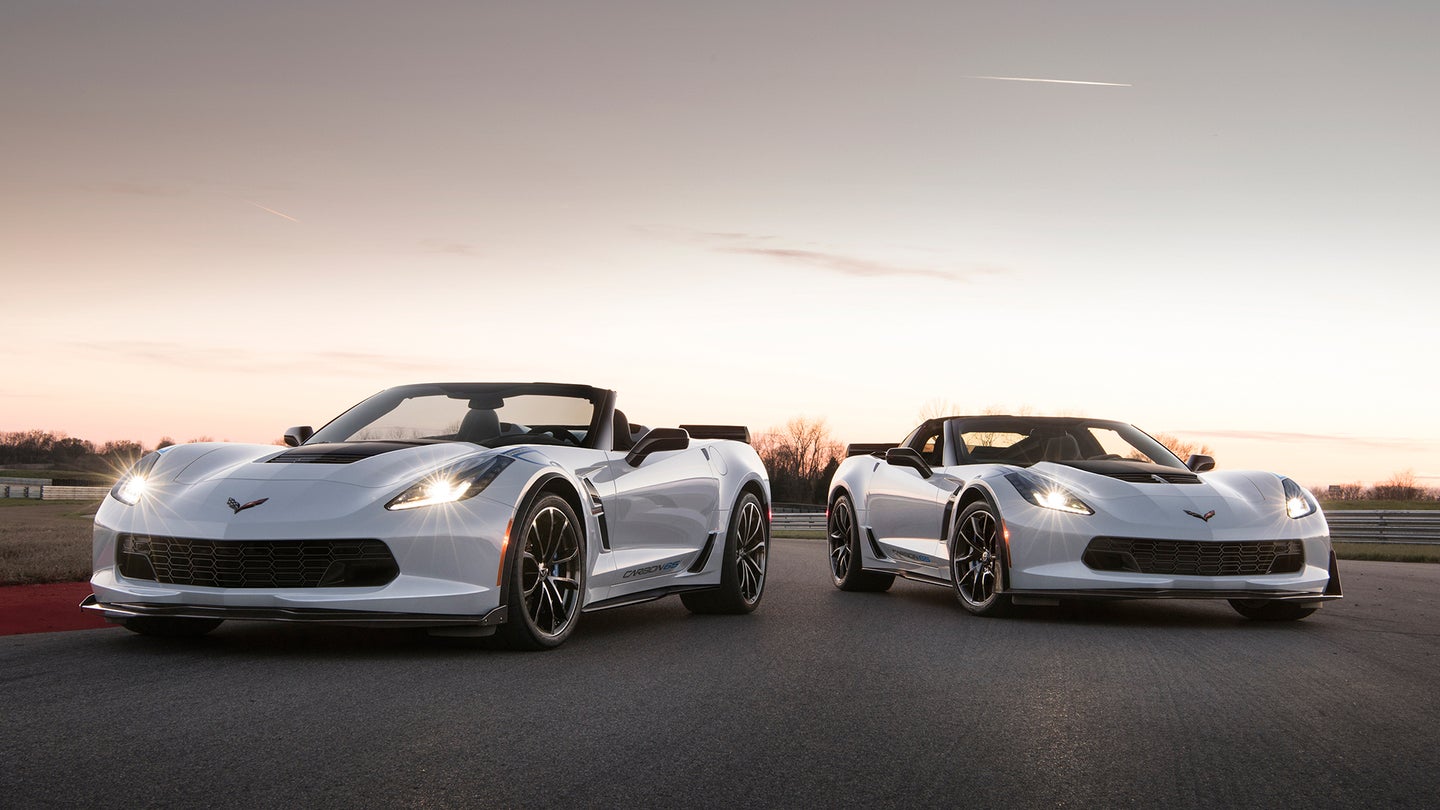 For reasons that have always defied this author's understanding, The Powers That Be of the world long ago set a guideline as to what you're supposed to give someone for their anniversary. The first anniversary is paper; the second cotton; the 25th anniversary silver, and the 50th gold. The 65th, however, is apparently carbon fiber—at least, in General Motors's book. Because Chevy has created the carbon fiber-heavy Corvette Carbon 65 Edition in honor of the 'Vette's 65 years on Earth.

The Carbon Edition will only come on the 3LT (that's GM-slang for "fanciest") trim levels of the Corvette Grand Sport and Corvette Z06. Only 650 will be made, each clad in Ceramic Gray paint with special door and fender graphics boasting the phrase "CARBON 65." (There's a kick plate that says the same, too, just in case you forget in the two seconds it takes to open the door.)

As you'd expect from a car with "Carbon" in its name, these special 'Vettes come complete with carbon fiber trim bits—in this case, visible carbon fiber ground effects, spoiler, and part of the hood on all models. Coupes also get a carbon fiber roof and intake ducts, while the convertible gets a carbon tonneau cover to go with its blue soft top.

Inside, the Carbon Edition comes with the Competition Seats clad in black suede (presumably with some leather) held together with blue stitching. Glossy carbon-fiber trim bits adorn many parts not covered in soft-touch materials, and interestingly enough, the steering wheel also is covered in carbon fiber.

Chevy also made a few other trim-line tweaks to the Corvette lineup for the 2018 model year. We won't burn up too much of your time going through all of 'em—if you want to see them all, you can read GM's press release here—but the highlights are: Larger new Z51-derived wheels for the Stingray (19-inch up front, 20-inch back); a greater number of standalone options, like magnetic ride control for the Stingray and carbon-ceramic brakes for the Grand Sport; and a few new wheel and paint color options. Basically, nothing that's likely to make you want a Corvette any less.