The VW ID.4 Can Be Shockingly Capable Off-Road—With Caveats

Modified by Tanner Foust Racing and Rhys Millen Racing, an ID.4 was the first all-electric SUV to complete the Rebelle Rally. 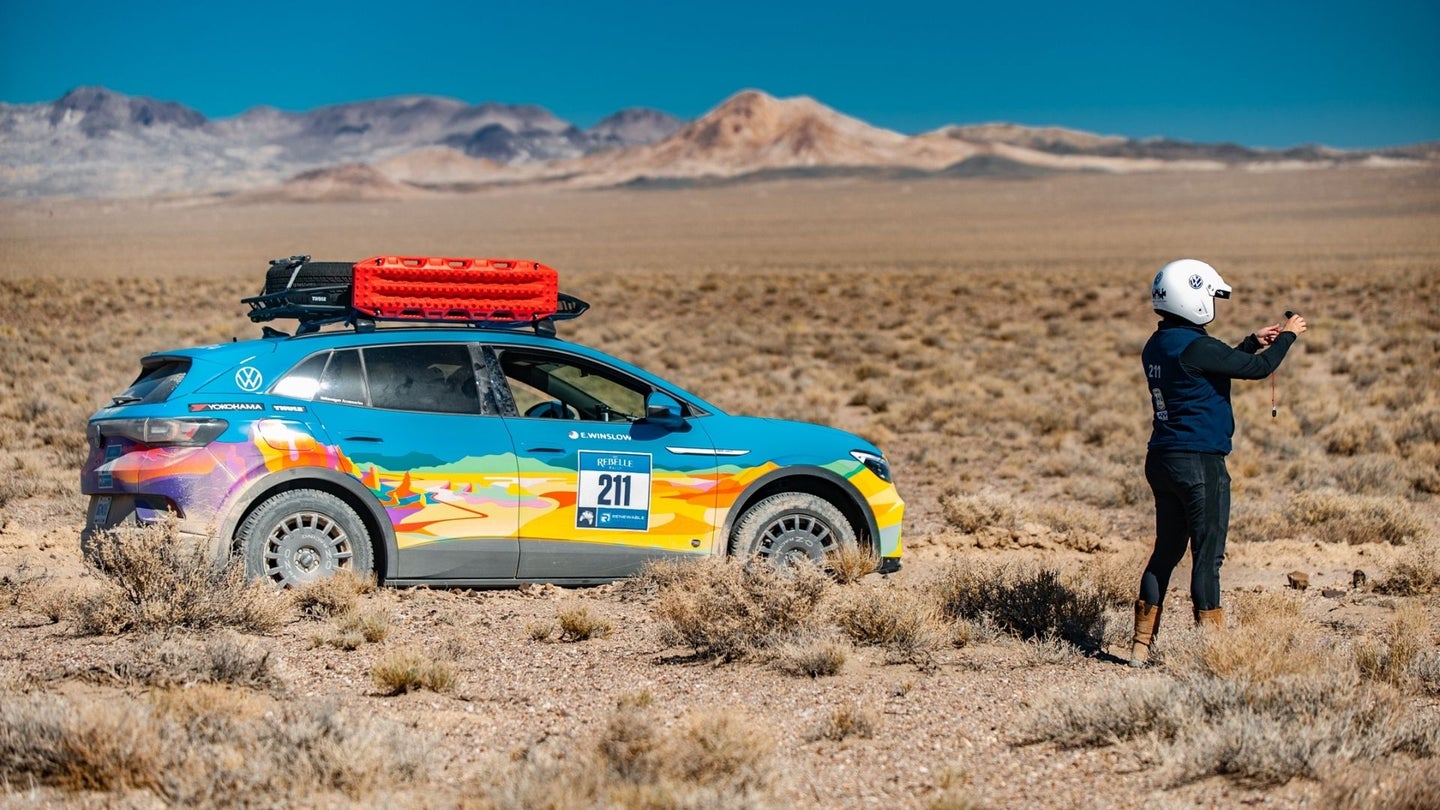 Sure, world-record driver Rainer Zietlow drove a new Volkswagen all-electric ID.4 for 97 days straight, logging nearly 36,000 miles and touching every state in the continental U.S. He and his trip partner, cameraman Derek Collins, stopped at 208 Electrify America charging stations and set a new Guinness World Record for driving continuously in one country with an EV car, more than doubling the previous record.

It's impressive. But he didn’t have to traverse almost 1,500 miles of off-road terrain with no GPS and a Kevlar skid plate underneath. That distinction was achieved by Emily Winslow and Mercedes Lilienthal, the navigator and driver piloting an AWD ID.4 in the Rebelle Rally last month. In both cases, driving the EV to maximize its battery power was key and expected. Winslow and Lilienthal discovered that they were pleasantly surprised by how well it performed off road.

Winslow had competed in the Rebelle Rally twice before, both in Subaru Crosstreks at stock height. Subaru is a no-brainer on dirt roads and can navigate rocky paths like a mountain goat and in the first year, Winslow’s team finished second in their class. Going in, she didn’t know if the ID.4 could meet the capability of the Crosstrek. By the end of the rally, she said the Volkswagen EV was up to the challenge, even going so far as to say that it performed as well as the Subaru.

Lilienthal, an experienced off-road driver who has navigated in the super-challenging Alcan 5000 in the Arctic and a 2018 Rebelle Rally competitor in the 4x4 class, agreed.

“As the vehicle driver, the Volkswagen ID.4 surpassed my expectations when it came to its off-pavement performance. The all-wheel-drive ID.4’s driving dynamics, tight steering, and easy maneuverability made this SUV a pleasure to pilot,” she said in a press release from Volkswagen. 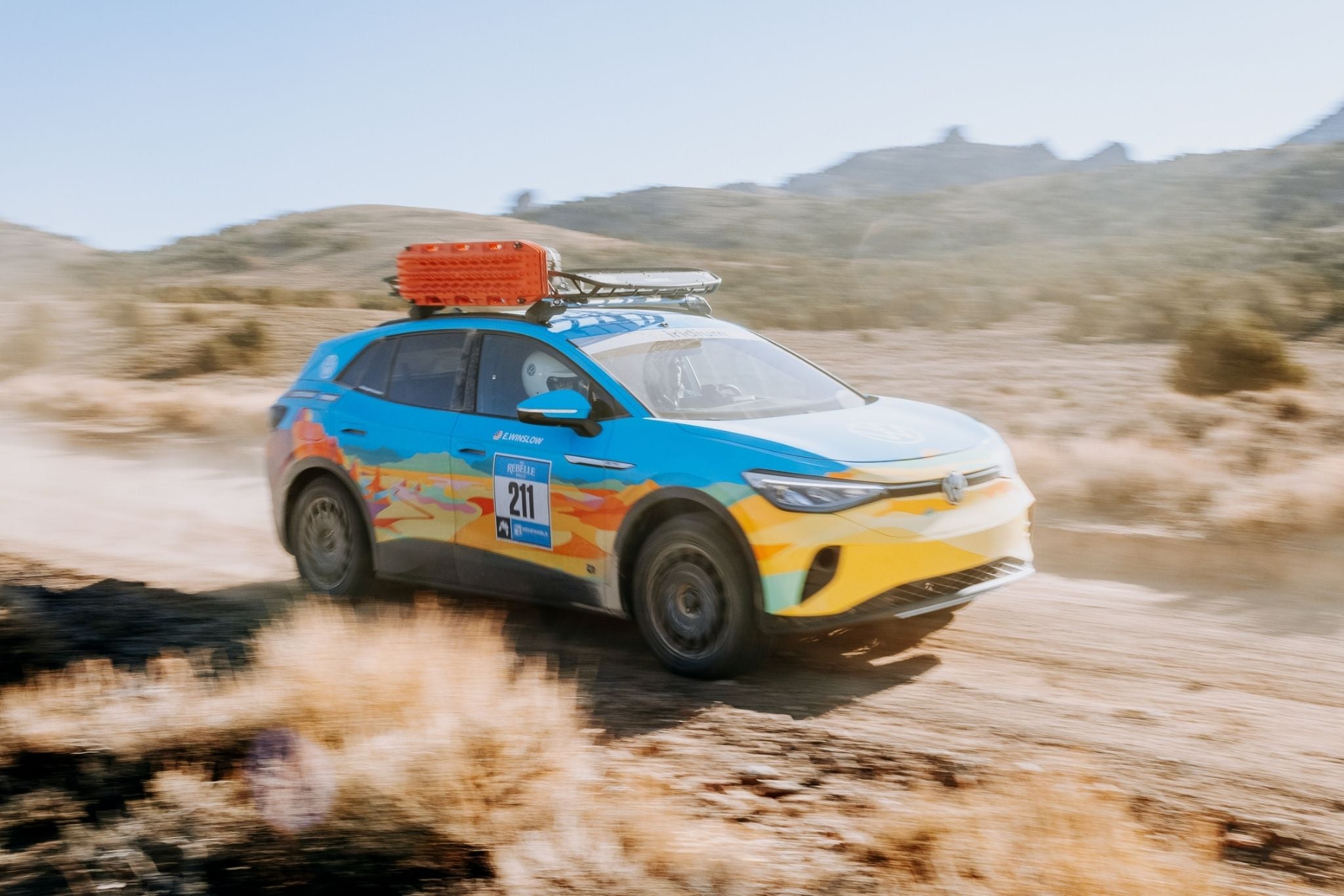 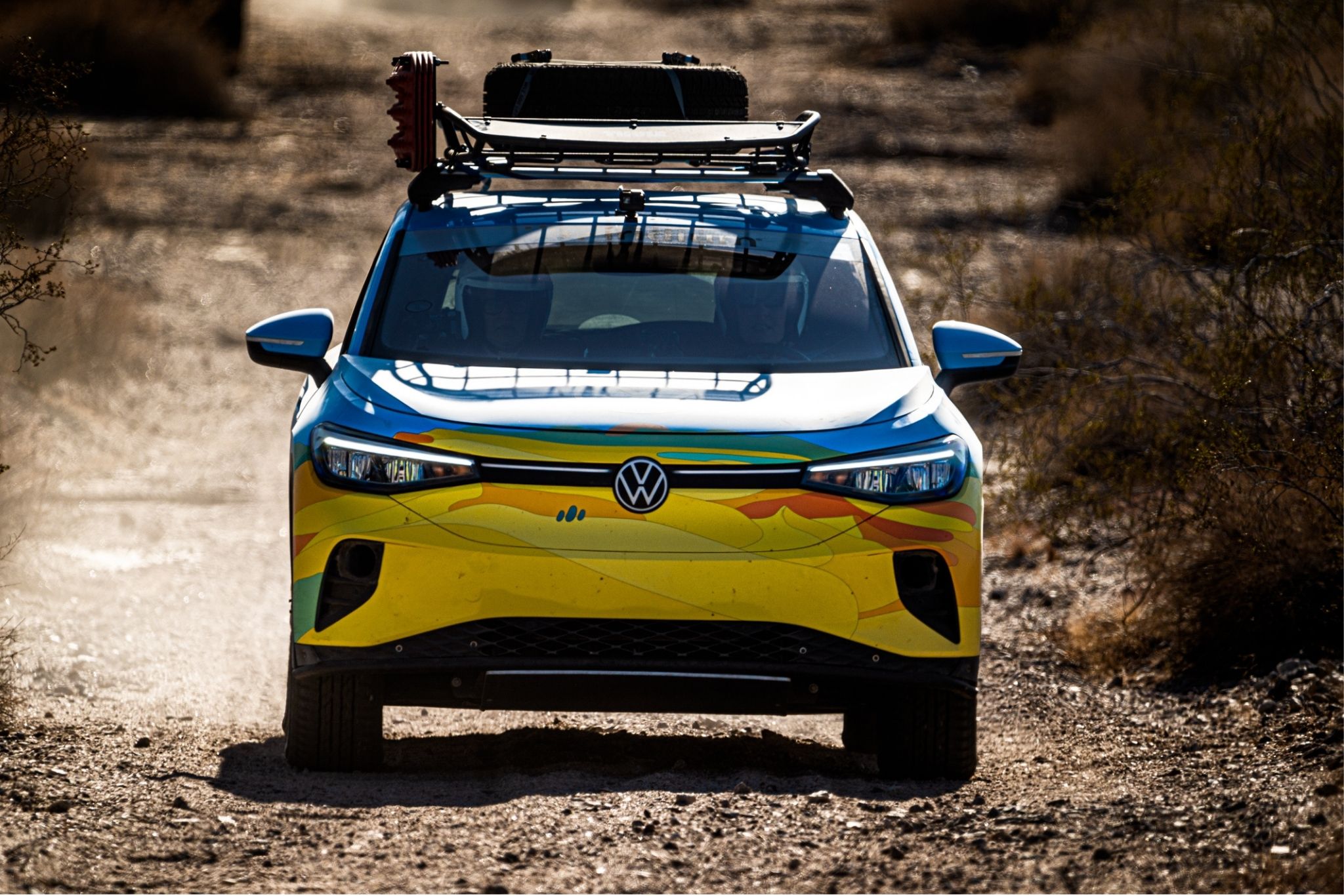 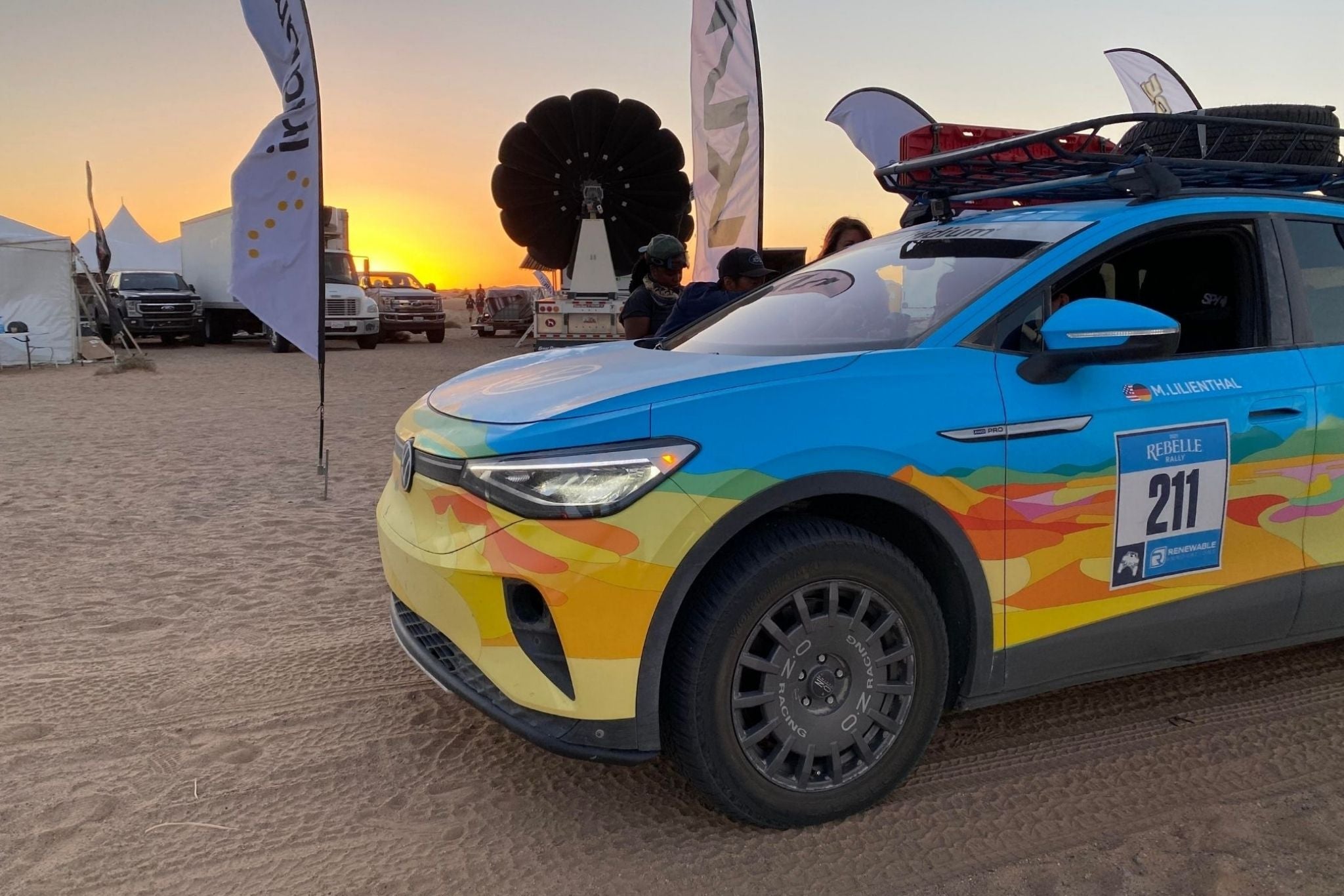 Competing in a battery-powered car was a whole new challenge for both of them, however.

The ID.4 has two electric motors (one on each axle), producing 295 horsepower and 339 pound-feet of torque. In the Pro trim, which is the variant Winslow and Lilienthal were driving, has an estimated range of 249 miles, and the team had to work together to stretch that to its limit. Winslow needed to navigate as tightly as possible to avoid wasting battery power, and Lilienthal called on all of her driving skills to steer the vehicle through the course and back to base camp each night without running dry.

“We had to game plan how to save as much battery as we could,” Lilienthal told me. “We never needed a tow or had a range issue, but we played it very conservatively.”

One thing they did–and they're clearly heartier than I am–was to refrain from using air conditioning entirely. They succeeded, even in the hot Glamis Dunes in southern California, even though they say they were drenched at the end of the day. Lilienthal drove the car in Eco mode the whole time, and found they didn’t have any problems with battery drain causing electronic issues as some of the PHEVs did.

“On the practice day, we had our biggest challenge,” Lilienthal recounted. “We had 37 miles to go and realized it was going to be very tight. We even called the Rebelle organizers to say we weren’t sure if we’d make it in, but we were able to coast and gain back 33 miles while driving and made it to base camp with six percent left.”

Key strategies, Lilienthal says, included using light, even throttle, not driving above the speed limit, using regenerative braking when she could, and avoiding hard braking to regenerate slowly instead.

One of only two all-electric vehicles in the rally this year (the Rivian R1T was the other), the modified ID.4 AWD Pro is the first fully-electric SUV to complete the Rebelle. While it was mostly stock, the Volkswagen was modified by Tanner Foust Racing and Rhys Millen Racing. New suspension components, tubular control arms, Kevlar skid plates, battery protection were added to help the ID.4 weather the elements and harsh countryside.

While the skid plate protected the underside, the ID.4 lost a measure of ground clearance. It didn’t seem to affect the outcome, though, because the car finished the rally in great shape. If they rallied in the ID.4 again, Winslow and Lilienthal say they'd lift it. The suspension performed adequately, and it would have even more capability if it had more room.

"I honestly didn't think it could crawl over obstacles, but it did," says Winslow. "In B mode [which recovers energy], the ID.4 almost worked like four-low does in other vehicles."

Voted 2021 World Car of the Year, the ID.4 is undoubtedly turning heads. Would you drive it off road on a regular basis? Maybe, maybe not. But it's good to know that it can.

Got a tip? Send a note to the writer at kristin.shaw@thedrive.com.