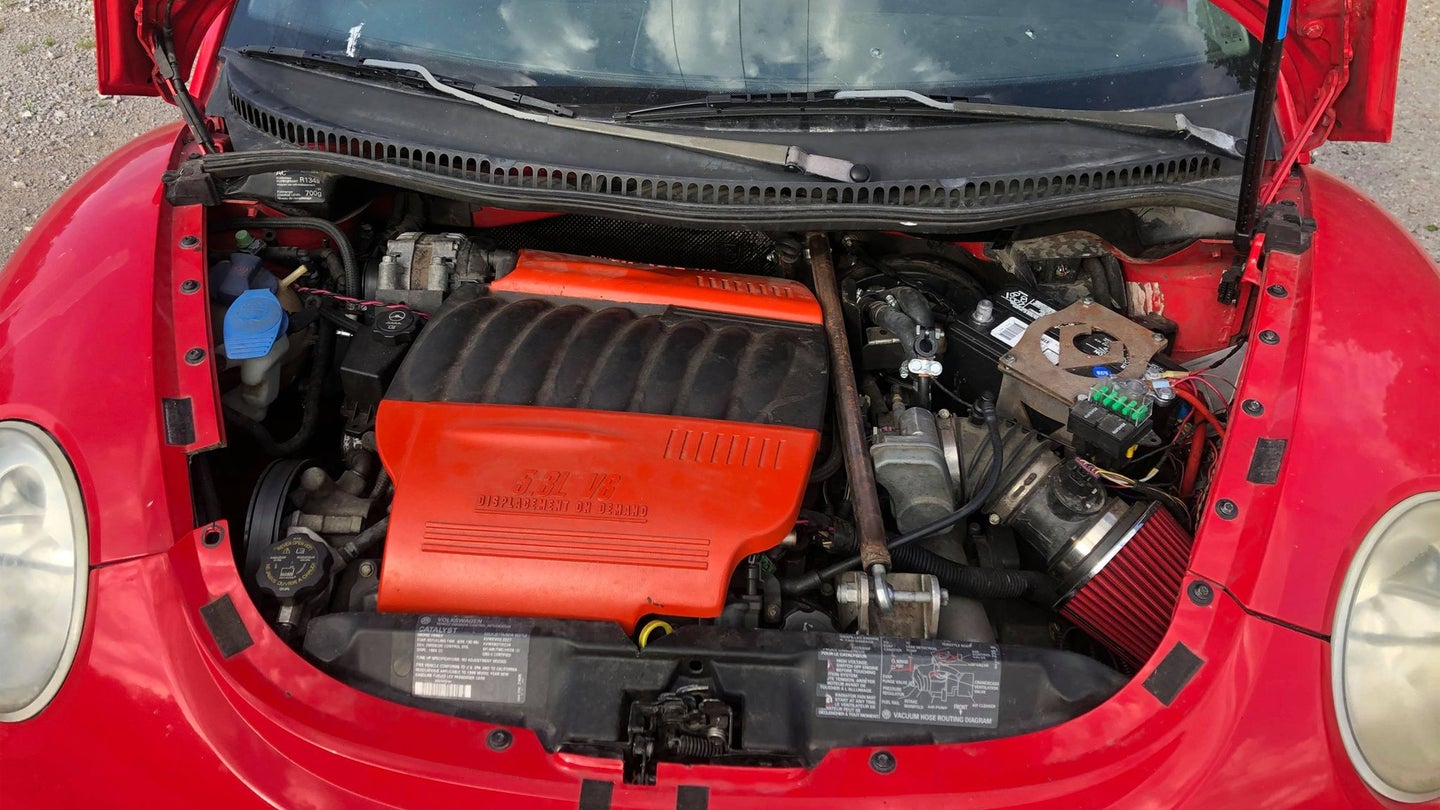 The soft and bubbly appearance of the Volkswagen New Beetle makes it one of the least menacing cars on the road. It's not quick, nor is it particularly pleasing to look at, but perhaps throwing gobs of power and doubling the number of cylinders under the hood might make it more interesting. And in fact, that's exactly what one madman did to change the tune from "boring" to "sleeper,” and now the world's most muscled-up VW New Beetle is for sale.

This 1999 Beetle was built by Dave Hill, the owner of a small customs shop in Provo, Utah. According to the current owner, Hill bought the Beetle with a bad transmission and immediately knew he would be LS-swapping the car to bring to LSFest West in Las Vegas. He pulled the Beetle's factory four-cylinder and performed a daring heart transplant from a 2006 Monte Carlo SS donor car, retaining the original transverse layout of the 5.3-liter LS4 V8 since both the donor and Beetle are front-wheel-drive cars. In fact, the factory GM transmission was also able to be reused since the Beetle was originally equipped with an automatic.

After countless hours of custom fabrication to dial it in, the small block Chevy motor now sits nestled tightly in the German car's engine bay, meaning that the Beetle now has 303 horsepower on-tap—more than the venerable Beetle RSI and Golf GTI R32. Can you say torque steer?

The finished product also retained the Beetle's near-factory appearance by changing out only the car's wheels. As long as you ignore the absolutely glorious exhaust note, it's only a head turner when you mash the gas. Like the owner told us, "If you had your eyes closed, you'd never know it's a Beetle."

The vehicle changed hands several weeks ago after the builder decided to raffle off the car. Nick Gee, who happens to own a diesel shop, picked the winning number and trailered it back home to Tennessee. The Beetle has been parked in front of his shop since. Nick told The Drive that several people have even stopped in the shop because they recognized the car and asked to take a look at it.

Over the weekend, Nick put the Beetle up for sale in a Facebook group called LS Swapped. He told us that although he thinks the car is interesting, he doesn't have time to finish the fabrication work needed to forge the custom lower control arms needed for the build. Instead, he's putting the car up for sale so that someone else who might appreciate the quirkiness of the swap can have their dream build.

As you might have imagined, the thought of an LS-swapped Beetle is incredibly popular with the internet. In fact, Nick told The Drive that he had received over 100 messages since posting the car for sale. If it doesn't sell, he plans to put a four-inch lift on the car and transform it into a Baja-themed Bug for LS Fest East which takes place in the Corvette's hometown of Bowling Green, Kentucky.

Even after the swap, the Biturbo name remains accurate.

When “I dare you, bro” takes a very pricey meaning.