This VW-Powered 1957 BMW Isetta Is Wheelie Something Else

And if you hurry, you can buy it. 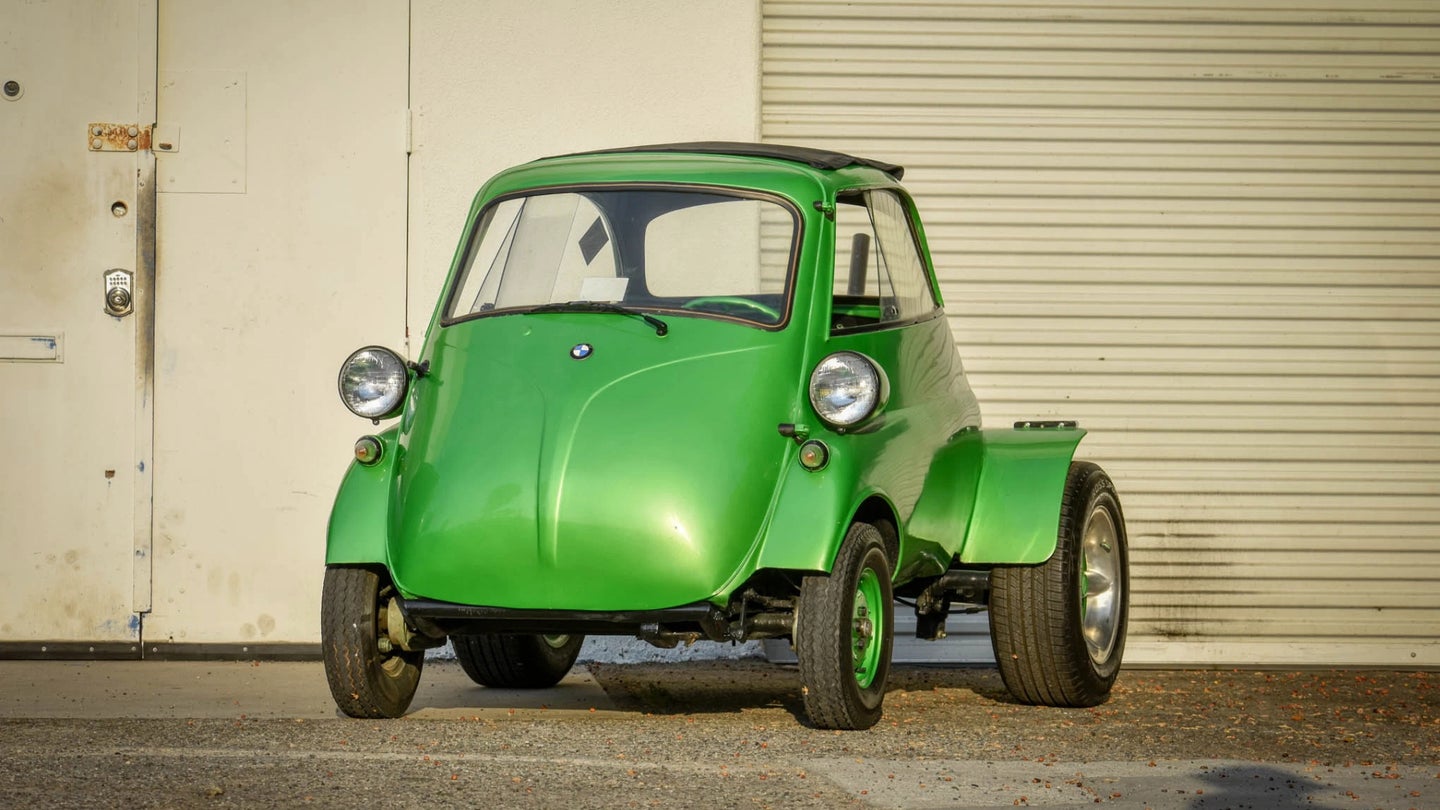 The Isetta is a funny little city car that was produced by BMW from 1955-1962. Based on a model of the same name originally produced by Italian manufacturer Iso, it had a one-cylinder motorcycle engine powering either a pair of small rear wheels or a single, wider wheel. You could only get into the tiny machines through the large front door and they were incredibly unsafe, though power peaked at just 13 horsepower.

That lack of power was noticeable to at least one brave soul with a mechanical inclination and a spare flat-four Volkswagen engine. We know this because the masterful combination of these unlikely partners-in-crime is for sale on Bring a Trailer. It's green, it does wheelies and it could be in your driveway—providing you bid high enough.

This creation isn't just an ill-conceived engine swap, either. It's more like a drivetrain swap. The entire rear subframe from a Volkswagen Beetle has been grafted onto the back of the Isetta, suspension and all. The four-speed transmission out of the Bug was also taken along for the ride.

And if you haven't noticed, all of those pieces only kinda fit. I would say that the Isetta was talked into accepting the Volkwagen drivetrain. The result of this mechanical conversation is that the Isetta had bits of its bodywork ground away and massive rear fenders were added to accommodate its new track width.

The result of all of these modifications is a car that will do wheelies. There's enough weight behind the rear axle and enough grip from the relatively big tires to get the job done.

I'm not sure why you would spend a ton of money on this car—most things on BaT are typically overpriced—however it would be a fun thing to have for a few grand. As of this writing, the high bid currently sits at $3,333, which is on the north end of how much I would pay for what is, really, a cobbled-together toy for the street. This car is a cool machine, but not something I could justify spending any serious money on. Its sole purpose would be to attend car shows and then leave them on two wheels. If that's worth more than three grand to you, I would start bidding.

It Takes a Lot of Work to Get a Semi-Truck to Do Wheelies, But This Guy Did

The Microlino Is a Modernized Electric Isetta

It combines retro bubble-car aesthetics with an efficient electric drivetrain.