Several spouses were jockeying for this 1980s-icon prize. 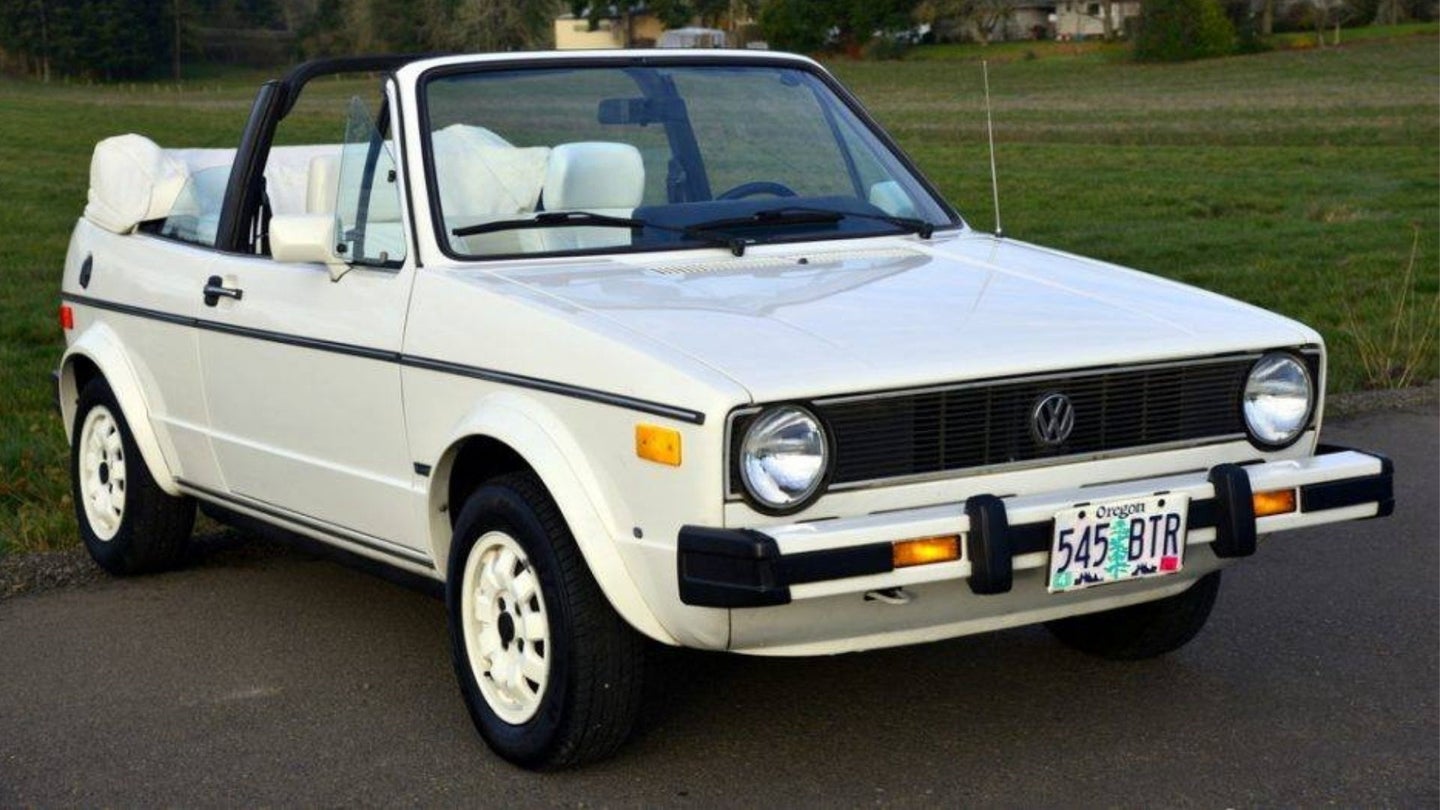 In the 1987 movie Can’t Buy Me Love a young before-he-was-an-enthusiast Patrick Dempsey played a nerdy teenager who bought his way into the popular crowd. His paramour in all of her blonde teenage-ness had a zippy little white 1985 Volkswagen Cabriolet, and she let Dempsey’s character drive it to the airplane graveyard for a date fit for a 1990s-era rom-com.

Several years ago, Christine Burke mentioned to her husband Jon that she would love to have a Cabrio of her own, because it reminded her of spending long afternoons in shopping malls with her friends in her teenage years. She quickly forgot about the conversation, but he didn’t; after endless hours scouring auction sites, in 2017 he found her dream car on Bring a Trailer, logging the winning bid at $5300.

For the 1985 model year, VW ditched the Rabbit name from its drop-top convertible and started simply calling it the Cabriolet. It had a peppy 1.8-liter inline-four engine that made 90 horsepower, and while it wasn’t designed for big power, it was a fun car to drive all over town and let your hair whip in the wind. Equipped with front-wheel drive and either a five-speed manual or three-speed automatic, the Cabriolet was good for 23-25 miles per gallon.

Mechanically, the Cabrio is the same as a 1984 Jetta GLI; the original owner of Burke’s VW saved every single piece of documentation for service along the way, and very little work was needed. The second owner bought it in 2007 in California and brought it to Oregon, where it lived for 10 years until the Burkes snapped it up and put it on a transport truck to Pennsylvania. Just after the owner created an extensive walk-around video of the car, the odometer failed, but he had captured the original 157,000 miles.

This VW was outfitted with new vinyl seats and convertible top, so it does look very similar to the one Cindy drove in Can’t Buy Me Love. Burke didn’t care about any of the specs; she yearned for the experience.

The bidding was fast and furious on this car. Do yourself a favor and take a few minutes to read through the comments that were logged during the auction, because the stories are fantastic. One, in particular, was from a guy who was riding in a VW just like this one the night before his wedding while his beloved was driving. This is too entertaining to leave out:

“She was driving as I had consumed a couple too many oat sodas,” he wrote. “Warm night, top down, and we were zipping along a nice twisty country road. She loved wringing that little beastie out. Anyway, I don’t know what possessed me to do it but I undid my seatbelt, crawled into the back seat and stood up, using the roll bar as a grab handle. It was an awesome rush zooming along that starlit road getting a face full of summer wind.

“Then she looks back over her shoulder up at me, grins wickedly, and yanks the wheel to the left. Holy carp! Ya coulda just said you didn’t want to go through with the wedding, hon! As the car swerved left, I pitched to the right, hit the rear window and fell out onto the side of the car. And there I was, butt-high, feet kicking, frantically grabbing for something other than the spinning tire to hold to. For the life of me I do not know how I managed to stay attached to the car. She pulled over pretty quick and I flopped back inside.”

Burke says her Cabriolet drives like a dream and feels like she’s sitting in a Barcalounger when she’s behind the wheel. For the last few years, she has used it as her daily driver in the summer, shuttling kids around in the small back seats, grabbing groceries, and imagining she is the main character in the movie she has seen 700 times, she says. In the narrow country roads between cornfields in her corner of Pennsylvania near the Poconos, Burke likes to drive at dusk. At that time of day, cooler air is suspended between the towering stalks and feels refreshing after a hot summer day.

It does have an aftermarket radio Burke doesn’t care for and doesn’t bother using.

“It’s just me and the road and the car, and I love it,” Burke says.

Got a story about a car you bought for yourself or as a gift? Send the writer a note: kristin.shaw@thedrive.com