This Couple Drove Across the Planet in a VW Beetle (Twice)

The only thing better than an epic road trip is doing it with someone you love. 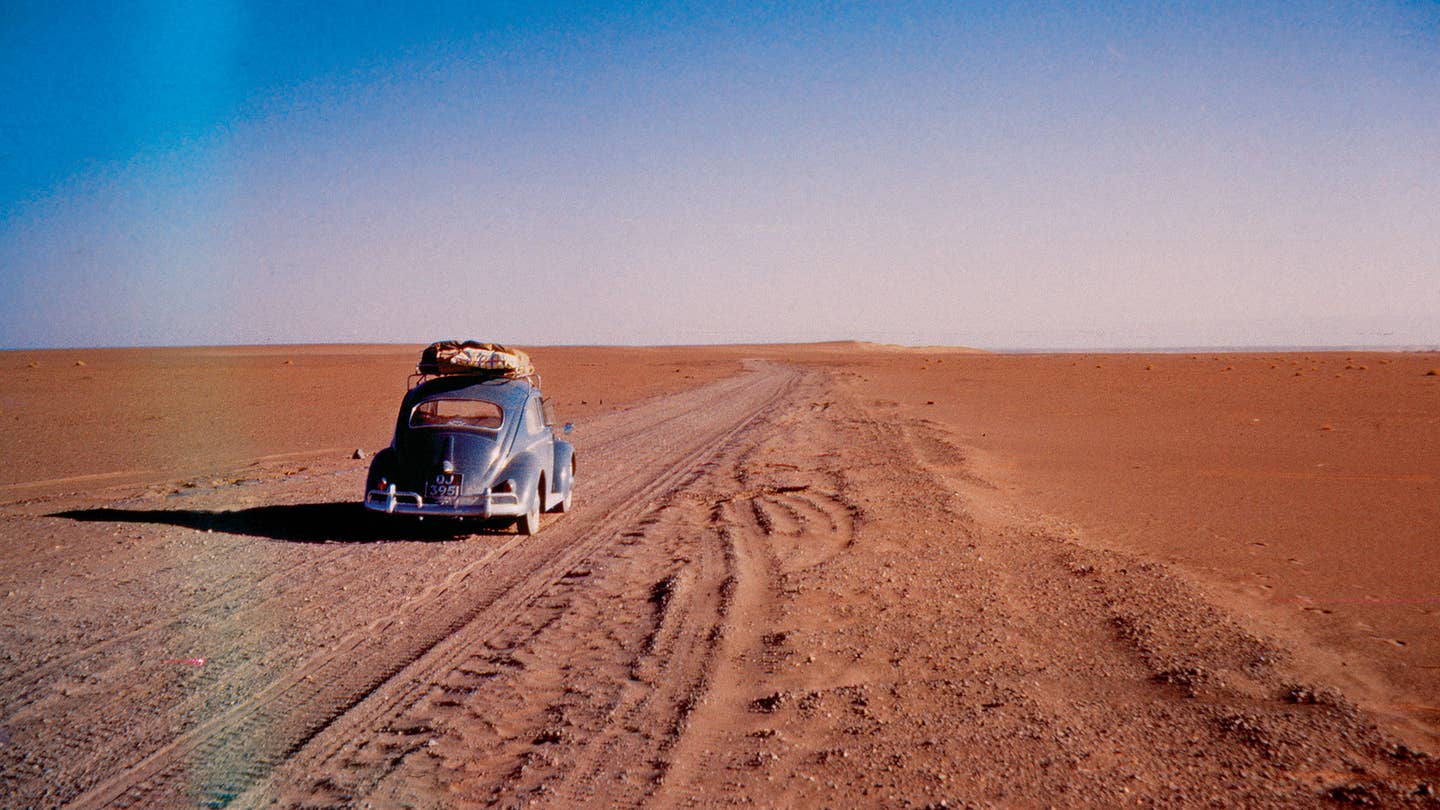 It was time for Ivan and Beth Hodge to go home. In 1961, after two years in Great Britain, the young couple prepared to head back to New Zealand. But, instead of flying or sailing, the Hodges decided to turn the trip into an adventure: They bought a new Volkswagen Beetle, strapped everything they owned to the top, and set a course for home. Thirty five years later, they did it again—retracing their steps in a trusty Bug, on what they call "a second honeymoon." Their new book, For Love and a Beetle, chronicles both air-cooled journeys across the planet, comparing and contrasting how the interceding years changed both the world, and the Hodges themselves. Below is an excerpt.

At first, the flat nothingness of the desert had terrified us. The brown dirt stretching away in every direction. Barren, ugly, we thought, comparing it unfavourably with recent images of the high sea cliffs on the Adriatic coast and the lush fields of Austria.

But then we began to see it. The minute changes. A tussock or four blades of yellowing grass breaking the flatness of the plain. Tiny piles of dirt, scraped together by an animal, a person or perhaps the lasting effects of a whirling sandstorm. Oddly shaped rocks and sudden volcanic outcrops, a lifeless moonscape offering narrow valleys of shade. Browns transformed into yellows, oranges and reds as the sun made its arc across the wide sky. The glow of our cooking fire and the sparkle of faraway stars were insignificant against the blackness of the night. It was as old sailors spoke of the sea: eternal movement in texture and colour.

Hazy figures moved on the horizon – nomads and their camels, we presumed. About once an hour, a car or truck would pass us, and we would rush to wind up the windows as sand and dirt splattered across the windscreen. Staring through the churned-up dust, we determinedly kept sight of the road markers, the small white rocks which were the only indication that we weren’t driving aimlessly in the desert.

We had stopped for an early lunch, intending to take some film. No vehicles had passed by for forty minutes, and Beth began driving up and down the road while I filmed. The little Beetle was a bright blue speck on the brown backdrop. I knew our families would be fascinated by this country and hoped for some good footage, especially for Mum. She would be pleased to see her ‘new’ car exploring foreign lands.

Thirty feet away, Beth was turning the Beetle around. I wanted one more shot with the sun now directly overhead. Brushing dust off the camera, the warm air drying my mouth, I suddenly became aware of the silence. There was no ‘dak-dak-dak’ from the Beetle. Beth had jumped out. All I could see was an arm waving frantically from the other side of the car, her head obscured by the luggage on the roof racks.

‘The engine just cut out,’ she yelled as I hurried towards her.

I switched the ignition and the engine chugged desultorily.

The Beetle was supposed to keep on going. It would never freeze or boil over, the advertisements promised. ‘If you had to, you could drive a VW all day at top speed through a desert.’ Perhaps they hadn’t tried.

With my inept mechanical skills, there wasn’t much I could do. Check the most obvious first, I decided, and pulled out the dipstick for the fuel tank.

‘It can’t be the petrol,’ Beth said, analysing the possibilities. ‘We should have enough for sixty miles. That's what we calculated on the map.’

The dipstick came out clean. The tank was empty. The reserve had five litres. It would take us about thirty miles, not as far as Kerman, the next town. With my long legs sticking out of the door, I folded in half to flick the reserve switch on the floor near the clutch.

Beth smoothed out the map on her bare legs. The AA Strip Map had marked all of the garages on our route. Nothing had changed since the last time we looked. The nearest fuel was still sixty miles away. We couldn't understand why the petrol had run out. Apart from driving up and down for filming, we hadn’t made any detours. Why hadn’t this happened when we were in Athens surrounded by garages?

‘There might be a leak, or maybe it was that poor quality petrol at the last place,’ I suggested.

‘Probably the heat makes it burn faster as well,’ Beth added. ‘It’ll be okay, someone will come by. Anyway, we have enough food and water for a week.’ Beth was reassuring herself, as much as me.

Part of me was confident we would be ‘saved’, but there was a niggling ‘what if?’ feeling. Neither Beth nor I could believe it. We were living out our biggest fear – breaking down in the desert. In London, we had packed the car with sixteen bottles of fruit juice and a five-gallon can of water to stop us from dying of thirst. It was a fear of the unknown. We were used to the green grass of New Zealand.

At this point, we couldn’t do much but hope. Driving along, watching intently for another vehicle, we wondered where the Landrover was now and wished we were all still together.

Beth was fanning the map to create a breeze. It made little difference to the heatwave in the Beetle. The air was slightly cooler outside the car. Yesterday we had hit a bump and the heater had hummed into life. Now the darned thing wouldn’t switch off! Sweat trickled underneath my collar and down my back, forming a wet, sticky seal with the plastic seat.

Thirty minutes. Twenty-five miles. At a quarter to one, the Beetle chugged to a standstill, the reserve tank empty. We hadn’t seen anyone for nearly two hours.

Drinking tepid fruit juice from our melamine camping mugs, we scanned the harsh landscape. We could camp the night, a few nights if need be. Lately, we had been sleeping in the car, folding the seats down into single beds. The hard surface was lumpy and uncomfortable so we’d push clothes into the holes and gaps. But it was safer than the tent. The soldiers had implanted an image we couldn’t dislodge – nomads slitting our throats by moonlight.

Food wasn’t a problem. Plenty of tins still lay under the seat: meat, soup and fruit. Twelve bottles of fruit juice remained and the water can was nearly full. Our jerry can was, of course, empty. When we plotted our mileage on the map, it had seemed unnecessary.

‘I can hear something!’ Beth’s cry spurred me into action. I leapt onto the Beetle’s running board to get a better view of the road. Sure enough, there was a white vehicle going in the same direction as us.

The Volkswagen Kombi van pulled up behind the Beetle, and we quickly related our problem to the two scruffy German chaps. Glancing appraisingly at Beth’s tight white shorts, they listened and nodded. Then they exploded.

‘You ran out? Ran out of petrol? Unglaubich! No spare can? How could you do that? This is a desert you know!’

Mumbling ‘stupid, stupid’, they led us around to the back of the Kombi, proudly overflowing with enough equipment to deal with any contingency. I tried for the usual camaraderie between overlanders and was rewarded with a humiliating lecture on ‘Being Prepared’.

Grateful for the fuel, I stayed quiet, bearing the tirade, knowing we were foolish. The Germans could spare ten litres. Not enough to make it to Kerman.

At least the next time we ran out, we’d be closer to civilisation.