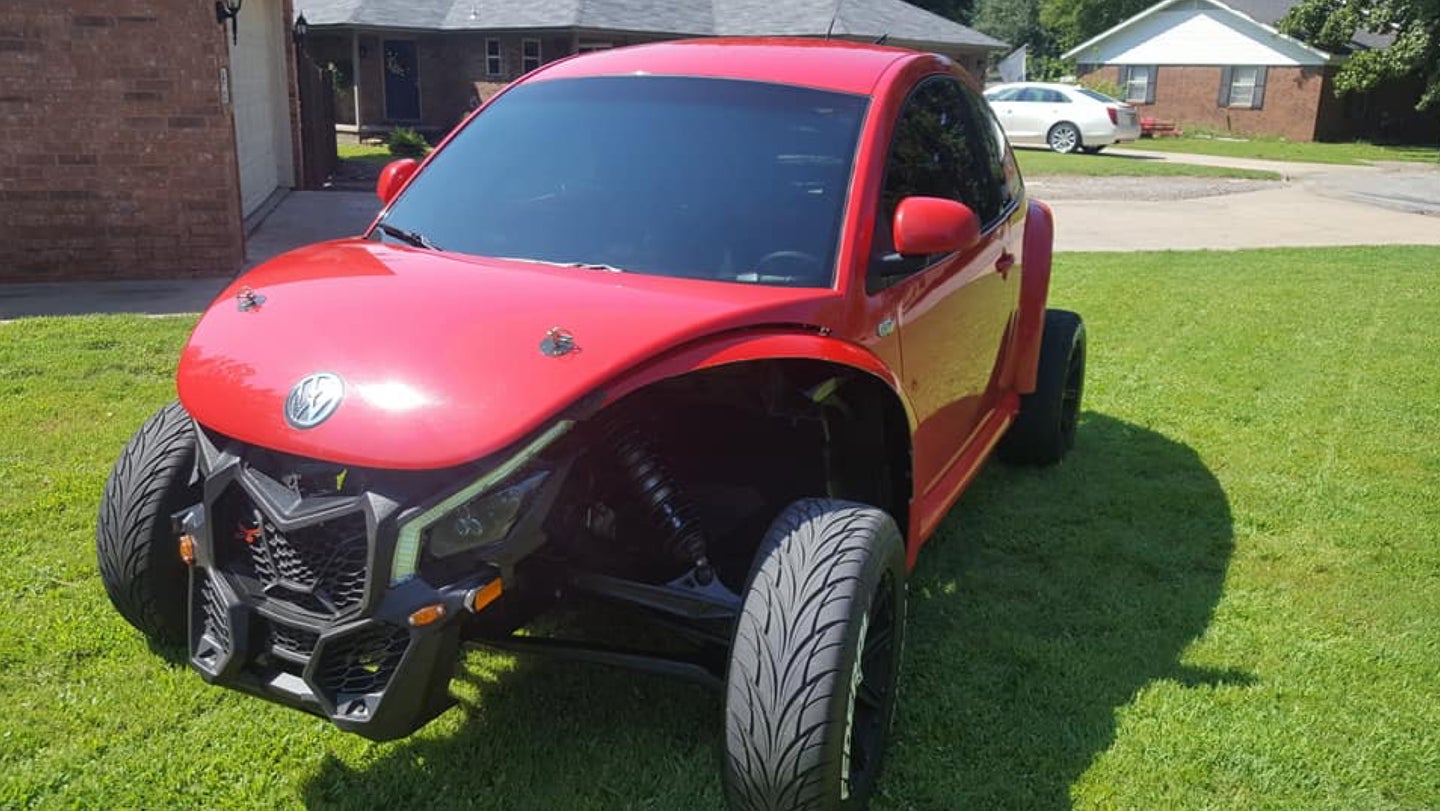 Here's a good idea we spotted for sale on Facebook: Take a 1999 Volkswagen New Beetle body, and drop it right over a 2017 Can-Am Maverick X3 XRS. To the authorities, you simply have a New Beetle, making this the ultimate hack for making one of Can-Am's most capable UTVs street-legal—not to mention more comfortable.

This conversion is apparently a thing, as YouTube's Busted Knuckle Video caught up with one such ultra-Beetle in Louisiana. Builder Andy Rick got the idea from a previous Busted Knuckle video on Fogg Motorsports' old-Beetle-bodied Polaris RZR, and figured he could do the same for his Can-Am X3.

Rick's New Beetle body was acquired for just $400, and he made sure to title and insure it before cutting it up to stick it on top of a modified Can-Am X3 chassis. An older, aircooled Beetle body would have been a bit short for the X3, but the wheelbase of the New Beetle matched up to the X3's fairly well without much work. Rick built a new roll cage for the X3 to match the New Beetle's rounded roof. It became his daily driver after that, as it features a Hot Rod air conditioning unit that runs off the X3's primary clutch.

"Everything as far as [being] street-legal works," Rick said of his creation, pointing out the windshield washer system, lights, and blinkers.

If you've always dreamed of being able to drive your UTV places without having to deal with the hassle of trailering it, but don't have the time and space to build your own as Andy Rick did, you're in luck! Rick Turner listed his New Beetle-bodied Maverick X3 XRS for sale on Facebook for a cool $28,000 (or best offer). It's a shiny red one located in Arkansas, and it even has working power windows.

This is by far one of the cleverest UTV tricks I've seen. These New Beetles keep most of the RZR controls inside intact, so it's still familiar inside. And if for some reason, you'd rather hoon around something with an enclosed cockpit, that New Beetle body has you covered—all of you.

Would you buy this unconventional off-roader?