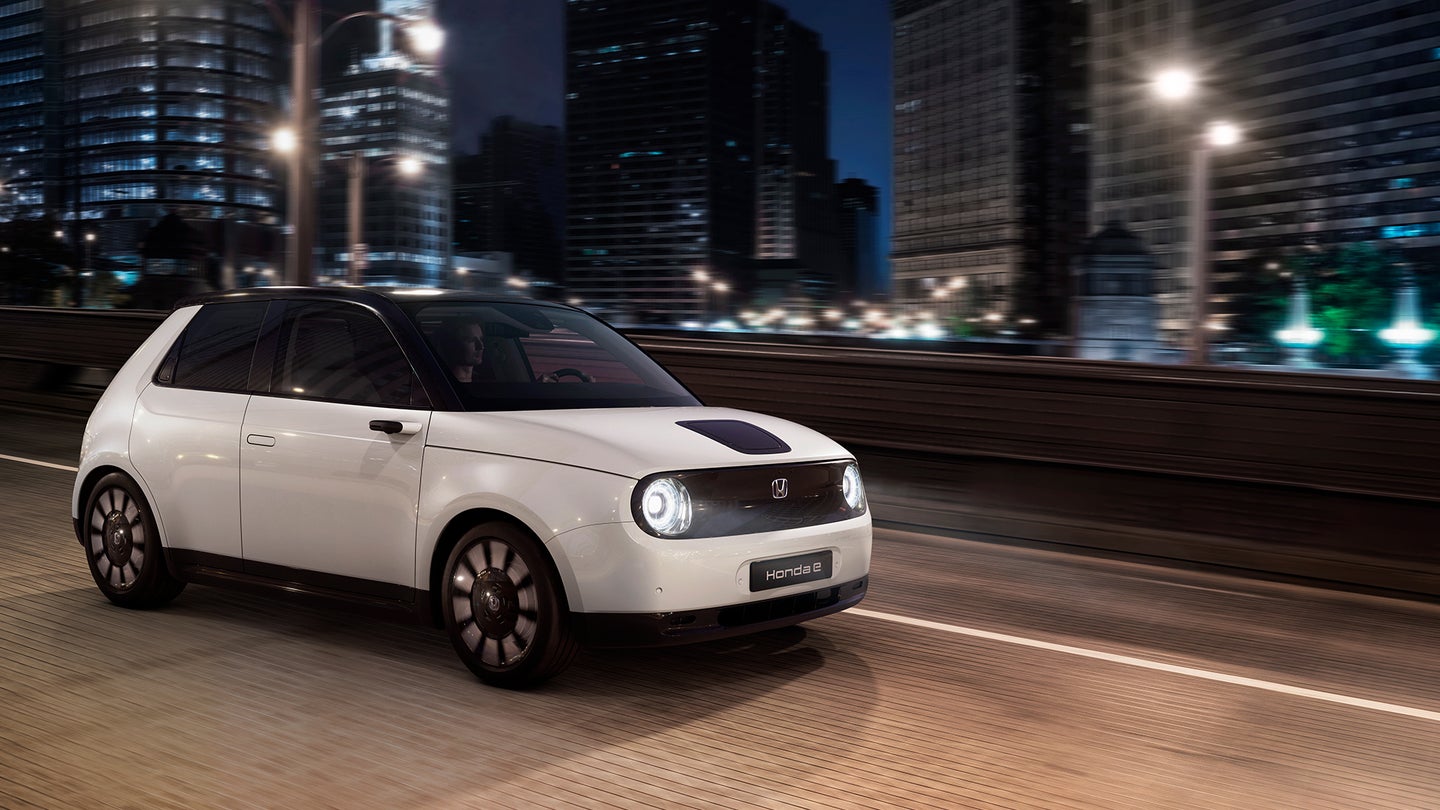 Honda's first purpose-built electric car, which is simply called the "E," has shed its wraps and it looks terrific. The adorable electric hatchback made its world debut in production guise on Wednesday, and it's definitely making us wish Honda would bring it Stateside.

Built to buzz around European and Japanese cities, the Honda E slots into the subcompact segment as a five-door, four-seater hatchback. Its throwback design resembles that of the original Civic, which Honda used to establish a foothold in the west, but features numerous elements that ground its design in 2019. LED lights, large-diameter wheels, and cameras in place of rear-view mirrors to reduce drag are things you wouldn't have seen on 1970s Civics.

The rear-view cameras feed a pair of screens that bookend a row of instruments across the E's dashboard, which easily the busiest area in an otherwise no-frills interior. Between the rear-view screens sit three additional screens, including the instrument panel and twin infotainment screens, both of which overlook a handsome wood-patterned panel. With little in the way of a center console and a rear bench seat, Honda says the E will be one of the most spacious cars in the subcompact class, and one of the safest as well, with its suite of Honda Sensing safety features.

Since there's no need to accommodate a bulky combustion engine, the Honda E indeed gains interior space by being able to use more of its wheelbase for cabin space. Everything that propels the E is crammed down and to the rear; the battery in the floor, and the single motor on the rear axle. Honda says its 35.5 kWh battery is liquid-cooled for increased range and slower degradation, and it can propel the E up to 200 kilometers (124 miles) in Normal drive mode (and presumably on the WLTP test protocol standard to Europe and Japan, the E's primary markets). Compatible connectors include Type 2 for low-wattage AC charging and CCS2 for high-wattage DC.

Throw the E into Sport mode, and it'll adjust its own suspension for better handling, which should be darned good with its low center of gravity and 50-50 weight distribution. With 148 horsepower and at least 221 pound-feet of torque exiting via the rear axle, it might even be capable of kicking its back end out.

Like the Nissan Leaf, it features a one-pedal driving mode that combines acceleration and deceleration into a single function. That feature proved, surprisingly, to be one of the current Leaf's best features. If Honda executes its own one-pedal driving mode as flawlessly as Nissan did, the Honda E might end up being the stealthiest good time on the road until its expected sportier sibling arrives on the scene.

And now for the bad news: Honda won't sell the E in the United States. It's a Europe- and Japan-only model for now and was designed to work in sprawling, yet tight cities of both regions. With as little range as it has, we can understand why Honda thinks this car wouldn't make sense in the Americas, but that doesn't mean some Americans wouldn't want to give it a shot. The OG Nissan Leaf was a success in the States with less range than that, after all, and it even gave way to a nicer and much better looking second-gen Leaf. Maybe one day, Honda?